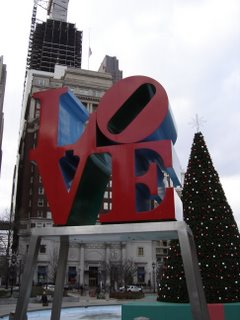 A month ago, I was invited to lead a couple of workshops in Philadelphia. It was a brief affair—two travel days plus two days in town--but the memory still burns bright.

Forget “Rocky” and the TV show “It’s Always Sunny in Philadelphia.” The City of Brotherly Love is beautiful and reminds me a lot of NYC, but without the crowds. It is, of course, also totally historic. Benjamin Franklin not only walked these streets, he’s actually buried here, too. In fact, the man is considered a god in Philadelphia, with everything from monuments to pawn shops named after him. 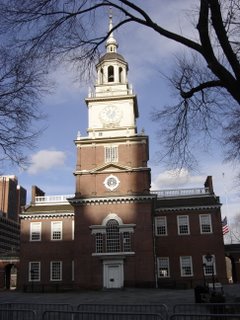 Since I had only one day to sightsee, I decided to take one of those at-your-own-pace trolley tours to get an overview of the city. My first stop was the Liberty Bell and Independence Hall, where I spent two hours reliving the birth of the USA. 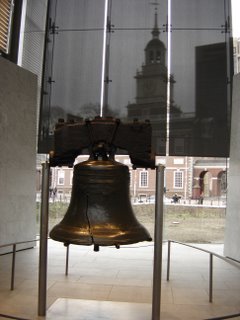 Now I’m not a religious person, but I do appreciate the sanctity of certain places and things. Every American citizen should consider these sites hallowed ground—ground that’s protected by metal detectors and security guards, but hallowed nonetheless. Indeed, the Liberty Bell, which used to be out in the open for anyone to see and touch, is now housed in a new facility where it is treated as something of a holy relic. It stands across the street from Independence Hall, where the Declaration of Independence was signed and where the Constitution—the blueprint for all democracies that have come after—was drafted. I was especially moved by the Hall’s Assembly Room, where the founders debated the future of their fledgling country behind closed curtains. Here was the actual chair where Benjamin Franklin (or was it Thomas Jefferson?) sat as the men climbed the short dais, one by one, to sign the Declaration. 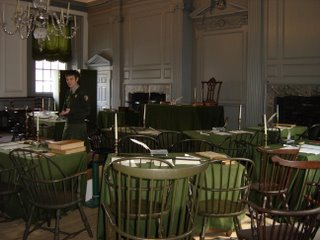 Even more moving, though, was entering Congress Hall two doors west of Independence Hall. (I had no idea that Philadelphia served as the nation’s capitol, from 1790 until 1800, while Washington D.C. was under construction). 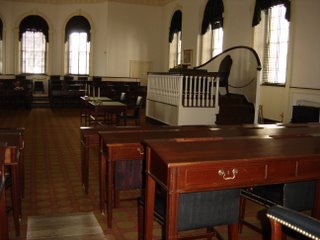 Downstairs was the House of Representatives chamber, with its nondescript wooden desks and plain white walls. Upstairs, however, was an entirely different story. 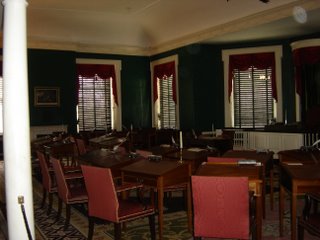 Just as it is today, the early Senate was, by far, the more prestigious of the two Congressional houses as is immediately apparent by their chamber’s lavish furnishings. Plush green wallpaper and red velvet curtains speak to the importance of the Senate’s governmental role. And there were twenty-six beautifully appointed desks, reminding everyone that the U.S. started with thirteen states (two representatives from each, as it is today). 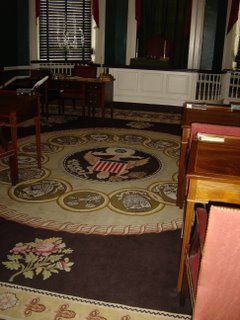 The picture (to the left) of the eagle-emblazoned carpet was taken from the exact spot where George Washington was inaugurated during his second term as president. Every student of early American history should stand in that spot. 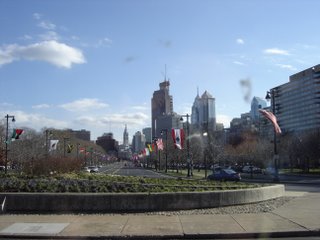 From Independence Hall, I hopped the trolley to other sights, including Betsy Ross’s house, the art museum (where Rocky made his triumphant ascent), the avenue of flags, and Society Hill. Back at Independence Hall, I decided to walk the two miles to the hotel (the temperature was in the upper 40s—a real heat spell for early January) and visit some of the sights we’d quickly driven by. I stopped in the Reading Terminal market—similar to downtown L.A.’s Grand Central, but without carnitas tacos—for lunch, and then wandered over to Macy’s (formerly Wannamaker’s), which houses one of the largest operational pipe organs in the world. 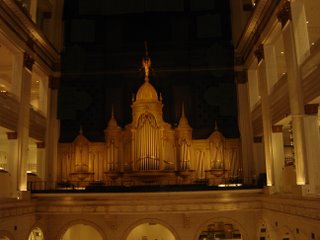 Built in 1904 for the St. Louis World’s Fair, the organ was moved in 1911 to Wannamaker’s department store, where it’s been ever since. Located above the cosmetics counters, on the second floor of a phenomenal marble-lined atrium, the two-story-tall organ entertains customers twice a day at noon and dinnertime. I missed both concerts that day, but now have a good excuse to return to Philadelphia! 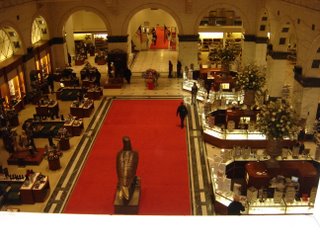 Perhaps Tim and I will take a trip back east next fall...