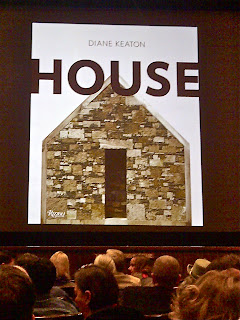 I know I’ve said this before, but one of the best things about living in L.A. is being able to see and maybe even interact with celebrities. Last night, for instance, Karen and I attended a free event at the Los Angeles County Museum Art (LACMA), featuring L.A. writer and historian D.J. Waldie, graphic designer Lorraine Wild and actress/photographer Diane Keaton, who all collaborated on a book, called House, celebrating the design of some very uncommon houses. Although the audience obviously loved architecture, I’m guessing most of us were there to see and hear Ms. Keaton, who has become a renowned interior designer in her own right. She did not disappoint. She was funny, knowledgeable, and completely enthusiastic about the amazing homes included in the book. Plus she still looked exactly like she had just stepped off the set of Annie Hall. A fun evening, though we didn't buy the book—no L.A. houses! 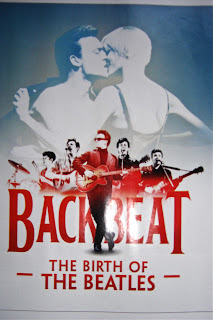 It’s no secret that I love the Beatles. So naturally it was a thrill when our season tickets to the Ahmanson Theatre included Backbeat, a play about the Beatles’ Reeperbahn days in Germany. We saw Backbeat on Sunday, opening night.

I liked the play very much, despite the actors’ sometimes indecipherable Liverpudlian accents. The story focused on the Beatles’ first—and creatively seminal—trip to Hamburg, when Pete Best and John Lennon’s best friend, Stuart Sutcliffe, were still in the band. There were some historical inaccuracies, which were duly noted in the playbill. Yet the overall plot pretty much reflected the well-documented lore of the Beatles’ beginnings, including the fabled romance between Stuart and German artist Astrid Kirchherr, who took the now famous photos of the boys in their leather jackets and James Dean hairdos. The love story was a bit too tragic, even though, by all accounts, Stu’s departure from the group and (spoiler alert!) subsequent death did cast a dark shadow on the Beatles’ origins. Nonetheless, it’s an important, if less well-known part of the group's legend.

Tim isn’t a big fan of dramatic reenactments of celebrities’ lives, but he did enjoy the post-play encore (spoiler alert #2!) when the actors treated the audience to rousing covers of “Love Me Do,” “Please Please Me” and other Beatles hits. On the train ride home, a couple sitting behind us, who were also at the Ahmanson, said they enjoyed the play, but thought the music was too loud. Yikes! Are we getting too old for the Beatles? Nah!

Backbeat is playing at the Ahmanson till March 1. I recommend it for all Beatles fans and anyone interested in their early days. 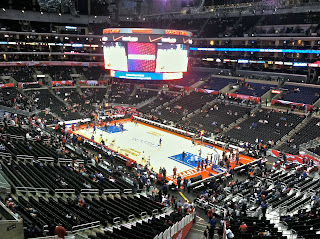 Our view of the court

I went to nearly every basketball game in high school, but didn’t become a true fan until college when I developed a crush on Don Ford, the UC Santa Barbara (my alma mater) Gauchos forward who went on to enjoy a brief career with the Lakers. In fact, the last pro basketball game I remember attending was a workout match at Loyola University, when the Lakers used to practice there in the mid-1970s.

Tim, however, loves all things sports, especially when the teams are from Los Angeles. Currently, he’s particularly infatuated with L.A.’s “other” basketball team, the Clippers, who are on a hot winning streak. So excited is he, in fact, that he snagged four tickets to last night’s Clippers game in his radio station’s corporate box at Staples Center. He immediately invited two friends to go with him and was in the process of selecting a third, when I casually asked, “Gee, can your wife go, too?”

I don’t watch basketball on TV, so Tim was stunned. Nevertheless, he invited me along. We took the lightrail downtown, ate dinner at L.A. Live, and then went across the street to Staples. We were the first ones in the box.

When the Lakers are playing, the station fills the box with all kinds of food and drink. Not so during Clippers games. If you’re hungry or thirsty you go to a concession stand, buy what you need and then bring it up. The exception is an outrageous dessert cart that is wheeled from box to box during halftime. The desserts aren’t free, but they look extremely scrumptious and so are impossible to resist. Tim had a waffle ice cream cone with sprinkles and chocolate sauce, while I munched on a huge lemon bar. Yum! 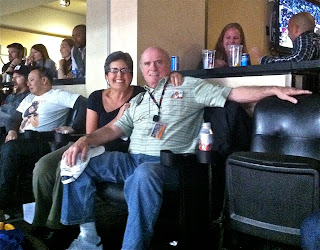 This is going to sound weird, but the game had almost a charming, naïve quality about it. Despite their superior record, the Clippers still seem like the Lakers’ poor country cousins. Their female cheer squad, called the Spirit, was less of a force than the Laker Girls, even though they found a reason to change their outfits five times! Also, the pre-game and between-quarters entertainment consisted of dance routines by high school cheerleaders and other amateurs. I clapped the loudest for a group of older women whom the announcer said were “over 30—some even in their 50s!” They looked damn good (and young) to me!

The worst part of the game? The blasting hip-hop music that dared us not to at least tap our feet. At one point, the sound guy apparently goofed and put on Hendrix’s “Crosstown Traffic” for about 30 seconds. Relieved, I yelled out, “More Jimi Hendrix, please!” But no one heard me. My ears hurt by the end of the night.

Still, the game was lots of fun, even though the Clippers slaughtered the Warriors, 115 to 89. The biggest compliment of the evening? Tim asked if I’d like to go with him to another game later this year. I said yes. 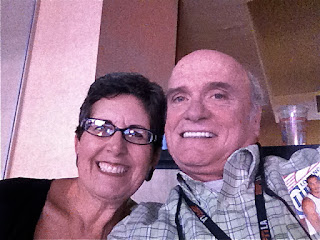 Victorious!
Posted by Cyn at 12:29 PM No comments: