The workers are now gone and the remodel done. Now all we have to do is move everything into our wonderful new cabinets and paint inside and out. Thanks to Garage Envy and Mark's Windows for doing such a terrific job! 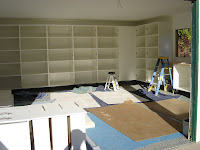 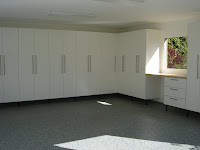 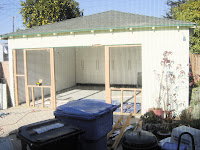 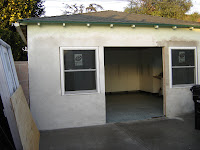 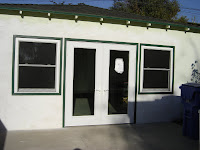 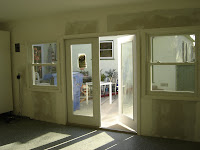 More photos in a couple of weeks when it's all done!
Posted by Cyn at 8:26 AM 1 comment: 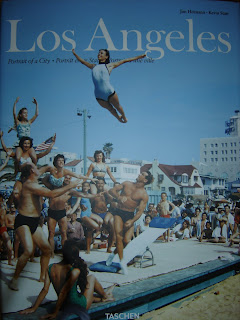 Tim and I went to a book-signing last night at the fabulous streamline-moderne Crossroads of the World, Sunset Boulevard’s earliest (1936) outdoor mall. The centerpiece was Los Angeles: Portrait of a City, a gorgeous new coffeetable book by Jim Heimann and former state librarian Kevin Starr, whom I know professionally. We were greeted by klieg lights and some 200 people dressed like they were going to an old-time movie premier; but, unfortunately, no Dr. Starr.

Still, there was plenty of other local literati to ogle, including Diane Keaton, looking very much like her alter-ego Annie Hall, Rodney Bingenheimer, former rock DJ and subject of the excellent documentary Mayor of the Sunset Strip, and Hugh Hefner, wearing a suit and sporty fedora. Hef’s entourage did a good job of shielding him from the rest of the crowd—which was just as well since he’s looking pretty old and frail these days. At one point, we saw his attractive blonde assistant (girlfriend?) yelling in his ear, “DO YOU WANT TO WAIT HERE WHILE I CALL FOR THE CAR?,” so we figured he’s also now hard-of-hearing.

Champagne and several alcoholic beverages flowed freely, but there was nothing to eat. We milled around and chatted with colleagues, who also happened to be there, while keeping our eyes peeled for hors d’oeuvres. Finally, after about an hour, a young woman walked our way carrying a tray of square food.

“What are these?” Tim asked her.

“Focaccia,” she answered, as if we were children. “It’s like bread, but with truffles on top.”

I rolled my eyes and popped one in my mouth. Tasty, but hardly a meal.

We looked at each other and started heading toward the door. No use trying to be hip when your stomach’s growling! So we grabbed our book, bid Hollywood adieu and drove straight to our favorite pizza joint in Culver City. Two slices of cheese, please!
Posted by Cyn at 1:30 PM 1 comment: 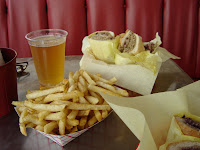 What would you do if you were spending a week in Los Angeles? Well, we started our nine-day stay-cation by eating (of course!) at The Oinkster in Eagle Rock, one of Guy Fieri’s featured “diners, drive-ins and dives.” Those are shredded pork sandwiches and twice-baked fries in the before-and-after photos—yummm-eee! 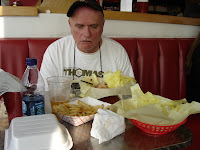 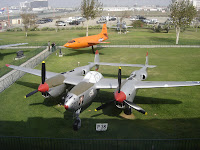 We’re all about mid-century living, so naturally we took the L.A. Conservancy’s tour celebrating the 50-year anniversary of 1960s architecture in Los Angeles. It started at the Proud Bird, a funky restaurant surrounded by old aircraft, including the orange rocket Chuck Yeager flew when he broke the sound barrier in 1947. Located on the eastern end of LAX, the Bird is the perfect spot to watch planes land while wolfing down Sunday brunch. 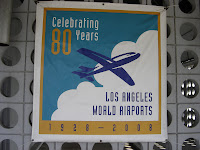 From the Proud Bird, we drove over to the Flight Path Museum, the former Imperial Terminal building where many VIPS and local sports teams board chartered airplanes. Now a free museum open five days a week, the Flight Path chronicles the history of LAX through photographs and fascinating artifacts. Most of the stewardess mannequins were dressed in their finest polyester suits and miniskirts. 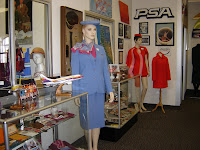 We also got to board an old DC-3 plane permanently parked behind the museum. Though we never left the ground, the thought of flying in such cramped quarters made me (relatively!) happy for today’s much larger—if less glamorous—737s. 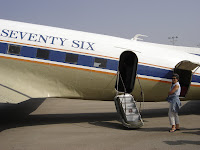 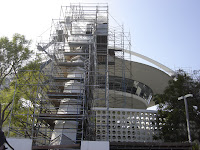 Our next stop was the Theme Building, LAX’s iconic hub that looks like something out of the space-age cartoon, The Jetsons. Turns out it was actually modeled after Martian spacecraft in the 1953 movie War of the Worlds (who knew?). Built in 1961, the Theme Building is currently undergoing renovation after a chunk of concrete fell off one its four arched legs. Retrofitting won’t be completed till next year; still, we were able to go up to the observation deck, which has been closed since 9/11. The view of the entire airport was magnificent. 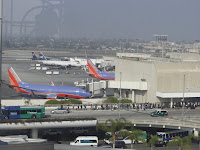 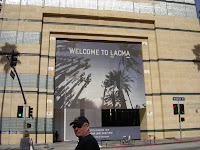 Although I’m a loyal member of the L.A. County Museum of Art (LACMA), the thought of driving up to mid-Wilshire—one of the most congested parts of the city—is sometimes just too much to bear. So it’s been a while since we’ve visited the museum. However, Tim and I were sufficiently intrigued by an exhibit celebrating the 20-year anniversary of the collapse of the Berlin Wall that we spent much of Tuesday at the museum and environs. 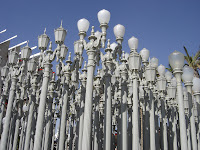 I loved the permanent display of old L.A. light standards that now greets LACMA visitors. We were also impressed by the Wall, which has been temporarily installed across the street. 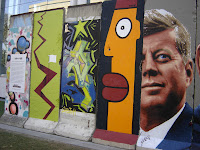 The best part of the day, though, was (finally!) getting into Mozza, possibly the best—and therefore, most popular— gourmet pizzeria in all of Los Angeles. The trick is to go at 2PM on Tuesday. But even then, it was crowded. We were lucky to snag two seats at the counter, where we watched mesmerized as the cooks assembled and baked at least 20 pizzas while we were sitting there. Very entertaining and, of course, the food was amazing.

The rest of the week

In addition to running around and eating, we also met with friends, went to two plays, caught up on tivo, and saw five movies (a new world’s record even for us): An Education, the well-acted story of a 16-year-old student who has an affair with a con artist in the early 1960s; A Serious Man, the Coen brothers’ darkly funny semi-autobiographical film about growing-up Jewish in Minnesota; 2012, the ridiculously improbable yet fun disaster movie that revels in destroying Los Angeles and the rest of the world; Fantastic Mr. Fox, a truly wonderful stop-motion film that features the voices of George Clooney and Meryl Streep; and Women in Trouble, an extremely low-budget flick, starring some of my favorite actresses from TV shows Friday Night Lights, 24, and Entourage.

It was a fabulous week and only a taste of what it will be like once we retire. Only ten more years to go!! 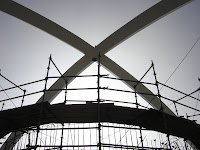 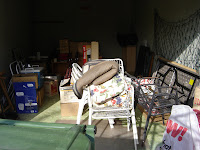 We love our 1400 sq. ft. house, but after almost 13 years living here, we’ve pretty much reached critical mass on space. The simple act of buying a new set of towels can send me into a frenzy of reorganization as I endlessly cope with inadequate cabinets and closets. Plus our office, where I spend most of the day (I work at home), is a disaster area with books and files piled all over the floor. Desperate, I began seeking a solution. I didn’t have to look very far.

Like many people, our garage has slowly become a dumping ground for every nonessential thing in our lives: old furniture that’s too good to donate to Goodwill; mementoes from deceased family members; leftover tiles and linoleum from our kitchen remodel four years ago; boxes and boxes of Christmas ornaments (I swear they’re like rabbits, reproducing on their own every year between January and November); and, of course, my extensive collection of mint-in-box action figures from several Star Trek movies and TV series (!).

To make matters worse, the original homeowners had divided the garage into two sections by building a wall down the middle. On the left was space enough for one small car (ha!); on the right, a dark, musty workbench for tools, gardening implements and countless breeds of spiders. In other words, lots of wasted — but precious — space. So we held a big yard sale and called Garage Envy for a remodeling estimate. Three weeks later, we’re in the midst of converting our useless old garage into what we hope will be an attractive den/storage area. See for yourself . . . 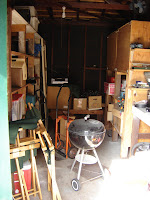 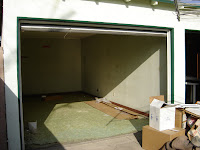 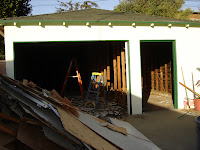 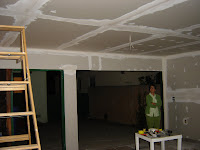 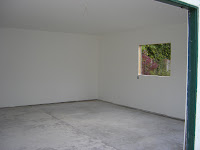 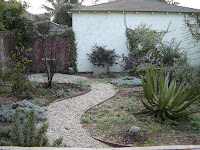