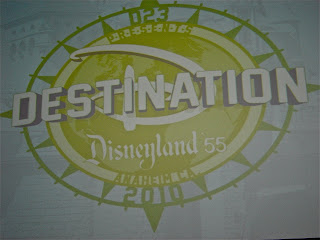 I never thought I’d be one of those people, but here I am: the older I get, the more and more nostalgic I’ve become about my childhood. Growing up next-door to our grandparents and favorite aunt, my sister Vicki and I led an exceedingly charmed childhood. Many of our fondest memories involve Disneyland, which opened just a handful of days after Vicki was born in 1955. We didn’t visit Disneyland every year, but we did go often enough to have a fairly complete mental record of almost every attraction ever featured at the park. As I’ve mentioned elsewhere on this blog, photos of Monsanto’s “House of the Future” and the long-gone submarine and flying saucer rides can easily launch me into fits of tears over the “good ol’ days” of yesteryear.

Of course, I’m not the only baby-boomer who harbors great affection for Disneyland. Last year, the Disney company finally realized there’s a gold-mine full of people my age, who still love all things Disney, and so they created D23, the only official Disney fanclub. This past weekend, D23 held the first-ever “Destination D” conference, celebrating the 55-year history of the “Happiest Place on Earth.” I bought my ticket as soon as the event was announced. 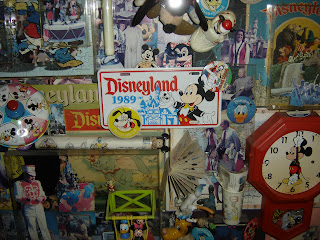 Friday morning, I donned my best Mickey Mouse tank-top and packed my fabulous Dooney & Bourke Disney handbag with the necessary conference essentials (Destination D confirmation, D23 membership card, and snacks) before heading to Anaheim. First up was Steven Clark, head of the fanclub, who welcomed all 1300 participants from 39 states and 7 countries (!). We then listened to historians talk about the early days of Disneyland, while watching rare color filmclips and old black-and-white photos.

One of the most fascinating presentations was about the 1964 NYC World’s Fair, where Disney created pavilions for four exhibitors, including Ford, Pepsi and General Electric. It was here that Walt’s “imagineering” crew premiered the audio-animatronic technology that later made possible the Pirates of the Caribbean and Haunted Mansion rides at Disneyland. To accommodate the 500,000 people visiting the World’s Fair every day, Disney also invented what I call “line technology,” i.e., providing guests with lots to look at (for example, skeletons and hieroglyphics on the Indiana Jones ride) while they wait on line. Audio-animatronics and long but entertaining lines have become Disney staples since the mid-1960s.

Friday’s real highlight, though, was the reunion of many of the surviving Mouseketeers, including Sharon, Doreen, Bobby (who looks exactly the same!), Karen, Sherry, Tommy, Cubby, and Mary. They talked about auditioning for the Mickey Mouse Club and what it was like working for Walt Disney. They also spoke most affectionately about Annette, who is now bedridden with multiple sclerosis. There wasn’t a dry eye in the place. 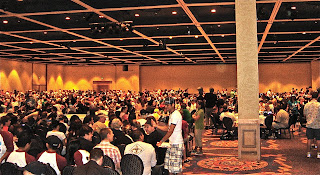 Walt originally planned to build Disneyland across from his studios in Burbank (my hometown!), but the city council rejected his proposal because they thought a theme park would bring in too much traffic.

In early Disneyland drawings, the Haunted Mansion is located on the end of Main St. instead north of New Orleans Square.

Although Walt had a clear vision for Main St., Fantasyland and Adventureland, he had a hard time conceptualizing Tomorrowland and so, at one point, considered including a uranium mine ride (yikes!!). (This was, after all, the mid-1950s during the height of the nuclear age.)

Disney didn’t own any character costumes in 1955, so they had to borrow frighteningly hideous Mickey and Minnie costumes from the local Ice Capades for the park’s grand opening.

We also got a sneak preview of some coming attractions, including the new Cars Land (scheduled to open in Disney’s California Adventure [DCA] in 2012), the Little Mermaid ride (due to open in DCA in spring 2011) and a revamped Star Tours (also opening next spring). The president of Disneyland, George Kalogridis, addressed rumors of a third park being built in Anaheim. He carefully stated that there are currently no plans for a third park, but land has been purchased if Disney decides to expand. Not surprisingly, the crowd went wild.

Overall, it was a wonderful two days filled with interesting images and information. I was most impressed by the speakers, who all work for Disney and were entertaining as well as knowledgeable. I swear the company must audition all its employees before hiring them. Many of the people on stage had started working for Disney as teenagers and were now managers and corporate heads. I was also fascinated to learn that Disney calls its attractions “shows” instead of “rides.” Everything is a performance at Disneyland. 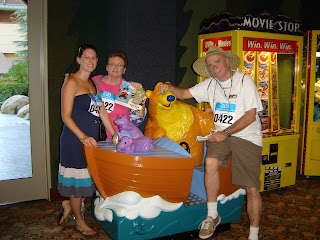 The festivities ended on Sunday with a 5-hour scavenger hunt throughout the entire Disney resort (hotels, Downtown Disney, Disneyland and DCA). Although tickets were restricted to D23 members only, each member could invite up to three people, and so Tim and our Disney-loving friends Carla and Megan (Go Team 0422!) joined me for the final leg of the conference. With more than 2000 people participating in the hunt, we had no chance of winning the $3000 grand prize. Nevertheless, we had fun searching for clues despite unseasonably hot weather. Among the easiest questions we had to answer:

“In the Paradise Pier Hotel lobby, what color are Goofy’s swim shorts?”

“How many characters are above the entrance doors of the World of Disney store?”

“Whose banner hangs next to (left of) Paul McCready’s in the entrance of Soaring Over California?”

We all agreed that we would never look at Disneyland the same again!

Back home on Sunday, I took a long nap and dreamed of the black-and-white Disneyland of my childhood. Here are Vicki (age 3) and me (age 4), waiting for the Disneyland train with our Mom and Uncle Louie. It was our first of many happy trips to what I loved to call "Dizzyland!" 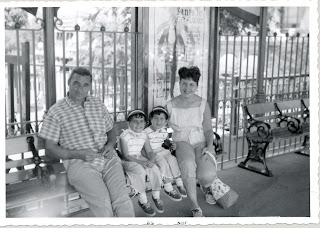 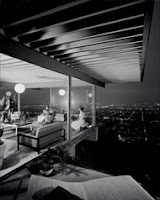 Two of the most iconic residences in Los Angeles—if not the entire world—are the Eames and Stahl houses. Part of the case study house movement instigated in 1945 by John Entenza, editor of the prestigious (but now defunct) Art & Architecture magazine, both homes embody a mid-century emphasis on inside/outside design that incorporated nature into the structure’s living space. The magazine helped defray some of the building costs in exchange for publishing rights to each home’s story. Case study houses were also required to be open to the public for thirty days before the owners moved in. The purpose was to inspire other urban dwellers to construct practical homes that reflected postwar sensibilities. Although the architects were tasked with creating replicable models, each case study house became a masterpiece unto itself, resulting in a body of work that is still worshipped by lovers of modern architecture.

We had, of course, already visited both properties as part of much larger home tours. But when I read in the L.A. Times that a small private (15 people) tour of both houses (together!) was being offered a couple of weeks ago, we quickly purchased the last two remaining tickets. Led by a fellow who works for the Eames and Stahl foundations, the tour started at the Eames house, located on a Pacific Palisades bluff overlooking the ocean. We then shuttled over to the Stahl house in the Hollywood Hills. Our small group of enthusiasts included a couple from Texas and an architect from Canada.

Built in 1948 with ready-made off-the-shelf materials, case study house #8 was home to the residence’s architects Charles and Ray Eames, world-renowned furniture makers and interior designers. Their simple two-story rectangular home and office are set on the north end of a meadow ringed in eucalyptus trees. Though we were not allowed inside, the living space was clearly visible through large windows that welcome the surrounding landscape. The large red, blue and orange panels decorating the outside of the house are immediately recognizable to anyone who has studied iconic L.A. architecture. I could easily see myself living there, surrounded by bookcases and nature.

The Eames grounds are open to the public and well worth the drive to the Palisades. For more information, click here.

Arguably the single most photographed home in Los Angeles, the Stahl house became instantly famous thanks to Julius Shulman’s black-and-white shot of two women sitting in the living room, perched precariously above a spectacular L.A. basin. Much like the Eames home, case study house #22 is simple in design and materials—an L-shaped, steel-framed building that opens onto a swimming pool—but it’s location is far more breathtaking. No rolling meadow or ring of trees here. Instead, the house is situated atop a cliff overlooking Sunset Blvd., reinforcing mid-century L.A.’s love of death-defying architecture and magnificent views. Although I could never live there (too afraid of heights), it was almost heartbreaking to leave.

The Stahl house is open periodically for day and evening “viewings.” Click here for more information. For the past several summers, Tim, Karen and I have rented a house on California's central coast. We don't go for long—usually three days—just long enough to get back in touch with our youthful selves, when we used to spend most of our adolescent summers at the beach. We usually have a specific objective—for example, visiting Hearst castle, antiquing in Cayucos, seeing the murals in Lompoc—but the one constant is always the fabulous farmer's market in San Luis Obispo (SLO).

Held every Thursday night, 6-9PM, the market is, hands down, our all-time favorite. Where else can you find fresh-cut flowers, recently picked produce, political campaigns, rock 'n roll cover bands, and lots and lots of barbecue? We're literally in hog's heaven in SLO!

As usual, we left Culver City at noon on Thursday and arrived at "our" house in Shell Beach by 3PM—just enough time to unpack, unwind, and head 11 miles up the road to SLO. We always park on the south end of the market and then meander north on foot, making mental note of the best-looking vegetable stands and barbecues. (Vendors are not allowed to sell anything until after 6:10PM.) In the past, we were perpetually on the hunt for the perfect sparerib, but last year we discovered Mo's pulled pork sandwich (YUM!) and are now hooked.

By the time we get to the northernmost end of the market, it's past 6PM and the feeding frenzy begins! Some of our favorite SLO farmer's market buys: the giant crusty bread from Guiseppe's restaurant, Marcie's pies, See's Canyon apples, and dahlias from a nameless florist. This year, we also met my long-time friend and former coworker Betty, who lives in nearby Morro Bay, at the market, making our evening doubly special. Fat and happy, we returned to Shell Beach after 2 hours.

Enjoy the sights (below) of the SLO market! 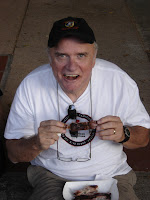