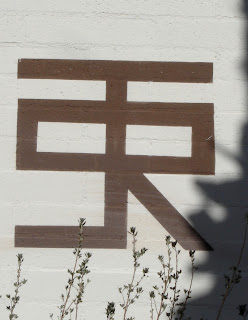 Have I mentioned lately how much I love being a member of D23, Disney’s official fan club?  Over the past three years, Tim and I have participated in many Disney screenings, conventions and tours courtesy of D23.  They’ve all been fun and special, but nothing could have prepared us for this most recent Disney adventure.

In November, D23 announced a members-only opportunity to spend three days and two nights at the Smoke Tree Ranch, an exclusive resort/residential area in Palm Springs, where Walt and Lillian Disney once lived.  Now I’m not as fascinated by Walt’s biography as other fans are; still, the thought of experiencing a part of Southern California history that remains fairly steeped in the mid-20th-century image of the old West was very appealing.  So we made our reservations as soon as possible.

Quite frankly, we didn’t know what to expect when we arrived in Palm Springs on Monday.  We knew we’d be staying in one of the Ranch cottages and eating three meals with D23ers.  We also knew that we’d get a chance to see where Walt and Lillian lived and learn how to lawn bowl, just like Walt did in the 1950s. But the rest was purposely left a mystery—the better to pleasantly surprise us! 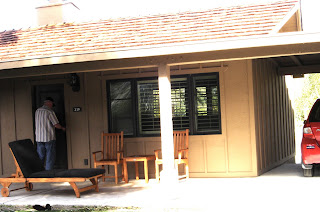 When we checked in, we were handed a map to the compound, an itinerary, keys to our cottage, and a video on the history of the Ranch.  Cocktails were being served in two hours (5:30PM), so we watched the video in our new temporary home.  We learned that Smoke Tree Ranch started as a getaway for Angelenos in the mid-1930s and eventually became a “colony” as people began building homes on the property.  Today residents live on 400 acres of prime (gated) desert land, while the guest ranch covers approximately 20 acres.  Our cottage was next to and across the road from Smoke Tree residents’ homes.  The focal point of all communal activity was the Ranch House, which also included a nearby swimming pool, three-hole practice golf course, bowling green, fitness center, tennis courts, and Walt Disney Hall, built by Walt so he could screen movies at the Ranch.

We moseyed over to the Ranch House a little after 5:30PM.  The living room was already jammed.  Before we could even enter, we had to sign waivers giving permission to film us.  I entered the living room, while Tim made his way to the open bar.

Within seconds, a familiar face came over to greet me.

“I know you!” I said, immediately recognizing the Disney Geek, who has his own video blog on the D23 website.  “How wonderful to meet you!”

We chatted about the Ranch and then after a few minutes, an older gentleman came over and introduced himself: Bob Gurr, Imagineer and master-mind behind such iconic Disneyland rides as Autopia, the Matterhorn and the Monorail.  He’s also a Disney “Legend,” the highest honor given by the company.  Bob quickly became one of our favorite people.

As soon as Tim returned, we found seats in the crowded living room and cheered as various Disney dignitaries were introduced: Oscar-winning composer (and Legend) Richard Sherman who, along with his brother Robert, wrote many of the most famous and beloved Disney songs; Tony Anselmo, the voice of Donald Duck for the past 25 years (and another Legend); Bill Farmer, the voice of Goofy since 1987 (and yet another Legend); Pete Renoudet, the voice of Henry, the emcee of Disneyland’s long-gone Bear Country Jamboree; Bill Rogers, the current voice of Disneyland (“Ladies and gentlemen, boys and girls . . .”); Bret Iwan, the current voice of Mickey Mouse; and Dave Smith, Disney Legend and recently retired company archivist.  We heard later that out of 40 people attending the three-day event, only 24 were D23 members and their guests.  Therefore, the ratio of fans to Disney dignitaries/D23 staff was almost 1:1.  We had no idea we'd be surrounded by so much Disney history and celebrity. 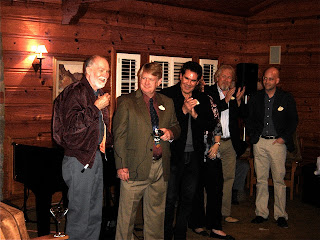 We then all headed for the dining room.  Tim and I were joined for dinner by Jeffrey, Bret Iwan, their friend Justin, and two women named Debbie, who ended up being quite the lively companions.  Salad and dessert were “self-serve” at a sumptuous buffet at the front of the room.  The main course, however, was served individually in the kitchen by the chef.  This particular tradition had started during WWII, when most of the wait-staff were off to war, and has remained part of the Ranch's casual dining culture ever since.  There was a bounty of cakes, cookies and fruit for dessert, but we had to return to the kitchen for ice cream, scooped out of containers stored in an ice cream freezer.  Delicious and fun!

After dinner, we went back into the living room, where a large piano had been set-up.  Some of the fans no doubt knew what was coming next, but Tim and I were completely surprised when it was announced that not only were we going to be part of a special Smoke Tree Ranch episode of D23's video blog  "Armchair Archivists,” but Richard Sherman was about to be interviewed and perform!  Richard reminisced about Walt Disney and invited us to join him on some of his songs.  How often do you get to sing along with the composer of “A Spoonful of Sugar” and “Supercalifragilisticexpialidocious”?  Hel-lo! Can we say "absolutely once-in-a-lifetime experience"?

“I already got my money’s worth!” I whispered to Tim as we walked back to our cottage.

The next morning we caravanned to Indian Canyon for an old-fashioned breakfast cookout, just like the Smoke Tree residents did 50 years ago.  The view of Palm Springs from the canyon was spectacular and the food perfect.  We ate family-style with Disneyland publicist and author Tim O’Day, who assured us the new Cars Land attraction at Disney’s California Adventure would be open by the end of June.  Hooray! 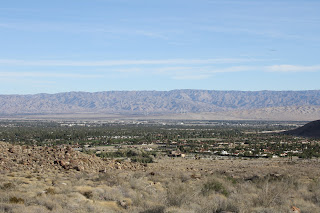 Looking down on Palm Springs 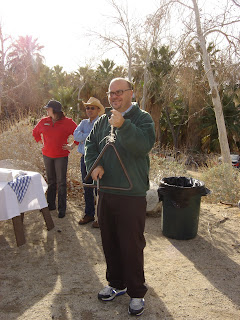 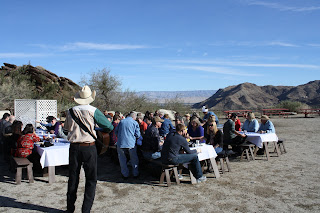 After breakfast, we all met back at the Ranch House for a tour of Walt's former homes.  He sold his first home in 1954 to help finance Disneyland, but as soon as the park started making money, he built a second house only a few tracts away.  His wife Lillian lived at the Ranch after Walt died, but eventually sold the house in 1970. 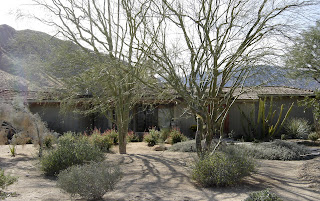 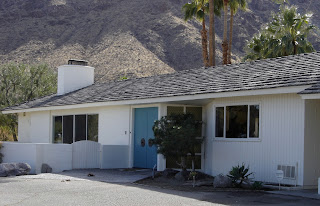 At 2PM several people gathered at the bowling green for lessons on how to lawn bowl.  I am a much better cheerleader than I am a player of any sport, so I just watched from the sidelines.  Tim teamed up with Jeffrey, retired archivist Dave Smith, and the current Disney archivist Becky Cline.  Luckily for everyone, no scores were kept! 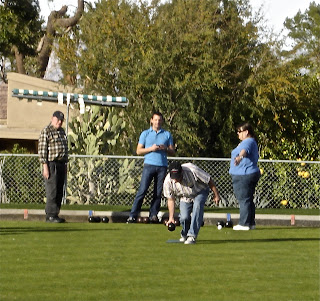 Our final dinner together was an outdoor barbecue, followed by a hilarious magic show by Dana Daniels of Disneyland’s Golden Horseshoe Review.  I warned Tim he might be picked-on if he sat close to the stage and, sure enough, he became the butt of many of Dana’s jokes.  By the end of the evening, though, Tim was everyone’s hero.  As we were leaving the hall, Bill Rogers, the voice of Disneyland, stopped us and talked with Tim at length about radio.

The night ended around a campfire, where Dana and Pete Renoudet told stories about working for Disney.  We did some western dancing (Tim was again a hit!) and sang some cowboy songs.  Then someone spontaneously launched into the Mickey Mouse Club anthem, “M-I-C (See ya real soon!) K-E-Y (Why? Because we love you!) M-O-U-S-E!” followed by Roy Rogers' “Happy Trails.”  And with that, we bid everyone a tearful adieu.  OK, so I was the only one crying; but after spending such an amazing time together, I could barely stand the idea of never seeing these folks again.  What a magical two days it had been. 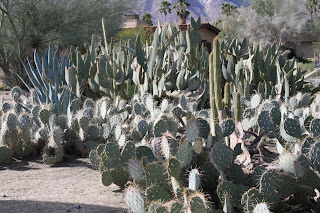 The view across the street from our cottage 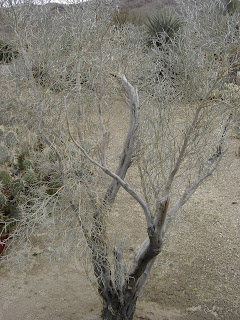 P.S.  Disney has now posted a recap of our "round-up" on its D23 website, including a video of much of what we all experienced.  That's me grabbing a taste of bacon on the breakfast line and you can see us in the middle of the audience watching Dana Daniels.  Makes me want to return to the Ranch!
Posted by Cyn at 11:52 PM 3 comments: 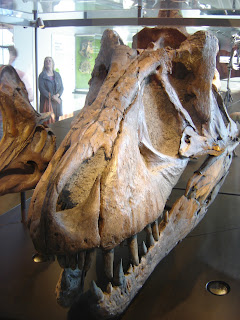 One of my absolute favorite L.A. places to visit when I was a kid was the Natural History Museum in Exposition Park.  In those days, every fourth-grader in public school took a field trip to the museum to see the dinosaur bones, followed on the same day by a visit to the La Brea Tarpits, where many an ancient animal lost their lives.

With the state’s budget the way it is, I highly doubt kids get to take field trips to the museum or tarpits any longer.  Nevertheless, the county recently renovated the entire Natural History Museum, including three new rooms dedicated to prehistoric animals.  In a definite mood for more exhibits (see yesterday’s post about the Huntington Library below), we finally made our way over to Exposition Park to spend Sunday afternoon in the fabulous new Dinosaur Hall.  To say that this is every six-year-old’s idea of heaven would be a huge understatement!  Here’s just a taste of some of the amazing fossils on display: 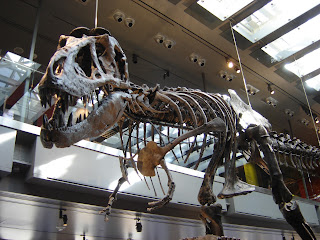 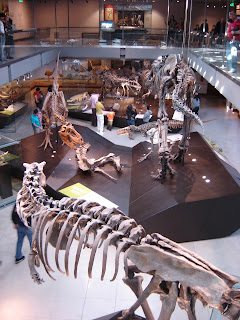 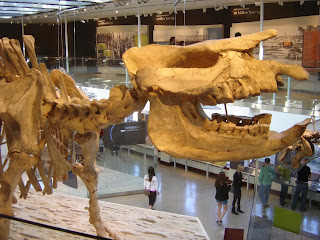 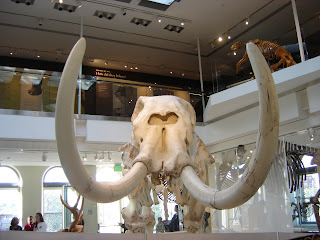 P.S.  While we were out-and-about, we also stopped by the Museum of Contemporary Art (MOCA) to see two more Pacific Standard Time exhibits: “Kenneth Anger: Icons” and “Naked Hollywood: Weegee in Los Angeles.” Anger, of course, is the underground filmmaker who also gave us the original celebrity gossip books Babylon Hollywood and Babylon Hollywood II.  But even more notorious, in his time, was tabloid photographer Weegee, who loved to capture the less glamorous side of post-WWII L.A.  Both exhibits are highly recommended if you’re into a slightly twisted view of fame in early- to mid-twentieth-century Los Angeles.
Posted by Cyn at 6:53 PM 2 comments: 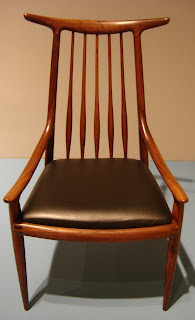 With the holidays—and a rather grueling fall academic quarter—now over, we can once again turn our attention to Pacific Standard Time, the phenomenal regionwide show of postwar Southern California art.  To make up for lost time, Tim, Karen and I schlepped out to the Huntington Library on Saturday to see two fabulous exhibits: “The House that Sam Built: Sam Maloof and Art in the Pomona Valley, 1945-1985” and the chronologically-related “Blue Sky Metropolis: The Aerospace Century in Southern California.”

Born in Chino, CA, in 1916, Sam Maloof was the first craftsperson ever to receive a MacArthur Foundation genius grant.  Although not as influential as his contemporaries Ray and Charles Eames, Maloof’s furniture is nonetheless world renowned and very emblematic of mid-century artistry.  The Huntington exhibit brings together 116 Maloof pieces, plus the complementary art of colleagues and friends who lived and worked nearby.  A sampling of the items shown follow below.  I highly recommend the exhibit, which ends January 30th, for anyone who loves mid-twentieth-century pottery, woodworking and art. 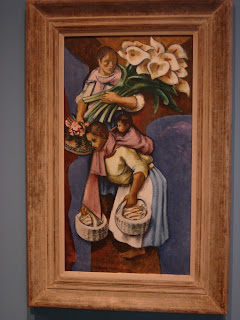 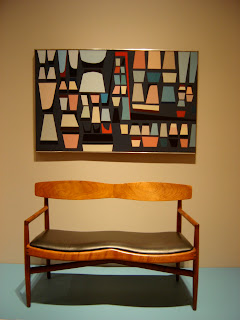 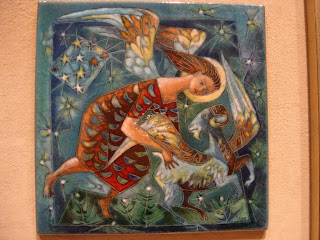 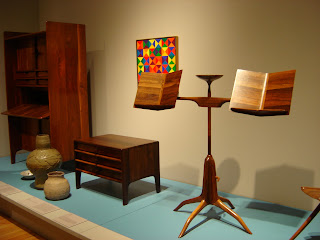 Just as impressive (for me, at least) was the aerospace exhibit which, unfortunately, ended this past weekend.  Though small, “Blue Sky Metropolis” packed a lot of fascinating info into one room.  Included were several historic photos of Lockheed and its notoriously secret Skunk Works, located just a few miles from where I grew-up in Burbank.  Historic aeronautical events that took place in Downey, close to where I worked in 1994, and, of course, Culver City, which we now call home, were also featured.  A companion book is due to be released later this year.

And, naturally, no trip to the Huntington would be complete without visiting its magnificent cactus and succulent garden.  Not much in bloom yet, but outstanding anyway. 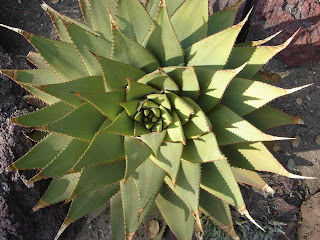 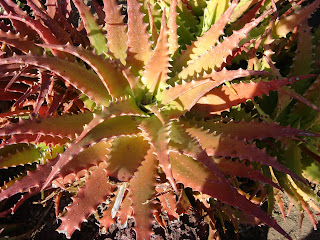 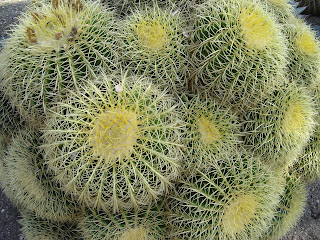 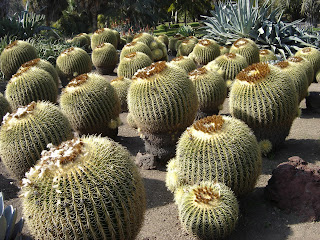