I nearly drove off the side of the road the first time I saw this billboard. There they were: the Beatles, floating above the street just three blocks from our house. Two months later, they are now ubiquitous throughout the city, inviting us to buy their music on iTunes. I love seeing them, even though they’ve become a big part of the visual noise of Los Angeles.

And speaking of the Beatles, Tim and I are in the midst of taking a (free!) five-week class called “What a Long Strange Trip It’s Been: A Review of Rock’s Greatest Decade” at the Grammy Museum downtown. I’d looked for such an opportunity for years. Still, I thought it was a risky commitment since we’ve both been students of 1960s rock-n-roll our entire lives—Tim, in fact, is currently reading Rolling Stones guitarist Keith Richards’ new autobiography. Would we know more about the topic than the instructor?

But not to worry. Robert Santelli, executive director of the Museum, is an excellent teacher and master storyteller. Not only is he our age, he’s also met and worked with many of the artists he talks about, making his classes extremely personal and fascinating. I knew we’d struck gold when, halfway through the first session, Tim leaned over and whispered, “I LOVE THIS!”

In the first class, Santelli highlighted music of the early 1960s, positing that this era is often forgotten because no one sound dominated. Sure, there were the “girl groups” and male teen idols we all watched on American Bandstand. These were also formative years for Motown and the Beach Boys. Still, no one great group or musician emerged like, say, the Beatles or Eric Clapton, so this period has been forgotten. At the end of the first session, Santelli promised to dedicate the entire next class to the single most influential songwriter of our generation.

We were, of course, both wrong. According to Santelli, Bob Dylan was the single most influential songwriter—and to hear him tell it, the single most influential human being!—of our generation. I’ve never been much of a Dylan fan (sorry Ginny!), but the lecture was illuminating, taking us through the singer’s entire career right up to last year, when Dylan joined Santelli at the White House for a concert celebrating civil rights. Exciting stuff.

Week 3 finally brought us to what Santelli calls the “1st British invasion”—the Beatles, naturally, but also early Clapton, the Animals, and groups like the Dave Clark Five. I especially liked how the instructor focused on the Beatles’ formative period in Germany—a time that I’ve always found absolutely fascinating. At one point, Santelli asked the students—some 150 of us, mostly baby-boomers—if anyone in the room had seen the Beatles in concert. A woman said she’d seen them twice: she was in the audience for their first Ed Sullivan appearance and then again at Shea Stadium. Our collective jaws dropped in pure envy.

The Beatles’ story continued in week 4 as Santelli compared the group’s (arguably) greatest album, Sgt. Pepper (1967), to the Beach Boys’ Pet Sounds (1966). Though I didn’t think so then, I now believe Pet Sounds is the far superior album and listen to its songs regularly. Sgt. Pepper, on the other hand, is fairly dated—“A Day in the Life” being the only song worth playing over and over again. Santelli then challenged us to come up with a list of the 25 most important rock songs of the ‘60s. Here are mine (in alphabetical order):

All Along the Watchtower (Jimi Hendrix)

Be My Baby (The Ronettes)

A Day in the Life (The Beatles)

For What It’s Worth (Buffalo Springfield)

God Only Knows (The Beach Boys)

I Got You Babe (Sonny and Cher)

I Heard It Through the Grapevine (Marvin Gaye)

I Saw Her Standing There (The Beatles)

Light My Fire (The Doors)

Stop! In the Name of Love (The Supremes)

I have never subscribed to the notion that a hotel room is just a place to sleep. For me, the hotel is every bit as important as the rest of the vacation. And even though I’ve never had a good trip ruined by a bad hotel, I have been on several great trips that were made even better by a wonderful hotel (the Ritz-Carlton, Kapalua anyone?).

One of our latest fave getaways is Desert Hills. One of Palm Springs’ many “boutique” hotels, Desert Hills is located at the foot of the San Jacinto mountains in a very quiet part of town. I discovered it last year when we made last minute plans to attend Modernism Week at the height of the desert tourist season. We returned this past weekend for much deserved R&R—plus I was craving sun, sun, sun. We got tons of all of the above.

The best thing about Palm Springs, of course, is that it’s only two hours away. On Friday, we waited till rush hour traffic had passed and then hopped in the car and headed east. We were eating lunch in the desert by 1:30PM.

There’s not a heckuva lot to do in P.S., but we always manage to have fun anyway. Highlights this time included a terrific Richard Avedon photography exhibit at the Art Museum within walking distance of Desert Hills. (If you ever visit the museum, be sure to go up to the third floor and look into “the tunnel,” an art piece using lights and mirrors to create the illusion of an endless hole—absolutely mesmerizing!) We also drove out to Palm Desert to see Mike Leigh’s Another Year (fabulous film). En route we spied this great neon sign advertising a do-it-yourself carwash, of all things!

The most unexpected part, though, was a World War II celebration at the Palm Springs Air Museum, certainly one of the best air museums in Southern California, if not the entire state. Two veterans shared their memories of the war, followed by an exciting air display by an authentic WWII plane. At least 200 people were there to cheer as it took off and then buzzed us three times. As thrilling as it all was, I could easily imagine how frightening it must have been to see that thing flying overhead during WWII. I wanted to run for cover!

The rest of the time we sat around the hotel: me doing crosswords (my favorite form of relaxation) while Tim read. We were completely refreshed by the time we got back home on Sunday—just the short break we needed. . . 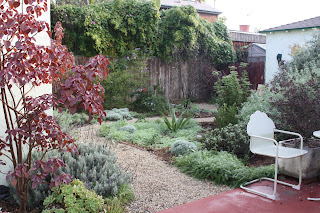 Last month's constant rain may have been annoying, but the pay-off is already evident. Although our wildflowers still haven't started to bloom, our other California natives are beginning to explode with tiny bits of color. I spent as much time as possible in our yards this past weekend. Enjoy! 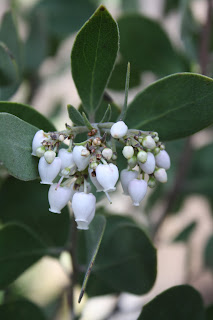 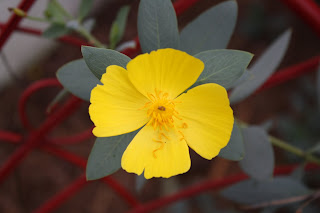 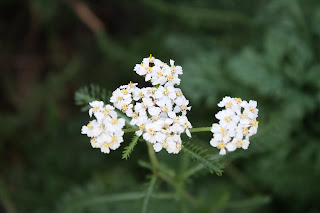 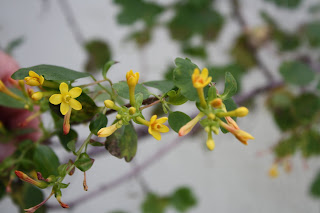 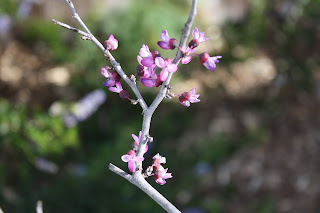 No trip to Burbank, my hometown, is complete without stopping somewhere for lunch. But where to eat on New Year’s Day when most places are closed?

We drove by Portos, our favorite Cuban bakery/deli. It was closed, as was Taste Chicago, a pizza and hot dog joint owned and operated by actor Joe Mantegna’s wife, Arlene. Next stop: Bob’s Big Boy on Riverside Dr.—one of the last remaining original Big Boys and a truly iconic piece of mid-century Americana. Bob’s was open, but had a 20-minute wait, so I put our names on the list and went to the restroom. By the time I came out, Tim had called The Smokehouse, a few blocks away. Apparently he was far hungrier than I was.

“The Smokehouse is open and there’s no waiting!” he told me as soon as I returned. “Let’s go!”

Located across the street from Warner Bros. Studios since the late 1940s, The Smokehouse remains kinda hip, even if one of its signature dishes is “Steak Sinatra” (oy!). The place is packed with Hollywood types eating lunch there during the week. No doubt, fans of The Larry Sanders Show will remember Hank Kingsley (Jeffrey Tambor) forever trying to get Larry (Garry Shandling) to go with him to The Smokehouse to drink beers and pick-up women.

For locals, however, the place has a much happier and personal meaning. This is still where families and couples go to celebrate special occasions: anniversaries, birthdays, graduations. My sister’s date took her there before one of their big high school dances many, many years ago. Lots of memories have been made at The Smokehouse.

We parked the car and followed a group of Asian tourists into the restaurant’s lobby. The lighting was dim and Frank was singing “My Way” overhead. The tourists were led into a large dining area, while we were taken to a more intimate space with banquettes and small tables. Our wide booth had smooth red leather seats. Four people speaking Russian were seated two tables away. Every so often I could hear them say something in English, like “The Godfather” or “Life is like a box of chocolates.” Ah, the global influence of American culture . . .

We were reviewing the menu (no lunch entries under $19.95) when a woman made a dramatic entrance, explaining loudly that she and her family, who were following close behind, had just come from the Rose Parade in Pasadena.

“My niece marched in a band that came all the way from Philadelphia. It took her four days to fly out because of the east coast blizzard!” she announced to the wait staff (and whoever else was listening). “We got to the parade at 4:30AM. We walked seven miles from the car to Colorado Blvd. I’m exhausted. Bring two orders of garlic bread immediately!”

Not to be outdone, a woman seated across from the parade-goers started telling her story as well. She was eating with her 85-year-old mother whose husband had died last year.

“This is our first holiday without Daddy,” she told Ms. Garlic Bread. “So we thought we’d treat ourselves to The Smokehouse on New Year’s Day! We’re having a bottle of champagne with two orders of Chateaubriand!”

Making a quick check of the menu, Tim whispered “The Chateaubriand is $30 a person!” in my ear before ordering shrimp Louie for himself. I got a Cobb salad.

By now, the music had changed from Frank to a female singer, but it was impossible to tell whether it was Eydie Gormé or Vikki Carr above all the noise the two women were making.

“Do you live in Burbank?” Chateaubriand asked Ms. Garlic Bread.

“That means they’re a lot richer than we are,” I snorted, digging into my salad. I decided then that all the world's a stage at The Smokehouse.

We ordered a big slice of cheesecake to go and then went home to watch Larry Sanders on DVD. Welcome to the new year!