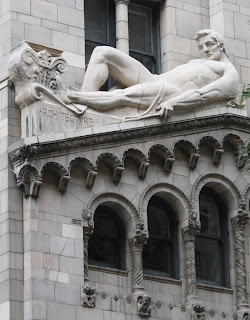 One of the most exciting on-going local developments is the revitalization of downtown L.A. Hundred-year-old buildings are turning into living spaces as more and more amenities—like a recently opened Ralph's supermarket—are introduced into the area. Downtown is becoming gentrified.
A big proponent of this conversion is the L.A. Conservancy, the organization that regularly fights for the restoration of old Los Angeles landmarks. To open residents' eyes to the beauty of the city, the Conservancy conducts several walking tours a year, featuring downtown architecture. We try to participate when we can.
On Sunday, the Conservancy offered an historical tour of 7th Street, one of the main east/west arteries downtown. As usual, we revisited some familiar spots; but mostly we marveled at buildings we had never really noticed before.
Here are just a few of the sights we enjoyed. Who says this city isn't beautiful? 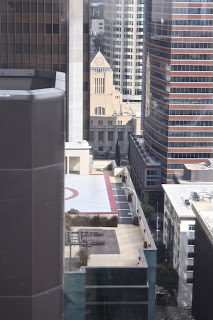 Los Angeles Public Library as viewed from atop the Sheraton Hotel 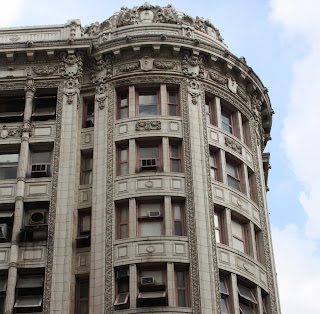 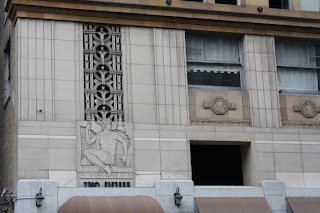 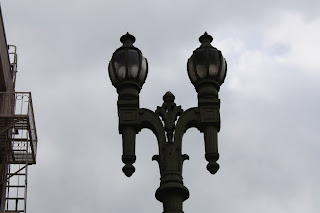 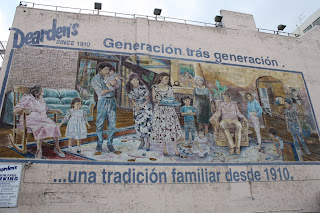 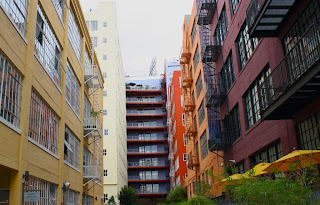 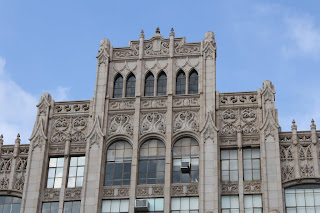 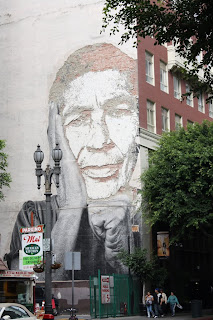 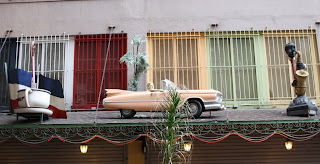 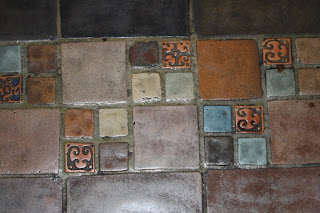 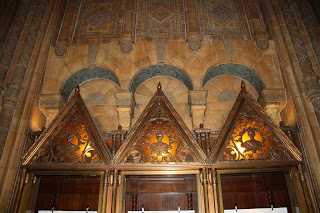 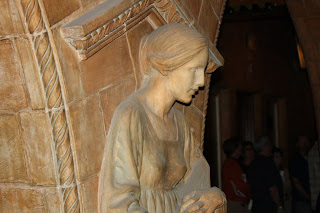 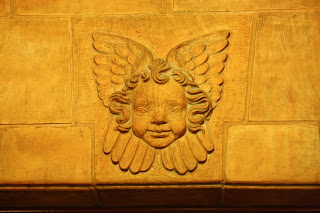 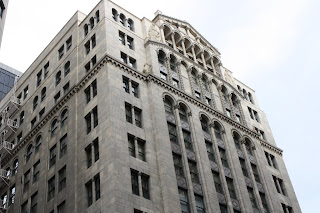 As those of you who know us know, we've been tinkering with our yards for several years now. Three years ago we tore out the backyard and planted drought-tolerent California natives. That worked so well, we did it again the following year in the front yard. Then last year we converted our garage into what realtors call a "bonus room"--that is, we now use it instead of cars.
Since the garage is no longer auto-friendly, I decided the rear concrete driveway was just wasted space and so asked our landscaper Joel to design a third garden. We quickly dubbed it "phase 3" of our ever-growing re-landscaping project. He did his magic and we now have a wonderful new garden right outside our backdoor. The concrete was demolished, but saved to create a step-stone path from the remaining driveway to the garage. The backyard was extended to the front of the garage as well and two new small gardens were planted: one along our wall and the other beneath our backdoor steps. In addition, our gate was pushed forward by 8 ft. so we can now hide the trashcans on the side of the house. The new plants (mostly natives) are still in their infant stage, but I already feel like this is how our yard and patio were always meant to be. And, oh yeah, we also bought new front and back doors and, of course, painted them red! Looks pretty good, don't ya think? 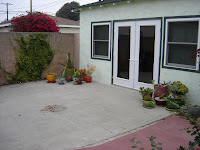 Construction (notice the white back door)

All done: the path from the driveway to the garage door

Trashcans now live on the side of the house (hooray!)

Peering through our new side fence

The backyard and patio 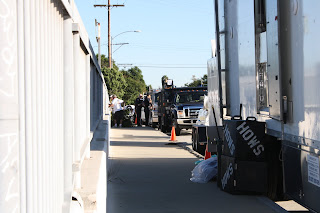 Living in Los Angeles, you get used to seeing movies and TV shows being shot all over town. A long line of “Star Waggons” parked on the street, or a brightly-colored sign attached to a lamppost, inevitably means something is being filmed nearby.

Even though we live within walking distance of Sony Studios, we’ve never seen film crews in our neighborhood—that is, until yesterday. On Monday a notice from Film L.A. was tucked into our front door, warning that an episode of Law & Order: Los Angeles (or LOLA, as we affectionately call it) was being shot the next day in Ballona Creek, the concrete “river” that runs at the end of our block. The notice promised “atmospheric smoke effects,” weapons, a “crime scene body,” “fake blood on the river bank,” and an array of film equipment. In addition, the bike path located alongside the creek would be inaccessible and street parking restricted, 6AM to midnight.

As soon as I got dressed the next morning, I looked down the street and, sure enough, orange cones were blocking the exit. I walked over to the creek to see what was going on. At the far side, I could see what looked to be a white bodybag. A crew member was picking trash out of the water—heaven forbid the rest of the country sees debris in our sad excuse of a river! Two retired motorcycle cops guarded the ends of the street bordering the creek. They were giving me the fisheye, so I went back home to work. 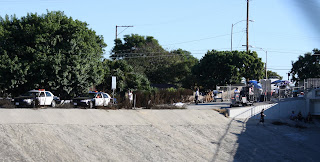 I returned a few hours later to survey the scene. Two (prop?) cop cars were parked on the other side of the creek, along with a fake county coroner’s wagon. A neighbor pulled out of her driveway and yelled my way, “Has anyone claimed the body yet?” She then sped away, laughing hysterically at her own joke. A police officer walked past, but I couldn’t tell if he was real or an “extra.” I then noticed that the gate to the bike path, which has been locked ever since we moved here, was open! Marveling at the power of Hollywood, I walked toward the gate. No one stopped me and so, for the first time in 12 years, I took the normally forbidden shortcut to the post office. 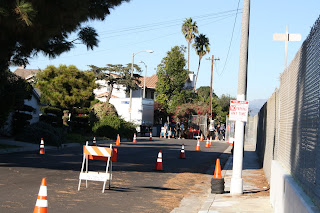 When I got back, the crew had moved to one of the houses overlooking the creek. Windows were covered in brown wrapping paper and floodlights were blazing. I looked around for the stars of the show, but didn’t see anyone famous, so kept walking home. However, I did see a bank of porta-potties standing at the end of the street. Show biz ain’t as glamorous as it used to be!

P.S. The L.A. Times also had its eye on our little TV production and so ran an article about the Ballona Creek LOLA episode in today’s Business section. According to the Times, film production in L.A. is up 22% this season, thanks to LOLA and other LA-centric shows. Good for the economy and good for those of us who remain star-struck, even if we’ve lived here most of our lives.

Be watching for the “Ballona Creek” episode to air some time in December.

UPDATE: The "Ballona Creek" episode of LOLA aired on NBC last night (11/17/10). Lots of creek scenes. I can't believe I missed all the action! You can probably catch the episode on Hulu if you missed it.