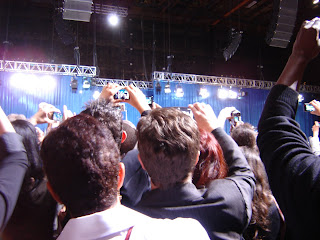 The President was in town yesterday—but not just any town, our own Culver City, where he stopped at Sony Studios to campaign for the 2012 election and rally supporters before heading to Brentwood for a big celebrity fundraiser. Those of us attending the Sony event were told to get there by 4PM. Although we live only a mile away, Tim, who came home early to avoid the nightmarish traffic that always surrounds the President’s visits, dropped me off at Veterans Park across the street from the studio. The parking lot was already filled. I joined a handful of people walking toward Sony. 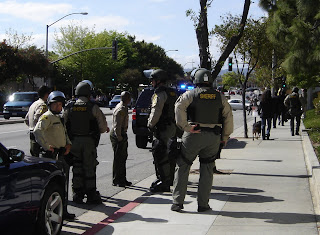 A small contingent of protesters crowded the sidewalk outside the studio gates. Sheriffs, dressed like Desert Storm troopers, stood nearby. Across the street were gawkers who, I assumed, were waiting to catch a glimpse of the President. Five military helicopters had flown over the house about an hour before, so I suspected Obama was already safely sequestered inside. 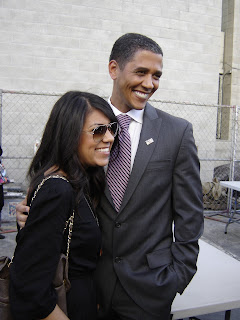 Once past the security gate, high-rollers—who actually got to meet-and-greet the President—were directed left, while the rest of us common folk joined a long line to the right. Unlike the last Obama fundraiser I attended, this one was well organized and smooth. Lots of young professionals were on line, many of whom hugged each other or shook hands as they passed. Ahead of me was cartoonist Keith Knight, who quickly made friends with a lawyer standing next to him. I didn’t see anyone I knew, but we were all stunned and amused by an Obama look-alike who happily posed for pictures! (See the photo above.)

After waiting an hour to check-in and pass through a bank of metal-detectors, we entered sound stage 30, right next to the studio entrance. (I was hoping to see more of the Sony lot!) People queued up to buy snacks and drinks, while loud disco music boomed overhead. Having attended many of these types of events, I made a beeline toward the back of the building, where I knew Obama would be speaking. I staked my spot, about 20 feet away from the raised lectern, and didn’t move for the next three hours.

Oscar-winning actor Jamie Foxx was the evening’s master of ceremonies, revving the crowd with chants of “Four more years!” and the new campaign slogan, “I’m in!” Sit-com star Rashida Jones made a brief appearance, followed by the Foshay musical choir, a group of charming young people who sang “I Want to Shine Like Barack Obama Shines,” a song they wrote specially for the occasion. Next up was a Grammy-winning folksinger, whom I liked very much but whose name I never did hear. Then finally, at 7:20PM, the President emerged to a rousing ovation.

I could barely see for all the cameras being held high, but at least this time I could actually hear what he had to say. Obama was relaxed and funny—very self-deprecating about his graying hair—and everyone loved him. Noticing a woman faint in the front row, he immediately called over the medics before continuing his speech. I clapped loudest at his comments in support of education and the environment and a reduction in military spending. In all, he spoke for half-an-hour before stopping to shake hands. Not wanting to get stuck in the building while the secret service hustled him away, I zoomed toward the door as soon as he said “good night.” Everyone was buoyant.

Outside, traffic started to back-up as Culver Blvd. was temporarily closed for the President’s motorcade. I rushed to the corner and stood with a small group waiting to see Obama drive by. Sure enough, within minutes people began to cheer as the presidential limo and an endless parade of black SUVs, including a bomb squad truck, zipped by. I waved madly and screamed. I then called Tim to come pick me up.

Walking back past Veterans Park, I overheard two teenaged boys talking about what they had just experienced. One of them ran ahead when he saw a friend approaching from the other direction.

“Rick!” he yelled excitedly. “You’ll never believe who we just saw driving by. President Obama! It was so cool!” 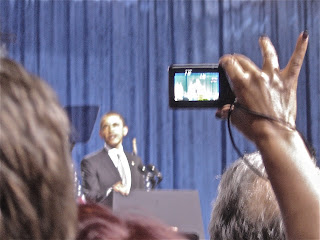 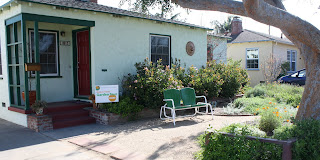 We were thrilled and honored to be invited onto the Theodore Payne Foundation’s Native Plant Garden Tour again this year. In fact, when asked which one of his clients’ houses should be included on the tour, our landscaper Joel didn’t hesitate to recommend ours. The tour was held this past Saturday. 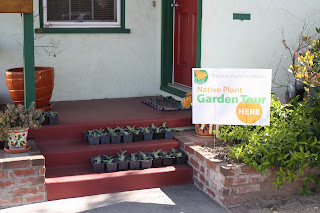 Payne not only provides signage and color-coordinated t-shirts, but also a docent or two to help manage the crowds. This year I requested our friend Marcy, whose own beautiful gardens have been featured on the tour in previous years. When our great octopus agave died last fall after producing a 15-foot stalk of blooms (see last year’s tour photos), Marcy rescued the babies, called “pups,” to pot them for a fundraiser. I’m not sure what happened, but on Saturday she showed-up schlepping 80 small potted agave plants. 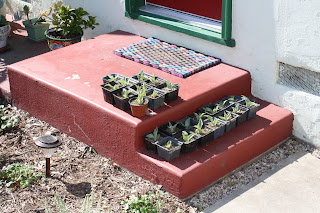 “I thought it would be fun to give them away to the people on the tour,” she offered. And she was right! We lined them up on the front and back porches with a big sign saying, “Please help yourself!” They were gone within four hours. 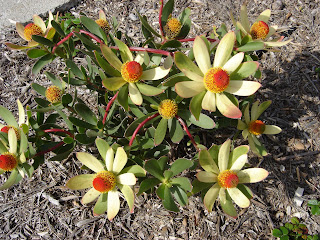 Marcy greeted people in the front yard, while Tim and I answered questions in the back. In November, we created a third garden where our rear driveway used to be. People who had been on the tour last year were very interested in seeing what we’d done. They also loved our naturally symmetrical western redbud tree and, of course, our spectacular dendromecon (Channel Island Bush Poppy), which apparently has no peers. But everyone was most fascinated by our leucadendron (pictured above)—a South African native that most had never seen. Its unusual blooms are gorgeous.

“What a beautiful sanctuary!” one woman exclaimed. Another asked if I talk to my plants.

“Of course!” I said. “Who wouldn’t? After four years, I’m still amazed every morning when I come out to see what else has bloomed.”

What a joy to be able to share such beauty with others. 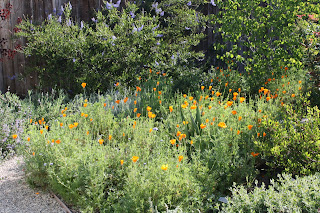 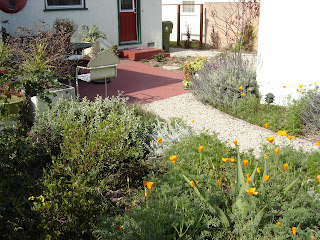 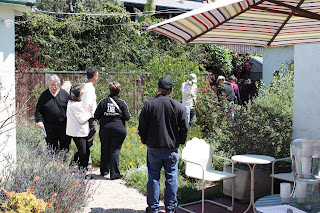 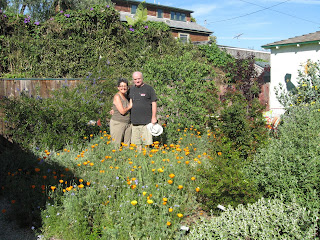