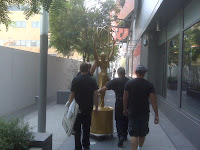 It is no secret that Tim and I love TV. In fact, if we didn’t have tivo we’d probably never leave the house at night for fear of missing our favorite television shows!

No surprise then that we were ecstatic when we heard that this year’s Emmys show was being broadcast from the Nokia Theatre in the same complex where Tim works. All week long he sent me photos of the red carpet being rolled out and bleachers set-up. We kept our fingers crossed that the red carpet would be laid right in front of his office window and, sure enough, it was! We immediately decided to watch the pre-show festivities from the 2d-floor conference room. 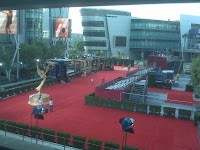 The ceremonies started at 5PM, so we left the house before 1:30PM. Traffic around the theater was a nightmare; but because Tim had wisely acquired a special parking pass (for employees only), we got waved onto streets that were otherwise closed to the public. We had to pass through several groups of guards and then wind around Israeli-style barriers into the parking lot. At the top of the stairs was a small staging area with Entertainment Tonight banners. Everyone was dressed in black and even the camerapeople were wearing tuxedos. We had obviously arrived. 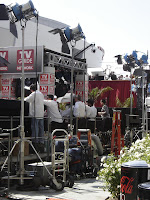 By the time we picked-up lunch-to-go downstairs, it was 2:30PM. We set-up camp in the conference room—fabulous view of the red carpet right below our feet. A few unknown women were posing for photographers before entering the theater, so I went to the staff room to eat my salad.

I was halfway through lunch when Tim yelled, “Quick, Babe. It’s Ben from Lost!” And that was that. I ran back down the hall. One of Tim’s coworkers joined us in the conference room. For the next two hours we yelled out stars’ names and debated exactly who we were seeing (several false Katherine Heigl and January Jones sightings!). I was most thrilled to see my latest hero Neil Patrick Harris, who is tonight’s master of ceremonies, and William Shatner, who skipped the photo line altogether. It was all very exciting and now I’m just counting the minutes till the show begins here at 8PM. Here are just some of the beautiful people we saw (click on each image to see better). 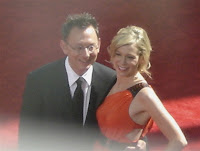 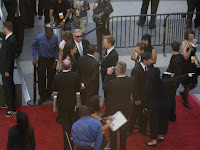 Jason Siegel (How I Met Your Mother) 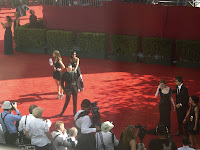 The gang from Entourage 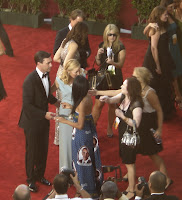 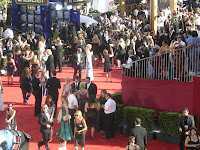 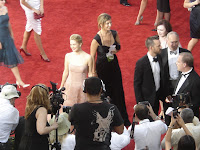 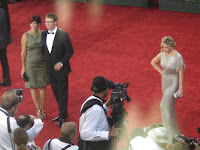 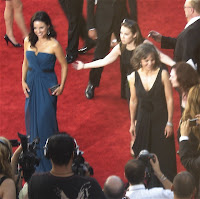 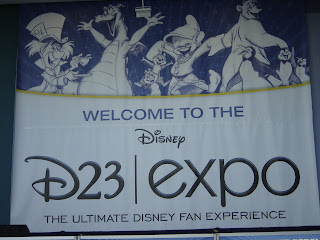 It should come as no surprise that I love almost everything related to Disney. Not only did I grow-up in Burbank, just a couple of miles from Disney Studios, but Disneyland opened just seven months after my first birthday. You might even say the park and I have grown old together, but only one of us gets regular face-lifts. (Hint: it’s not me!)

My fascination with all things Disney has only deepened since Tim went to work for the Mouse some twelve years ago. I was, therefore, ecstatic when I heard the company was finally starting an official fan club. Called D23, after the year (1923) Walt came to California to start his own studio, the club offers members insider scoops on events and, of course, special merchandise. Members also receive a beautiful quarterly magazine, Twenty-Three, which is destined to become a collector’s item.

Corporate heads also figured out the time was ripe to stage their own mini-Comic-Con and so the first-ever D23 Expo is being held this weekend in Anaheim, across the street from the Disneyland Resort. As soon as I heard about it, I became a D23 member and asked Tim to buy (hugely discounted!) employee passes to the Expo. I couldn’t convince anyone to go with me, so I took yesterday off and went by myself.

Disney CEO Bob Iger was speaking at 10AM, so I left early enough to park and saunter into the convention center. There was a handful of people walking into the exhibits area, but basically the place was pretty dead. I started to worry that the Expo was a bust and no one was going to show-up. Then I turned the corner heading to the arena and stopped dead in my tracks. Hundreds of people were waiting to get into the arena! As I found out later, many fans had arrived well before 5AM to stand on line. I knew then that the Expo was a success. But was I too late to see Iger? 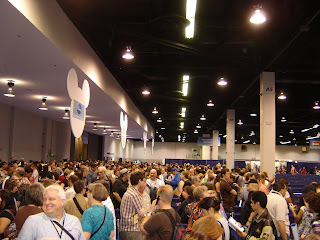 Turns out the arena holds over 4000 people, so after snaking around on a typically long Disney line, we all surrendered our cameras and cellphones and made our way inside. Despite my fear of heights, I was happy to get a seat in the balcony. A few minutes later, a short video of various Disney clips was shown on three big screens above the stage. People cheered for their favorite Disney shows and characters (everyone—including me!—screamed for Johnny Depp as both captain Jack Sparrow and the red-haired Mad Hatter, from Tim Burton’s soon-to-be-released remake of Alice in Wonderland).

Into this frenzy walked Iger, whom the crowd adored. He thanked the fans for their support and told of innovations looming on the horizon (e.g., a new attraction based on the movie Cars, being built inside Disney’s California Adventure Park). He then treated us to the first 30 minutes of the new film The Princess and the Frog, animated in the hand-drawn style of Disney’s great old movie-length cartoons. (My quick review: the first 30 minutes are terrific!) The actress who voices the princess, Anika Noni Rose, came out next and sang the theme song live. The crowd went wild!

The best part of the morning, however, was the induction of the latest “Disney Legends,” employees and celebrities alike, who have left their mark on the company. Many Disney regulars, such as Fred McMurray, Julie Andrews, Kurt Russell, and the original “Nine Old Men” animators, have been inducted over the years. But this was the first time “outsiders” were invited to participate in the festivities.

This year’s inductees included: the current voices of Goofy (Bill Farmer) and Donald Duck (Tony Anselmo); Don Iwerks, uncle to Larry Iwerks with whom I went to high school; Imagineer Leota Toombs Thomas, whose likeness is world-renowned as the Haunted Mansion’s creepy disembodied head-in-a-jar; all four Golden Girls (Bea Arthur, Estelle Getty, Rue McClanahan, and Betty White); and actor/comedian Robin Williams. The acceptance speeches, especially from White and Williams, were funny and often quite moving. As someone said afterward, “If I see nothing else today, that ceremony alone was worth the price of admission!” And she was right.

From there I jumped right into the collectibles section of the exhibits area. Now I’m a fan of most Disney films, but my real passion is Disneyland—especially the Disneyland of my childhood: the Monsanto “House of the Future,” which, I’m convinced, launched my fledgling interest in mid-century modern architecture; the “barf-buckets” (i.e., Skyway tram), which were sadly dismantled in 1994; the Rocket to the Moon, which I thought really did take us to the moon; the Flying Saucers (i.e., space-aged bumper cars, which were grounded in 1966); Dumbo; and the cups (i.e., Mad Hatter’s Tea Party). Although many of these rides have long ago been disassembled, they still spark tremendous nostalgia for me and so I’m always on the lookout for books, postcards or posters that recapture the Disneyland of yore. One guy offered an almost inescapable temptation: a seat from a Monorail train that had just been decommissioned. But, unfortunately, everything was far too “collectible” (i.e., expensive!), so I made do, quietly reliving my past by looking through boxes and boxes of other people’s memorabilia.

A screening of vintage home movies of early Disneyland was too crowded, so I roamed around the rest of the exhibits downstairs. Disney bridal dresses, vacation packages, furniture, and lots of artwork, were all being hawked by various vendors. There was also a museum-style display of props and mementos from the TV show Lost, which airs on Disney-owned ABC. Ben’s wire-rimmed glasses, Hurley’s lottery ticket, cans of Dharma Initiative food, etc.—all fun stuff for Lost fans.

Winding down, I saved the best for last: a darkened room upstairs filled with one-of-a-kind “treasures” from the Disney archives. Included here were costumes from Mary Poppins, Enchanted, Pirates of the Caribbean, and High School Musical; Annette and Cubby’s Mousketeer outfits; an 11-foot model of the Nautilus submarine from 20,000 Leagues Under the Sea; maquettes from Pinocchio; life-size robots from The Black Hole; the jewel-encrusted book from the opening scene in Sleeping Beauty; Herbie the Love Bug; and the sleigh from Babes in Toyland. It was the perfect way to end a perfectly magical day! 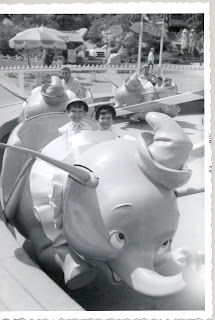