Christmas, Past and Present 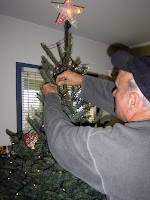 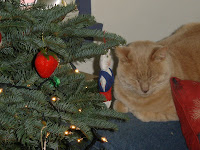 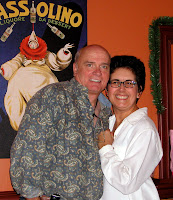 Karen called a couple weeks ago, saying she could get discount tickets for a one-night benefit performance of "You Can't Take It With You," a play starring Tom Hanks and a stellar cast of friends. I had wanted to go, but the ticket price was prohibitive. I, therefore, jumped at the chance when Karen said she could get me in for a quarter of the price. The only catch: I had to buy at least two tickets. Tim wasn't interested and Karen had to work, so I sold the second ticket to Katie, a student who lives in Northern California when not taking classes at UCLA.

The event was held at UCLA’s Royce Hall, one of the most beautiful buildings on campus. We were, of course, relegated to the balcony with all the other cheapskates. I had foolishly left my binoculars at home, so we had to strain our eyes to see any celebrities in the audience below us. We imagined seeing Ron Howard, whose production company Imagine was one the evening’s sponsors, as well as Francis Ford Coppola, who catered the post-play reception.

The play was wacky. Set during the Great Depression, it featured two lovebirds (Kunis and Hamm) who come from completely different backgrounds. Her family is extremely eccentric; his is reserved and rich. Conflict ensues when the families finally meet.

The event was billed as a “reading,” so everyone read from the script. The acting was good, even though apparently not much rehearsing went on beforehand. Annette Bening was her excellent self and Kunis and Hamm were appropriately attractive. But it was Tom Hanks who really stole the show. Wearing a tall fur cap, he played the Russian dance instructor who has opinions about everything (“IT STINKS!!”). He rarely stuck to the script and, at one point, started madly throwing chairs off the stage.

Not to be outdone, Martin Short, who played Bening’s husband, also veered from the script and several times brought the play to a screeching halt by rushing over to give Bening a long passionate kiss—all while her real-life husband, Warren Beatty, watched from the audience. Everyone screamed in delight. And then there was Bill Shatner, the play’s patriarch, who ad-libbed with the best of them. By the end, my cheeks hurt from laughing so hard!

After the applause, we ran downstairs to see if we could spot any celebrities exiting the theater. Looming above all the rest was Warren Beatty, looking exactly like he does in the movies.

“And Faye Dunaway,” she responded, as I struggled to recognize the person standing next to him.

“Hmmm . . . Faye Dunaway and Warren Beatty,” I thought to myself. “Why does that sound so familiar? Then suddenly, “Oh my God!” I yelped. “It’s Bonnie and Clyde!” What a thrill!

We followed the crowds to the patio where a champagne and dessert reception was being held. We hoped to rub elbows with some of the bigger name celebrities, but saw only James Cromwell (very tall) and Kevin Chamberlain (I still don’t know who he is!). Then, just as we were about to leave, I noticed flashbulbs going off inside the lobby. We pushed our way over to see what was happening.

I couldn’t see Hanks, Bening or Beatty, but we did have a clear view of Jon Hamm and Martin Short yucking it up about something. Actually, all we could see was the back of Hamm’s head as he laughed at Short’s antics. We stood there for several minutes and were about to give up when Hamm turned our way. We could see his face—well worth the wait!

It couldn’t get any better than that, so we left. 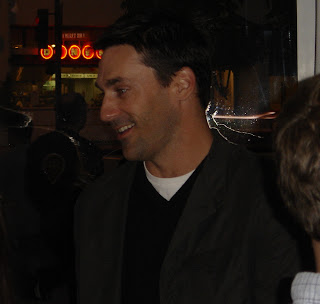