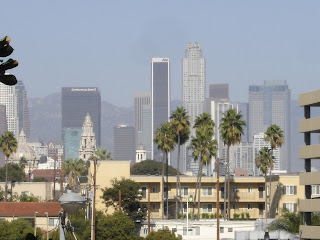 With both a master’s degree and doctorate from UCLA, I am a Bruin through and through.  Still, once a year Tim and I venture east to spend the day at UCLA’s rival university USC for the annual L.A. as Subject Archives Bazaar. Dedicated to improving the visibility, access, and preservation of archives that document Los Angeles’s rich history, L.A. as Subject is a group of archival institutions that make their holdings available through the web and other outreach efforts, like the Bazaar.  More than 80 local agencies promoted their collections last Saturday at USC.  Tim and I were completely in our element. 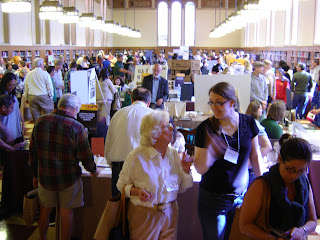 The Bazaar is always a glorious event for me, chatting with former and  current students working in various exhibit booths.  But Tim loves it, too.  A couple of years ago he found a photo of his childhood Little League team on CSU Northridge’s San Fernando Valley History Digital Library website.  This year we connected with the Museum of the San Fernando Valley and talked about possibly helping collect baby-boomer memories of the area when it was still dairy farms and remote subdivisions.  The Culver City Historical Society was also there, selling note cards and umbrellas decorated with images of Culver City.

In addition to the exhibits, the Bazaar offers guest speakers, documentary film screenings and panel discussions of local historical relevance.  We heard Christopher Hawthorne, the L.A. Times architecture critic, discuss 27 essential books about Los Angeles and were fascinated as author John Bengston showed then-and-now photos of downtown L.A., where many early silent films were shot.  Finally, we attended a session with award-winning TV producer Dan Guerrero, who reminisced about his father Lalo Guerrero, the world-famous Chicano songwriter and musician.

It was a wonderful day.  And, oh, did I mention that the Bazaar was completely free?  Yay! 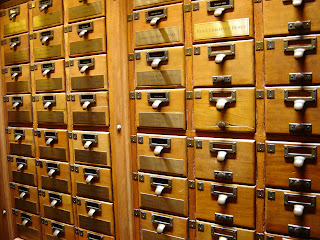 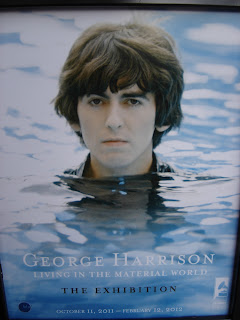 Tim was the one who called, ten years ago, to tell me George Harrison had died.  Although not completely unexpected—he had been fighting cancer for several years—the news was nonetheless devestating, especially since George was the youngest Beatle.

To celebrate George’s life and highly successful career, the Grammy Museum is currently presenting a four-month exhibition, called “George Harrision: Living in the Material World.”  It complements the fabulous Martin Scorsese-directed HBO documentary  of the same name that aired earlier this month.  The exhibit features everything from handwritten song lyrics to the jacket George wore during the famous Beatles Shea Stadium appearance in 1965, as well as postcards from the Beatles’ first trip to Germany, guitars of various shapes and colors, photos, and footage of his more notable performances, including the groundbreaking concert for Bangladesh—the first ever rock-n-roll all-star benefit—and a Traveling Wilburys video.

The Museum had mounted a similar exhibit last year, celebrating what would have been John Lennon’s 70th birthday, but somehow “Living in the Material World” is more gratifying, even though John has always been my “favorite” Beatle.  Perhaps it’s because George lived two decades longer than John and so was able to accomplish much more in his short 58 years.  Or maybe it’s because George was so spiritual.  Regardless, it’s a joyous exhibition that anyone interested in the Beatles—and/or George Harrison specifically—should see.

As we were leaving, an out-of-town couple and their young adult son stopped Tim to ask if the Museum was worth visiting.

“Are you a musician?” Tim asked the young man.  He said, yes, he plays guitar.

“Then you should absolutely go inside,” Tim advised.  “You don’t want to miss this once-in-a-lifetime opportunity.”

With that, we headed home to watch the DVD of George’s concert for Bangladesh. 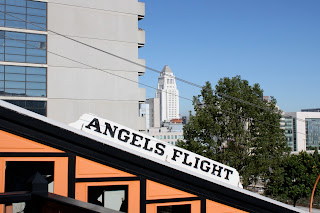 Photo Friends of LAPL not only supports development of Los Angeles Public Library’s photography collection, the group also periodically conducts events celebrating the more interesting items in that collection.  For instance, a couple months ago we attended a Photo Friends slide show of old pictures of Wilshire Blvd.  Yesterday they sponsored a lecture featuring crime photos from the long-defunct Herald Express, the Hearst publication that reveled in yellow journalism.  My favorite story was about Robert James, a 1930s serial killer who murdered his newlywed wife by sticking her foot into a box of rattlesnakes.  Criminals were certainly a lot more inventive in those days. 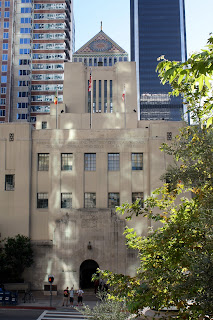 Since we were already downtown, we decided to visit some of our favorite L.A. landmarks after the lecture.  The weather was perfect: warm and slightly breezy.  It had rained on Wednesday, so the city was surprisingly clean and sparkly. 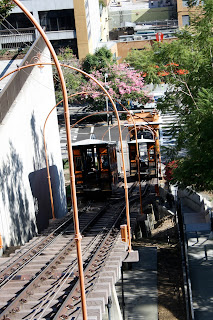 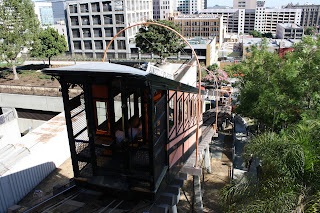 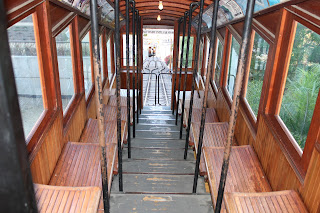 We rode the outdoor escalator, across from the library, to the top of Hope St., and then walked over to California Plaza off of Grand Ave.  After taking a few snapshots of the famous Angels Flight funicular, which is apparently the shortest operational railway in the world, we decided to take a ride down the hill to Grand Central, the oldest and largest open-air market in Los Angeles.  My mother still remembers eating there in the 1950s after watching Spanish-language movies at the Million Dollar Theater next door.  There are lots of food options at Grand Central, but we always gravitate to Tomas’s taco stand, where $2.50 will get you a taco big enough to feed two people.  Yum! 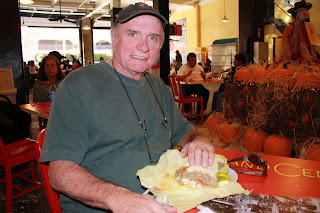 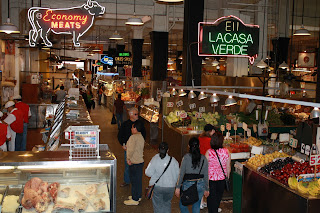 We hadn’t seen the Bradbury Building in a while, so we wandered across Broadway and went inside.  The public is welcome to visit the lobby most days until 5PM.  Constructed in 1893, the distinctive Bradbury has appeared in many TV episodes and films, including (most famously) Blade Runner.  With its black cast-iron grillwork festooning stairways, railings and elevator shafts, the Bradbury Building (hands down) has the most beautiful interior of any edifice in L.A. 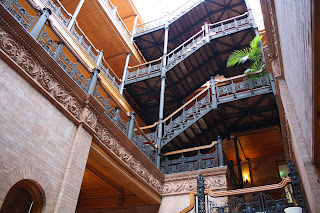 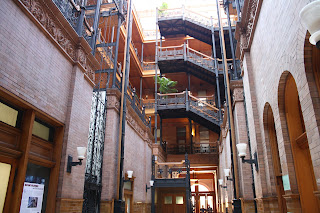 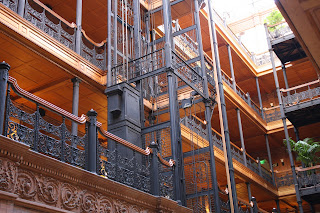 Inside the Bradbury Building

Aesthetically satiated, we rode Angels Flight up to Hope and walked back to the library, where our car was parked.  What a perfect day it had been.  That is, until we hit a traffic jam, heading south on Flower St.

“What’s with all these cars on a Saturday?” I grumped to Tim.  But then suddenly spotted film equipment.  “IT’S BATMAN!” we both yelled, noticing “Gotham City” markings on the prop vehicles parked to one side.  We'd forgotten that the new Batman movie, The Dark Knight Rises, had been shooting downtown for several weeks.

“Stop the car!  I want to take pictures,” I insisted as Tim pulled over.

Crowds of mostly young people were clogging the sidewalks, while film crews set-up the next scene.  I was most amused by the long line of nearly 30 GPD (Gotham Police Dept.) cars parked next to the 7th St. mall.  Obviously there's going to be one helluva cop car chase scene in the new movie. 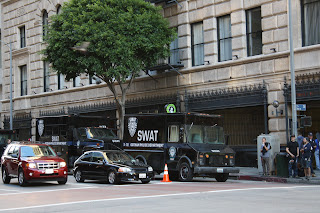 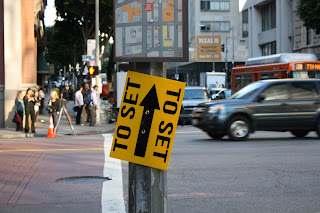 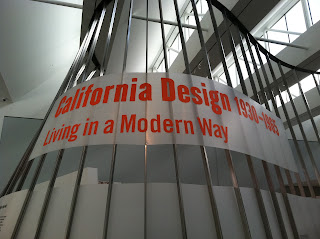 About ten years ago, the Getty Research Institute launched an initiative to study the postwar art movement in Los Angeles, 1945-1980.  Grants were awarded to art institutions throughout Southern California with the ultimate goal of mounting a massive exhibit, opening in several sites this weekend.  Over the next six months, the show, called Pacific Standard Time, will be on view in over 60 museums from Santa Barbara to San Diego.

As members of the L.A. County Museum of Art (LACMA), Tim and I got to preview LACMA’s contribution to this amazingly historic event last Thursday evening.  Focusing on mid-century west coast design, LACMA’s exhibit begins in the 1920s and ends in the late 1960s, chronicling how local art trends have influenced what we’ve come to know as the “California lifestyle.”

It’s a wonderful retrospective, examining everything from a magnificent aluminum Airstream trailer (which is the first thing visitors see) to a futuristic Studebaker Avanti automobile (midway through the exhibit), from Bauer pottery to Barbie and her “dream house” (sigh!).  The high point is the recreation of the living room from L.A.’s own Eames house, one of the most architecturally significant homes of the 20th century.  There are also lots of fabulous examples of mid-century furniture and magazine shoots of modern homes built in the 1940s and ‘50s, plus album covers, textiles, books, kitchenware, artwork, jewelry (looking surprisingly contemporary) and even swimware.  It’s enough to make one weep for the days when style was everything.

We didn’t know picture-taking was allowed (without flash, of course), so snapped these photos with Tim’s iPhone.  The LACMA exhibit runs through March 2012.  The next time I go I’ll take the good camera and shoot many more photos.  For now, here's just a tiny flavor of postwar California: 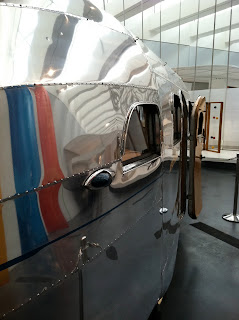 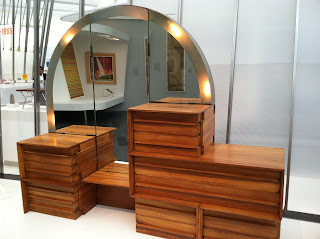 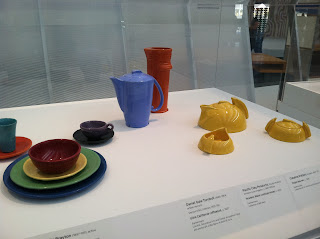 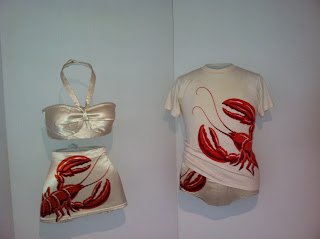 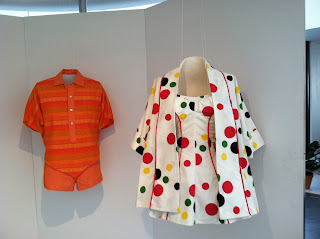 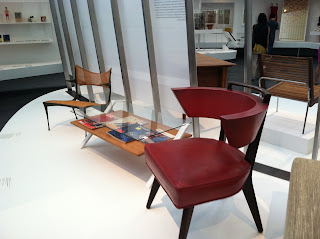 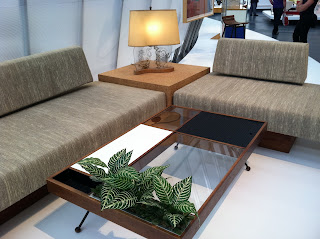 P.S.  We also recently saw the Tim Burton exhibit at LACMA, which is on till the end of October.  It's a must-see for all Burton fans.  For some reason, Burton has kept every piece of art he ever created since adolescence and it’s all displayed here.  Perhaps too much of a good thing?
Posted by Cyn at 11:10 AM No comments: