The second D23 Expo, Disney’s three-day “ultimate fan event,” was held this past weekend. No big shock that I had the dates saved on my calendar for almost a year. The first Expo, in 2009, was a fun but rather low-key affair. Not so much this year.

The doors opened at 9AM on Friday. Since I was able to easily saunter in and out of the 2009 Expo, I didn’t feel at all compelled to get up earlier than usual before heading out to Anaheim. Imagine my surprise, then, when I arrived and saw (literally) thousands of people waiting outside the convention center! I parked my car and went searching for the end of line.

I stood behind a young man, from Pasadena, who had also gone to the 2009 Expo. In front of him was a young woman from San José, CA, and behind me a 30s-ish woman and her mother, both from Sacramento. Not too many people in costumes, though we did see a Mary Poppins and two distinctly different yet credible Cruella de Vils. Almost everyone else was sporting some sort of Disney t-shirt or paraphernalia. I, of course, fit right in with my Mickey Mouse tank-top, Nightmare Before Christmas sweatshirt (stylishly tied around my waist), Mickey flip-flops, and Walt Disney World charm bracelet.

The women in front and behind us had never attended a fan convention before, so Mr. Pasadena and I scooped them in on what to expect. We also commiserated about the massive crowds, which neither of us had expected.

“Last time, I just waltzed right in without having to wait on any lines,” I groaned. “I’m afraid D23 is becoming like Comic-Con.”

After waiting more than an hour, we finally got in. I had already missed the first event of the day—a panel discussion and slideshow on the history of the Disneyland Hotel—so agreed to join Pasadena and Ms. San José on line for the Disney “Legends” induction ceremony at 11AM. All the truly big Disney names—like Julie Andrews, Dick Van Dyke, Roy E. Disney, etc.—were immortalized as “legends” years ago, so the event seems more of a publicity stunt now than an awards ceremony. Still, the audience—all 4000 of us!—were thrilled to see minor, as well as major, Disney stars. This year’s inductees included the actresses who voiced five of the most recent cartoon princesses—Jodi Benson (Ariel), Linda Larkin (Jasmine), Paige O’Hara (Belle), Anika Noni Rose (Tiana), and Lea Solonga (Fa Mulan)—Regis Philbin, and Muppets creator Jim Henson and Guy Williams (Zorro), both deceased. The arena went wild when the princesses each sang a song from their individual movies. I’m not a fan of the princess genre, but even I got a little misty-eyed, especially when I noticed the burly man in front of me wiping away tears during Paige O’Hara’s Beauty and the Beast medley. The real highlight for me, though, was seeing Kermit the Frog and Rowlf sing “Rainbow Connection,” the sentimental hit song from the original Muppets Movie. (Click here to see a video of the performance.) How many times does one get to see the Muppets perform live on stage? Never.

My new friends and I floated out of the arena, comparing notes about our favorite parts of the program. It was nearly 1:30PM.

“Do you want to get on line for the next program at 3:30PM?” Mr. Pasadena asked. Ms. San José said yes immediately, but I had other plans.

“It was great getting to know you both, but now I’ve really got to go shopping!” I declared. “Enjoy the rest of the Expo!”

And with that I ran over to the "Collectors Forum," where vendors were hawking all sorts of marvelous things. I spent the next two hours searching for Disney gold. 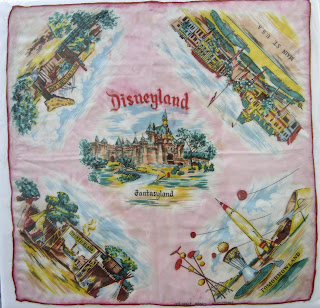 As I’ve mentioned elsewhere on this blog, the older I get the more nostalgic I am about the Disneyland of my youth, when the park seemed so much more magical than it does today. To recapture those days, I’ve begun collecting (mostly paper) items that remind me of the original Disneyland. I hit the jackpot several times over at Expo, buying (among other things!) a vintage silk scarf (pictured above) decorated with scenes of the park’s various “lands,” a brochure commemorating the long-gone Monsanto “House of the Future,” and—the pièce de résistance!—a 30” x 44” wall map of Disneyland ca. 1964, when I was just 10 years old.

I was exhausted by 4PM, but decided to see one more exhibit before going home: “Treasures of the Walt Disney Archives” displayed in a special room on the 2nd floor of the convention center. The line was 30-minutes long, but well worth the wait to see costumes and memorabilia from the Mouseketeers, Who Framed Roger Rabbit, Pirates of the Caribbean, the original Tron, the most recent Alice in Wonderland (Johnny Depp’s Mad Hatter gear!), and Lost, the popular Disney-owned TV show that ended last year. I couldn’t wait to get home and tell Tim all about it!

Tim went back with me, Saturday morning. The line was half as long as the day before. Yet well before we could even see the front door to the convention center, we heard an announcement that the first event of the day, featuring the stars (Robert Downey, Jr.! Scarlet Johansson!) and footage of upcoming Disney movies, was already full. We had just arrived and were already disappointed! This did not bode well for the rest of the day. 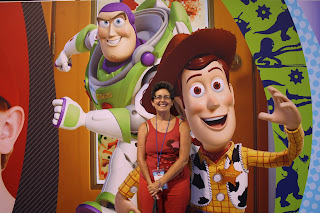 While everyone else was in the arena watching movie-clips, we strolled the vendor booths (again!) and admired artwork inspired by various Disney films. Once the program ended, however, the place turned into a mob scene. If we hadn’t already reserved a hotel room for the night, we probably would have left in disgust. 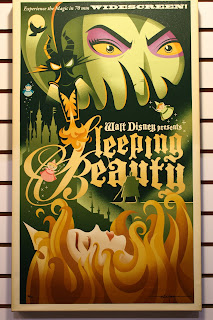 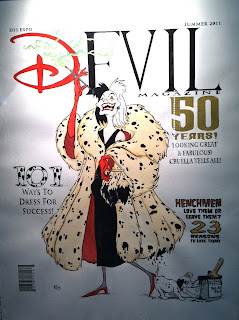 But then we discovered the D23 “charter member” lounge, a secluded room where charter members (me!) could relax and help themselves to free drinks and snacks. Rejuvenated, we decided to get on line for a presentation about the planned renovation of Disney California Adventure (DCA), the less-loved theme park located across from Disneyland. 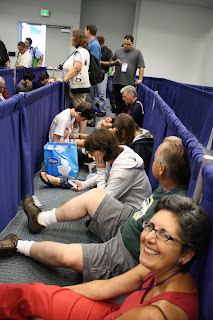 An hour-and-a-half later, we and several hundred others were directed into a large ballroom, where we oohed and aahed over artist renderings of “Buena Vista Street,” DCA’s new entrance that will incorporate iconic elements of 1920s Los Angeles (e.g., the old “red car” trolley and the much lamented Carthay Circle theater, where Walt premiered Snow White). It's going to be absolutely fabulous. 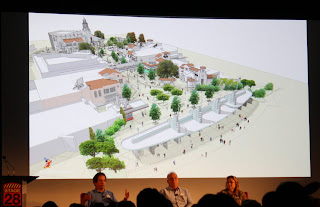 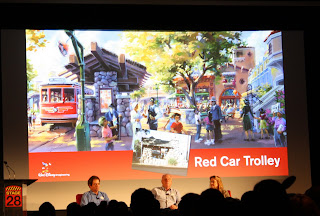 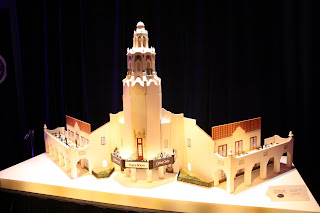 The man sitting next to me, who shared my passion for all things Disneyland, recommended that Tim and I see the enormous “Parks and Resorts” exhibit downstairs, so we ran over there after the program ended. My new friend was right! Behind a secluded wall were small displays on all the new Disney travel and amusement park features still under development. Very fun. But once again, while there, we heard a voice from above announce that the line for the 6:30PM event we wanted to attend (two hours later!) was now closed. What to do?

We decided right then to skip Expo on Sunday and instead stay up late (i.e., past 10PM) to see DCA’s “The World of Color” light show, which we’d never seen. So we checked into our hotel, took the shuttle to the parks, ate dinner at Uva, our new favorite restaurant in Downtown Disney, and then stood on line (one last time!) to catch the 10:15PM “World of Color” show. It was fantastic! 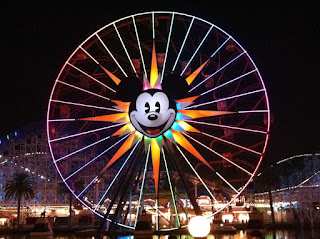 On the way out of Anaheim, we stopped for a leisurely breakfast at the LaBrea Bakery in Downtown Disney. After shopping briefly at my favorite Disney Store, I looked at my watch and noticed it was only 10:30AM.

“There’s still time to go to Expo and stand on line for the 1:30PM program on DCA’s new Cars Land ride,” I said to Tim half-jokingly.

Getting no response, I grabbed his hand and headed home. 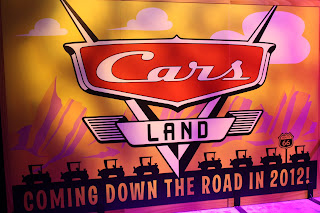