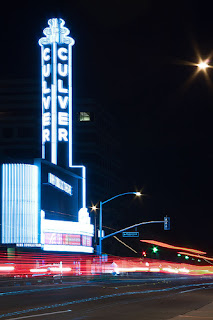 The formerly glamorous Culver Theater was a mere shell of itself when we moved here nine years ago. At one time the premier venue for showcasing movies produced by MGM Studios, located right across the street, the theater had fallen into disrepair by the early 1990s. City officials were debating what to do with the decaying relic, when actor Kirk Douglas and his wife Anne stepped up and donated over $2 million to convert the old movie house into a live theater stage. Two years later, the Culver reopened, appropriately enough, as the 300-seat Kirk Douglas Theatre, part of the Center Group theaters that include the Mark Taper and Ahmanson in downtown L.A. With its marquee encircled by blazing white neon lights, the Douglas has become a dramatic landmark in Culver City’s renovated downtown area.

I have vague memories of seeing “Gone with the Wind” at the old Culver Theater when the film was rereleased in the 1970s, so I’ve been dying to see its new interior. But I haven’t been all that excited by the plays offered there—that is, until last Wednesday when I opened the L.A. Times and saw that the Actors’ Gang was going to stage a one-time-only reading of “The Trial of the Catonsville Nine.” Set in 1968, the play features actual testimony of the nine Catholic activists who were found guilty of stealing and burning military draft records in protest of the Vietnam War. The much-celebrated Daniel Berrigan, a poet and priest who was one of the Nine, wrote the play while on the lam. Eighty-six years old, he is still active in the peace movement.

Although the reading was a fundraiser and, therefore, cost an arm-and-a-leg ($250) to attend, I decided to go because the subject matter is as timely today as it was forty years ago; plus I greatly admire the Actors’ Gang, which tends to stage progressively liberal plays that other more well-known theater troupes wouldn’t touch. Actor/activist Tim Robbins is the Gang’s artistic director.

The ticket price was a little too steep for Tim, so I went alone. I wasn’t sure what to wear to such an event, especially since I assumed the audience would be filled with rich, if progressive (!), celebrities. I settled on a new dress I had recently bought but had never worn: black cotton spandex top with a festively full skirt attached—very much the type of thing Rita Moreno would have worn in “West Side Story.” I dressed it up a bit with some jewelry, but then dressed it down by wearing nice flip-flops. I thought I had all bases covered until I got there and saw that, even though some women were as dressed up as me, most were very casual in denim skirts or jeans. I guess if you pay $250 for a theater ticket, you buy the right to dress comfortably!

The theater was intimate and still very new, but all vestiges of its previous life are now gone. In fact, this could have been any of the many recently refurbished live theaters in Los Angeles, except that this one is only 10 minutes from home and there’s plenty of free street parking. I was very disappointed.

I read later that Jeremy Piven, whom I love from HBO's "Entourage," and actress Sharon Stone were in the audience, but I didn't see them. I did recognize Marg Helgenberger, of “CSI,” seated two rows in front of me, however. (She’s much more attractive in person!). The star power on-stage more than made up for the lack of other famous people in the seats.

Starring as Daniel Berrigan was none other than Martin Sheen, president Jed Bartlet on “The West Wing” and one of my all-time favorite orators. Toward the end of the play, he gave a speech that practically brought the house down. Tim Robbins played Berrigan’s priest brother Philip, who masterminded the Catonsville incident. He also delivered an antiwar speech that completely resonated with today’s situation in Iraq.

Rounding out the cast were Neil Patrick Harris, whom I’ve loved ever since he spoofed himself in “Harold and Kumar Go to White Castle,” Camryn Manheim (late of “The Practice”), Beau Bridges, Keith Carradine, Sandra Oh (from “Grey’s Anatomy”), Mike Farrell, who had some sort of foot ailment and so did his entire performance from a wheelchair, Frances Conroy (the mother in “Six Feet Under”), Jason Ritter (late of “Joan of Arcadia”), Anthony Zerbe, who had starred in the original “Catonsville Nine” play in the late 1960s, Dakin Matthews, and Tonya Pinkins. Phew! The reading was a little rough around the edges—apparently they had little time to rehearse—but it was amazing nonetheless. The message—burning military service records to prevent the burning of children in war—was not lost on all of us who hate what George Bush is doing in Iraq.

There was a reception with the performers afterward out in the lobby. I saw people walking by with small plates filled with asparagus spears and other hors d’oeuvres. I grabbed a tasty piece of carrot cake and then quietly slipped out as the schmoozing began. Time to go home and do a little research on Daniel Berrigan and the Catonsville Nine. 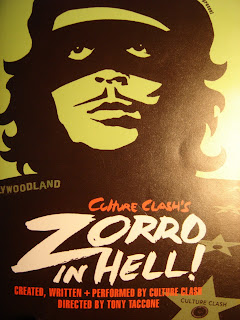 We’ve been fans of the Latino theater troupe Culture Clash since we saw their play “Bowl of Beings” in San Diego almost 20 years ago. Their humor is often irreverent, but always poignant and timely. Their last two plays, “Chavez Ravine” and “Water and Power,” did an especially terrific job of poking holes in the dark underbelly of L.A. politics. As soon as their latest play “Zorro in Hell” opened a couple of weeks ago, I got on the phone and ordered tickets.

The play is appearing at the Ricardo Montalban theater on Vine St. in Hollywood. Never quite as glamorous as the nearby Pantages, the theater—formerly called the Huntington Hartford and then the Doolittle—was saved from the wrecking ball in 1999 by the Ricardo Montalban Foundation in hopes of creating a venue for aspiring Hispanic actors. Although this potential still hasn't been truly realized, the building itself has a colorful history. I remember seeing “Equus” there when I was in college—it was the first time I had ever seen a completely naked man in person! Much more recently, the theater served as the backdrop for a Progressive Democrats fundraiser, which Tim, Karen and I attended during the 2004 presidential election. The star-studded event featured a reading of Tony Kushner’s “Only We Who Guard the Mystery Shall Be Unhappy,” a satirical work-in-progress about Laura Bush (played by Sally Field). Lots of lefty celebrities in the audience—we were in our glory.

Although not as exciting as Kushner, the play Friday night was nonetheless fun as a picture of Che Guevara, donning a Zorro mask, set the tone. The play focused on a “pocho” (non-Spanish-speaking Latino) playwright who, through a series of humorous hallucinations, gets in touch with his inner “Zorro.” (A glossary in the playbill translated key Spanish phrases for the gringos in the audience!) The play's message: it’s time to take back California from the Imperialist pigs. OK, so it wasn’t very subtle. But we did note the irony of staging an agitprop performance across the street from the future site of an opulent W Hotel currently under construction. In fact, nightshift bulldozers greeted us loudly as we left the sanctity of the theater. I’ve complained before about the encroaching gentrification of Hollywood, but maybe Culture Clash is right. It’s time we all become Zorro-istas and demand that the craziness stop. Just how much development can Los Angeles stand anyway? Que vive El Zorro! 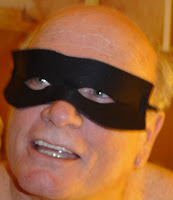