The Dodgers, Magic and Tim 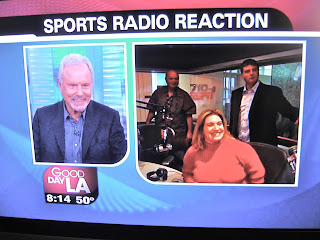 Can you find my husband in this picture?
(Hint: he's not wearing a suit)

The phone rang at 5:30AM—always a bad sign that business is far from usual at Tim’s radio station. The Dodgers announced late last night that basketball great Magic Johnson and his group of investors had been selected to buy the team, so all regular programming at the station was being pre-empted to cover the news. Tim got up and went into work an hour early.

He called two hours later. I could barely hear him over all the racket.

“It’s crazy here!” he said. Local TV stations had been interviewing the radio crew all morning and now channel 11 wanted to film a live segment from the main broadcast booth.

“I’LL SET THE TIVO!” I yelled and ran over to the television. Ten minutes later, sports radio personality Steve Mason was on the screen talking to an attractive channel 11 reporter. The phone rang.

“I’m sitting on the floor behind Steve,” Tim whispered. He’d been plugging in some equipment when the TV crew started filming, so he ducked out of the way.

But you can’t keep a good man down for long—especially one who’s never met a TV camera he didn’t like!—and so soon there he was, standing in full view of the camera at the end of the interview.

“I was trying to get out of the shot,” Tim insisted, but you decide (below). (Don't blink or you'll miss him!) 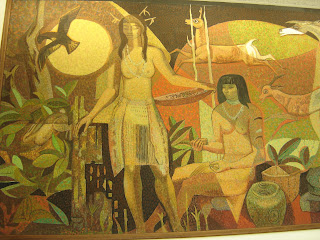 In Los Angeles, architect and artist Millard Sheets (1907-1989) is best known for designing the former Home Savings and Loan bank buildings—the once great monuments to commerce covered in marble and larger-than-life tile murals. As a kid I thought his work was rather ostentatious. Sheets has recently become something of a cause célèbre, however, as more and more of his now defunct bank buildings are threatened with demolition. On Sunday, the L.A. Conservancy celebrated Millard Sheets by hosting a tour of his art and architecture in Claremont and Pomona.

Cooped-up in the house all day Saturday because of rain, we decided to brave the weather and schlep out to the east San Gabriel valley for the tour. We could see patches of snow on the foothills as we approached Claremont. Our first stop was Scripps College, where Sheets taught and headed the arts department in the 1930s and ‘40s. His simple yet beautiful Garrison Theater, built in 1963, still stands on the west end of campus. Signature mosaics of three Shakespeare plays float above the front entrance. 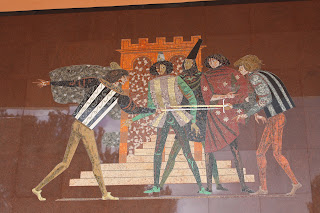 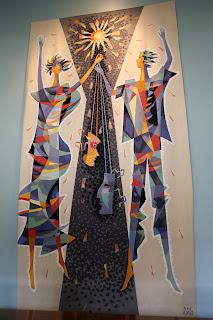 Sheets’ studio was located just a handful of blocks from campus. Now the home of Claremont Eye Associates, the complex is surprisingly compact: a small office building plus a slightly larger building that housed his working studio. Delicate mosaics of birds and Asian falconers adorn the otherwise unassuming white facades. Working with a team of artists, Sheets would paint the first draft of his tile murals on the inside wall of his two-story studio and then lay the paintings on the floor as a blueprint for placing the tiles, which were fired in a kiln out back. It was amazing to see the actual space where so much public art was created. 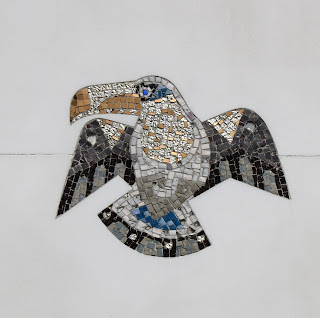 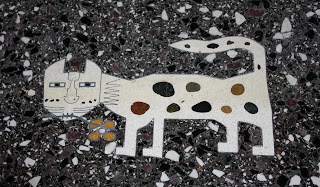 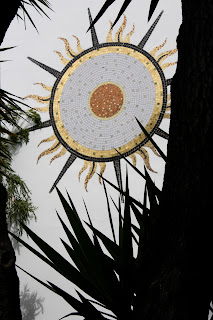 Sun mosaic peeking through the trees 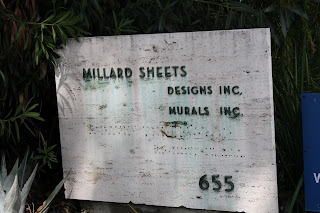 From there, we drove half-a-mile to the former Pomona First Federal (PFF) Savings and Loan on Foothill Blvd. and Indian Hill, built in 1969. Another dramatic edifice minimally decorated with mosaics. 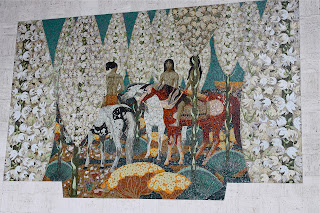 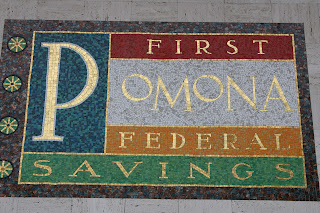 The highlight of the tour was the American Museum of Ceramic Art (AMOCA), located in Pomona in yet another former bank. Unlike its cousins, the exterior of the building is plain and almost industrial. Inside, however, hangs a magnificent 78-foot-long painted mural of the history of Pomona that was saved when AMOCA moved into the site. Although the museum’s exhibit, “Common Ground: Ceramics in Southern California 1945-1975” (part of the soon-ending Pacific Standard Time series), is fabulous, the mural alone is well worth the drive to Pomona. 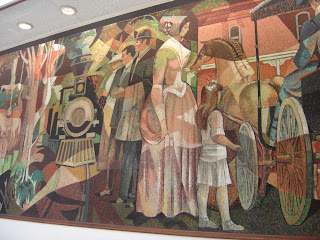 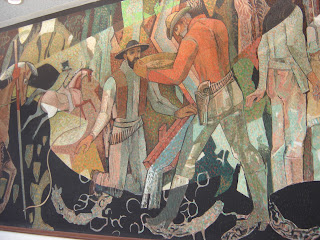 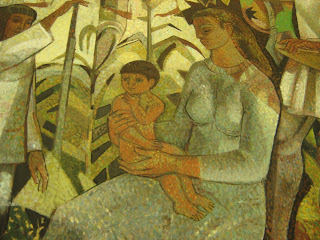 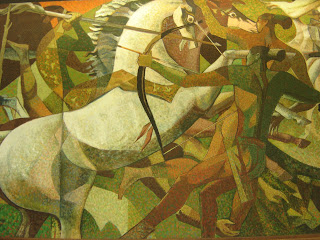 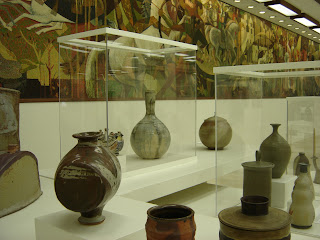 There were two more outdoor stops on the tour, but the temperature had dipped into the mid-40s by then, so we hightailed it back to Culver City, where it was somewhat warmer. And, oh yeah, I no longer think Millard Sheets’ work is ostentatious.
Posted by Cyn at 9:47 AM 2 comments: 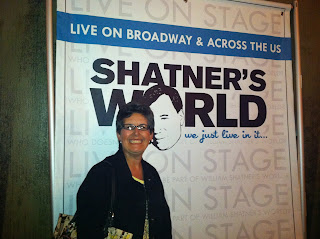 The last time we saw Bill Shatner we were sitting on lawn chairs, waiting for him to premier his Star Trek documentary, The Captains, against the mausoleum wall of the Hollywood Forever cemetery.  Since then he’s been pulling together a one-person show, called Shatner’s World—We Just Live in It, which hit the Pantages theater last weekend.

Karen was the first to read about the show on one of her theater blogs. “Shatner is performing on Broadway for two weeks in February,” she emailed me a couple of months ago.

I began moving things around on my mental calendar to accommodate a quick flight to NYC. But luckily it was soon announced that Bill would be performing in Los Angeles, for one night only, before taking his show on the road.  I immediately bought 4 tickets: 3 for Karen and us, plus one for Tim’s boss Mike, who is also a ST fan.

We arrived at the Pantages early enough to stake our spots in the lobby.  I knew if we stood there long enough, we were bound to see some of Shatner's celebrity fans. Indeed, Mike was the first to spot rock musician Joe Walsh getting refreshments. Karen recognized Mark Valley, Shatner’s Boston Legal co-star. The biggest sighting, though, was David Hasselhoff, who sat a couple of rows away from us. He looked very good in his bright green sportscoat and caused almost as much of a stir as Shatner himself. We were hoping Bill’s Boston Legal partner James Spader would appear, but if he was there we didn’t see him.

Reviews for the Broadway show were mixed—I’m guessing because they were written by non-fans who don’t really know William Shatner.  The audience Saturday night loved him, however, and gave him a standing ovation before he even said a word.  He then started what would turn out to be an almost two-hour monologue about his life and 60-year-long career.  He told lots of funny stories and screened clips from various movies and TV shows in which he had appeared, including Alexander the Great, a corny sword-and-sandals movie -of-the-week made during his early Captain Kirk days. This is also, apparently, when he developed his love of horses, a passion that continues today.

I adored the entire show and highly recommend it to anyone who is a fan and/or enjoys hearing a practiced raconteur reminisce about himself.  Nobody, after all, plays Shatner quite as well as Shatner plays himself. 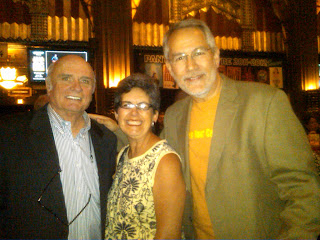 Tim, me and Mike hoping to spy celebs 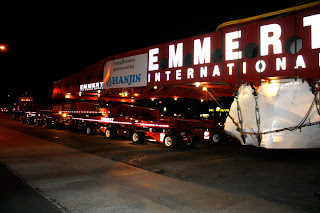 Excuse the pun, but one of the biggest news stories to hit L.A. this past week has been the transport of a 340-ton boulder as it makes its way from Riverside to the Los Angeles County Museum of Art (LACMA), where it will eventually become the centerpiece of an outdoor installation called “Levitated Mass.”  The megalith is so massive it’s being carried by a specially-designed 260-foot-long transporter that travels over surface streets, at night only, to minimize traffic congestion.  Plus the thing’s weight is distributed over some 200 truck wheels so roads won’t be destroyed as it passes.  The entire contraption is truly a modern-day marvel of engineering.


My own feeling, though, is that the giant rock’s voyage is one of the most brilliant publicity stunts of all time, as thousands of people have turned out to watch it roll by on its nightly journey and/or see it parked during the day.  Not surprisingly, we’ve been following its trek from afar with rapt interest.

Traveling at only 5 miles an hour, the boulder and its entourage finally arrived in Carson yesterday, just 20 miles from the house.  We decided we couldn’t wait any longer to see it.

Driving 20 miles can take an eternity during rush-hour on the 405 in the middle of the week, so we waited until 7:30PM to get on the freeway.  According to all reports, the rock wouldn’t start moving until after 10PM, so we had plenty of time.  Still, we were anxious to get there.  Based on the LACMA website, Tim had calculated that the boulder was parked on Avalon Blvd., two blocks south of Sepulveda.  He set his handheld GPS.  Approaching Avalon, we could see traffic lights blinking and cars grinding to a halt.

“We can walk from here,” I announced as I pulled over and parked.  Several other people, with cameras in hand, were also jumping out of their cars.  We headed toward the intersection of Sepulveda and Avalon, where we assumed the rock was parked.

“What do you mean?” I asked, gazing confusedly around.

“IT’S ON THE MOVE!” he yelled as he disappeared into a crowd of gawkers standing on the corner.

Sure enough.  Looking over everyone’s head I could see the gigantic contraction making its way north on Avalon.

“OH MY GOD.  THERE IT IS!”  I joined Tim at the front of the crowd, while he snapped pictures like mad.  A young man next to me was filming the whole thing on his phone.

The rock, wrapped in white plastic, hung suspended in the middle of its massive carrier, filling almost the entire width of the street.  Two huge trucks pulled the thing and two more pushed from behind.  We all just stood there in stunned silence as it quietly passed.  Following behind was a flotilla of smaller trucks, including one hauling a porta-potty, which brought us all out of our reverie.

And then, before we knew it, the excitement was over as we all headed back toward our cars. Turns out the rock’s road crew had encountered problems the night before and so were making up for lost time by leaving early.

“Another five minutes and we would have missed it!” Tim realized as we walked down Sepulveda.  It was only 8:20PM.

The megalith is supposed to arrive at LACMA in the wee hours, Saturday morning.  We may just have to find an excuse to go up there this weekend.  (See below) 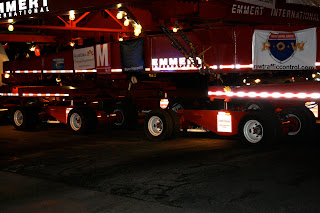 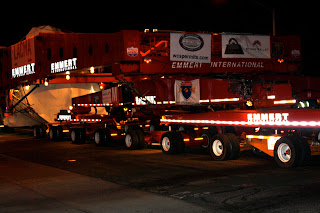 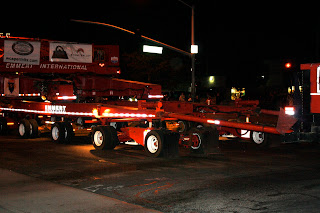 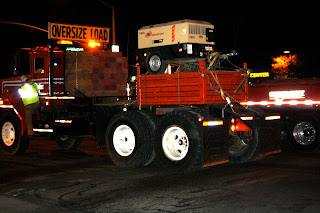 
The rock was scheduled to arrive at LACMA this morning between 2AM and 6AM. Tim promised, before going to bed, that if we woke-up early enough, we could go see it.  I sweetened the deal by suggesting we go to Du-par’s afterward for breakfast.

Tim kept his promise when the cats woke us up at 5:30AM. We immediately turned on the TV, where we saw the Channel 7 news crew standing outside the museum.  Though the boulder had already arrived, we decided to go see it anyway.  An hour later, we pulled into the parking lot across the street from LACMA.

Channel 7 reported that there had been quite a party going on when the rock arrived, but the place looked pretty much deserted by the time we got there. We started to walk up Fairfax. In the distance, we could barely see the rock, and its rig, through the museum's tarp-covered fence.

“You can get a better view on Sixth Street,” a guy told us as he looked over the fence from atop a bus-stop bench. There, on Sixth St., we found a small group of early-risers peering through holes in the tarp. Everyone was madly snapping photos. An older woman looked at me, smiling, as if to say, “Well, I see you couldn’t stay away, either!”

Though less dramatic in the daylight, the megalith—still wrapped in white—and its transporter were nonetheless impressive. You can see below how the rock rode suspended in its carrier—quite an amazing fete! Be sure to also notice the endless number of tires supporting the thing.

After sufficiently getting our eyeful, we bid the rock adieu. Du-par’s was calling! 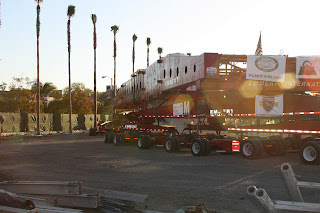 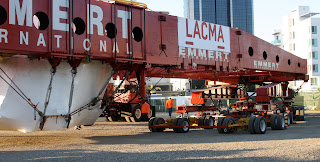 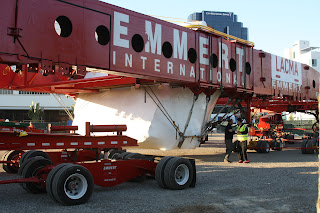 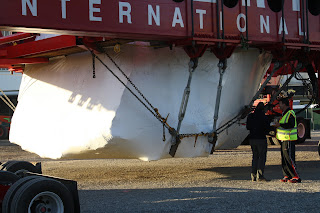