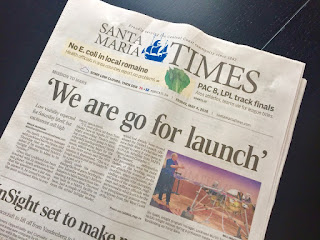 Local news outlets excited about the launch!
I have wanted to see a live rocket launch since May 5, 1961, when my 2nd-grade teacher brought her black-and-white TV to class so we students could watch the first U.S. astronaut, Alan Shepard, blast into space. Fifty-seven years later, to the day, my husband Tim and I found ourselves standing at the dark end of the Lompoc airport’s runway, waiting to watch the launch of a Mars-bound missile, called InSight, from Vandenberg Air Force Base. Although nearly 300 rockets have launched from Vandenberg since the 1950s, this one was especially historic as it was the west coast’s first interplanetary mission. I had to be there.

All Lompoc hotels were completely booked by the time I heard about the launch. So we ended up in Santa Maria, 25 miles away. Liftoff was scheduled for 4:05AM, Saturday morning. We drove up on Friday, taking a detour through Lompoc so we could scope-out the various sites NASA recommended for optimum viewing. We decided to try our luck at Lompoc's small municipal airport, which promised to open its grounds to the public at 2:30AM. We then drove north to Santa Maria, 45 minutes away.

We set the alarm for 1:15AM before hitting the hay at 8PM. Not surprisingly, I didn’t sleep much and so was wide-awake when the alarm went off five hours later. It was foggy at 1:30AM as we headed back to Lompoc. Would the launch be scrubbed because of the fog?

Once we arrived in Lompoc, we were directed to enter the airport via a street behind Walmart, which we found by following all the other cars headed toward the viewing site. We parked along one of the runways. I thought we would just stay in our car till it got closer to launch time. But no—everyone was walking toward several bright lights at the other end of the runway, so we did, too. We didn’t think to bring beach chairs (like everyone else), but we did have enough foresight to dress warmly. Last minute, I grabbed the dirty old comforter I keep in back of the car, in case of emergency—and thank goodness, because it got pretty chilly by launch time. 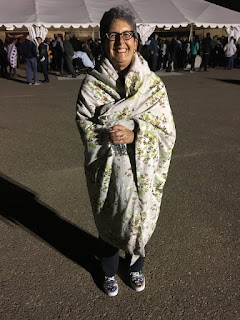 Toasty in my aunt's old comforter

The viewing area was located at the end of the airport runway, facing toward the ocean and Vandenberg, seven miles away. NASA setup a large tent filled with exhibits and selfie opportunities, while military personnel sold patches and other mementoes of the evening. A nice young man took our photo. A news cameraperson, from the local NBC affiliate, then came over and interviewed us about the launch. Leaving the tent, we both got a strong whiff of tamales. And sure enough, a man was waving us over to buy hot tamales from a cart. At 3AM! I resisted, but Tim was in his glory. 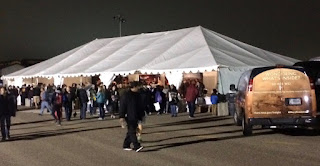 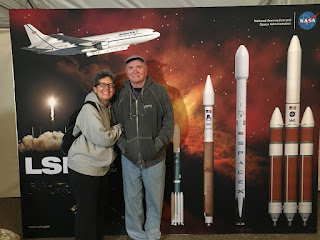 Cool exhibits
At 3:30AM, NASA began broadcasting information about the launch over a couple of speakers setup across from the tent. Hundreds of people had arrived by then and were starting to stakeout their spots at the end of the runway. Many of us worried the fog would kill the launch, but the voice over the speakers assured us the weather wasn’t an issue. We stood and waited and then at 4AM, the lights suddenly went out as we collectively held our breath.

Countdown began right on time at 4:05AM: seven, six, five, four, three, two, one, zero. Lift-off. We heard the rocket roar and felt the earth rumble. And then . . . NOTHING! We could hear the missile launching, but saw only pitch-black darkness over the ocean. Five hundred people just stood there dumb-founded, desperately searching the skies for the faintest glimmer of light. But there was nothing to see. The fog completely obscured our view. So we turned around and walked back to the car. We drove to Santa Maria in silence.

We arrived at the hotel an hour later. Guessing where we’d been, the desk clerk asked if we were able to see anything. We wagged our heads, “No.” She gave us a sad look as we headed to our room. We climbed into bed and didn’t wake-up till 10AM.

So we didn’t actually see the launch, but at least we got to share the experience with hundreds of people who had come from all over California and beyond. Plus we were on that night’s NBC news! So all was not lost.

Fingers crossed we’ll be able to go again some other
time . . .

On the news that night

The liftoff we didn't see
Posted by Cyn at 7:45 PM No comments: