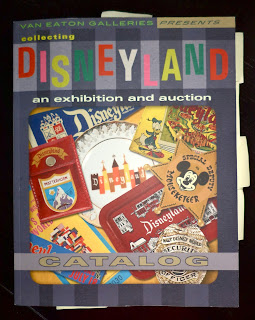 I had already decided to participate in last Saturday’s Disney auction, when an unexpected surprise arrived in the mail: a free catalog from Van Eaton Gallery, the folks conducting the auction. I had gone to their first Disney auction in February and had actually bought something, so I guess they had my number.

I immediately went through the catalog and marked items to bid on. I then checked eBay to see if I could buy the same items there for less, but no such luck. I was stuck competing with everyone else for the least expensive items in the catalog.

Tim had other things to do on Saturday, so I was on my own. I arrived early enough, but parking was restricted to only two hours along Ventura Blvd. and so had to park a mile away in a Sherman Oaks residential area. I ran into the gallery, got my paddle and barely sat down before the first gavel. Last February, the auction was held in a roomy outdoor tent. This time about 75 of us either stood or sat on uncomfortable folding chairs inside a small vacant storefront next door. The gallery did provide a nice array of food—sliced fruit, vegetables, hummus, nuts, etc.—a true godsend, since the majority of attendees were there for the duration. Heaven forbid we missed bidding on our favorite item for want of a sandwich!

It quickly became apparent who was interested in buying what. A man in the front row bought most of the badges from old Disneyland uniforms. Another scooped up all the brochures from long-gone motels that once surrounded the park. Anything related to the Haunted Mansion, Pirates of the Caribbean, or Tiki Room was popular. One man bought everything having to do with the Peter Pan ride.

With over 800 items to sell, bidding was, for the most part, fast and furious. Bids were taken over the phone, via the Internet, by absentee proxy, and, of course, in-person. I was desperate for two promotional Disneyland posters, but withdrew my paddle when Internet bids exceeded $1000. The virtual buyers seemed to have all the money. We cheered wildly whenever someone in the room won a big item.

Paper ephemera (e.g., Disneyland employee manuals, old ticket booklets, a feasibility study, etc.) were sold first. (I snuck off to the restroom during a spate of Epcot items—boring!). A maintenance manual for the It’s a Small World ride sold for $1100. We then moved on to park concept drawings. Suddenly the bidding got more heated. A sketch of a Pirates of the Caribbean character by Marc Davis, one of Disney’s most famous imagineers, sold for $4000. Another bidder bought a concept painting of New Orleans Square’s “Angels Court” for $20,000.

Posters were next—a real feeding frenzy! I was surprised the Euro Disney posters were so popular: $16,000 for an Adventureland poster and $20,000 for a French Sleeping Beauty’s castle. As someone behind me whispered, “It’s Euro Disney, for cryin’ out loud! Who cares?”

The auction then moved on to costumes and park uniforms. Not wanting to go home empty-handed, I bid against the man sitting next to me for a set of Monorail uniform buttons and was stunned when the auctioneer pointed our way at the end. “Did you win or did I?” I asked my competitor. “You did!” he laughed. I couldn’t believe my own luck. 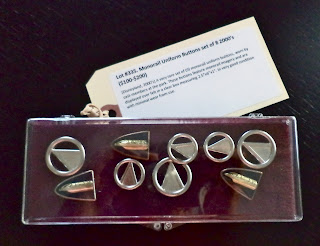 All mine: Monorail uniform buttons

From my handful of buttons, the action soon escalated to Disneyland props—i.e., actual items from the park. Who doesn’t want to own a real piece of Disneyland? A bench from Main Street sold for $27,500, while part of a popcorn cart went for $8000. The star item, however, was the PeopleMover cars that were estimated to sell for $300,000. We all held our collective breath as bidding started at $250,000 and then rapidly escalated from phone to Internet buyer. Right when it looked like the bidding was going to stop at $400,000, a phone buyer topped that offer. The final bid: $410,000! We all screamed and applauded and then held our breath again as buyers madly out-bid each other for a refurbished yellow skybucket. Though not as exorbitant, the bidding was no less frenzied as the gavel finally went down at $11,500.

A few smaller items followed before a short break was announced—our first of the day. I was amazed to discover that it was already four o’clock! Should I stay or should I go home? Another big item—a car from Space Mountain—was up next, as was an animatronic Jack Skellington head from Haunted Mansion Holiday. Plus there were all the smaller souvenir items I probably could actually afford. But I was hungry and tired, so my feet took me into the wilds of Sherman Oaks, where I hopped into my car and headed home.

P.S. When Tim and I returned to Van Eaton on Monday to pick-up my Monorail booty, we were told the Space Mountain car didn’t sell (shocking!) and that the auction continued until after 8PM. (Thank goodness I went home.) We were also advised to keep an eye peeled for another Disney auction a year from now with even more exciting stuff. I can hardly wait!
Posted by Cyn at 11:36 AM No comments: 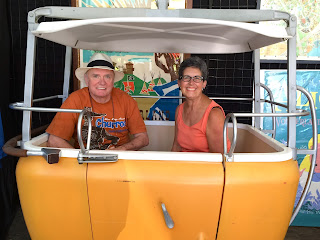 Up for auction: Disneyland sky-bucket

We spent a good part of Halloween Day in Sherman Oaks at the Van Eaton Galleries, where a second auction of Disneyland memorabilia and artifacts will take place on November 21. Meanwhile, all auction items are on display at the galleries, so we took a quick trip over the hill into the Valley to see them.

A group of young men followed us into Van Eaton. "Oh my god!" one of them gasped.

"Already with the gasping?" his friend snorted, rolling his eyes. "We just got here!"

But I understood completely, because sitting in the middle of the gallery was a paper model of the most fabulous building ever featured at Disneyland: the Monsanto House of the Future. The estimated auction price: $3500 (yikes!). Nonetheless, it was a thrill to see in person. 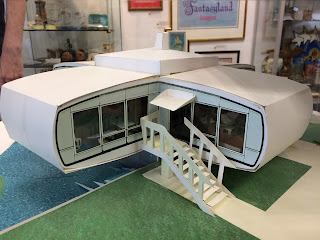 Paper model of the Monsanto House: be still my heart! 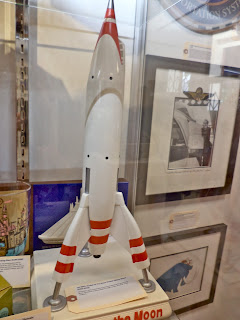 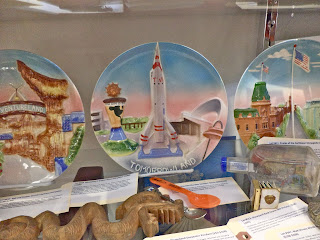 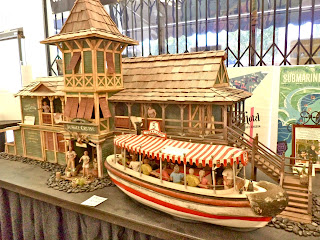 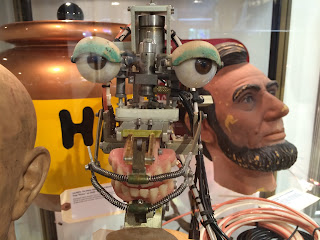 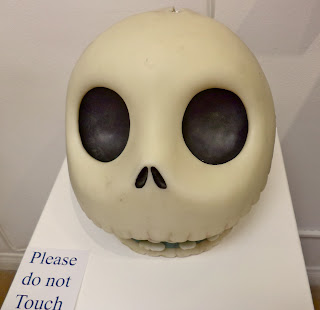 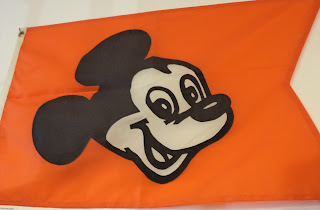 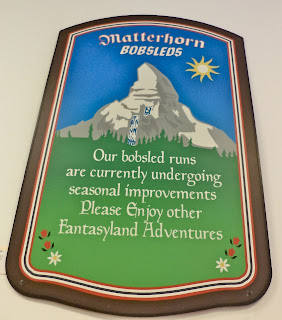 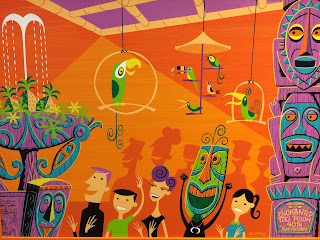 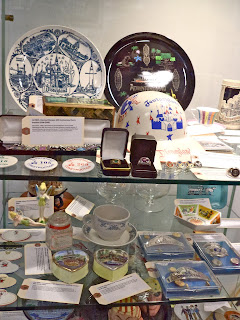 As you can see above, there were also lots of other wonderful things—everything from Disneyland charm bracelets to plates, maps, and ride blueprints to posters and cast member costumes. The real pièce-de-résistance, however, was two refurbished PeopleMover cars, plus working console. Never one of my favorites—too boring for my taste—the long-gone ride still has rabid fans. Not surprisingly, the cars are expected to fetch more than $300,000.


Larger auction items in a space nextdoor to the gallery

Prices were way beyond our means at the first auction, which Tim and I attended in February; but I can't wait to see the bidding for the PeopleMover. You know where I'll be on November 21!
Posted by Cyn at 12:48 PM No comments: