Tim and I were driving home from a meeting in Glendale during rush hour (not recommended!), Thursday evening, when he suddenly exclaimed, “Did you see that?”

“Did I see what?” I asked, trying to keep my eyes on the road.

“A man wearing a top hat and riding a motorcycle with his dog!”

“What are you talking about?” But then I saw them ahead of us and sped-up so we could get a better view.

The light was turning red. I pulled up next to them.

Tim rolled down his window. We stayed a couple feet behind so as not to be too obvious. Other drivers, however, were honking in glee.

We've seen a lot of crazy things during rush hour, but never a guy wearing a leather top hat and vest, riding a motorcycle with a big white dog on his lap! And what's more, they both seemed perfectly happy with the situation. 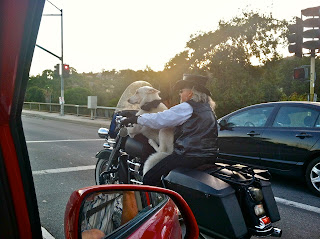 Stopped at a red light on Los Feliz 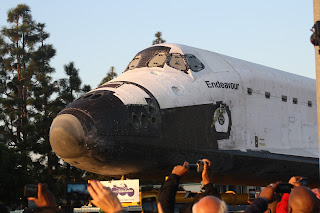 The first thing I did this morning was turn on the TV to see where the space shuttle Endeavour was in its trek to its new home. It had just passed the Inglewood city hall on its way to the Forum, where it was due to stop for an official “public viewing.” Thousands of people were expected. If we left right then, we could probably see it ourselves as it crawled slowly up Manchester Blvd. Tim had, after all, promised that we could see the shuttle in transit when we missed it flying into town while we were in Kansas City. So we threw on some clothes and headed out the door.

Karen used to live in Inglewood, very close to where Endeavour was passing, so we drove up her old street, until it became too congested and then just pulled over and parked. We then walked half-a-mile toward the Forum, glancing at Manchester the whole time to see if we could see signs of the shuttle.

When we arrived, we could see people standing behind barriers in the Forum parking lot, but no Endeavour. It was still en route! People were lining the street about 4-deep. No sign of the shuttle at all, until Tim suddenly yelled, “There’s the tail!” Then its huge black nose appeared. 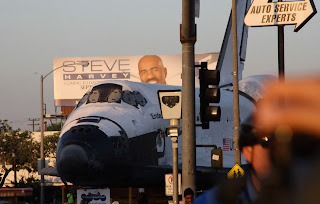 Heading toward us on Manchester Blvd.

I thought Endeavour looked big yesterday when I saw it parked in Westchester, but it was absolutely ENORMOUS ten feet away! Tim took photos like mad, while I just watched it pass. Everyone was ecstatic. This was way more exciting than when we saw the big rock drive by in Carson back in March! 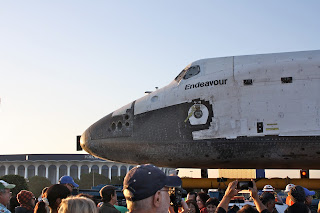 On its way past the Forum 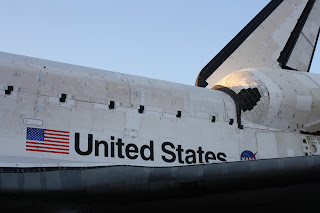 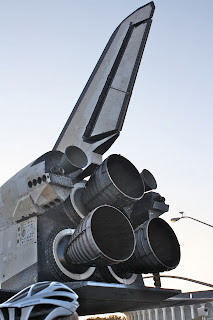 “A once in a lifetime experience,” some people were saying. More like “one time only!” I highly doubt anyone will ever see a spacecraft moving down the streets of Los Angeles again. What an amazing sight! 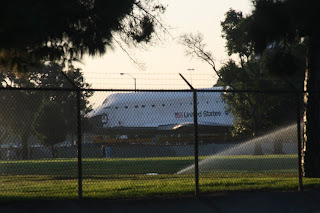 One last peak as we walked back to the car 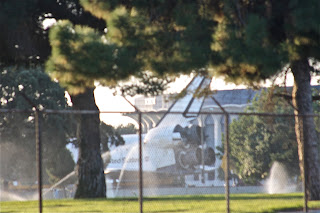 Endeavour's tail with the Forum in the background—
really puts things into perspective, doesn't it?
Posted by Cyn at 2:48 PM No comments: 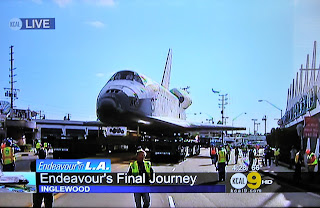 The phone rang at 6AM. It was Karen. We had briefly discussed, last night, the possibility of going to see the space shuttle Endeavour as it left LAX on its final trek to the California Science Center. But then I went to bed. Karen, however, lives within blocks of the airport’s runways and so got up at 2AM to chase the shuttle. She called at 6:00 to tell me that it was parked in a Westchester shopping center and, since the crowds were still relatively small, now would be a good time to see it. 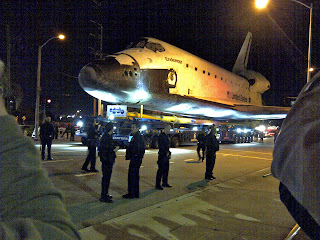 Shuttle on the move (thanks Karen!) 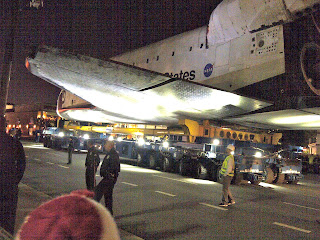 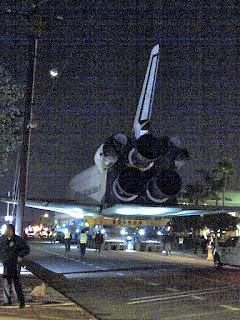 In case you don’t know, the Science Center was one of many agencies that vied to house Endeavour after it retired. The shuttle famously flew into town, September 21, on the back of a 747 airplane and buzzed over several Los Angeles landmarks before landing at LAX. For the next two days, Endeavour will slowly make its way to its final destination in Exposition Park.

We had missed the fly-over because we were in Kansas City—I was not about to miss the shuttle driving through the streets of L.A. So, even though I was still half-asleep, I hung-up the phone, threw on yesterday’s clothes, brushed my teeth, and hopped into the car, heading south on Sepulveda. Following Karen’s directions, I turned left on 83rd and entered a residential neighborhood. Others obviously had the same idea, so I took the first parking spot I could find. I then quietly walked four blocks, alongside several other early-risers. We all had our cameras at the ready.

The shuttle is reportedly five stories tall—I kept my eyes peeled. Then suddenly I saw something rather incongruous.

“There’s the tail!” I whispered to myself, as it peaked above the surrounding buildings. 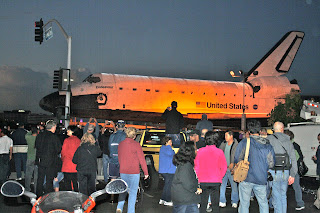 Indeed, the Endeavour was parked across the street from our new favorite breakfast joint, the Coffee Company, in the exact same lot we had parked last Sunday morning! I snapped a bunch of photos and then left because I had an 8:45AM dental appointment downtown.

I was sorry Tim wasn’t with me, but maybe we’ll get to see it together tomorrow. 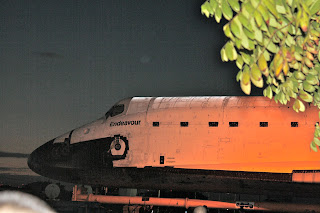 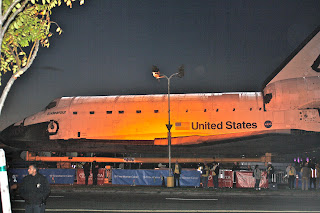 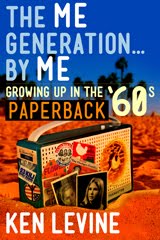 Even though I’m a librarian, I’ve never dedicated entire blog entry to endorsing a book. But this book is different because it’s set in The Valley, where Tim and I grew-up. OK, so Burbank isn’t exactly in the heart of The Valley, but it is on the edge and, as teens, my sister and I did all our major clothes and shoes shopping in North Hollywood and beyond.

Radio personality and TV screenwriter/producer Ken Levine is only three months younger than Tim and truly did grow-up in The Valley, not too far from Tim’s childhood home. He went to Taft High, cruised Topanga Plaza, ate at Bob’s Big Boy, worked at Wallichs Music City, and spent his summers at Zuma Beach. Plus he lived through all the same world-changing events of the 1960s we did.

The Me Generation . . . By Me: Growing Up in the ‘60s is funny and nostalgic and if you’re our age and grew-up in The Valley, you absolutely must read it! We also highly recommend Levine’s blog.

Happy memories!
Posted by Cyn at 9:00 AM No comments: 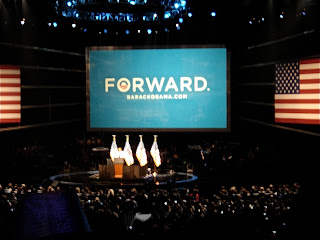 President Obama was in town last night for a big fundraising concert at the Nokia theater in downtown L.A. This was his last local appearance before the election, so I decided to go. Ticket prices ranged from $44 to $2500. As usual, my contribution was somewhere in the middle.

About 10 days ago I received an email directing me to pickup my ticket at the Obama Victory Fund office on Wilshire Blvd., which I did. Then 3 days ago I got another email outlining what I needed to know to get into the concert. No oversized bags or unusually large cameras. Doors were opening at 2:30PM, with the first of many performers playing at 3:45PM. I was taking the train into town and so thought I’d leave around 2:30PM. But when the president’s helicopter entourage flew over the house at 1:30PM, I put on my “Obama 2012” pin and quickly headed to the train station. I did not want to be late.

A woman and her 14-year-old son followed me off the train once we got to L.A. Live. She asked if I was going to the Obama event. They had never taken the train into downtown before and needed directions. “Follow me!” I said, as we headed over to the theater.

The line to get into the Nokia literally stretched around the block: past the Conga Room and five restaurants, north on Figueroa in front of the Grammy Museum, and then around the corner and west on Olympic to Trader Vic’s. We stood with a charming young man who had come alone. Turns out he and my other companions were all campaign volunteers and so had much better seats than mine. Since this was their first big political fundraiser, I told them what to expect: lots of waiting, rewarded by a rousing speech by the president at the end.

“And keep your eyes peeled for celebrities,” I warned. In fact, we were standing directly behind Aldis Hodge, who plays my favorite character, Hardison, on the TV show Leverage. My new friends had no idea who he was, but were thrilled nonetheless, especially when passersby stopped to take their picture with him.

After waiting on line for about 30 minutes, things suddenly got crazy once we approached the theater. We were asked to remove all political buttons before walking through one of several metal detectors. All doors were open, so people scrambled to get on the shortest line. I followed Aldis and lost my friends. The lobby was a madhouse as people scurried to buy refreshments before finding their seats. My seat was in loge, so I went upstairs to call Tim.

“I stood on line behind Hardison!” I told him excitedly.

I then bought some popcorn and went in search of my seat. And not a minute too soon as the lights dimmed and a group of school kids walked on stage to sing the national anthem. They were followed by Earth, Wind and Fire, who immediately brought the audience—all 7000 of us!—to our feet. 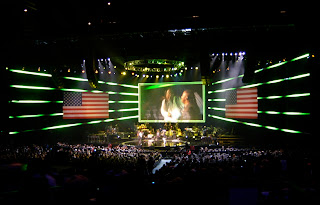 It was a star-studded evening. Jennifer Hudson came out next and sang an extremely moving rendition of the civil rights standard “A Change is Gonna Come.” The concert had just started and I was already blinking back tears! Hudson was followed by rocker Jon Bon Jovi, who was dressed in a suit and played a short acoustic set, along with a violinist and second guitar. He's apparently been traveling with Obama, because he mentioned a long list of campaign stops he and the president had made together over the past two weeks. 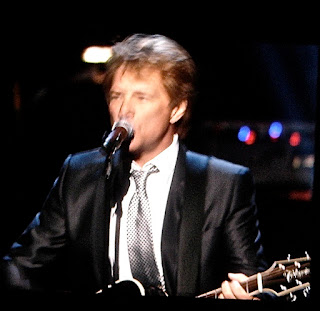 Katy Perry was next. She made three costume changes even though she sang only four songs! But she, too, almost made me cry when she brought out another group of school kids to help her sing a mellower version of her hit song “Firework.” The young woman who was sitting next to me was ecstatic. 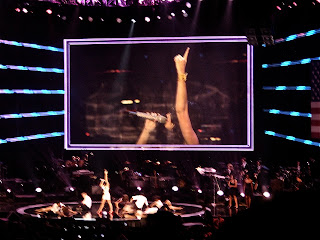 Politicos also spoke, of course, including L.A. mayor Antonio Villaraigoso and Julián Castro, mayor of San Antonio, TX. They briefly alluded to Obama’s unfortunate debate last week against the Republican candidate and then quickly made us feel better about the president’s chances at being re-elected. Castro, in particular, did a good job of emphasizing Obama’s track record of providing equal opportunities to all Americans.

George Clooney then took the stage, grabbing even the attention of the young couple next to me, who had been talking through most of the event. He spoke about Obama’s accomplishments these past four years, before introducing singer Steve Wonder, who had us dancing in the aisles. 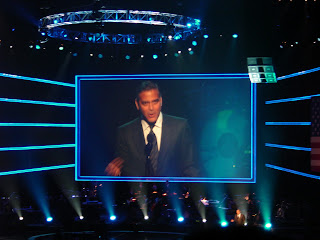 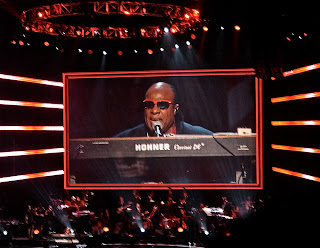 Obama then emerged to cheers and a standing ovation. He may not be a good debater, but he is a masterful speaker and had us all screaming our approval by the end. Reenergized, we all poured out onto the L.A. Live plaza afterward and headed home. It was 6:30PM. 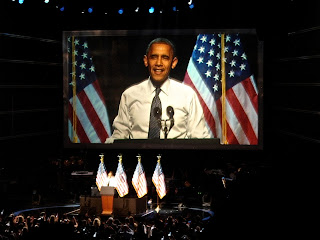 The train to Culver City was filled with Obama supporters. As we approached our destination, an older gentleman, who had gotten on two stops before, scratched his head and asked, “Did any of you go see the president downtown?”

“YES!!” we yelled in unison and then happily got off the train.