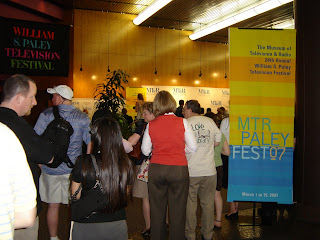 For the past eighteen years, Tim, Karen and I have blocked-off the first two weeks in March for the Paley Festival, a multi-day film-and-panel-discussion event sponsored by the Museum of Television and Radio (MTR). Although older series, like “Hill Street Blues” and “The Odd Couple,” are occasionally honored, the Festival is mostly about the hottest new shows of the season. Over the years, we’ve attended events celebrating “Lost,” “Desperate Housewives,” “Boston Legal,” “24,” “Battlestar Galactica,” “Everybody Hates Chris,” “X-Files,” “The Wonder Years,” “Freaks and Geeks,” “Friends,” “Bernie Mac,” “Deadwood,” and “China Beach,” to name just a few. In 1990, we sneak-previewed “Twin Peaks” a week before it aired on TV. I remember going to work the next day and proclaiming that I had seen the future of television!

A typical Paley event begins with the screening of an episode of the show being honored, followed by an extensive Q&A with the series’ cast and creative team. If a single personality, such as Jack Parr, William Shatner, or Carl Reiner, is being honored instead of an entire series, then a clip-reel is shown recapping that person’s career. A moderator then launches into an “Actor’s Studio” type of interview that is often very funny. Shatner was a revelation—one of the best raconteurs I’ve ever seen—and Parr, of course, was brilliant. But, by far, one of the most memorable evenings was listening to Reiner and his pals talk about the golden age of television. The festivities take place at the smallish Director’s Guild of America (DGA) theater, so it’s always an intimate affair.

In the old days, Karen and I would get up at the crack of dawn to stand on line for six hours to get tickets. This year, however, the Museum decided to outsource its ticket sales to Ticketmaster—a big mistake! By the time I logged on (9:05AM), “The Office,” “Heroes,” and “Ugly Betty” were already sold-out! Never in eighteen years had we been sold-out of shows we wanted to see! I was furious and made a trip to the Museum (in Beverly Hills) to air my displeasure. When I told the volunteer at the reception desk I wanted to complain about how the Paley tickets were handled, he laughed and said, “You and everyone else!” I was offered a million apologies along with promises to do better next year, but there was nothing more they could do this year. 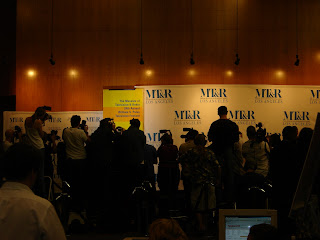 Although we didn’t get tickets to the three shows we really wanted to see, Karen and I were able to attend the “Brothers & Sisters” event on Monday, March 5. The lobby was a frenzy when we arrived. Photographers madly waved their arms and yelled as the show’s stars walked the short red carpet outside the theater. I headed toward the ladies room and was almost wrestled to the ground by a bodyguard who evidently thought I was going to rush the red carpet. “I need to get some water and then I’m going to the bathroom. Is that all right?” I asked indignantly.

The event itself was pleasant, but less than memorable. Sally Field, who plays the widowed mother Nora, got the biggest applause even though the show is supposed to belong to Calista Flockhart. Field looks exactly like she does on television and had no trouble playing the elder spokeswoman on stage. The other big crowd pleaser was Jason Lewis, who plays the gay brother’s love interest and was Samantha’s much younger hunky boyfriend in “Sex and the City.” Although he wasn’t part of the on-stage entourage, he caused quite a stir when he stood and waved to the audience.

Flockhart, who plays Kitty, is only slightly less skinny in person than she is on TV. Still, she’s obviously adored by her male costars (don’t ask me why!) She sat between Rob Lowe, her on-air boss/boyfriend, and Dave Annable, Kitty’s youngest brother, and affectionately flirted with them the entire time. When asked why he auditioned to be part of “Brothers & Sisters,” Annable quipped that he wanted to meet Harrison Ford (Calista’s very famous significant other).

And speaking of significant others (beware: spoiler alert!), it was revealed that Nora is about to get a new love interest: Peter Coyote, who just happened to be in the audience.

With that, our one Paley evening was over...

That is, until two days later when Tim miraculously got a phone call from MTR, saying two tickets had been returned for “Ugly Betty!” Did we want to go? I can only guess that my little chat with Museum staff had left an impression! So the following Monday, Tim and I headed back up to Hollywood to see “Ugly Betty,” even though I had been home sick all day. There was no way I was missing this!

The entire cast, except Tony Plana (the father) and Ana Ortiz (the sister), were there. Vanessa Williams is simply gorgeous and Rebecca Romijn is statuesque. Ashley Jensen, the frumpy dress designer, is a lot more beautiful in person—as is, of course, America Ferrera (Betty), for whom the show was written. The happy chemistry among the actors was palpable and everyone seemed genuinely humbled to be part of such a hugely successful show. Ferrera cried when she described what an honor it is to play Betty. But the evening truly belonged to Michael Urie, Wilhelmina’s gay assistant, and Mark Indelicato, Betty’s young fashion-savvy nephew. Urie is as flamboyant as his on-air character and Indelicato is wonderfully self-assured. All the cast members talked about how liberating it is to be part of a series that celebrates individuality and uniqueness. 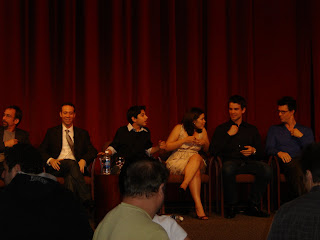 I can’t wait to see which shows are honored next year... 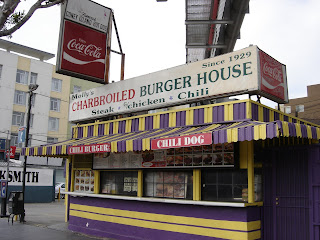 One of the first things I mark on my calendar every year is the L.A. Marathon, which always occurs on the first Sunday in March (today). Not only are we the only people I know who actually watch the marathon (on TV) from start to finish, but the streets around the race route (and beyond!) are always so horribly impacted that it’s almost impossible to travel anywhere north of Culver City the entire day. Karen and I were going to go to the Pasadena City College flea market this morning, but canceled when we realized we’d have to cross the race route at least once no matter which way we went. Better to stay home and just watch the race.

The beginning and end of the marathon are always the most exciting: hearing the inspirational story of at least one breast cancer survivor who runs the 26-mile course to celebrate her new lease on life, and then at the end cheering for the lone woman runner who looks like she might beat the men but never does. Very motivational.

But for us, the best part of the marathon is seeing some of our favorite parts of L.A. on television as the runners race by. This year, the course started at Universal Studios, north of Hollywood, and ended in front of the Los Angeles Public Library in downtown L.A. Once the TV is on, it’s a constant commentary between Tim and me as the camera rolls by numerous local landmarks.

Mile 1: “There’s the fire station on Cahuenga! Yikes, can you imagine running up that hill?!”

Mile 3: “They’re making the Franklin Avenue curve in front of the Presbyterian church! ‘Hollywood Bowl parking—No stacked parking!’” (We’ve walked down that hill. I can’t imagine running down it in a horde of 25,000 people! How do the runners keep from getting trampled to death?)

Mile 4: (Tim) “They’re turning right at Hollywood and Vine!” (Me) “Haven’t they finished converting that building into condos yet?” [talking about the building where Tim used to work]

Mile 6 (Hancock Park, where Vine turns into Rossmore): (Me) “Looks like all the rich folks are still sleeping—not many people cheering from the sidewalks.” (Tim) “Or maybe they all went to Santa Barbara for the weekend...”

Now bored (not our favorite part of town), I hop into the shower, but am out in time for Exposition Park and environs.

Mile 13: “There’s the Coliseum!” (followed by a brief infomercial touting the beauty and cultural advantages of the Exposition Park area. Huh?)

At Mile 23, the runners head west as the camera suddenly pans toward downtown L.A. The view is breathtaking and for a (very!) brief moment I wish I was dashing toward the finish line. The men overtake the sole woman runner (a 45-year-old Russian) in the last mile and then it is all over. Along the way, we heard the story of a woman who had lost 100 pounds, which she keeps off by exercising. We also saw a blind man running his third (!!) marathon and watched a father pushing his disabled daughter in a stroller.

Maybe we should actually participate in the marathon next year, even if we only walk two miles and then jump onto the subway. To get in shape, I’ll start by walking around the block as soon as this year’s winners are crowned.