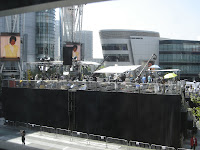 Though we were, of course, saddened by the death of Michael Jackson—someone we both admired when we were much younger—his passing took on a far more immediate note when it was announced that his memorial service would be held Tuesday at the Staples Center, across from L.A. Live, where Tim works. In fact, Tim’s reaction was very immediate.

Obviously we appreciate the role Michael Jackson has played in the history of pop culture. But after a week, we had had enough of the constant media coverage, especially when so many more important issues were being neglected. (Hel-lo! Has The Today Show truly forgotten that people are still losing their jobs every day?!)

To make matters worse, on Monday the area surrounding Staples and L.A. Live was cordoned-off to memorial service ticketholders, the media and employees only, making downtown traffic even more heinous than usual. The last thing I remember saying to Tim before falling asleep Monday night was that he should leave for work as early as possible the next morning. The next thing I know, it's 5:45AM and he's kissing me good-bye! Groggy, I put on the news to see just how terrible the traffic was. An hour later, I called him to make sure he made it to work safely.

As I feared, despite leaving early he got caught in traffic and ended up paying $25 to park five blocks away. He showed his company ID to a police officer guarding the cordoned-off area, but was refused entry into L.A. Live; so he continued to walk around the perimeter until he found a more enlightened guard. Tim had just got to the office when I called.

“It’s a complete media circus here!” he complained. “Every morning news show is broadcasting from outside Staples.” (Click on the photos to see Katie Couric, Anderson Cooper and—gag!—Billie Bush.) 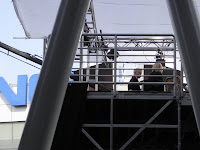 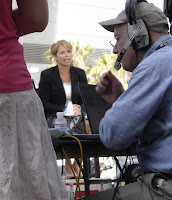 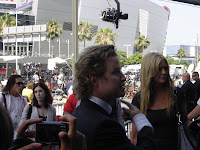 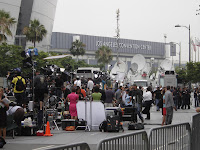 I was teaching that afternoon and so watched the memorial service off-and-on while prepping for class. Although I swore I wouldn’t cry, I did get emotional during Brooke Shields’ speech, right when Tim decided to check-in. He had been running around taking pictures of the various news anchors while they were broadcasting. We compared notes on the service.

“It is sad,” he said. He later told me that some of his male coworkers teared-up during “We Are the World,” the final song of the service.

I know it’s naive, but I do hope Michael Jackson can now finally rest in peace.
Posted by Cyn at 4:46 PM No comments: 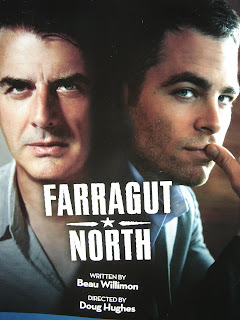 Although L.A. is primarily known as the film capital of the world, it’s also home to several renowned theatrical venues. The Mark Taper Forum, Geffen Playhouse, and Pantages and Ahmanson theaters have all hosted—and sometimes even premiered—world-class productions of comedies, dramatic plays and musicals. Plus there’s usually at least one movie or TV star in the cast, always adding to the excitement of the performance.

Farragut North opened last week at the Geffen to rave reviews. Not only was the topic of the play—the behind-the-scenes political machinations of a fictional Democratic presidential campaign—right up my alley, but the cast was stellar: Isiah Whitlock, Jr., who played the corrupt senator on HBO’s The Wire, Olivia Thirlby, the best friend in Juno, Chris Noth, Sex and the City’s Mr. Big, and Chris Pine, Captain Kirk in the new Star Trek movie. As soon as I read the L.A. Times review, I went online and ordered a ticket for the Saturday matinee. My seat wasn’t ideal (way over to the left), but I was happy nonetheless as that day's performance ended up selling out.

Now I’ve followed politics for many years and have seen just about every movie made about presidential campaigns, so I wasn’t surprised at all by what happens in the play: the wunderkind political strategist decides to put his own ambitions above those of the campaign. But I was pleasantly surprised by the cast’s caliber of acting. Thirlby was good as the liberated young intern who’s attracted to powerful men and Noth was excellent as the aging politico. It was Pine, though, who stole the show, playing Noth’s fearless up-and-coming protégé. Since I've only seen him in Star Trek, all I can say is that he takes the confidence of Captain Kirk and redirects it into a much darker place, resulting, of course, in the downfall of at least one character. His performance was so engrossing that the audience loudly gasped a couple of times at his underhandedness, something I’ve never experienced in live theater before.

The play is on till July 26. I highly recommend seeing it if you’re in the neighborhood and want to see some really good L.A. theater.
Posted by Cyn at 5:37 PM No comments: