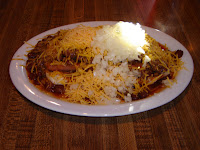 Like everyone else, we watch the Food Network’s “Diners, Drive-ins, and Dives,” starring Guy Fieri, the gastronome with the white (yellow?) spiky hair. He can be obnoxious, but the restaurants he visits always look appetizing in a greasy-spoon kind of way. Last week’s hour-long “best of” episode was especially appealing because it featured, among other places, Mike’s Chili Parlour, an ancient hot dog palace located in Ballard, just north of downtown Seattle. Since we were flying up there to be with my sister Vicki for Thanksgiving, Tim’s eyes immediately lit-up.

“Look at that enormous chili dog!” he said in a food-induced trance. “Do you think Mike’s is on the way to your sister’s?”

I can certainly take a hint and so quickly went to Google Maps. Mike’s was indeed on the way to Vicki’s house, if a bit off the beaten track. I printed the directions and called my sister to tell her we would be taking a side trip to Ballard en route to her house. While on the phone, she asked her husband if he had ever eaten at Mike’s.

“No,” I could hear him say in the background. “But it sure smells good every time I drive by!”

We arrived in Seattle on Wednesday just in time for lunch. After a couple of false starts—I had copied directions from the airport, not the car rental agency, which was located off-site—we got on the right freeway and headed north. We drove west of downtown Seattle and through various neighborhoods until we finally saw signs for Ballard.

We were suddenly in the middle of a seedy industrial area that looked like something out of “On the Waterfront.”

“There are no restaurants here,” I exclaimed. “Damn you, Guy Fieri!”

But just as we were about to give up, we spotted two very satisfied-looking men emerging from a diner.

“There it is!” we both yelled in unison as I swung over to the curb and parked. 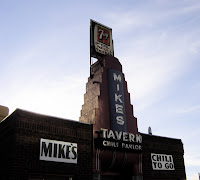 Built in 1922, the exterior of the restaurant still has vestiges of an art deco facade that must have been elegant at one time. The inside, however, is pure diner, with raised booths, a pool table and full-on bar. It was small and dark and looked like it hadn’t been painted in forty years—in other words, it had lots of character.

Tim eyeballed the menu and selected the chili cheese dog he had seen on TV. I, on the other hand, haven’t eaten a hot dog since reading Upton Sinclair's “The Jungle” in sixth grade and so was pretty much out of luck. There was a handwritten note tacked above the bar promising grilled chicken sandwiches. But the young waitress said they had run out of chicken earlier in the week, so I just ordered french fries. 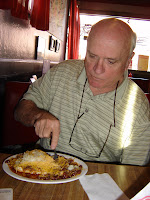 The chili cheese dog was so massive—and messy!—that Tim happily ate it with a fork and knife, while I looked the other way. A group of obvious tourists came in and scanned the room for seats.

“Looks like someone else watches the Food Network,” I whispered to Tim.

The story doesn’t end here, of course. From Ballard we went to my sister’s home and had pork roast for dinner. This was followed by turkey and lots of other food on Thanksgiving. The bird wasn’t the only thing stuffed by the end of the day! 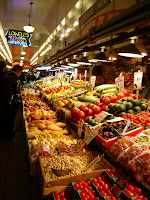 As if that wasn’t enough, we decided to join the post-holiday shopping crowd and so drove into downtown Seattle, Friday morning. Pike Place Market was even more festive than usual. Still, we resisted all urges to eat. That is, until Tim spied a small sign across the street: “Taxi Hot Dogs.” He looked at his watch (11:30AM), decided it was time for lunch and headed toward a small hot dog joint a few doors north of the original Starbuck’s.

“One regular hot dog,” he ordered and was once again in his glory. 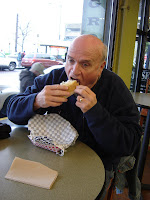 We both vowed we’d eat nothing but salad when we returned to L.A. We’ve been home now for 24 hours. It still hasn’t happened . . .
Posted by Cyn at 4:29 PM No comments: 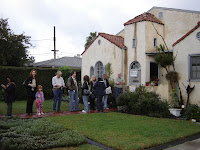 Woke up at 6AM. Tim and I had already agreed that we would vote first thing in the morning, since the lines would be too long after we both returned from work. I hopped into the shower and then walked over to our polling site, a house two blocks from our home. I was the first person there; but by the time Tim joined me, the line was already to the street.

At 7AM, the owner of the house came outside and announced the polls were now open. I applauded and entered. It was a bit chaotic, but I signed in and took my ballot to the voting booth in the corner. I waved to Tim to come vote in the booth next to me. We had marked our sample ballots ahead of time, so were able to vote very quickly. Nonetheless, I almost started to cry when I opened the booklet and saw Barack Obama’s name. Regardless of the outcome, this is the single most historic election I’ve ever voted in. It is almost impossible to express the enormity of this day.

Exiting the polls, we greeted our neighbors as they waited on line. We have an Obama lawn sign in our front yard, so it’s no secret how we voted.

“What a great day!” I exclaimed, barely containing my emotions.

We then saw Nick, our next-door neighbor’s youngest son, with sample ballot in hand.

“Is this your first election?” I asked.

Just as we got home the sky, which had been rainy a few moments before, opened up to reveal patches of blue.

“Maybe it’s sign of good things to come,” Tim observed as he jumped into his car to head to work. I went inside, wondering how I’d ever be able to concentrate on anything but the election today. 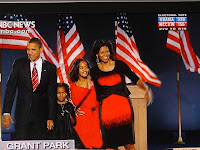 If I didn’t have to teach this afternoon I would have sat in front of the TV all day waiting for the election returns. As it was, I called Tim as soon as class ended at 5PM.

“Has Obama won yet!?” I asked half-jokingly.

He hadn’t, of course. But even though the polls just closed on the east coast, Obama had already racked up 100 electoral votes. Unlike 2004, when Tim and I went to bed not knowing whether John Kerry had won or lost, this looked to be a short night. I rushed home.

Over the next couple of hours, we watched as people around the country gathered in anticipation of an Obama victory: students at Spellman College and Indiana University; African-Americans in Harlem; and thousands of supporters in Chicago’s Grant Park. Never in my 36 years of voting have I ever seen anything like it.

Then suddenly, at one minute past 8PM, NBC newsanchor Bryan Williams came on and announced the election results. Thanks to California and our neighbors to the north, Barack Obama had surpassed the 270 electoral votes needed and won the presidency! Unbridled joy erupted in Grant Park, while an emotional Tom Brokaw cried.

I, too, cried—and haven’t really stopped yet!—in relief and happiness that a new era is about to begin in America. To me, it’s more than Obama being black or even a Democrat—it’s about having a brilliant, articulate president who has captured and reengaged the imagination and hope of our nation. Sure, he has far less political experience than his opponents; still, he has already proven himself a magnificent leader and motivator of young and old alike. He listened to the people and they responded in kind. It is now our turn to do whatever we can to help him succeed as president. 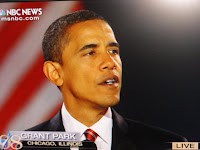