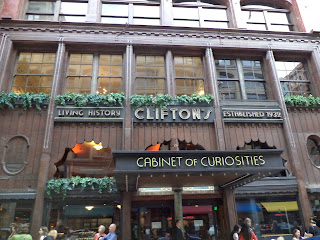 Clifton's Cafeteria has been a downtown L.A. institution since the early 1930s, when Clifford Clinton opened his first restaurant, Clifton's Pacific Seas. Decorated in a garish South Pacific motif—including a cascading waterfall!—the "cafeteria of the golden rule," where diners were encouraged to pay only what they thought was fair, was soon followed by Clifton's Brookdale. Modeled after the Brookdale Lodge, built around a grove of redwoods in Northern California, the second cafeteria featured fake trees, stuffed animals, and a small chapel. I used to eat lunch there when I briefly worked for Price Waterhouse in the late 1970s. It was sad and kitschy and unlike any other restaurant downtown, but I loved their white cake with whipped cream frosting and strawberries. Plus they served jello!

Though the Pacific Seas closed in 1960, Brookdale remained open until four years ago, when it was bought and closed for extensive renovation. Its grand reopening, later this week, is one of the most highly anticipated events among L.A. history buffs and foodies alike. We got a sneak peak last night during an L.A. Conservancy fundraiser. 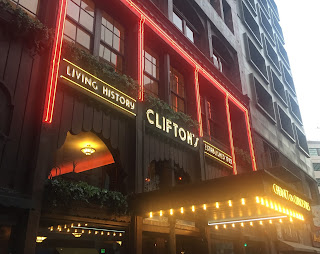 Even though we arrived an hour early, we were not the first ones in line. Many people were dressed in 1940s/50s garb and several shared stories of long ago meals, when an aging Clifton's was just a dumpy old cafeteria. Everyone oohhed and aahhed when the exterior neon lights turned on. Then, finally, the doors opened. VIPS, who got to look down on us from the restricted third floor, entered first. 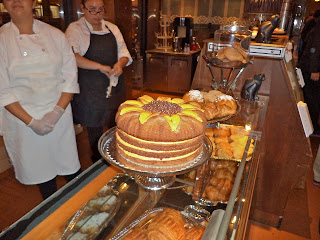 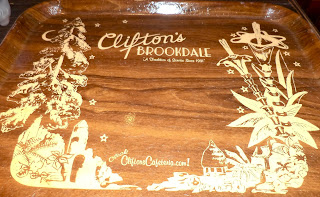 We were waved in and directed to the left, past a glorious display of baked goods. The kitchen, which (if memory serves) was small and dingey, is now all state-of-the-art chrome and gorgeous. I would have taken photos, except I immediately grabbed a tray and started loading-up small plates of food: Waldorf salad, pizza, curried cauliflower on a bed of mashed potatoes, and the best bowl of chicken noodle soup I've ever had. The chef's goal may be to honor the original menu as much as possible, but his food is top-notch gourmet all the way—a thousand times better than the last time we ate at Clifton's, some six or seven years ago. 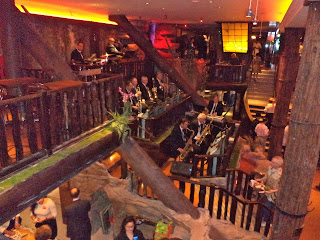 Swing band and a view of the former mezzanine

After the initial frenzy, we noshed at a table on the second floor (formerly the mezzanine), overlooking the main dining room. A 10-piece swing band played nearby. I glanced around between bites. The old redwood forest decor has been lovingly restored and large stuffed animals—a bison, bear, and deer—are now exhibited in museum-quality display cases. In fact, the main floor looks like a cross between the lobby of Disney's Grand Californian hotel and the L.A. Natural History Museum's North American mammal hall—only Clifton's, of course, is a lot noisier and hipper. It should be a fun place to dine, once the crowds subside. 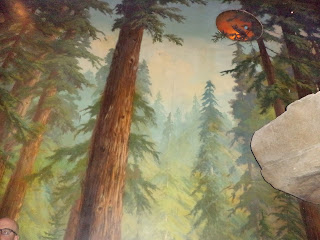 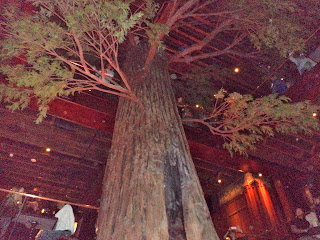 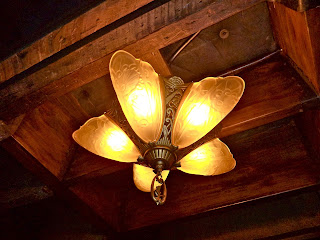 By the time we finished eating, the dance floor was completely obliterated by people waiting to get into the kitchen. Still, we managed to find a small corner to swing and twirl to a couple of songs. I then made a beeline to the desserts to grab a piece of white cake. It didn't have whipped cream frosting or strawberries, but was good nonetheless—the perfect ending to a fun evening. People were still entering as we left. 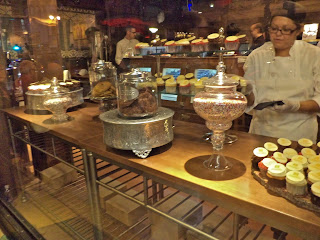 Last glimpse of the bakery through the front window 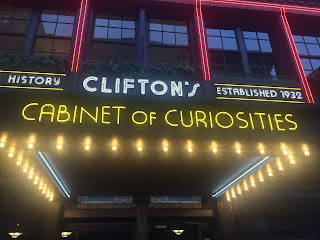 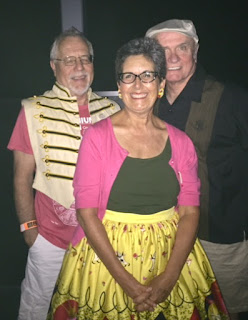 The guys and me enjoying MarchFourth!

The calendar may say that autumn is just around the corner, but L.A. continues to be in the almost unbearable throes of summer. Still, we managed to dress-up, go out and have fun this past weekend. With no air conditioning, any place was bound to be cooler than home.

On Friday, our friends Candi and Alan introduced us to MarchFourth!, a wildly energetic 20-piece group that fills the stage with marching band drums, brass wind instruments, female gymnasts, and an occasional guitar solo. They were great fun, highly entertaining and I loved the music. They played at the Teragram Ballroom, a new club (opened in May) located on 7th St.,  just east of downtown L.A. It's a terrific little venue. But wear comfortable shoes, because there are no seats. It didn't matter, though—we would have been on our feet all night, anyway! 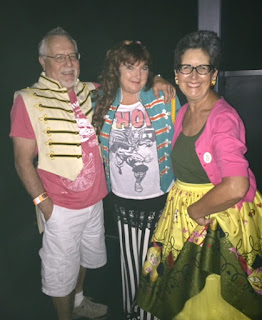 Despite the unusually late (for us) bedtime, we got up early the next morning to drive out to Disneyland for Dapper Day, our favorite excuse to wear fancy clothes. Dapper Day was so popular this time that the park reached capacity, late Friday. I'm so glad we decided to go on Saturday instead—especially since parked, at the Dapper Day car show, was a cherry version of my very first car: a red 1960 Ford Falcon station wagon. I nearly burst into tears. Tim asked the owner if I could sit inside and he said yes, but only if I didn't cry! I was 17 all over again. 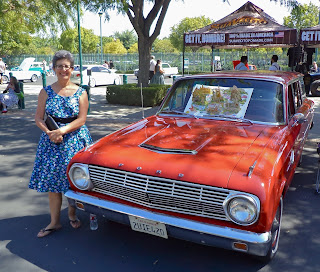 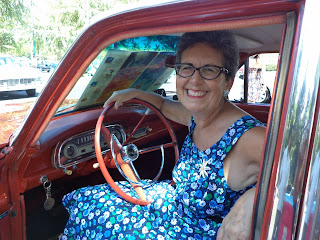 Inside (happy, no tears) 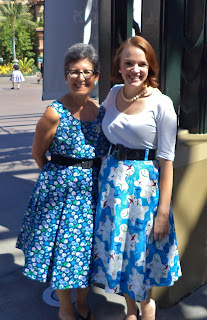 Friend Kelsey (wearing Mary Blair) and
me in Haute of Heart 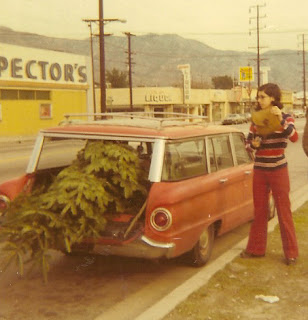 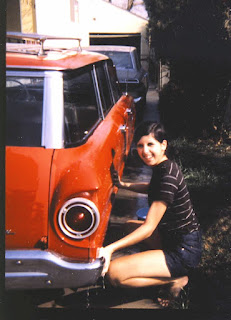