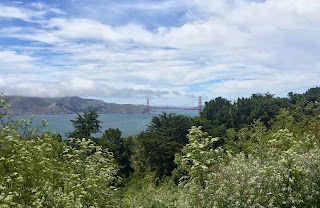 The backside of the Golden Gate Bridge, en route to
the Legion of Honor Museum (click on image to enlarge)
What a wonderful weekend. Not only was it the annual American Library Association (ALA) conference, but on Friday the U.S. Supreme Court ruled that gay couples have the same right to marry as everyone else. And the perfect place to hear such glorious news? Why, San Francisco, of course, which was also hosting its annual Gay Pride celebration this weekend. Rainbow flags were flying everywhere and librarians gave gay rights lawyer Roberta Kaplan, who was already scheduled to give the ALA opening session keynote address, not one but two standing ovations. I doubt there was a dry eye in the place. Everyone was jubilant. We all had reasons to be proud this weekend.

As for ALA conference: lots of good professional networking and some interesting, but fun presentations. I saw the Today Show’s Al Roker, who keynoted breakfast on Saturday—a highly entertaining speaker. Tim and I sneak-previewed the new Martin Scorsese documentary, called The 50 Year Argument, about the New York Review of Books (excellent!). Plus I heard a fascinating talk about early 1900s librarians in Redondo Beach.

On Saturday afternoon, we played hooky and schlepped out to the Legion of Honor Museum to see the fabulous “High Style” fashion exhibit, on loan from the Brooklyn Museum Costume Collection of the Metropolitan Museum of Art. 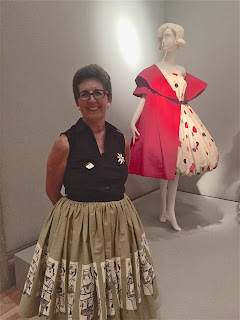 Me, in my favorite Mary Blair skirt, in
front of a 1961 Arnold Scaasi evening
ensemble—as if! (A girl can dream,
can't she?)

And Tim took in a Giants game on Sunday. 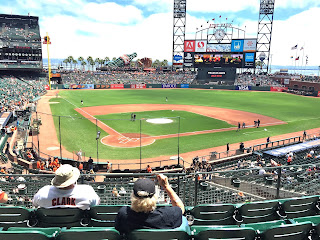 Everyone else was either attending the conference or cheering wildly at the Gay Pride Parade, which lasted the entire day. By the way, if you need to get across Market Street during the parade, go under at the BART stations. Otherwise, put on a crazy costume and join in the fun, because there’s no way to avoid the festivities!
Posted by Cyn at 6:45 PM No comments: