Thursday night, the Grammy Museum screened a documentary about the Wrecking Crew, an historic group of L.A. studio musicians who played on most American Top 40 hits of the 1960s. I wasn’t feeling 100%, but Tim really wanted to go, so I took a Dramamine and met him downtown. Boy, am I glad I did!

The Wrecking Crew got their name because their predecessors said they were going to “wreck the music business.” Tim knew all about them, of course, but I didn’t have a clue. I do remember the huge scandal when we learned that one of my favorite ‘60s groups, the Monkees, didn’t play their own instruments. Well, as it turns out, very few groups played instruments in those days. Instead, the Wrecking Crew played back-up on most songs and albums without ever really being recognized for their efforts. They were also responsible for Phil Spector’s famous “Wall of Sound,” which was created by squeezing 20-30 musicians into L.A.’s long-gone Gold Star Studios and having them all play live at the same time.

Although some of the Crew’s musicians, including Glen Campbell, Leon Russell, drummer Hal Blaine, guitarist Tommy Tedesco, saxophonist Plas Johnson, and bass player Carol Kaye, went on to find fame in their own right, most of them are still unknown outside the music industry. But their sound is recognizable worldwide. Among their most notable recordings are: Jan & Dean’s “Surf City” and “The Little Old Lady (from Pasadena),” Gary Lewis and the Playboys’ “This Diamond Ring” and “Everybody Loves a Clown,” the Association’s “Never My Love” and “Cherish,” the 5th Dimension’s “Stone-Soul Picnic” and “Up-Up and Away,” Barry McGuire’s “Eve of Destruction,” The Byrds’ “Turn Turn Turn” and “Mr. Tambourine Man,” Sonny and Cher’s “The Beat Goes On” and “I Got You Babe,” The Ronettes’ “Be My Baby” (one of the greatest songs ever recorded, by the way!), The Monkees’ “Last Train to Clarksville,” Ricky Nelson’s “Fools Rush In,” the Ventures’ “Hawaii Five-O,” the Righteous Brothers’ “Unchained Melody” and “You’ve Lost that Lovin’ Feeling,” Carpenters’ “Close to You” and “We’ve Only Just Begun,” several Tijuana Brass songs, the Crystals’ “Da Do Ron Ron,” “Then He Kissed Me,” and "He’s a Rebel” (the first 45-single my sister ever bought), Wayne Newton’s “Danke Schoen,” Simon & Garfunkel’s “Mrs. Robinson” and "Bridge Over Troubled Waters," Nancy Sinatra’s “These Boots are Made for Walkin’,” Mamas and Papas' "California Dreamin'," Elvis' "Viva Las Vegas," and the Beach Boys’ “Pet Sounds” album, arguably the greatest pop-rock recording of our generation. Unfortunately, once Top 40 music lost favor among more sophisticated rock listeners, demand for the Wrecking Crew waned and their golden age was over.

The theater was filled to capacity with mostly fans (our age) and longtime musicians, including Creed Bratton, one of the wacky staffers on TV’s “The Office” and former member of the rock group Grass Roots (who knew?). Filmmaker Denny Tedesco, Hal Blaine, pianist Don Randi, and engineer/producer Bones Howe answered a handful of questions afterward. But the real star was the music, which I still can’t get out of my head. 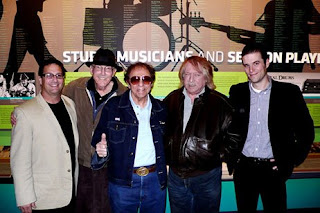 We’ve pretty much been lying low since the holidays—partly because Tim is working 12-hour shifts, 6 days a week getting the new broadcast studios ready at L.A. Live, but also because I’ve been sick off-and-on with a recurring bout of Meniere's, an inner-ear disease that is completely incapacitating. The disease manifests itself as extreme vertigo, forcing me to stay in bed, at least once a week, until the “attack” passes. It’s incurable, but it can be managed through a low-salt diet.

When I was a kid, I merely tolerated food and ate only because it was necessary to survive. I couldn’t understand why my family was so obsessed with eating all the time.

As I’ve gotten older, though, I’ve grown to appreciate food—its flavors, its cultural significance, and the joy of trying new restaurants. I don’t like everything—seafood and fish (ack!), for instance—but I do love to eat. Food looms large in Tim’s and my life.

But food is now the enemy. Turns out just about anything that’s packaged has sodium, causing my ear to fill with fluid, which leads to vertigo and other unpleasant side effects. Plus restaurants apparently put salt on everything! The only place that’s safe is Fatburger (YUM!), where you can request “no seasoning” and watch as they prepare your burger your way. They’re also one of the few places that doesn’t put salt on their french fries—heaven!

So I’ve been cooking at home a lot, adapting time-tested recipes by leaving out the salt. The best ones so far: chicken kiev, pasta primavera (without parmesan cheese—boo hoo!), baked potato and salad (with vinegar and oil, instead of sodium-infused bottled dressing), low-sodium ravioli with melted butter instead of spaghetti sauce, Chinese chicken salad, and chicken flautas, which I usually make only once a year (easy but very time-consuming) but have already made twice since January 1st. One good thing about this disease: it’s forcing me to eat healthier and also helping me lose weight. But, damn, I miss pork!

I’ve been told the attacks will probably abate in a couple of months. I can’t wait till April! 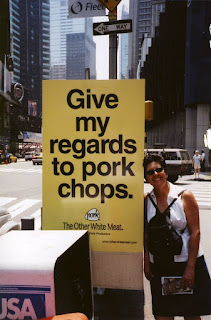