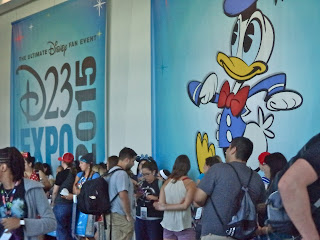 Funny how we always seem to end up in Anaheim for our anniversary. This year it fell on the last day of the D23 Expo—the huge Disney extravaganza that happens every two years. I went early, Friday morning, and attended a program on the history of Disney merchandise—mostly just a big pimp for soon-to-be-released items—plus a wonderful panel on the early days of Disneyland. Elder Disney statesmen and "legends" Marty Sklar, Richard Sherman, and Orlando Ferrante talked about working with Walt back in the day. I didn't learn anything new, but it's always wonderful to hear the old stories.

Tim took the train to Anaheim, late Friday, and joined me in time for dinner. We spent the night and then returned to Expo the next morning. We saw the presentation on new park attractions—e.g., Star Wars (Disneyland and Orlando), Toy Story (Orlando) and Avatar (Orlando)—and then dashed upstairs for a panel commemorating the 20th anniversary of Toy Story. Director and Pixar head John Lasseter, animator Pete Docter, et al., reminisced about creating the movie that would set the standard for all animation that followed. Needless to say, we're big fans. 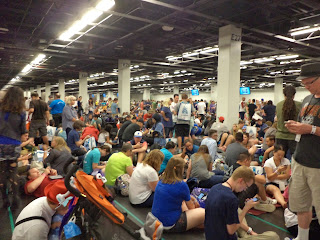 The convention was lots of fun, but the lines were obnoxious. After waiting on line outside in the broiling heat for two hours, the first day, I finally left and retreated to the hotel. I returned at noon after everyone else got inside, only to stand on more lines to get into the programs and D23's "Dream Store." In the store, I went crazy buying limited-edition items celebrating Disneyland's 60th anniversary, including a fabulous Harveys seatbelt bag decorated in an old paper-ticket design. A woman, who also grabbed one, asked if I knew how much the bags were.

"Does it matter?" I asked her incredulously.

"No!" she replied, as we both burst into laughter. By then, we were both giddy!

Surprisingly, not much cosplay this year; but lots of Mary Blair skirts and dresses in evidence. Lots of Star Wars, too, which I could have done without, even though I, of course, love Star Wars. We speculated that if Disney hadn't bought Lucasfilms, half the people wouldn't have gone to Expo and then the lines wouldn't have been so long. 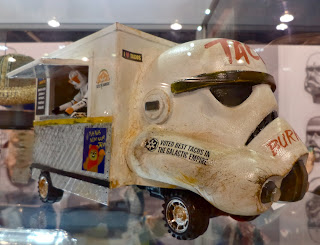 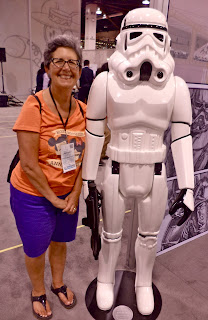 Me and Storm trooper 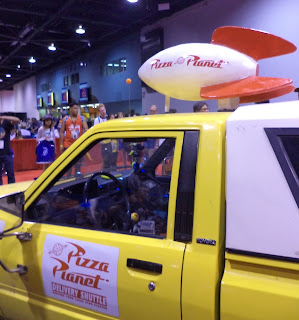 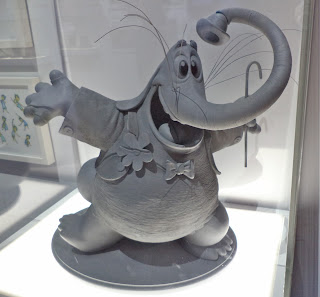 Bing Bong maquette and rest of characters (below) from Inside Out 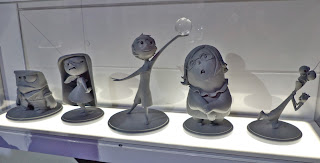 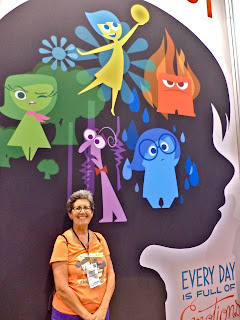 More Inside Out: "Every day is full of emotions"

Sadness from Inside Out 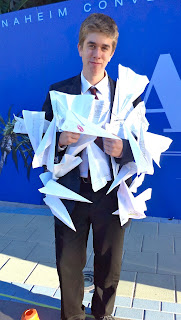 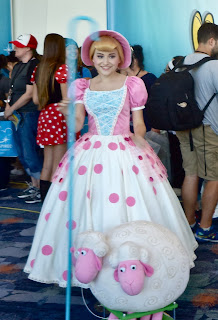 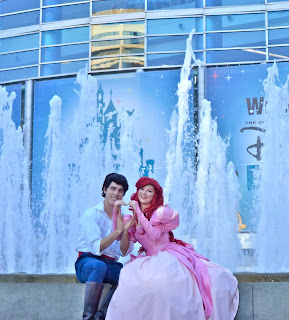 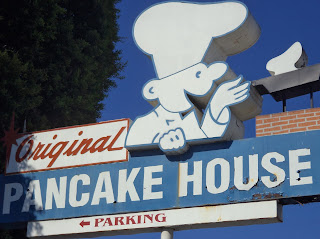 Not wanting to wait in line at Expo, Saturday morning, we went in search of breakfast in Anaheim. Tim's iPhone led us to the Original Pancake House on Lincoln. Located literally inside an old house, the place was packed—and for good reason, too, because the food was amazing! Apple waffles, strawberry crepes, a bowl full of hash browns, and thick crispy bacon. We were ready for anything the D23 crowd could throw at us. No more Goofy's Kitchen for us! 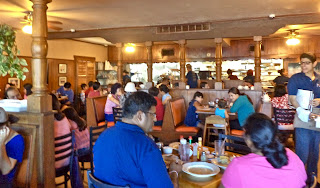 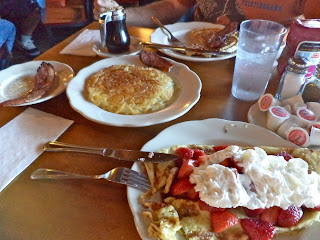 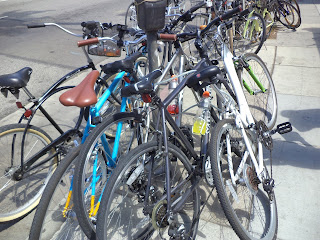 Three times a year, a neighborhood in the L.A. area closes a main street to cars and hosts CicLAvia, an all-day event that celebrates alternative forms of transportation. Mostly a bike-a-thon, the event is based on the ciclovias that have been held in Bógota, Columbia, for the past 40 years. The first CicLAvia occurred on Wilshire Blvd. three years ago.

Yesterday's event started at the Expo lightrail terminus in Culver City and continued west, for six miles, through Venice to the ocean. We no longer own bikes, but we do still have healthy feet, so we decided to checkout the scene by walking up to Sepulveda and Washington Pl., before turning right to downtown Culver City. Three hours—and five miles!—later, we returned home, sunburned and tired but exhilarated. Seemed like the entire town was out riding bicycles. See for yourself: 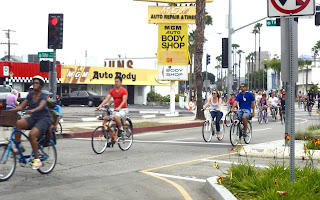 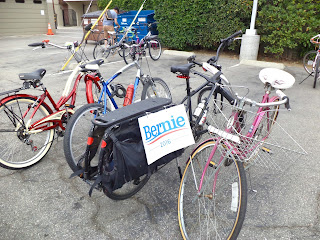 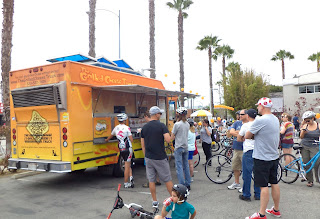 It wouldn't be an L.A. event without food trucks! 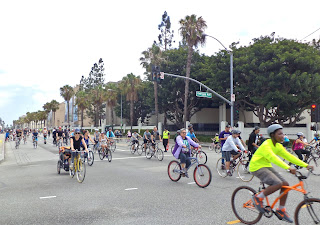 In front of Sony Studios at Overland 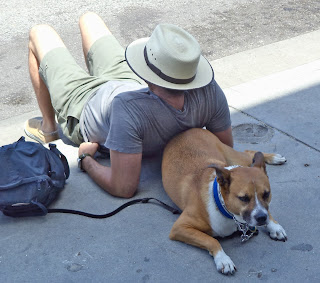 A boy and his dog, watching the world ride past 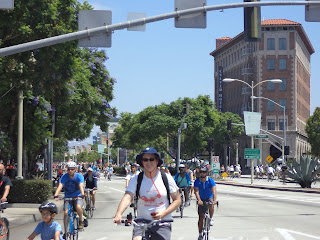 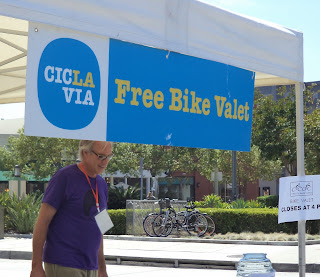 And, of course, bike valet service—only in L.A.!

Bikes zooming by in front of the NFL Network 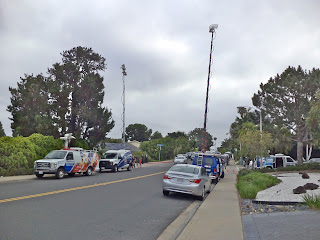 The media, waiting for Hillary in La Jolla
About three weeks ago, I got an email from Hillary Clinton’s presidential campaign,  saying she was going to be in Southern California for two fundraising events: an expensive one in Brentwood, on Thursday, and a more affordable morning “conversation” in La Jolla the day after. I decided to join her in La Jolla on Friday.

The event was at the home of Joan and Irwin Jacobs, well-known San Diego philanthropists. Doors opened at 9AM, so I left the house at 6AM. Despite Tim's fears that I was leaving too late, I made it to La Jolla in two hours. I knew I had arrived at the right place as soon as I saw the media trucks and protesters already there. I was way early, so skipped the free valet and parked in the neighborhood.

A friend, who had attended political events at the Jacobs’ home before, warned that Hillary’s people might confiscate my camera, so I walked over to the house to checkout the situation. I was told I could take still photos, but no movies. They then advised me to return at 9AM.

I was walking back to my car, when one the newscasters swooped over and asked if she could interview me. I was the only person on the street.

“Sure” I said, and suddenly three cameras and microphones were in my face.

They asked what I hoped to ask Mrs. Clinton. “I’m less interested in asking her anything than I am in hearing what she has to say,” I replied.

Was there anything in particular I wanted her to address? “Education,” I said, internally rolling my eyes, since even I knew that’s not a very sexy or presidential topic.

Had I met Hillary before? "No, but I met her husband when he was touring with his book, several years ago."

What should she do as president? “Carry on the good work of our current president and keep us out of war in the Middle East.”

Why am I supporting Hillary Clinton? “She’s a Clinton, a woman, and she’s already seen the world from inside the White House,” I enthused. “I think she’s wonderful!”

They then took my name and moved on to other folks, who were by now filling the street. Even though it was still well before 9AM, I decided to head back to the house, where others were starting to enter.

I’ve been to many political events and so was not surprised to be greeted by secret service agents, dressed in black suits and wearing visible earpieces. But these men were far nicer than usual. I was politely asked to open my purse and hold my arms straight out to the side. After being quickly scanned by a portable metal detector, I was directed to a table, where I gave my name and then asked to enter through a door to the right. I noticed a table with nametags, which I glanced at, but quickly realized those were the people who had given the maximum donation to meet Hillary. They were entering a door to the left.

The rest of us, who were nametag-less, were pointed toward a large open room, roughly the size of our house. On one end was a small stage; on the other, two medium-sized tables covered in gorgeous pastries, individual quiches (not from Costco!), lovely fruit bowls, and salad. Since I was one of only three people in the room, I asked one of the servers, who were walking around with trays of orange juice and mimosas, if I could help myself to the food. “Please do,” she said, as I filled my plate with quiche and a savory scone.

Huge paintings filled the walls. Later, I noticed a large Chihuly glasswork in the backyard, near a Deborah Butterfield horse sculpture that was very similar to one I love at UCLA. I was reluctant to snap photos until I saw others doing so. Obviously, we were all in awe. I felt like I was  in a private art museum. 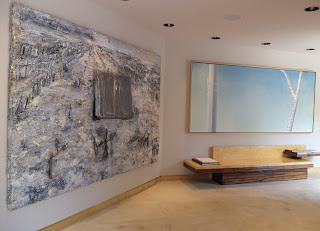 En route to the bathroom: beautiful art on the walls

People were friendly and introduced themselves before moving on to acquaintances or the food table. One man was biding his time, while his wife mingled with Hillary on the other side of the house. We could see the nametag donors through tall windows, across the pool courtyard, but couldn’t see Hillary. Then, after about an hour-and-a-half, people started making their way from the other side to our room, where we all waited for Hillary. She finally appeared at 11AM and spoke for 30 minutes. 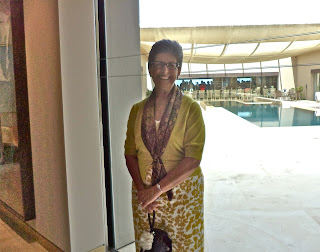 Me, with nametag people in the background, behind the pool

Hillary was warm and personable and talked about everything, including—yes!—education, which she addressed first, probably because the room was filled with liberal professors from UC San Diego. Though she mentioned “women” only once (when she alluded to a woman’s right to choose), she very much represented a female perspective, speaking several times about her 10-month-old granddaughter Charlotte and how she now sees the world differently because of her. At one point she castigated Republican candidates, who make light of climate change by saying they’re “not scientists.” “Well, I’m not a scientist either,” she insisted. “But I have two eyes and a brain and a granddaughter and I want her to live in a better world." She definitely had us all at hello! 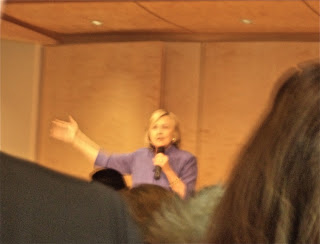 P.S. Watching the news coverage online, this morning, I was surprised to see myself being interviewed on channel 10.  Amazingly, I got the last word!