Los Angeles Magazine is currently running a survey where readers can vote for their favorite places and things in L.A. The list includes many of our top faves—like Disneyland, the Bradbury Building, and the Los Angeles Public Library—but it also omits many others. To rectify the situation, I’d like to offer the following L.A. landmarks—some of which are famous and some known only to us—that we feel help define the wonder that is “Los Angeles.”

1. I may hate to fly (see my January 27, 2007 blog entry), but I do love the Los Angeles International Airport (LAX). Despite the traffic, it remains our airport of choice when traveling to places too far to drive. It is also the scene of many childhood bon voyages, including the time the entire family turned out to wish my uncle Manuel and aunt Eva “adios” as they winged their way to Spain, ca. 1964. My favorite features at LAX are the spectacularly mid-century-modern Theme Building and the more recent installation of internally-lit pylons that sit at the entrance of the airport. They are always the first thing I look for when landing at LAX. 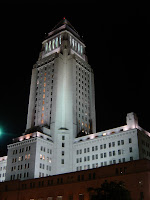 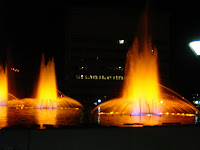 2. There is nothing quite as exhilarating as driving the Miata topless (the car, not me!) to downtown L.A. on a Sunday afternoon. The city can be very peaceful on the weekend and oh so beautiful on a clear, sunny day. To me, the most iconic of all L.A.’s many landmarks is City Hall. We’ve toured it twice and never tire of its majesty. The fountains outside the Department of Water & Power building, a few blocks away, are also amazing, especially on a summer night. Despite its tendency to turn into a ghost town after dark, downtown Los Angeles remains one of the most magnificent places in the entire city. 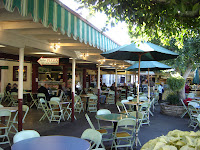 3. OK, so the world famous Farmers Market also appears on Los Angeles Magazine’s list of top 64 places. But it’s far too important not to include on my list, too. Farmers Market has always been something of a foodie’s United Nations, so naturally it was my family’s favorite destination when I was a kid. It was also our signature haunt when Tim and I lived across the street in Park LaBrea during the 1990s. We feared “the Farmers,” as Tim’s aunt used to call it, would become severely overshadowed the day The Grove opened next door, but the 1934 Market’s charm happily remains in tact. Life as we know it would cease to exist without Dupar’s pies or baked goods from the ancient but tasty Bread Bin. 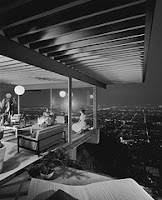 4. As reported elsewhere on this blog, Tim and I are all about mid-century-modern houses and so have spent many enjoyable hours touring homes designed by Richard Neutra, Rudolph Schindler, and Gregory Ain. In one of the most magical days of my life, the two of us spent the afternoon in the company of Julius Shulman, perhaps the single most famous photographer in Los Angeles history. His black-and-white shot of Pierre Koenig’s Case Study House #22 might just be the most iconic photo ever taken of the L.A. lifestyle. We were thrilled to be able to visit the Koenig house last year and have been inside many others that are almost as famous. Long live modern architecture! 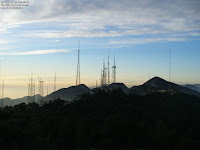 5. Certainly among Tim’s top 10 L.A. landmarks is Mt. Wilson, home to a world-renown observatory as well as to most of the area’s F.M. radio and television antenna. Visible from the end of our block, Mt. Wilson is part of the San Gabriel mountains which form the city’s snow-covered backdrop during especially cold winters. My sister and I built many a snowman in the shadow of Mt. Wilson when we were kids. Today I find the roads just a tad too narrow and windy for a casual drive; but Tim loves visiting his radio station’s antenna and seeing Los Angeles county from above. 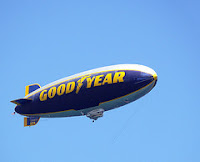 6. And speaking of viewing the county from above, one of our favorite L.A. “things” is the Goodyear blimp, which lives about 15 miles south of us and frequently flies over our house en route to sporting events, etc. We’ll be quietly sitting at home when suddenly we’ll hear the distinctive hum of its motor. “BLIMP!!” one of us will yell as we go running out of the house, looking up at the sky. For some reason, I still can’t get used to seeing a zeppelin fly overhead in the middle of the day. Silly me! 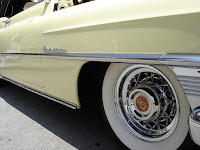 7. What would Los Angeles be without cars—especially phenomenally gorgeous cars that would rust anywhere else in the country. Even with the gas crisis, Angelenos adore their cars. The annual L.A. Car Show is a “must see” event every year, while Culver City’s annual vintage auto show always makes my heart weep for the many wonderful cars that have come and gone in my life. If I were a millionaire, I’d build a garage big enough to keep examples of all the cars I’ve ever loved.

8. Whenever we can’t think of anywhere else to eat, we always default to Dinah’s, a Los Angeles institution since 1959. Located on Sepulveda, about two miles from our house, Dinah’s is the perfect place to stop before or after going to the airport. Their fried chicken is among the best in the county and their oven-baked Apple Pancake is to die! 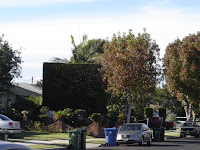 9. One of our favorite local “sights” is the "square tree" located on Sanford, within a mile of our house. Come rain or shine, the square tree just sits there completely oblivious to its natural surroundings. My sister has called it an “abomination.” But the square tree brings me comfort to think that there’s still some order in the world. 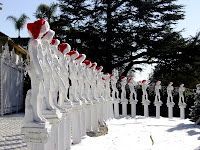 10. And while we’re on the topic of abominations, no tour of L.A. would be complete without the “house of Davids,” located on 3rd St., one block west of Rossmore. The front yard, festooned in hundreds of naked white statues (dressed up here for the holidays!), is the horror of upscale Hancock Park. It is also, of course, one of our favorite places to take out-of-town visitors.
Posted by Cyn at 4:29 PM No comments: