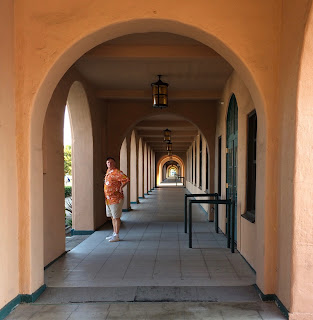 One of the best things about retirement is being able to up-and-go whenever and wherever you want. This week, for instance, was wide open, so we decided to take a quick trip down to San Diego. Researching things to do, Tim discovered a big "taste of" event at the new public park, Liberty Station, on Wednesday evening. He quickly bought tickets while I investigated hotel and Amtrak options. 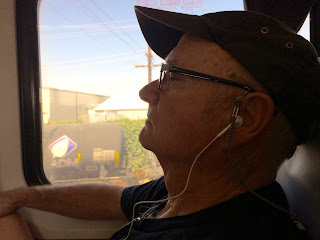 On the southbound train
I've been reading about Liberty Station ever since it opened last year. The site of the former Navel Training Center (NTC), the land and its historic 1920s buildings were purchased by the city of San Diego and developed into a public space surrounded by galleries, trendy restaurants and a small, but hip, enclosed marketplace. Even more importantly, however, the now Liberty Station/former NTC is where Tim underwent boot-camp when he was a young sailor in 1968. Lots of changes over the past 50 years! 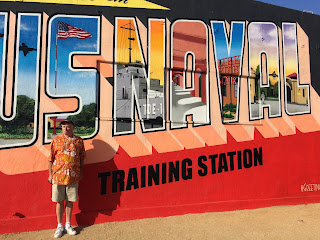 We decided to spend the night in Old Town San Diego, a short bus ride (#28) to Liberty Station. The event started at 5PM.

Although the environs are not as glorious, Liberty Station reminded us of San Francisco's Presidio, another former military base that has been "re-purposed." Arriving at Liberty Station, we were given a map and list of the 22 restaurants providing "tastes" of their menu items. These included Dirty Birds, which offered chicken wings "done 2 ways," THE LOT (an assortment of flatbreads), Fireside by the Patio (crispy pork belly), and Officine Buona Forchetta (cannoli). The best, though, was Liberty Public Market, the former NTC commissary that now houses several high-end eateries. We were again reminded of San Francisco: a similar but much smaller version of the recently renovated Embarcadero and its fabulous food shoppes and restaurants. Our favorite Liberty market samples: Roast Meat & Sandwich Shop (pork loin and lemon kokuho rice) and Le Parfait Paris (fruit-filled cream puffs). I don't eat meatballs, so the chef at Pasta Design whipped up a plate of focaccia bread and marinara sauce just for me. Very tasty! 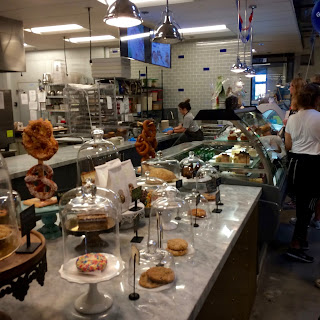 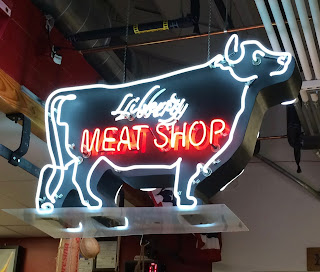 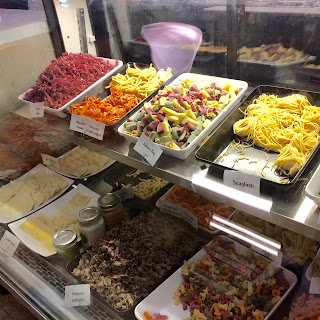 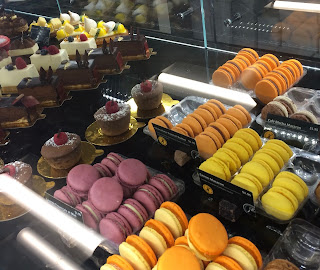 We spent two hours sampling food, walking around, reminiscing (Tim), and meeting new people. It was a wonderful evening and one I'm hoping we'll be able to repeat again next year. Highly, highly recommended. 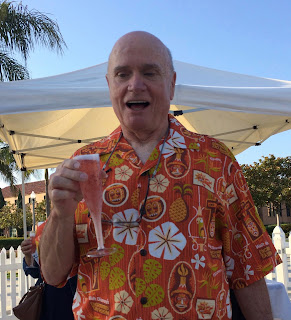 Guardians of the Galaxy @ DCA 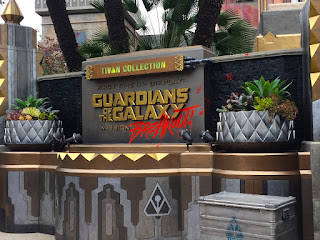 I may love Christian Bale as Batman and Robert Downey, Jr., as Ironman, but my favorite superhero movie franchise is Guardians of the Galaxy, the fantasy series about a rag-tag group of alien misfits, whose leader, Peter Quill (i.e., “Star-Lord”), was kidnapped from Earth when he was a child. Skilled at saving the galaxy, the Guardians are irreverent, unorthodox and highly lovable. Their cast of characters includes the green-skinned female Gamora, a loudmouthed, gun-wielding raccoon and a warrior tree, who says only one thing: “I am Groot.”

Now part of the Disney universe, Guardians recently got its own ride at Disney’s California Adventure (DCA). The ride involves an elevator that feels like it’s free-falling, so I’ll never go on it. Still, I love all the corollary stuff, including a short “staged” encounter between Quill and Gamora, in front of the Guardians ride, that ends in a dance-off with Groot. We waited in line—for an hour!!—to have our photo taken with Groot, everyone’s favorite Guardian. 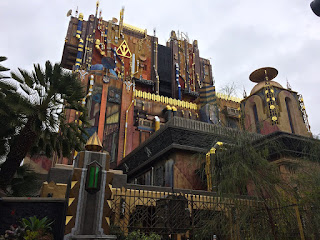 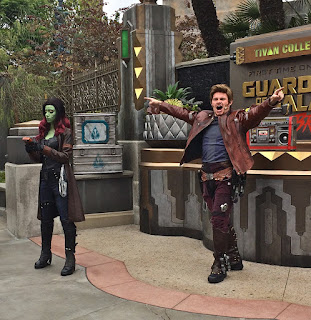 Quill trying to rouse the crowd, while Gamora looks on unimpressed 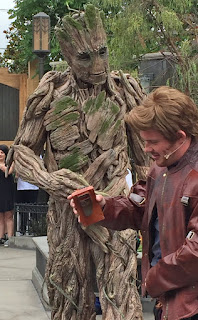 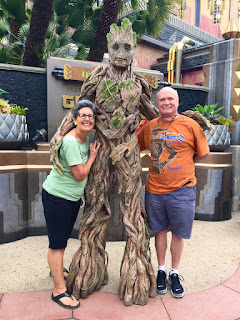 With Groot!!
We haven’t gone on the ride, but everything else is fun, especially if you’re a fan of Groot. 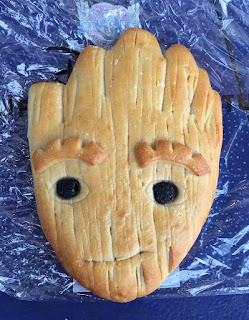 I am bread!: sourdough version of Baby Groot's face--
too cute to eat! 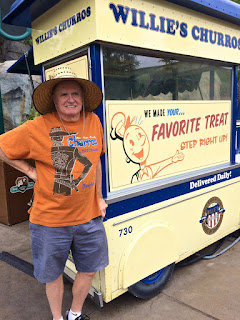 Tim eating churros instead
Posted by Cyn at 6:39 PM No comments: