Our Dinner with Bob 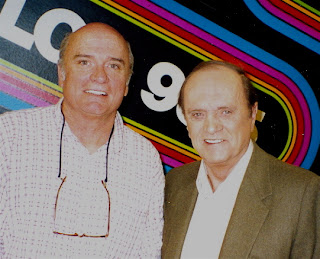 The Los Angeles Public Library foundation’s “Literary Feast” is possibly the group’s biggest and most successful fundraising event of the season, bringing in no less than $500,000 every year it’s held. The Feast offers contributors the opportunity to dine with famous authors—many of whom are well-known celebrities—in fabulous homes throughout the southland.

Having attended the last Literary Feast, we were thrilled to receive an invitation to participate again this year. Dining arrangements are made strictly according to how much money you contribute to the event. For instance, top donors ($2,000 a plate) get to eat with one of two authors of their choice. Those of us at the bottom of the financial ladder get to choose six authors and then cross our fingers that we’ll be asked to dine with our top choice. This year we chose:

1. Judith Freeman, author of one of my favorite historical novels, “Red Water,” about the 1857 Mormon Meadows Massacre

2. Peter Greenberg, travel editor on “The Today Show” whom we know through Tim’s work

Three weeks later, we learned we were to be one of 25 couples eating with Bob Newhart at a mansion in Bel-Air. Cocktail attire required!

I had planned ahead and bought a low-necked Lycra dress for just such an occasion, but Tim was in a dither. Somehow, the suit I bought him seven years ago had mysteriously shrunk (wink, wink) and so, with just a week to go, we went shopping for another suit. He settled on a nice navy-blue pinstripe by Jones of New York (see photo below). Thank heavens for Men’s Wearhouse!

Our hostess, Fabienne Guerin, wife of movie producer J.P. Guerin, called us on Saturday to make sure we were still coming. “Cocktails are on the patio at 7PM,” she cheerily added.

Indeed! The house, located at the very top of the Bel-Air hills, overlooked the entire westside. (We heard later that the Guerins, who had just sold their home for $35 million, were renting this place while their new house was being built!) A shuttle brought us from the street up to the residence. I felt like Cinderella masquerading as nobility.

Bob Newhart and his wife appeared a few minutes after we arrived. “He looks so old,” a woman said to me. But I thought he looked very much like himself. Some people brought books for him to sign, others just casually went over and chatted with him. Tim had met him a while ago at the radio station (see photo above) and so didn’t feel compelled to mingle. Instead, we staked our place under one of the outdoor heat lamps and snacked on hors d’oeuvres (mini-Kobe beef hamburgers, champagne flan and caviar, puffed pastry filled with shrimp, and mushrooms and cheese)—rather, Tim snacked while I chatted with the other guests.

After about an hour-and-a-half, a woman came out and announced that dinner was about to be served. Seating was prearranged, forcing spouses to sit apart. However, since Tim and I have separate last names, the hostess goofed and sat us together, making it a lot easier to share food during our seven-course (!) meal.

Two long tables were set-up side-by-side in a great hall that seats 50. The Newharts were at what I guessed was the $2,000-a-plate table, surrounded by movie producers and the like. We sat at the “other” table amongst a clutch of real estate investors and lawyers. A guitarist, who styled himself after Carlos Jobin, was playing softly in the corner.

“This is so much better than the dinner party I attended last week,” the woman across from Tim enthused. “The hostess had hired a ten-piece band to play while we ate. I was hoarse the next morning from yelling all night!”

(Gee, I thought to myself, and what were we doing last weekend? Oh, that’s right—we were scarfing down free appetizers at one of the California Library Association conference receptions. Well, at least we didn’t get hoarse from talking over a ten-piece band!)

Dinner was served. The courses consisted of (in order):

1. Three small bowls of soup: onion, butternut squash, and fennel. “What’s fennel?” the man next to me asked. “It’s an herb,” I answered, smacking my lips at how amazingly tasty the soup was.

2. Two salads: crab and mixed greens. Tim and I discreetly exchanged plates so he could eat my crab salad.

3. A small lamb chop with couscous baked in a filo purse. Even though I hate lamb, I took a small bite and then retreated to the couscous, which was heavenly.

4. Then the main course: medallions of beef on wilted spinach, with seabass on a bed of rice. I ate my vegetables and left the rest, but, thankfully, was not alone because by then everyone was just about stuffed.

5. A cheese platter, which Tim and I shared. Gorgonzola on pear pieces—YUM!—along with brie on a cracker that looked and tasted suspiciously like figs (yuck).

7. Dessert: cantaloupe sorbet sprinkled with cinnamon and served with a warm berry cobbler. To die for!

We chatted with our tablemates during the entire meal, until Fabienne finally got up and introduced the guest of honor. Bob Newhart then moved over to a microphone and began to tell stories from his book, “I Shouldn't Even Be Doing This!: And Other Things That Strike Me as Funny.” Everyone, including Newhart himself, laughed hysterically at his jokes about Frank Sinatra, et al. Mrs. Newhart, however, just sat there stoney-faced.

“She’s obviously heard these stories a million times before,” Tim whispered, as I giggled behind my hand.

Then suddenly it was 11:10PM. We bid our dinner companions adieu and raced down the hill to our car. We wouldn’t want our small Honda to turn into a pumpkin, now would we?

Just when I think we’re getting too old to go to any more rock concerts, a week like this one comes along and my faith in the restorative powers of music is renewed.

As part of being named “Employee of the Month,” Tim was given two free tickets to any sports or cultural event of his choice. I was secretly hoping he’d pick the Neil Young concert, but he went with Bruce Springsteen instead, mostly because we had never seen him in concert and Tim thought we probably should at least once in our lifetime. The deal was sweetened when Springsteen’s bandmate Little Steven Van Zandt, who played Silvio on “The Sopranos,” came to the radio station and gave out passes to a meet-and-greet he was hosting before the show.

The concert was held at the L.A. Sports Arena, perhaps best known as the site of the 1960 Democratic national convention. When Tim reminded me that the Arena would probably soon be demolished, I groused, “But this is where JFK was nominated, for cryin’ out loud! IT’S HISTORIC!!”

But, yeah, the building has certainly seen better days. It was grungy and, by today’s standards, relatively small. The seats were nothing more than folding chairs bolted into cement. We had general admission tickets “on the floor,” which meant we got to stand for the entire concert. 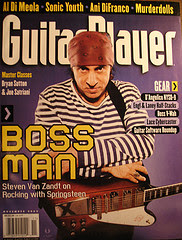 Traffic was worse than usual due to an accident that had closed the 405 freeway all day, so we practically had to run from the parking lot in order to make the meet-and-greet on time. Little Steve was there, wearing his signature bandana while glad-handing the fans. This was definitely a “jeans and t-shirt” kind of crowd—“working class” concertgoers that Springsteen is famous for. The line to meet Steven was too long, so we just looked at him from afar and then went to claim our spots on the Arena floor. 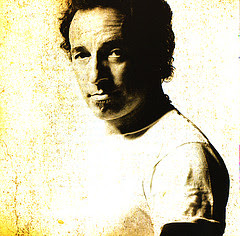 The concert was phenomenal. Springsteen plays with such energy that I thought every song was the final song of the evening. At one point, I turned to Tim and said, “I can’t believe you and Bruce are the same age!” We slunk out at 11PM, exhausted as people stomped and hooted for the band to come out and play yet another encore.

Meanwhile, a couple of miles up the road on the very same night, our perennial favorite Neil Young was entertaining folks at the Nokia theater, downtown L.A.’s newest concert venue located across the street from the Staples Center. Obviously we couldn’t be in two places at once, so I was very interested to read the L.A. Times review of the show on Thursday. The reviewer loved it, of course.

Luckily for me, Young was returning to the Nokia on Friday, so I called Tim immediately. “We HAVE to see Neil Young in concert!” I implored. “Can you PLEASE get tickets through your connections?!”

The show was sold-out and Tim’s contact had the day off, so he went to a broker, StubHub, instead and found us good seats in the orchestra. We couldn’t get them until two hours before the show.

Because there was also a basketball game that night, we decided to leave obscenely early. I picked-up Tim at work at 4:30PM and then headed east on surface streets. Not only did we arrive downtown in plenty of time, but we were also able to find a free parking spot on the street! I may be willing to pay hundreds of dollars for a concert ticket, but I refuse to pay $20 for parking—the ultimate highway robbery.

With time to kill, we decided to eat at the Liberty Grill, two blocks from the theater and the Staples Center, where the game was being played. We had fun trying to guess where the other guests were going after dinner. A group of three men in their 30s, eating ribs and burgers: basketball game. An old hippie couple wearing their best tie-died t-shirts: Neil Young concert!

We then walked ten long blocks to StubHub (I wasn’t about to give up my primo parking spot!) to pick-up our tickets. There we met three very young college kids who were hoping to nab last minute basketball seats. They had no idea who Neil Young is! We got back to the Nokia a half-hour before show time.

We’ve seen Neil Young many times before, including last year’s fabulous Hollywood Bowl concert with Crosby, Stills and Nash, but we’ve never seen him quite like this. For the first half of the show, he ambled onstage alone and sang several songs, accompanied by an harmonica and either one of eight guitars, which were set-up around his chair, or one of two pianos. Some of the songs were well-known, but many sounded like he had just written them the night before. He didn’t engage much with the audience—but, then again, he didn’t need to because his music said it all. I was very moved and amazed. 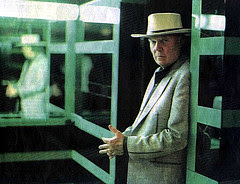 After a brief intermission, Neil, who had (quite frankly) looked fairly doddering during the acoustic set, returned to the stage with members of his old band Crazy Horse and suddenly transformed himself into the rock legend we all know and adore. Playing electric guitar, he pounded his way through classic songs and new as he lumbered around the stage like a big kid. He almost ruined the night by indulging in a 20-minute solo that everyone but us loved—good grief, we ARE getting old!—but redeemed himself during the encore by playing “Cinnamon Girl” and “Tonight’s the Night.” I was so ecstatic that I don’t even remember walking the five blocks to our car.