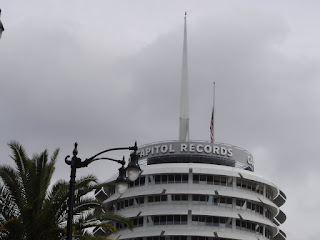 The otherwise benign LA Times column “My Favorite Weekend,” which features local celebrities describing their perfect Los Angeles weekend, has recently become a hotbed of controversy. Fans of the weekly column like seeing how the other half lives. Opponents, on the other hand, argue that celebrities are not real people anyway, so why waste precious newsprint on their fantasies.

Although any weekend I get to spend in LA with my husband is a “favorite,” last week’s was especially fun. Here’s a typical example of our favorite weekend:

Tim and I like to reaffirm our adulthood every year by subscribing to season tickets at one of LA’s many prestigious theaters. We especially like getting dressed up and pretending we’re going to Broadway, or some other culturally significant place. The downtown Music Center, home to the Dorothy Chandler Pavilion, Mark Taper Forum and Ahmanson Theater, is the closest thing Los Angeles has to “the great white way.” The atmosphere there can be very festive on warm summer nights when people are rushing to make the curtain at all three venues.

We think the entire scene is extremely sophisticated and so tend to arrive early so we can stroll around outside and admire the crowds. Sometimes we’ll even see famous theatergoers, like Neil Patrick Harris or Michael York. But it was cold and rainy Friday night, so I insisted on going indoors right away. No celebrity sightings this time, but no matter. The play, “Twelve Angry Men,” was very good and gave us lots to talk about on the short drive home.

While we were gone, Karen called to say a friend from college was in town—did we want to go with them to the antiques show in Santa Monica? We met them at noon. Karen insisted that I try on a gorgeous pair of green earrings, which Tim decided to buy for me; but the vendor’s credit card machine wasn’t working, so I wrote a check. So much for gallant gestures! After wandering around for an hour-and-a-half, we rushed home to get ready for that night’s Angels game in Anaheim.

There was a time when I lived for baseball. Tim and I both grew-up loving the Dodgers, but eventually changed teams when we moved to San Diego. In fact, much of our courtship took place at Jack Murphy Stadium. I called my family from there the morning Tim decided we should get married. Though we were already living together, we didn’t fully commit until we bought Padres season tickets after the wedding. 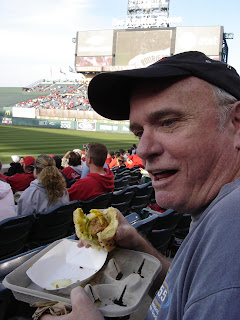 Unfortunately, life is much more complicated now and so, even though Tim still follows baseball, we have little time to actually attend games. That’s why Saturday was such a treat. Through his work contacts, Tim was able to score two field-level seats (and free parking!) to see the Angels, our favorite team since their 2002 World Series victory. 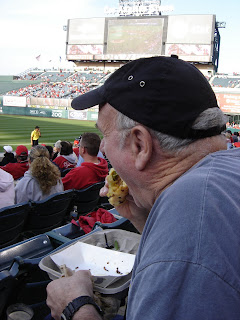 This was our first game of the season—very exciting stuff! But like all good LA fans, we left in the seventh inning when our boys went ahead by seven runs. We listened to the rest of the game on the radio during the long drive home. The Angels won.

Sunday morning, I convinced Tim to accompany me on a family errand to Burbank by promising to stop first at the Hollywood farmer’s market. A full four blocks long, Hollywood’s is, for my money, the best market in town: tasty produce, inexpensive flowers, a fun variety of street performers, plus the people-watching is far more entertaining than anywhere on the west side.

Although we used to spend lots of time in Hollywood when we first moved back to LA, we now mostly just pass through it to get to the San Gabriel Valley or the Hollywood Bowl. Imagine our surprise, then, when we discovered a three-story condo complex sitting on what used to be our favorite parking lot! Furthermore, the Broadway building, where Tim worked in the early 1990s, is now million-dollar lofts! 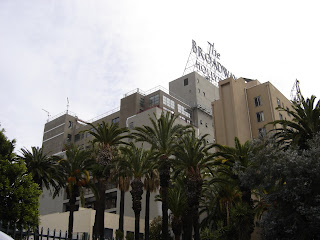 Located on Hollywood and Vine, the building, which was in very bad shape the last time we saw it, was once home to a glamorous Broadway department store. Its long-abandoned penthouse was even rumored to be one of Howard Hughes’s many LA hideaways. Now millionaires of another sort are going to live there.

“Good grief,” I gasped. “Hollywood is becoming gentrified! Is nothing sacred?”

We craned our necks like a couple of out-of-towners as we gaped at the building’s beautifully restored facade.

“Are you tourists?” a woman standing nearby asked, hoping no doubt to sell us something.

“No, we live here!” Tim declared indignantly as we headed toward the farmer’s market. 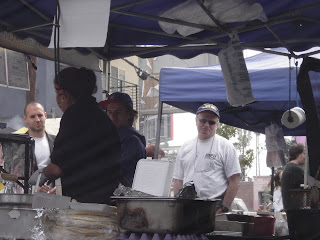 We shopped and ate while a guy in dreadlocks played “Yellow Submarine” on steel drums. We then returned to our convertible, tuned the radio to “Breakfast with the Beatles” and drove north to Burbank.

One of Tim’s coworkers got married this past weekend to Joe McDonnell, a well-known local sports talk show host. Although they work for rival radio stations, employees from both organizations were thrilled to see the couple tie-the-knot after watching their relationship blossom over several years. What really got tongues waggin’, though, was whether or not LA sports royalty, like former Dodgers manager Tommy Lasorda, would go to the wedding. As it turned out, the most famous person there was Fred Dryer, former Rams football player and star of the 1980s police drama “Hunter.” But no one seemed to mind as Dryer graciously posed for photos with several of the wedding guests.

We didn’t attend the ceremony, but we did go to the reception afterward. Tim was in his glory pointing out all the local radio personalities and minor sports figures.

“Who’s that guy with the bad comb-over and sunglasses,” I asked, while munching on my taco salad.

“The Downey Flash?” I asked incredulously. “Why did they call him that?”

“Well, rumor has it there wasn’t a woman in Downey, during the 1950s/60s, he hadn’t slept with.” And, sure enough, a while later we saw him dancing with a sweet young thing, even though he must be 105 years old by now!

The reception was held at the Sportsmen’s Lodge, the wedding and bar mitzvah capital of the east San Fernando Valley and site of Tim’s ten-year high school reunion, 30 years ago. Located in Studio City on the corner of Coldwater Canyon and Ventura Blvd., the kitschy Lodge is conveniently close to Universal Studios and Hollywood. A few years ago, it was threatened with demolition, but the LA Conservancy’s Modern Committee saved it from the wrecking ball. Having spent part of my own youth in the Sportsmen’s Lodge, I was happy when the Mod Com interceded. I must admit to being a bit conflicted, however, when we returned to the Lodge this weekend. Walking into the lobby was like stepping into a 1970s time machine, but not in a fun, nostalgic way. The place is in serious need of a facelift.

Still, we had a good time mingling with Tim’s coworkers and dancing the night away. I am convinced that as long as wedding deejays play “Wooly Bully” and Jr. Walker’s “Shotgun,” we baby-boomers will never grow old. Now, if only there was a similarly easy way to revitalize the Sportsmen’s Lodge...