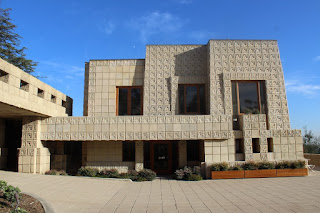 Entrance to the Ennis House
L.A. is blessed with fabulous architecture: City Hall, Bullocks Wilshire, the Eastern Columbia Building, Disney Hall, the Dorothy Chandler Pavilion, as well as stunning homes designed by Richard Neutra, John Lautner, Charles and Ray Eames, Julia Morgan, Pierre Koenig, and, of course, Frank Lloyd Wright, who created four “textile block” houses in Los Angeles and Pasadena during the early 1920s. Perhaps the most renown—and elusive—of these is the Ennis House, located in the hills above Los Feliz. 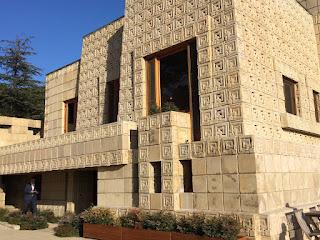 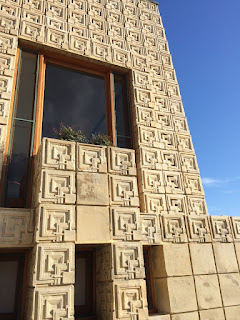 Cast in concrete, Wright’s textile blocks are a work of art in and of themselves. Designed using indigenous-looking three-dimensional patterns, the blocks interlock and were reinforced internally with iron bars and concrete. Not only does the textile-effect distinguish the exterior of the homes, but also the interior. The result is an unconventional yet glorious architectural design, especially when juxtaposed to the lush landscape clearly visible through Wright’s large signature windows. 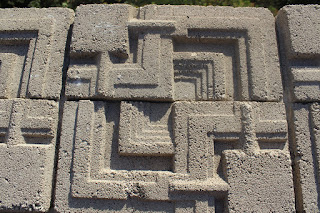 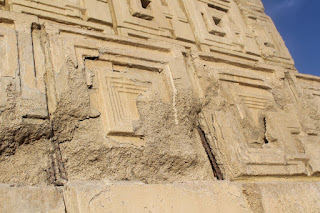 Signs of deterioration
We’ve toured the Storer House in the Hollywood Hills, above Highland Blvd., and of course the Hollyhock House, which is open to the public in Barnsdall Park. But opportunities to tour the Ennis House have been few and far between, possibly because it was considered one of L.A.'s “most endangered historic places” for many years. Happily, the house has now been restored and was the main event of a fundraising tour offered by the architectural MAK Center last Sunday.

At 8000 square feet, the Ennis House looked like an ornate bunker as we approached it via impossibly skinny, winding roads on the south side of Griffith Park. Our tour group was small: only ten people, many of whom looked to be architects or photographers. We had open access to the property for an hour, but were not allowed to take pictures inside. No problem, however, as there was plenty to photograph outside, including breathtaking views of Los Angeles. 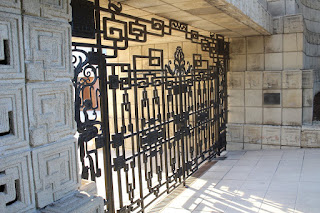 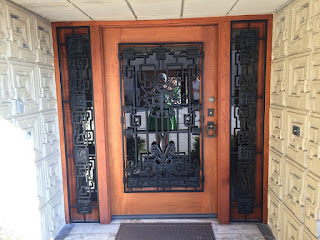 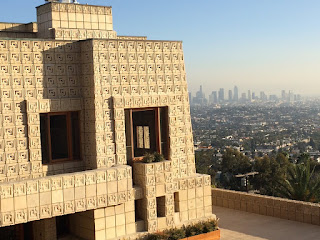 Hazy day in downtown L.A.
The front door is ground-level off the gated driveway. We entered into a small, dark lobby and then ascended a steep set of concrete stairs to the main living area. Sun poured into the space from all angles. The enormous height of the room and dramatic textile-block walls made the house look very much like a museum or Mayan temple. No one dared sit on the craft-style furniture, designed by Wright. 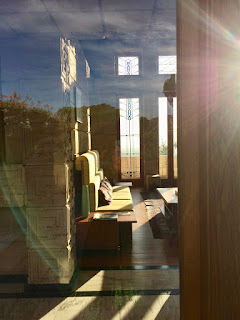 Peering into the living room from outside 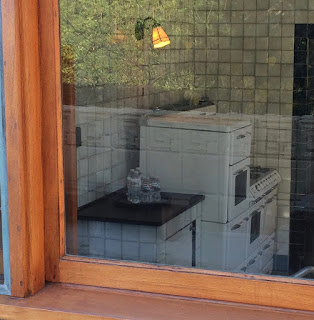 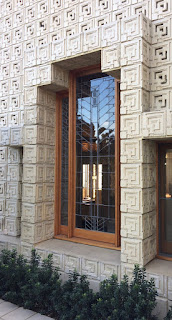 The home has little resemblance to the dank rooms of Deckard’s apartment, famously depicted in the SF-noir movie Blade Runner, which was partially filmed at the Ennis House. Though the rest of the house is completely futuristic, the kitchen still has its early 20th-century appliances. Outside are a pool and two ponds, plus patios and several landscaped paths. The chauffeur’s quarters are across the driveway from the house. We relished every moment of our brief tour. 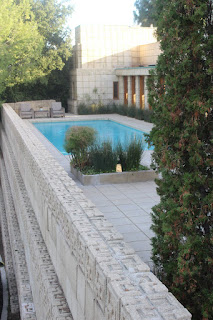 Pool on the northside of the house 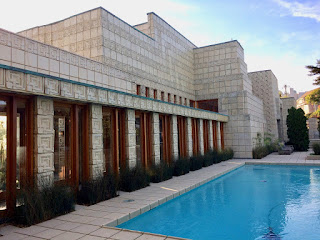 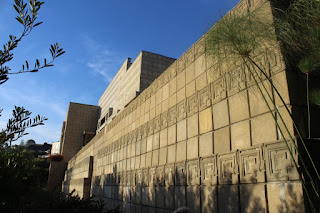 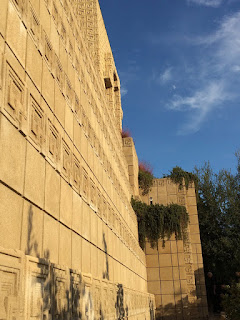 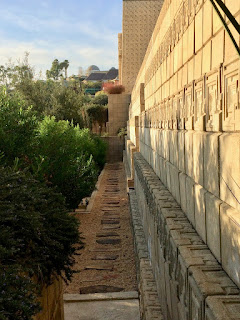 Clearer view of the observatory 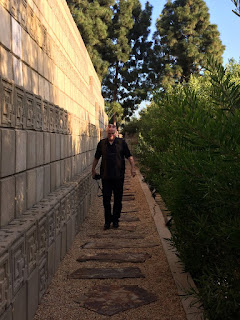 Tim on the path 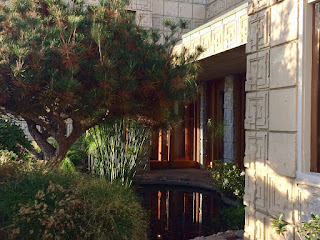 Koi pond
From the Ennis House, the group then caravanned down to a reception at the Sowden House, designed by Wright’s son Lloyd. Located on Franklin Avenue, the house is another fine example of textile-block architecture, but not near as magnificent as Ennis. 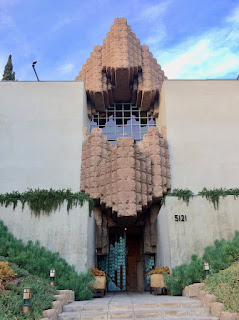 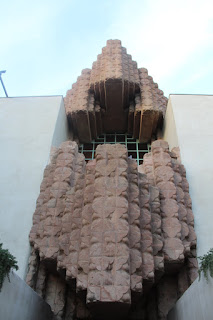 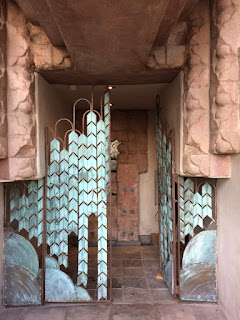 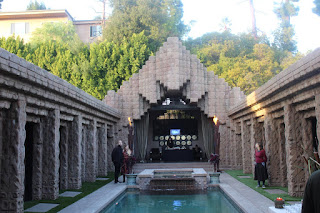