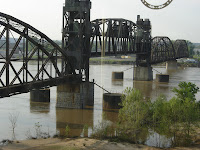 It’s no secret that I love the Clintons. As I’ve reported elsewhere on this blog, I’ve met and seen Bill speak twice. Plus, Hillary has my vote for president. No surprise, then, that when my boss asked me to attend a library conference in Little Rock, Arkansas—where Bill was governor for 12 years—I jumped at the chance.

Everyone who loves the Clintons should make a pilgrimage to Little Rock at least once in his or her life. The entire town is something of a shrine to the 42nd president and his family. Included in our conference packet was a brochure entitled “A Guided Tour of President Clinton’s Little Rock,” highlighting relevant sites: the governor’s mansion, the Old State House where Bill declared his candidacy for president, Clinton/Gore campaign headquarters, the firm where Hillary practiced law, Chelsea's middle school, and even the McDonald’s where Bill often stopped to get, er, coffee. 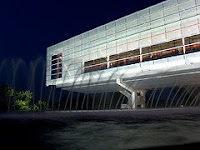 The main tourist attraction these days, though, is the Clinton Presidential Center and Park, located northeast of downtown next to the Arkansas River. Built on land that had been overrun by derelicts and homeless people, the Clinton library is a magnificent edifice that evokes a bridge to the future. I recognized it immediately as we drove into town from the airport and, despite the hot and muggy weather, wandered over there during the first day of conference. 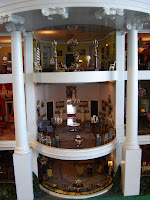 A reception was being held at the library later in the week, so I restrained myself from going upstairs. But I did buy a ticket to see the miniature White House on display on the ground floor. Very cute! I then walked back to the hotel, stopping at the River Market, where I spied the award-winning Shaka Smoke Lodge eatery. Taking a big bite of my lunch, I left a message on Tim’s cellphone, bragging that this was the best chopped pork sandwich I ever had. Why would governor Clinton even bother with McDonald’s when the Shaka barbecue was only blocks away?

Some 60 librarians and I returned to the library two days later for the final conference night’s reception. A docent led us upstairs to a small theater, where Bill narrated a 12-minute film about Little Rock and his ascendancy to the White House. I was thrilled when we all burst into spontaneous applause afterward. I was among kindred spirits. 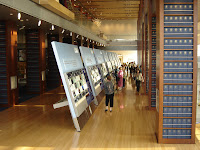 From the theater, the docent took us to a reproduction of the president’s cabinet room and described the rest of the building. The second floor chronicled the Clinton presidency and its accomplishments. But I was far more interested in the human side of the story, so quickly slunk up to the third floor, where memorabilia from both Bill and Hillary’s younger lives were exhibited. Also there were displays of the First Lady’s gowns, Bill’s saxophones, and various gifts from people around the globe. 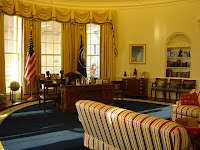 The main event, though, was a reproduction of Clinton’s oval office, complete with family photographs and a Rockwell painting that the Spielbergs gave Bill soon after he became president. I had a hard time tearing myself away. 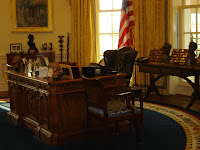 As wonderful as the oval office was, my favorite exhibit was of the correspondence the Clintons sent to and received from dignitaries and celebrities worldwide: a handwritten letter to Hillary from Jordan’s queen Noor, affectionately signed “from your sister,” a note from Bill to Paul Newman jokingly asking him not to run for president, and a congratulatory letter from Elton John expressing hope that he and Bill would work together to fight AIDS. The guard had to rouse me from my reading to announce that dinner was about to be served downstairs.

I flew home the next day and proclaimed that we had to watch “Primary Colors,” the fictional account of Bill’s first run for the presidency. John Travolta and Emma Thompson’s portrayal of the “Stantons” was far from flattering. Still, as full of clay as the Clintons' feet are, I remain a huge fan and care about them even more after spending a few days in Little Rock.
Posted by Cyn at 7:10 PM No comments: 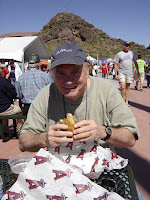 One of the difficult things about maintaining a blog is that, when you’re too busy doing fun stuff, there’s no time to write about the fun stuff you’re doing! Case in point: the entire month of March. 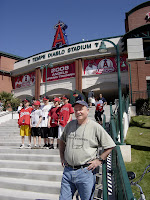 Week 1: I had a free Southwest airline ticket that was about to expire, so Tim and I decided to fly over to Phoenix for a little spring training baseball. The only room we could get at the Sheraton (within walking distance of the stadium) was four doors down from the Club Lounge, where we could eat all the complementary breakfast and “happy hour” treats we could stand (bummer!). With no car, we were pretty much stuck in the hotel or at the stadium; but it was just the mini-vacation we needed. Plus the Angels won both games. Tim was in heaven.

Week 2: On Thursday, Karen and I schlepped to UCLA to see NY Times columnist Frank Rich interview Stephen Sondheim, Karen’s all-time favorite playwright. I especially enjoyed his tales of old Broadway and Ethel Merman, Jerome Robbins, et al. Then, on Friday, Tim and I saw the touring company’s performance of “Sweeney Todd,” perhaps Sondheim’s best known musical. The young woman sitting next to me was disappointed to hear that Johnny Depp wasn’t in this version. Still, we both survived and agreed at the end that this was almost just as good.

Tim and I finished the week by attending yet another play, “Top Secret: Battle for the Pentagon Papers,” performed by L.A. TheatreWorks, a local company that stages radio plays for later broadcast on NPR. The plot revolved around the Washington Post’s decision to publish the Pentagon’s infamous chronicle of U.S. involvement in the Vietnam War. Although a completely different theater experience altogether, I must say I liked “Pentagon” better than “Sweeney” because of its relevance to today. Congresswoman Jean Harmon was part of a panel afterward that compared the Nixon White House to that of George Bush. It was my turn to be in heaven!


Weeks 2-4: As it does every March, PaleyFest—the Paley Center for Media’s (formerly the Museum of Television and Radio) three-week long homage to TV—came to town in a big way. 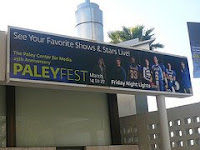 The festival has become so huge, in fact, that it moved this year to the Cinerama Dome in Hollywood so more people (some 800 every night) could attend. We went to the following five events over a span of eleven nights: “Pushing Daisies” (Chi McBride was a riot), “Friday Night Lights” (my current fave show), “Damages” (Glenn Close—serious actress!), “X-Files” (the lead actors were not there, but we did see a trailer for this summer’s movie), and an evening with Judd Apatow, creator of “Freaks & Geeks” and box-office hits “The 40-Year-Old Virgin,” “Knocked-Up” and “Superbad.” Of them all, the Apatow event was the most outrageous as he shared the stage with his mentor Garry Shandling, protégés Seth Rogan and Jason Segel, actor friends Jonah Hill and Paul Rudd, and an assortment of other wackos. Clips of the entire festival are available on the Paley website. 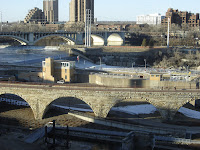 Week 4: The month ended with me taking a three-day trip to Minneapolis, where I attended the Public Library Association conference. Two hours after landing, my roommates and I were riding a shuttle to a free reception, given by an architectural firm that designs libraries. Their offices were located in an old burnt-out flour mill that overlooks the Mississippi River. Before leaving home, I thought for sure I’d be trapped in Minneapolis by inclement weather. But standing there, looking out at the view, I was glad I came. Nonetheless, there were still remnants of snow on the ground, so most of us opted to take the downtown area’s intricate series of skyway bridges from our hotel to the convention center. The skyways, which link the 2nd stories of most of the buildings downtown, look like one continuous mall and are really quite amazing. 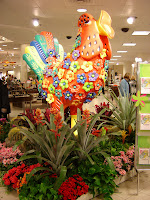 Just as I was beginning to miss my garden back home, I wandered into the Macy’s across the street from the hotel and, to my amazement, found a display of succulents and tropical plants in the cosmetics department! I cheered up immediately, but silently thanked my lucky stars that poor Tim wasn’t there, because even he’s starting to grow weary of my born-again fascination with all things botanical.

The weather held long enough for my flight home to be rather uneventful. More than half the plane was filled with librarians, so I relaxed, closed my eyes and happily listened to my iPod for five hours.

The next morning, Tim and I got up early to tour architecturally-significant mid-century homes in Pasadena. It was good to be back in L.A.
Posted by Cyn at 8:24 AM No comments: