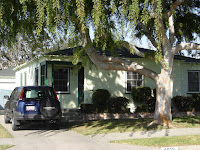 Those of you following this blog for a while will remember that last October I decided to demolish our backyard and plant drought-resistant California natives. Well, I didn’t do the actual demolition and planting; but, along with our fabulous landscaper Joel, I did help guide the project, which changed my whole outlook on gardening. Unable to tell a live plant from a dead one just a year ago, I am now almost obsessed with flora of all stripes.

Not a surprise then when I announced to Tim that we should plant natives in the front, even though we’d be the only house on the block without a lawn. Even more scandalous, I suggested that we build a low fence to protect our new yard, making ours, of course, the only house in the entire neighborhood with a fence. What would people think? Nonetheless, convinced that we were doing the right thing—especially as water becomes more and more precious—we decided to proceed in hopes that others would eventually follow our lead.

It is too hot to plant anything during the summer, so we waited till early October to actually begin the project. In the meantime, Joel and I toured nearby gardens and took pictures of possible fences. Then, finally two weeks ago, he came over and sketched out a plan for the yard. We would keep the hawthorne bushes against the house and our glorious Chinese elm, which everyone loves, but just about everything else would go. Demolition began shortly after. No turning back now! 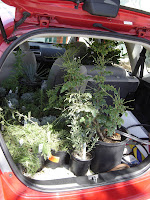 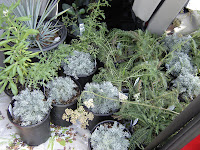 Joel and I then schlepped over to Theodore Payne, the nonprofit nursery in Sunland, to pick out plants. We bought plenty of my backyard favorites—salvia (i.e., sage), artemisia (strange low-lying plants that look like tribbles), and yarrow—plus some California holly (i.e. toyon), a spiny barberry, and coyote bush. On his own, Joel selected a crepe myrtle tree, two petite maples, lilacs, and star jasmine, which will grow along the fence. Hesperaloes grace our short parkway along the street.

As you can see, the yard is now complete. All we need is a few months and a little bit of rain to get things growing. More pictures forthcoming in the spring! 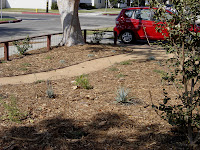 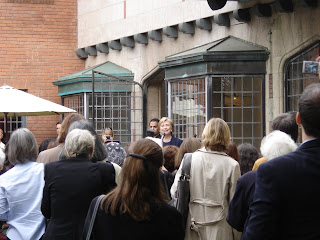 The invitation arrived in my e-mailbox about three weeks ago. Hillary Clinton was being honored at the home of Bruce Raben, a businessperson who lives in Hancock Park. I could attend a private “VIP” reception with the Senator for $1000 or I could go as a “Friend” for a fraction of the cost. I decided that, as much as I love the Clintons, I’m no more than just a friend and so RSVP’d accordingly. I then sent the invite to Tim to see if he wanted to tag along. He took one look at Raben’s address on Google Maps and e-mailed me immediately.

So we got dressed up and drove to Hancock Park, one of L.A.’s most opulent neighborhoods, located directly south of Hollywood. A few police officers were on the street when we got there. We checked-in at the registration table and then joined others as they walked up a short flight of stone stairs to the front yard. 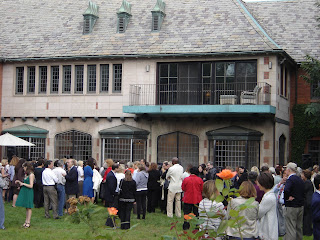 The 1920s Tudor-style house and its grounds were truly magnificent—at least 10 times the size of our small mid-century home. Since we weren’t part of the VIP reception, we were directed to the backyard where various soft drinks were being served. There we saw a slightly raised stone patio and people (mostly women) standing on the lawn behind a cord. Beyond the lawn was a pool, pool house (a little smaller than our home), and a tennis court. It had rained earlier in the day, so we made our way up to the pool deck, where it was dry.

We were standing there trying to see if anyone famous had arrived, when an older woman in a suit came up and started chatting with us. Turns out she was a high-powered lawyer from Manhattan who now lives here. She wondered if we knew the history of Hancock Park. We may not be welcome inside Bruce Raben’s home, but we have toured (as L.A. Conservancy members, etc.) many houses in the area, so were able to tell her what little we knew.

After about half-an-hour, I noticed an imposing-looking man in a suit, wearing an earpiece, standing outside the tennis court.

“Secret Service,” I said to myself. “Hillary must be here.”

Sure enough, about ten minutes later, a nice young woman came over and suggested that we join everyone else on the lawn. When I balked, her pretty face hardened and I knew then that this was not a request but an order. I realized later that the pool, which was raised a few feet above the yard, was the perfect vantage point for anyone wanting to do Hillary harm.

Local dignitaries in the audience were introduced (L.A. city council members and our hero John Chiang, the state controller who refused to lower state employees’ salaries to minimum wage during California’s recent budget crisis). Next, an event organizer in a black t-shirt (and we got dressed-up!) came out and told us about the first time he met Senator Clinton. And, then, before I knew it, there she was, smiling and waving to everyone from the patio. The crowd (maybe 200 people) went wild.

She thanked us all for our support and talked a bit about the presidential election. She then told us about her campaign to get Democrats across the country elected to the Senate. Hillary looked rested and happy and was, quite frankly, very normal. She didn’t make a speech; instead, she just chatted as if she were among friends. After about 15-20 minutes, she stopped talking and started shaking hands and posing for pictures. I really couldn’t find an excuse to climb over the people closest to her and so watched from afar. As someone standing next to me said, “It’s good enough just being in this backyard with her. I don’t need to shake her hand.”

Hillary schmoozed for quite a while and then waved good-bye. We applauded and cheered—not only because we love her, but also because the gates, which had been sealed shut during the Senator’s appearance, were once again open. When it was safe to do so, we were released to go back out into the world and promote the Democratic ticket. 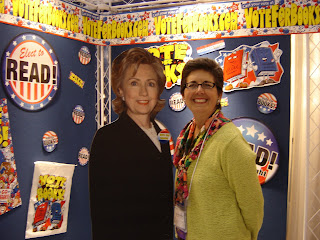 (Me and a faux Hillary at the Public Library Association conference last March)
Posted by Cyn at 2:07 PM No comments: