The Eagles at the Fabulous Forum 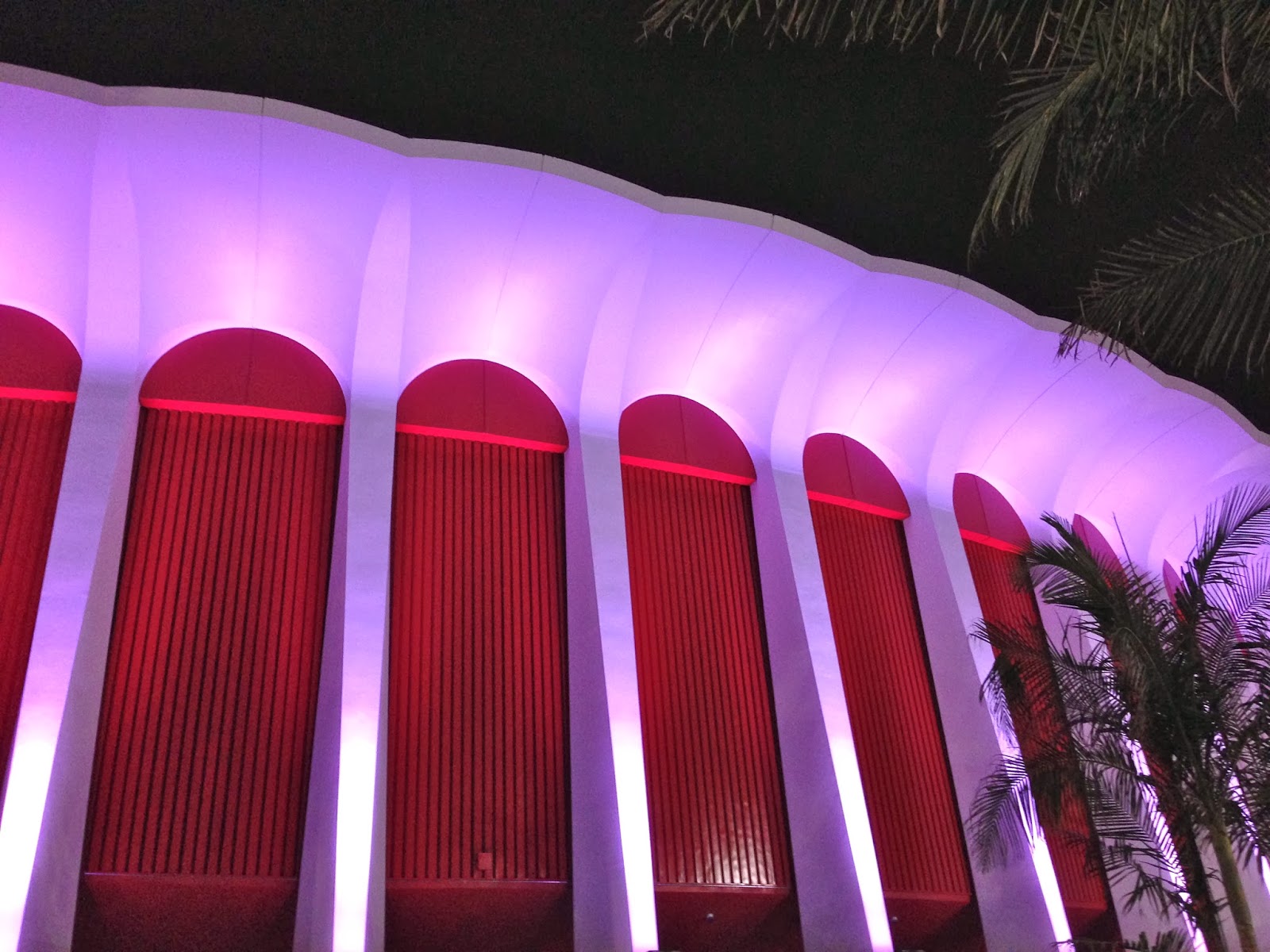 Outside the beautiful new Fabulous Forum

The Fabulous Forum—the long-time home of the Lakers as well as “the” premier L.A. concert arena in the 1970s/80s—pretty much laid abandoned after the Lakers moved to Staples Center in 1999. For several years, the building served as an occasional church; then was purchased in 2012 by the Madison Square Garden Company, which spent millions to renovate it.

The once again “fabulous” Forum reopened last week, to rave reviews, as a concert-only venue. The quintessential California band, the Eagles—who, perhaps not so coincidentally, also opened downtown’s Nokia Theatre in 2007— was tapped to inaugurate the rejuvenated space. Three shows were added after the first three shows sold-out almost immediately. We saw the Eagles and the beautiful new Fabulous Forum last night.

We hadn’t been to the Forum since 1989, when we drove up from San Diego—where we lived at the time—to see Paul McCartney perform with Wings. In those days, the Forum was nothing more than a great big barn seating up to 18,000 concertgoers. We literally sat in the very last row at the top of the stadium and couldn’t see very well. But the sound was loud and I was happy just to be able to breathe the same smoke-filled air as the ex-Beatle.

Today the Forum is indeed quite fabulous. The lobby that rings the perimeter of the building is narrow and dimly lit, offering a clubby atmosphere to a venue that used to scream “sports stadium.” Refreshments are provided by several hip L.A. vendors, including La Brea Bakery, Pinks, and Culver City’s own Coolhaus. Inside the arena, the stage occupied a full third of the floorplan, making the space feel intimate despite an audience of thousands. And the sound was amazing—every note was audible above the general rock concert din. We no longer watch concerts from the last row and so had close seats to the right of the stage. They were almost perfect. 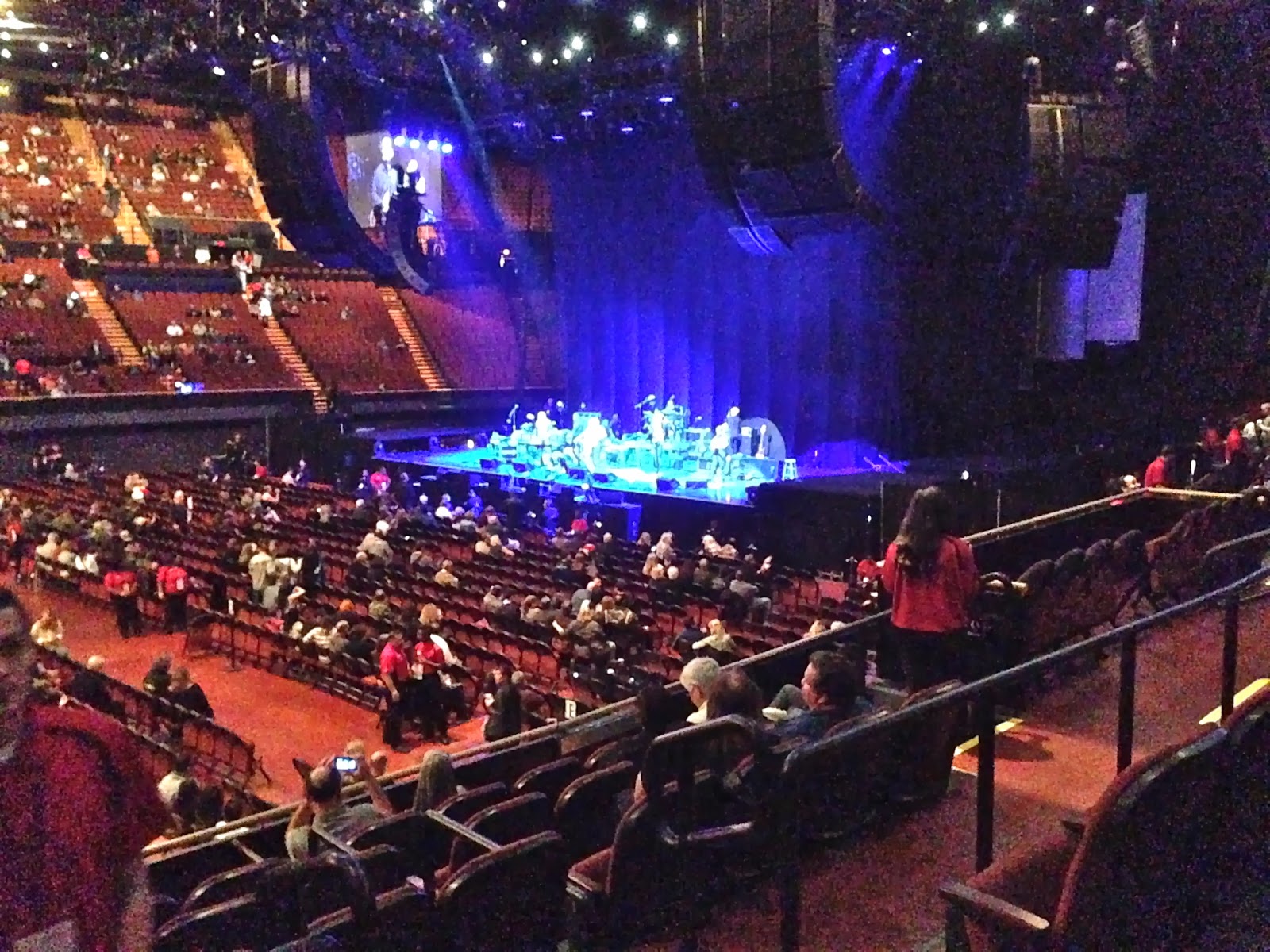 Our view of the stage (opening act) 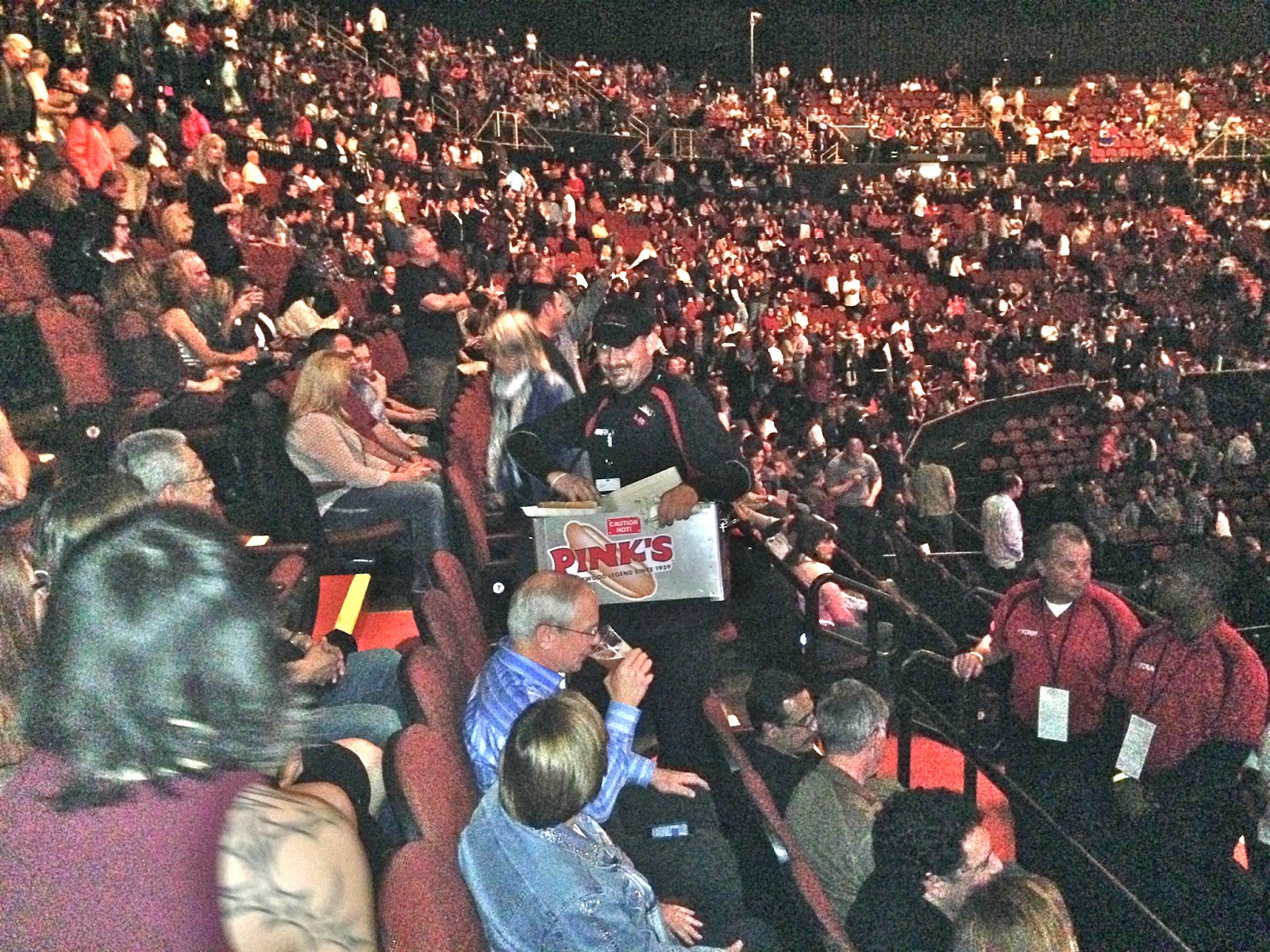 Pink's hot dogs sold in the stands during intermission

The audience appeared to be 99% baby-boomers—in other words, people our age. The man sitting next to Tim joked that there were probably eight ambulances waiting outside, instead of the usual three or four, in case of emergency. It took a long while before the smell of marijuana wafted in our direction.

The Eagles were fabulous, too. Bandleaders Don Henley and Glenn Frey got things rolling by singing a couple of acoustical songs from their Desperado album, early work from their more folksy period. The concert then progressed through their discography, featuring every hit they ever recorded. With the exception of Joe Walsh, who was allowed to riff on his guitar, the vibe was mostly laid-back—in fact, one reviewer accused Frey and Henley of “loitering” on stage. Still, when the entire band was singing together in harmony, they sounded exactly like an angelic choir from heaven. It was glorious.

Amazingly, the Eagles had enough hit songs to fill three hours (with intermission), before ending on “Life in the Fast Lane.” And yet [spoiler alert!] they left three of their biggest songs for the encore. Nevertheless, people started to bail as soon as the main part of the concert was over. This is L.A., after all, where the fear of traffic trumps even the best concert experience.

“SERIOUSLY?” I asked the couple next to Tim, as they got up to go. “You’re leaving before hearing HOTEL CALIFORNIA?!!!”

And, sure enough, the first encore was “Hotel California,” perhaps the Eagles’ most famous song, followed by a few more, including my favorite, “Desperado.” I hardly noticed the traffic once we headed home. 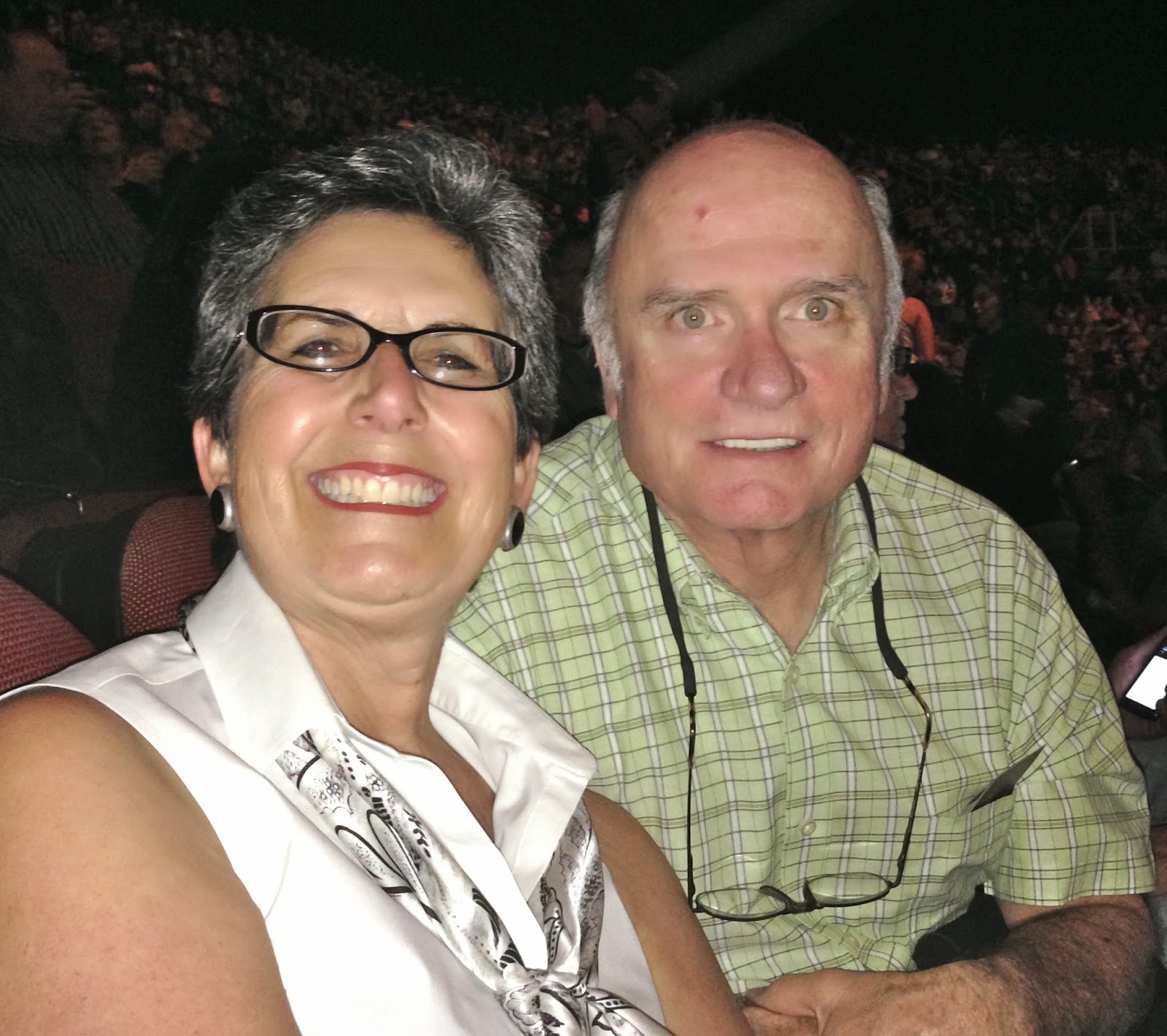 Typical Eagles fans
Posted by Cyn at 2:25 PM No comments:

I’ve never read anything by Elmore Leonard, but I have enjoyed movies made from his work, including Out of Sight, Get Shorty, Jackie Brown (adapted from the novel Rum Punch), and 3:10 to Yuma (the remake with Russell Crowe and Christian Bale). And, of course, we’re HUGE fans of the TV show Justified, inspired by Leonard’s short story “Man in the Hole.”

Last night, the Writers Bloc held a sold-out tribute to Elmore Leonard, who died in August. We were among the few lucky non-show-biz types to snag tickets. It was an amazing evening.

Graham Yost, the creator of Justified, kicked-off the festivities, followed by Carla Gugino, who read a short story about Karen Sisco, the title character of Gugino's much-too-short-lived TV show from ten years ago. Timothy Olyphant, Justified’s irrepressible Raylan Givens, was next. Other cast members included Erica Tazel (who plays Raylan’s partner Rachel Brooks), Jere Burns (bad guy Wynn Duffy), and our favorite, Walton Goggins (Boyd Crowder), who read an excerpt about a priest who shoots down four murderers without blinking an eye. Leonard’s son, Peter, also an author, reminisced about his father and read three of Elmore’s zanier fan letters. Like the man being honored, they were raunchy, irreverent and absolutely hilarious.

BBC's tribute to Elmore Leonard
Posted by Cyn at 5:47 PM No comments:

I was running out the door to attend a meeting, earlier this week, when the phone rang. It was Tim.

“Marky Mark is here!” he whispered into his cell. Apparently Mark Wahlberg, whom we still affectionately call “Marky Mark” from his Funky Bunch days, made a surprise visit to Tim’s radio station to promote his new movie, Lone Survivor.

“The same, except he’s short.”

Tim then mentioned that Wahlberg had brought along 12 guys with him. I could tell he was miffed.

“Well, hullo! The TV show Entourage was, after all, based on his life! Of course he’s going to have 12 guys with him.”

And here they are: Wahlberg (in the middle) being interviewed on radio 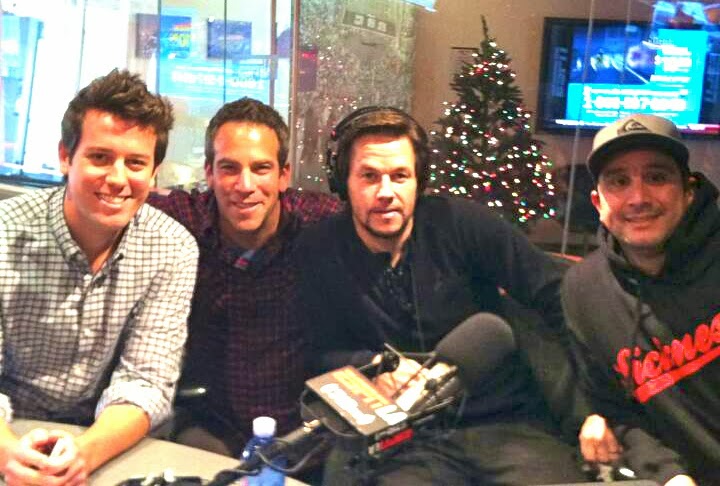 Wahlberg (beard) and Tim's lucky coworkers
Posted by Cyn at 4:07 PM No comments: