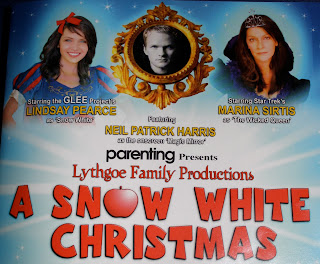 Let the holidays begin!  Last night, Karen and I previewed our first Christmas event of the season: A Snow White Christmas, playing at the El Portal theater in North Hollywood.

More Snow White than Santa (I think Christmas was mentioned only twice!), this kid-friendly musical stuck pretty close to the Disney version of the fairy tale with a few contemporary songs (Lady Gaga’s “Born This Way,” Britney Spears’ “Toxic,” and Katy Perry’s “Firework”) thrown in.  The performance was staged as a panto, encouraging lots of interaction between the audience and the actors.  We sat in the first row, so plenty of opportunity to have our voices heard.

An extremely talented Lindsay Pearce (contestant on last summer’s Glee Project) was the ever-optimistic Snow White.  The evil queen was played by Marina Sirtis (Deanna Troi from the still lamented Star Trek: The Next Generation).  But we were there, of course, for Neil Patrick Harris, who played the magic Mirror.  He was great, even though he was just a (pre-recorded) disembodied face in a frame.  Marina was terrific, too, appropriately over-reacting to audience boos every time she walked onstage.  Lots of allusions to Star Trek, which I just loved.

Performances are scheduled through December 18, so if you like Glee, Star Trek, Neil Patrick Harris, or even Snow White, I highly recommend taking a trip out to  North Hollywood.
Posted by Cyn at 5:26 PM No comments: 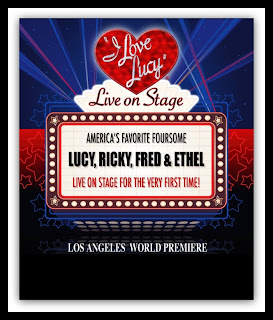 Tim likes telling the story about how, during a long holiday weekend in the late 1970s, he taped one of the first I Love Lucy marathons at a friend’s house and then had to go out and buy a machine so he could watch the shows at home!  That’s how he got stuck with a Betamax—superior technology, but not long for this world—instead of a VHS recorder.

Betamax is now gone, of course, but Tim continues to love Lucy.  No wonder then that he bought tickets to I Love Lucy: Live on Stage as soon as he heard about it.  Performed at the Greenway Court Theatre in L.A.’s Fairfax district, the show faithfully recreates the filming of two I Love Lucy episodes—The Benefit, the one where Lucy insists on singing with Ricky at Ethel’s fundraiser, and Lucy Has Her Eyes Examined, which features a funny dance number as well as Desi’s theme song “Babalu.” Seeing actors perform the episodes as Lucille Ball, Desi Arnaz, Vivian Vance, and William Frawley was a real hoot.

It was a wonderful evening—we truly got the flavor of what it must have been like to see I Love Lucy (including 1950s commercials!) performed live.  The audience was thrilled to pretend that we were still living in a black-and-white TV world.  Plus the actors never once broke character, not even during the curtain call.  Standing ovations were much deserved.

The show is playing Wednesday through Sunday every week till the end of the year.  If you love Lucy, seeing this live stage performance is an absolute must!
Posted by Cyn at 5:29 PM No comments: 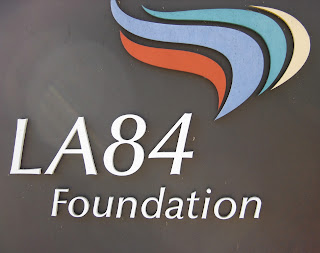 Tim and I aren’t architects nor are we architectural scholars.  We are, however, members of the Southern California chapter of the Society of Architectural Historians (SAH-SCC), which celebrates the fabulous architecture of L.A. and its surrounding environs.   Unlike, say, the L.A. Conservancy, SAH-SCC is not an advocacy group.  But its tours and other educational events do a terrific job of bringing together two of our favorite things: architecture and the history of Los Angeles.

Yesterday the Society sponsored a lecture on the continuing impact of the 1932 and 1984 Olympics, both of which, of course, were held here in Los Angeles. The program was presented at LA84, a local foundation created with profits from the 1984 games.  The speaker was Wayne Wilson, an Olympics expert and director of the LA84 sports library.

Regretfully, Tim and I didn't go to the 1984 Olympics—we were both living in San Diego at the time—but we avidly watched the games and collected and read everything we could about the various events.  So even though we weren’t there, we do know a lot about the 1984 games.

The 1932 games, on the other hand, are a relatively recent fascination, especially since the Olympic Village—the first housing ever built for the athletes—was located in the Baldwin Hills, not far from our home.  The male athletes had rooms in the Village, while the women stayed at the Chapman Park Hotel near downtown L.A.  The 1932 Olympics also marked the first time the staggered dais was used to honor the medal winners—a tradition that lives on till today. 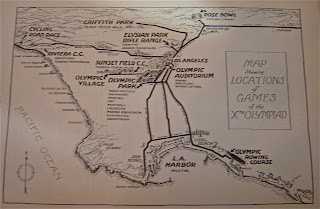 Although very few new venues were built for either the 1932 or 1984 games, daily reminders of the Olympics still very much remain.  Tenth Street, for instance, was renamed Olympic Blvd. in honor of the tenth Olympiad held in 1932.   Then, in 1984, all the streets downtown were changed from two- to one-way to help facilitate traffic to and from the games.  Most interesting, though, was learning that approximately 20,000 palm trees were planted in Los Angeles in the late 1920s/early 1930s to make the city more attractive to Olympic games visitors.  Like Olympic Blvd. and downtown's one-way streets, the palm trees are here to stay.

Because the Great Depression was in full force by 1932, city leaders feared that few people would trek to Los Angeles for the summer games.  So a media blitz was launched nationwide, emphasizing the more romantic aspects of L.A.’s history.  One brochure even claimed that a group of Franciscan monks had, in their early travels, blessed the area as “Holywood”—an inspiring explanation for how Hollywood got its name, but complete fiction!  Hollywood royalty, like Douglas Fairbanks and Mary Pickford, did do a lot to promote the Olympics, however, entertaining the athletes in their home and participating in public events. 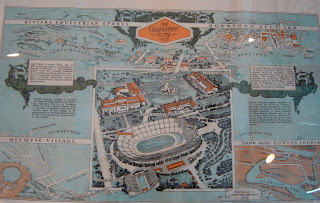 Another map of the 1932 vanues

Finally, as a librarian, I would be remiss if I didn’t at least mention LA84’s phenomenal sports library.  Containing some 40,000 sports-related items, the library is open weekdays and by appointment.  Their digital archive of over 100,000 PDF files is also available online for free.  Happy reading! 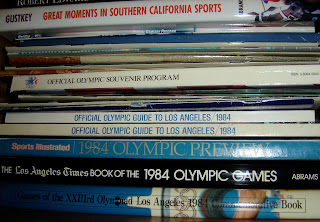 From our own library at home