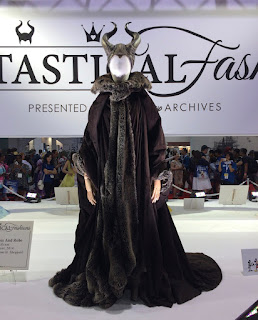 Costume from the movie Maleficent—Disney archives exhibit
D23, the Disney fanclub, has held its big three-day convention in Anaheim every two years since 2009.  What began as a low-key, rather amateur event eight years ago has evolved into a mega-media extravaganza comparable to a mini-Comic-Con and not in a good way. Attendees have to wait on line for hours to see their favorite Disney celebrities and/or shop in one of several exclusive pop-up Expo stores. One young man told me he waited three hours to get into the on-site Disney Store to buy a special "convention-only" set of Mary Poppins tsums-tsums for a friend. He kept his fingers crossed the entire time, hoping they wouldn't sell-out by the time he finally got inside. (Luckily, they didn't.) I commended him on being a truly good friend. 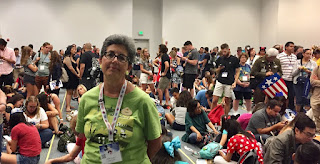 Waiting, in what I call "the holding pen," to see Pixar animators

The fifth D23 Expo was this weekend. Tim and I have attended every one and, though, I often threaten to never return, I always do because, despite the lines and the crowds, it always ends up being a memorably fun time. We even got a hotel room, this time around, making traveling back-and-forth to Orange County a lot less stressful. 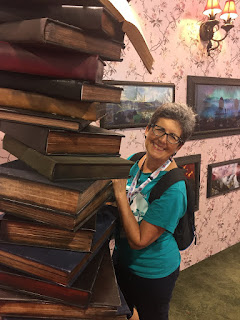 Photo op with pile of books
The first major event on Friday was the induction of this year's Disney "Legends"—a prestigious hall of fame for celebrities and other talented Disney employees who have made major work contributions to the company. This year's group included several animators, as well as Oprah Winfrey, Whoopi Goldberg, Garry Marshall, Julie Taymor, Mark Hamill, and Carrie Fisher. The Legends ceremony is always a highlight for me, so we arrived especially early to wait on line. It took two hours to get in; but even Tim had to admit the event was wonderful once we were inside, celebrating each person's accomplishments. 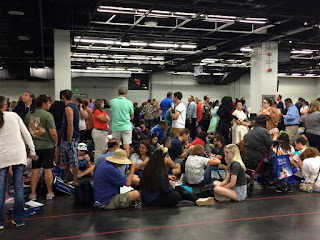 Waiting for the Legends ceremony. Can you find Tim?

The other highlight was seeing the huge 3-dimensional model of the new Star Wars Land, called Galaxy's Edge, currently under construction at Disneyland. Though I resent how much the recently-acquired Stars Wars franchise now overshadows the more traditional Disney universe, even I'm excited to see the park's expansion into a world far, far away. It's scheduled to open in time for the next D23 Expo in 2019.

Panorama of the new Galaxy's Edge, the largest land ever
to be added to any Disney property 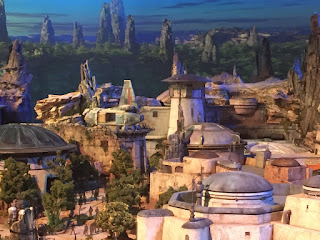 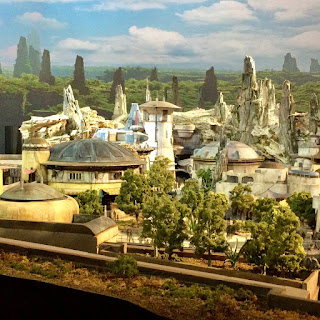 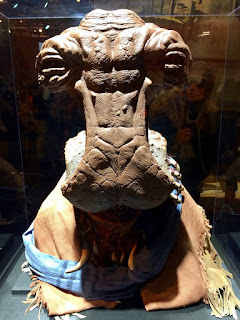 One of the "other-worldly" characters to
populate the new land 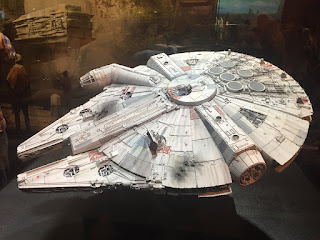 Visitors will be able to fly the Millennium Falcon
Besides events, exhibits, and things to buy, the Expo lets fans release their inner Disney personas through costumes and other creative means not usually allowed in the parks.  Lots of adult princesses and villains, of course, But the most amazing was a young woman dressed as Disneyland's Big Thunder Mountain ride, complete with a running model train! 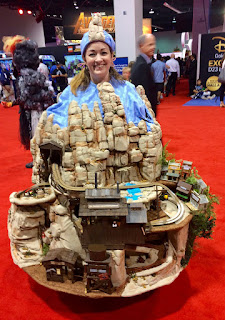 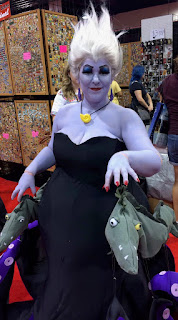 A fan dressed as the villain Ursula
from Little Mermaid
When we're lucky, we even see real-life heroes wandering around the convention hall. I was gazing lovingly at my new Groot coin-purse, when I heard Tim say, "Babe, there goes SHAG!"

Sure enough, our all-time fave artist, SHAG (i.e., Josh Agle), was walking through the exhibits, unnoticed, with his children. We followed behind, until someone stopped him for a photo. We then we leaped in. SHAG was extremely gracious while I gushed about loving his work, etc. I then asked if that was him depicted in his 50th-anniversary painting of Disneyland's Frontierland and he said, "yes," pointing to his daughter, adding that she's in the picture, too. I was beyond thrilled and completely forgot how grumpy I was, just a few hours before, about not being able to see a panel discussion on upcoming live-action Disney movies because the line was too long! Hands down, meeting SHAG was the best part of this—or any—year's Expo. 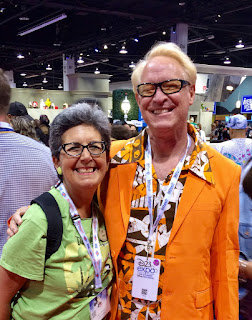 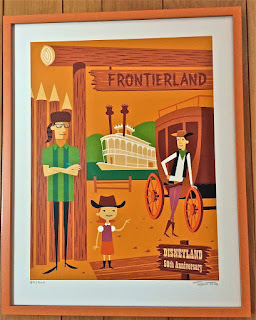 The Frontierland 50th-anniversary print that hangs above our bed
Since we were spending the night anyway, we decided to go to the Angels baseball game just a mile from our hotel. Our seats were good, but the team not so much. Still, we did get to take a photo with staff characters from Disney California Adventure's Guardians of the Galaxy show, one of the sponsors of that night's game. 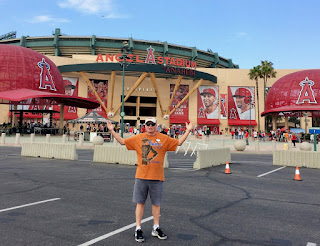 In front of the stadium 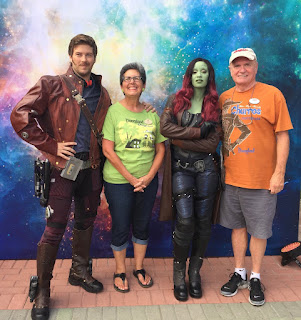 With Peter Quill and Gamora
The perfect ending to this year's D23 Expo experience. Back to reality tomorrow . . .
Posted by Cyn at 4:51 PM No comments: