I woke up at 3AM, even though my alarm clock was set to go off an hour later. It was so early the cats didn’t even join me, so I quietly read while waiting for “Good Morning America’s” (GMA) inaugural coverage to start at 4AM.

The night Obama won the election, I promised myself I would go to Washington D.C. to attend the inauguration. But life intervened and so there I was, sitting at home, waiting for the festivities to begin.

People were already packed into the National Mall by the time GMA began. I scoured the crowds for friends I knew were there. It was cold, but looked to be a clear day. I decided that as thrilling as it would have been to actually be there, it was best to watch from my comfy couch.

Hungry, I went into the kitchen to rustle-up some breakfast. I had hoped to wake Tim to the smell of baking banana bread, but he heard the beep of the oven’s timer and quickly stumbled out of bed to see what was cooking.

“I’m baking a bread to eat while I watch the inauguration,” I answered matter-of-factly.

We started hearing reports that people were already congregating at L.A. Live, where Tim now works, to watch the ceremony on big-screen TVs. Worried that all the good parking spaces would be gone, Tim took off as soon as the bread got out of the oven. 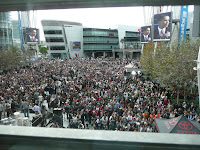 Though I enjoyed the TV interviews with the Obamas’ friends, etc., I was getting antsy to see the First Family. What was Michelle (my new favorite “Most Beautiful Woman in the World!”) going to wear? How cute were Malia and Sasha going to look? (They were, of course, darling!).

Tim called to say that hundreds of people were jammed into the L.A. Live plaza. He could see the proceedings from his office window.

The cameras finally switched over to Blair House, where Obama family members were piling into cars to head over to a nearby church. The First Couple emerged—I loved Michelle’s lemongrass-colored ensemble!—and the race was on. After church they went to the White House to “have coffee” with the Bushes. Lots of photo ops. But the TV commentators were most abuzz over the precedent-setting gift Michelle gave to Laura: a journal and pen set so she could begin writing her memoirs.

After a short while, the vice presidential contingent exited the White House—the wives and then the husbands—and then the First Ladies appeared. The president and the president-elect were the last to enter their limousine. While the procession made its way to the Capitol, Tom Brokaw and Brian Williams speculated about what Mr. Bush and Mr. Obama were talking about, interjecting horror stories about previous presidential rivals who rode in silence because they hated each other. Everyone agreed that Bush and Obama were probably chatting quite amicably. 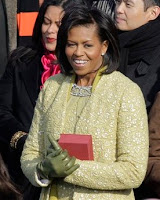 Meanwhile, the podium where the swearing-in ceremony was about to take place was starting to fill-up with Congressmembers and other dignitaries. Michelle arrived carrying Lincoln’s bible. Former vice presidents and their wives were introduced and took their seats, followed by former presidents and their wives. Everyone screamed and applauded for the Clintons, who looked as confident as ever.

George W. Bush then made his entrance to lukewarm applause. Apparently people on the Mall were waving and singing “Na-na-na, Na-na-na, Hey, Hey, Good-bye!” to the out-going president, but the TV microphones didn’t pick it up.

Then it was Barack Obama’s turn as he walked the long hallway to the outdoor stage. He could see the almost two million people crowded onto the National Mall and must have realized what was about to happen, because just for a moment the man, whom everyone calls Mr. Cool, seemed filled with emotion. I could only imagine what was going through his mind.

The crowd went wild as cameras showed people of all ages and colors sobbing and waving. California senator Dianne Feinstein guided the proceedings. Aretha Franklin sang “America the Beautiful” and Itzhak Perlman and Yo-Yo Ma played a sobering but lovely piece arranged by John Williams. Then it was time for the swearing in. Chief justice Roberts and Obama both flubbed their lines—a bad omen, I thought, until Barack launched into his speech and took total command of the situation. He admonished the country to take responsibility for its actions and promised that we would once again become a world leader. If I were George Bush, I would have been ashamed to be so poignantly reminded of my failure.

When it was all over, I started my work day and forgot about watching the inaugural parade like I was going to do. By dinnertime, I was exhausted. I did stay awake long enough to watch the televised “Neighborhood Ball,” however, and cried when Barack and Michelle, looking like happy newlyweds, danced to Beyoncé’s version of “At Last.” 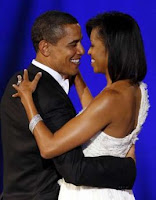 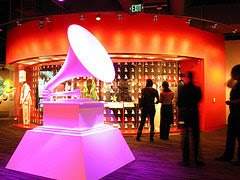 The Grammy Museum opened last month as part of L.A. Live, a downtown plaza that hopes to emulate the excitement of NYC’s Times Square. The jury is still out on just how exciting L.A. Live will eventually be, but for now it’s shiny and new and gives people another reason to go downtown after dark.

Hoping that the Grammy Museum would be our own Rock ‘n Roll Hall of Fame (Cleveland) or Experience Music Project (Seattle), I was disappointed by its size: a mere four (rather small) floors displaying photos and audio exhibits of past Grammy award winners. The museum does house a nicely intimate (250 seats) theater, however, where Grammy officials hope to host public programs and unique musical events. For this reason alone, Tim and I became charter members.

As I’ve written elsewhere in this blog, the Beach Boys have loomed large in Tim’s and my lives. Not only did they sing about the surf culture we both loved as kids, but they were local boys, growing up in Hawthorne, not too far from where we now live. One of my sister’s and my theme songs was “All Summer Long.” And who doesn’t love “Good Vibrations”?

Fame, of course, doesn’t suit everyone and so Brian Wilson, the mastermind behind the Beach Boys, famously dropped out of the public eye in the late 1960s, frying his brain on drugs and playing piano in a sandbox that he built in his bedroom. As he says in his most recent, extremely autobiographical album, “That Lucky Old Sun,” “At 25 I turned out the light/ ‘Cause I couldn’t handle the glare in my tired eyes.”

But happily for us, Brian is now back, winning a Grammy in 2004 and a Kennedy Center award in 2007. Yes, he may look like something of a zombie (in an Hawaiian shirt!); still his contribution to California culture cannot be overstated. No wonder, then, that the first big event at the Grammy Museum theater was an interview with Brian Wilson.

The event sold-out immediately, so I had Tim work his connections magic. On Thursday morning, less than 10 hours from when Brian was being interviewed, Tim called to say he had tickets in hand. We were in! As suspected, the audience was filled with mostly “industry” folk, including Harry Shearer, who we later saw rocking out to “California Girls.”

Brian marched up the stairs to the small stage, looking like some guy who had just wandered in from the street. The conversation was obviously well-rehearsed, with the interviewer occasionally feeding Brian the answers. I was enthralled nonetheless. Did you know, for instance, that “Pet Sounds,” possibly the most brilliant Beach Boys album ever produced, was named in honor of Brian’s mentor Phil Spector (P.S. = Pet Sounds/Phil Spector)? Or that “God Only Knows,” one of the most beautiful pop songs of our generation, was written in just 45 minutes by Brian and Tony Asher, an ad guy who wanted to break into the music business? Besides Spector, Wilson said he was most influenced by the Four Freshmen, the Everly Brothers, and the Beatles. In fact, in the most touching moment of the night, he related how nervous he was singing with Paul McCartney at a recent function. “I tried not to be nervous,” he admitted, “but I was.”

After about 35 minutes, Brian’s current bandmates joined him on-stage to sing songs from past and present. We’ve, of course, heard him sing live many times before, but never from only 10 feet away. His voice is definitely shot, but it didn’t matter. I was a teenager once again and Brian Wilson was singing just for me . . . 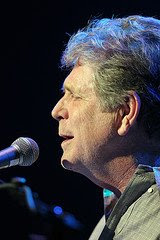