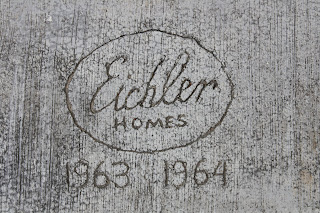 In the early 1960s, real estate developer Joseph Eichler commissioned the local firm of famed architect A. Quincy Jones to design a tract of homes on the north end of the San Fernando Valley. The homes, located off of Balboa and Woodley, are distinctly modern, with low-sloping A-framed roofs, clean vertical lines and unadorned facades. Embracing the mid-century “indoor-outdoor” philosophy of design, each home is situated around a small open atrium that greets the visitor at the front door. Other features include concrete floors, post-and-beam ceilings and burlap-covered closet doors that conspire to give the houses an extremely natural—as opposed to human-made—feeling. We, of course, love Eichler homes and so were thrilled to be able to tour six excellent examples yesterday with the Friends of the Gamble House, a preservationist group that sponsors various architectural tours. Indoor photography was mostly restricted (don't want the world to know what's behind those deceivingly simple exteriors), so here’s a taste of what we saw (click on the images to enlarge): 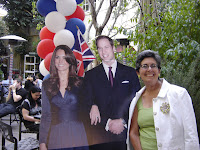 The weekend began, of course, with the royal wedding, Friday morning. I debated waking up at 1AM to see it live, but tivo’d it instead so I could watch while getting ready for work. The whole hat obsession was a bit odd, but the wedding itself was wonderful. Kate Middleton and her dress were gorgeous and I cried when William and Harry—both looking so handsome in their military regalia—arrived at the church. If only Diana were alive to see it. What a glorious day!

In the late afternoon, Tim and I joined a handful of my students who had arranged a tour of the CNN studios in Hollywood. We’ve toured other TV studios before, so nothing new, but we did see Dr. Drew, CNN’s latest on-air personality, getting off an elevator, and chatted briefly with fashion commentator Nick Verreos on his way to shoot a critique of the wedding guests’ attire. 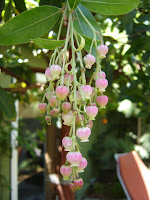 On Saturday, Karen and I spent a couple of hours visiting homes on the Mar Vista Green Garden Showcase tour. Now in its third year, the tour featured more than 70 properties located in a diverse section of L.A. that stretches from Culver City to Venice Beach. 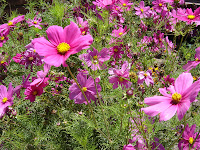 This has become a premier event for local gardeners and, most amazingly, is free. Highly recommended.

That night Tim and I joined my students once again for the dept’s annual Dodgers outing. The seats were in nosebleed territory, as usual, but the view of the city was phenomenal. After a long day in the sun, I was exhausted, so we left the game early, stopping in upscale Larchmont, on the way home, for an ice cream nightcap. Baciami gelato: creamy, rich and expensive, but oh so tasty—yum!

Back to it on Sunday, Tim accompanied me on yet another house and garden tour—this time in Santa Monica. The homes were fabulous and the weather perfect. We took the Miata and rode with the top down all day. After three hours of touring, we headed toward the Brentwood Country Mart for some Reddi Chick rotisserie-baked chicken, our new favorite “fast food” on the upper westside. Built in 1948 and looking like something right out of the midwest, the barn-clad Mart is located on the corner of busy San Vicente Blvd. and 26th St. in the heart of ritzy Brentwood. The shops may be too high-end for our thin wallets, but the food is outrageous—definitely worth the 20-minute (on a good day!) drive.
Posted by Cyn at 8:21 AM No comments: