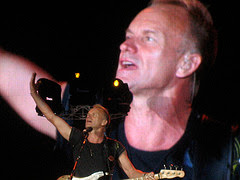 I’ve had a secret love affair with rock/pop legend Sting since 1983, when he and his former band, The Police, recorded their last studio album together. Sting, of course, has no idea who I am. Plus I’d have to fight half the women in the world—including his wife Trudie—for his affections. Nevertheless, I unabashedly adore him.

Over the years, I’ve seen him perform countless times as a solo act. But the most memorable concert still is the first time I saw him play with The Police 24 years ago. I was living in San Diego at the time, so Karen came down to accompany me to Aztec Stadium. We argued over who was going to use the binoculars first when Sting came out in a flesh-colored outfit that made him look decidedly naked. We’ve both been fans ever since.

Rumors had been flying around that The Police, who had become estranged after disbanding in the mid-1980s, were going to reunite. Sure enough, a few months ago they held a press conference to announce a world tour this summer. I immediately called Tim and asked him to get tickets through his radio contacts. They cost a small fortune, but he did good: four seats on the field at Dodger Stadium, 20 rows from the stage.

After what seemed like years, concert day (Saturday) finally arrived. I kept busy by cleaning the house and watching DVDs of The Police and Sting. I even unearthed a vintage t-shirt from Sting’s first solo concert 20 years ago, but was distressed to discover (surprise, surprise!) it no longer fit. A few snips of the scissors later—vintage, schmintage!—and I was ready to go.

Karen and our friend Estelle showed up at the house at 5PM. We debated the best route to take, knowing that traffic would be a nightmare as 55,000 concertgoers headed toward Dodger Stadium. Tim argued for the freeway, but I decided to take surface streets. An hour-and-a-half — and fifteen miles — later we pulled into the stadium. On impulse, we bought “preferred parking” ($35!), in the hopes we could easily slip down the hill after the show. Ha! I don’t know how long it took non-preferred folks to get out of there, but we were stuck in our car for an hour before moving even one inch. 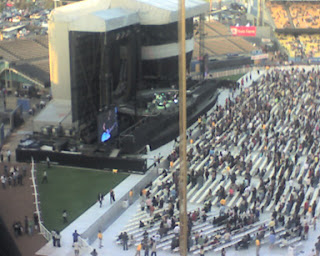 The massive four-story stage was set-up in center field. A six-inch-thick plastic floor covered the grass and baseball diamond. My breath was quite literally taken away as we entered through the team bullpen and suddenly saw the inside of the stadium. 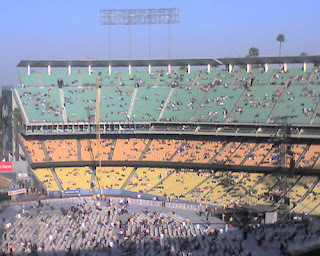 So this is what it’s like to be a major league baseball player. Several women stood nearby rolling their eyes as their boyfriends slammed against the outfield wall, pretending to catch a fly ball.

Our seats (white folding chairs) were to the right of the stage, directly in front of an enormous set of speakers. The sound was so powerful I swear my hair moved with every beat. A band called FictionPlane was on stage. 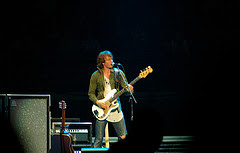 I had a vague memory that Sting’s son Joe Sumner was in the opening act, so we all jostled for the binoculars to see if he looked anything like his father. If more people knew Sting’s progeny was on stage, they probably would have been more respectful. As it was, everyone seemed more interested in buying beer and souvenirs than in listening to the band.

We sent Tim to scope out food options and restrooms. He excitedly reported back that he’d found a drinking fountain in the Dodger bullpen and then quickly volunteered to fill-up my empty water bottle. Who cares about concerts when there are baseball landmarks to explore?

Tim called his friend Nick to see if he’d gotten into the stadium yet. Nick said they were stuck on the 110 freeway and were not moving. The second opening act, the Foo Fighters, had emerged and were starting to play. I’ve been to many rock concerts in my life, but this was almost unbearably loud. I sat with my hands covering my ears while people, much younger than me, danced and cheered their way through the set. An hour later, a guy selling earplugs walked by, but it was too late—my hearing was already destroyed. 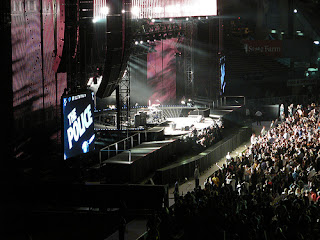 At 9:10PM, The Police finally took the stage with a rousing rendition of “Message in a Bottle,” one of my favorite songs. We stayed on our feet for the next two hours. Nick text-messaged Tim at 9:15PM to say they had just entered the stadium. Thank goodness we took surface streets instead of the freeway or we, too, would have missed the opening song. 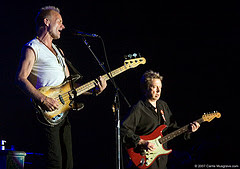 Needless to say, the show was amazing and Sting looked fabulous! My only quibble was “Invisible Sun,” which was played against a backdrop of Iraq war footage. Although I appreciated the sentiment, the images really killed the mood as the concert nearly came to a screeching halt. But the crowd’s energy was soon buoyed again by more upbeat tunes. At one point, Sting turned the singing over to the audience as we all screamed out the lyrics to “Roxanne,” their first big hit. Surely people could hear our off-key voices for miles. 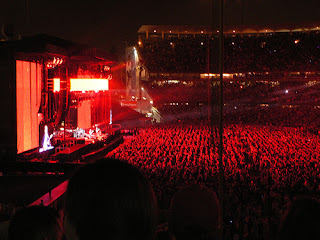 Three encores later, we were heading back to the car, despite the fact that I could barely move from all my jumping and dancing in place. I don’t know how Sting, who is two years older than me, keeps up the pace. Must be all that tantra yoga he’s famous for (by the way, did I mention how fabulous he looked?!)

Karen and I went antiquing late the next morning and, of course, deconstructed every minute of the concert. My ears had stopped ringing, but every muscle was sore. Could it be that I’m getting too old for rock ‘n roll? Nah . . . . As long as Sting and Paul McCartney and Neil Young and others continue to rock, so will I! 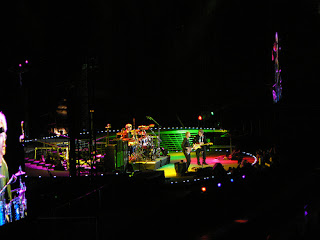 I hadn’t been to Disneyland in a while, so I convinced Tim to go with me yesterday after spending the day with family in Orange County. The plan was to just go shopping at Downtown Disney (DD), the street mall outside Disneyland; but when we saw no lines to get on the Monorail, which stops in DD, we decided to take a quick roundtrip above the park. I was especially curious to see how the old submarine ride had been converted into “Finding Nemo,” a new ride which opens tomorrow.

From the Monorail we could see the submarines, now painted bright yellow, moving through the old lagoon. They looked beautiful, so shiny and new. But wait a minute—what was this? People were actually getting onboard!

“Babe, it looks like Nemo is having a soft opening!” I whispered to Tim. “Let’s see if we can get on.”

Luckily the Monorail stops right above the submarines, so we raced downstairs. Sure enough, there we found a short line of people standing behind a sign that said, “PREVIEW by Special Invitation Only.” I just had to get on that ride!

“Hi!,” I cheerfully said to the guy taking tickets. “My husband works for Disney. Is there any way we can get on the ride?”

He pondered the question for a couple of seconds and then said, “How many of you are there?”

He looked around to see if anyone was watching and then waved us in. “I LOVE YOU!” I yelled as we zipped by. We were on our way to find Nemo!

The submarines were always one of my favorite rides when I was a kid. Yeah, they were hokey with their foam-rubber mermaids and moldering fake fish, but to my young eyes it all was very exotic. I was deeply saddened when Disney decommissioned the subs almost ten years ago.

All my old feelings for the ride came flooding back as we and a group of middle school boys stepped down inside one of the newly refurbished boats. “How lucky are we to be on this ride?!” one of the boys excitedly exclaimed. I knew exactly what he meant. 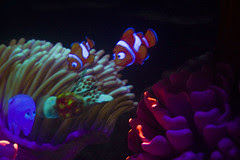 After a few minutes, the lights were dimmed and the boat started to “submerge.” From our portholes we could see colorful coral and starfish swaying in the water, followed by the ruins of an ancient civilization, which I think were left over from the old ride. Our automated tour guide (from Australia) next told us to listen carefully, because in these waters we could actually hear fish talking.

He was right, of course, and soon we were treated to familiar scenes from "Finding Nemo” somehow projected onto spaces between and under the rocks we were floating by. The effect really brought the movie to life and was lots of fun. The middle schoolers, who had been chattering incessantly before we launched, were absolutely silent, so I could only guess that they—like me—were completely mesmerized.

All too soon, the fish were waving us good-bye as we started to surface. Our pilot let Tim take a peak at the controls while I went topside. I felt like a kid all over again!

Disneyland may be the happiest place on earth, but it’s even more magical when you’re lucky enough to be one of the first people to experience a new ride. . .