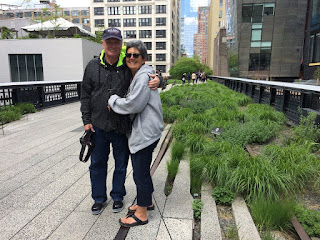 Walking the High Line through Chelsea
We love New York City, but hadn't visited since 2009 and so jumped at the chance to go on a Broadway tour with the South Coast Rep, a theater group in Orange County. The tour provided tickets to four Tony-nominated plays—War Paint, about the rivalry between cosmetics mavens Helena Rubinstein and Elizabeth Arden, Oslo, about the short-lived Palestinian peace accords negotiated in the early 1990s in Norway, Noel Coward's Present Laughter, and Hello, Dolly! starring Bette Midler—plus we saw A Doll's House, Pt. 2 on our own. We also visited the Rockefeller family estate Kykuit, the 9/11 memorial and museum, mid-town Manhattan, and the NY Transit Museum—all of which you can read about in separate posts below.

We rode the subway, saw friends, ate lots of good food, and walked our feet off. It was a wonderful, and much needed, vacation! 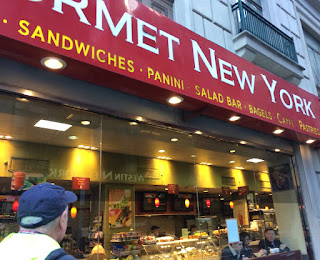 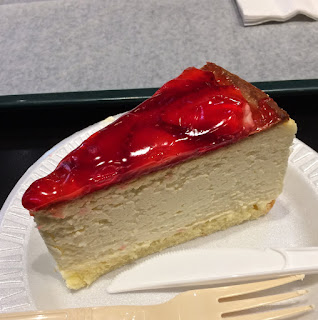 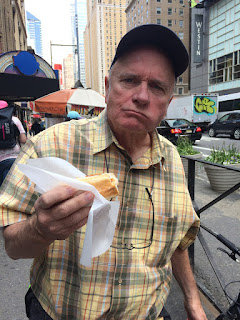 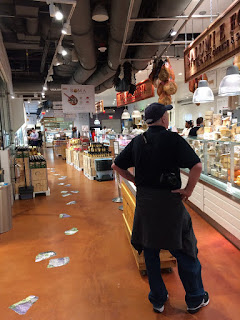 Trying to decide what to eat at Eataly 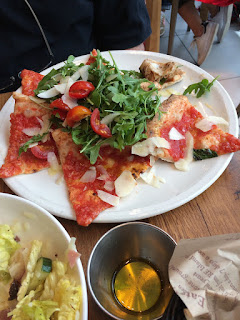 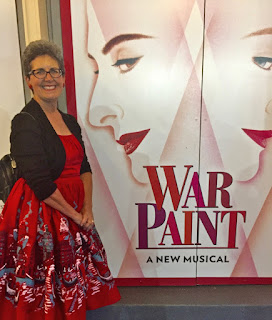 And, of course, dressing up for the theater
Posted by Cyn at 9:03 PM No comments: 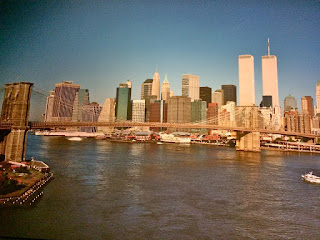 Photo of Lower Manhattan, taken moments before the first plane
crashed into WTC on 9/11
The most moving—and difficult—part of our stay in NYC was visiting the World Trade Center and 9/11 Museum. Tim and I had seen the Twin Towers on previous trips to New York and had witnessed, firsthand, the cleanup efforts soon after the destruction of 9/11. So we were familiar with the area. I was not prepared, however, for the emotional impact of a revitalized "ground zero."

Though never a big fan of the architectural style of the Twin Towers, they, of course, have since transcended any criticism of how they once looked. The new One World Trade Center is much taller and shinier than the original, but it will never loom as large, in my mind and heart, as the towers. Instead, my eyes looked downward to the two reflecting pools marking the footprints of the demolished Center buildings. The pools were somber but beautiful and rimmed with the names of the people who died on 9/11. A simple but powerful tribute. 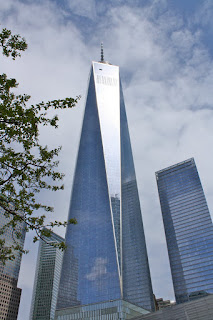 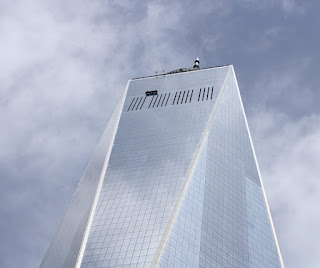 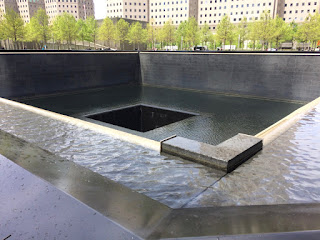 Reflecting Absence reflecting pool, memorializing the former
footprint of one of the Twin Towers 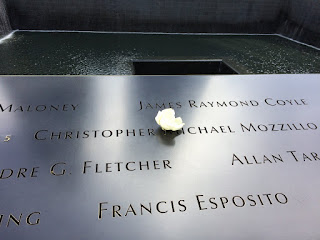 Flowers are placed on the victims' names on their birthdate 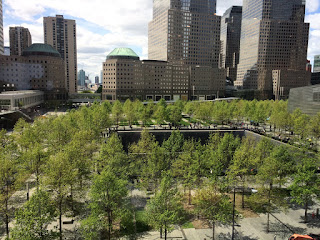 Looking at the south pool from above
There are two museums commemorating the events of 9/11: one created by the victims' families and one located in the underground bowels of the former towers. We visited the latter, which was enough for me. I was not the only person openly crying as we passed the few surviving remnants of the buildings. In an interior room—signs warning parents of graphic images—were artifacts and television footage of the destruction. I lasted five minutes before telling Tim I'd meet him outside after he was done. Far too emotionally painful to experience all over again. 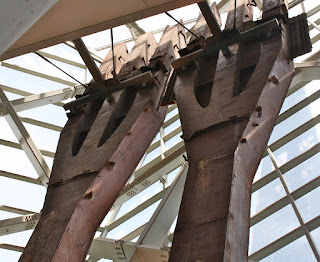 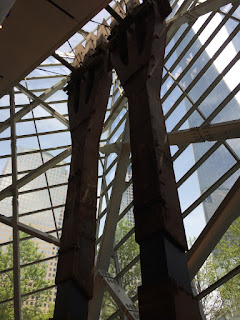 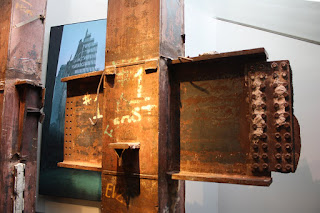 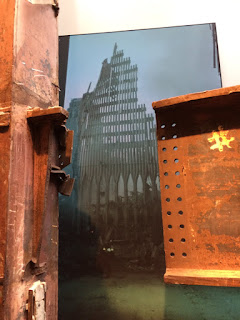 Photo of the remaining tridents (click on image
to enlarge) 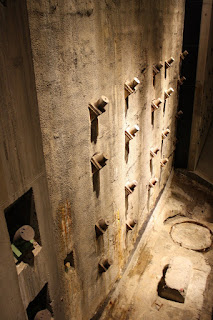 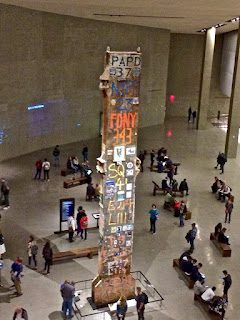 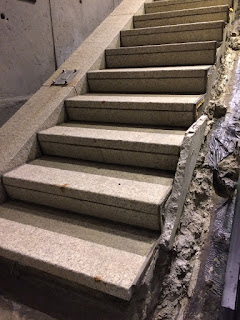 "Survivors' Staircase," which over 200 people used to
escape the collapsing building 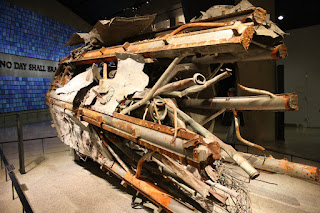 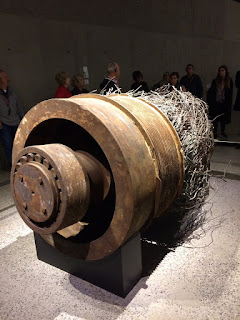 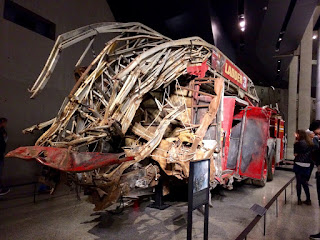 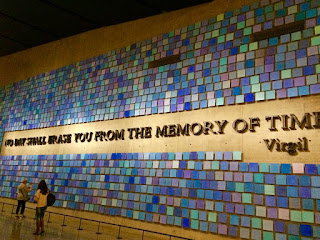 "No Day Shall Erase You From the Memory of Time"—the
blue tiles try to capture the color of the 9/11 morning sky
After emerging from the museum, we made our way over to the Oculus, an incredibly spectacular structure that houses an indoor mall. To me it looks like an eagle crossed with Statue of Liberty's crown. It also reminded me of the few tridents that remained standing after the towers fell. In the end, I decided the Oculus was a cathedral to commerce—a grand F.U. to all terrorists who think they can destroy the American way of life. What do you see when you look at it? 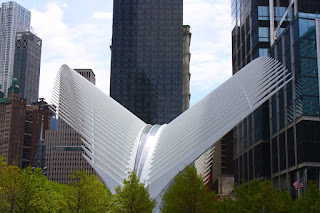 The Oculus: an eagle in flight? 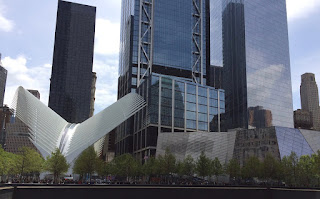 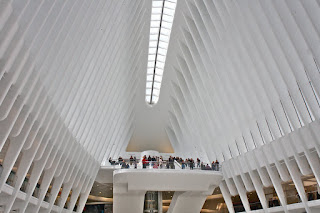 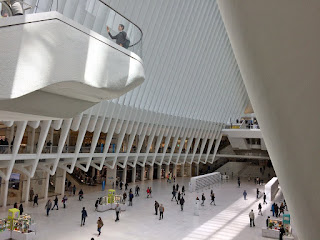 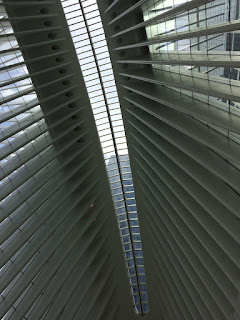 Looking upward at the spine of the Oculus 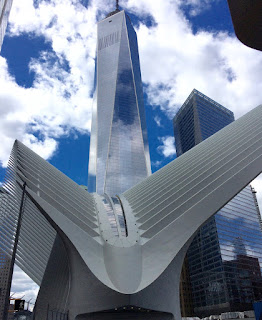 Backside of the Oculus, with One World Trade Center behind
Posted by Cyn at 9:02 PM No comments: