One of the first things we did when we moved back to Los Angeles, 14 years ago, was join the L.A. Conservancy. We’ve been members ever since. We support the Conservancy because it fights against the needless demolition of the city’s most important historical landmarks (including the downtown central library!), plus it offers regular architectural tours that are fun and affordable.

One of the Conservancy’s most popular fund-raising events is the annual “Last Remaining Seats” series, where several classic movies are shown in downtown L.A.’s famous but mostly shuttered old movie palaces. Depending on what’s playing, we usually like to attend at least one of the screenings so we can relive the moviegoing experience of yore. In the past, we’ve seen the likes of “Singing in the Rain,” “Some Like It Hot,” “Pal Joey,” and “Gentleman Prefer Blondes.” This year our eye was caught by “Young Frankenstein,” Mel Brooks’s hilarious spoof of old black-and-white horror films.

Although the theaters, located along the Broadway corridor, are no longer operating, they nonetheless remain magnificent relics of Hollywood’s glory days. Many people buy “Last Remaining Seats” tickets just so they can explore the musty but lavish interiors of these fabulous old movie-houses. The Los Angeles Theater (opened in 1931) is the most beautiful of them all, though I prefer the less opulent Million Dollar Theater, where my mom used to watch Spanish-language films when she first moved to L.A. in the 1950s. 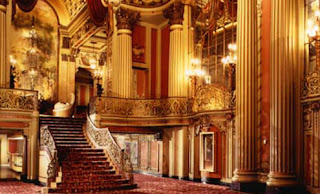 Luckily we bought our tickets early, because “Young Frankenstein” was sold-out when we arrived on Wednesday. While newcomers stood in the lobby oohing-and-ahhing over the architecture, we ran and got seats at the back of the theater on the first floor. It was warm (air-conditioning apparently wasn’t invented until after 1931!), but at least we had a good view of the screen and three chairs sitting prominently, if empty, on the stage. A guest host usually introduces each film before it plays—often someone like movie critic Leonard Maltin or one of the film’s stars (Tony Curtis, for instance, shared behind-the-scenes stories about Marilyn Monroe when we saw “Some Like It Hot”)—but the only person listed in the program this time was local historian Harry Medved. We wondered who was going to occupy the other two chairs.

Finally, the lights dimmed and a voice introduced not only Medved, but also Cloris Leachman, who played Frau Blücher (cue the neighing horses!) in the film. The applause was so loud that the third person strolling on stage was never introduced. Never mind. Tim knew instantly who it was.

“IT’S MEL!” he yelled, leaping to his feet and clapping. And indeed it was. Cloris Leachman AND Mel Brooks together again on the same stage. The audience screamed its approval.

Brooks immediately began recounting how he was able to get the movie made even though it was in black-and-white. He and Leachman then told the story of how they first met (on the set of the old Andy Williams Show) and how the movie was cast. They reminisced about funnyman Harvey Korman, who recently died, and went off on several tangents. Poor Harry Medved couldn’t get a word in edgewise, but we didn’t care because all we wanted to do was listen to Mel and Cloris. At one point Leachman, who is in her 80s and looks amazing, strutted around the stage imitating Raquel Welch, who had handed Cloris her best-supporting-actress Oscar in 1972 for “The Last Picture Show.”

After about 30 minutes, someone came from off-stage to give Medved a piece of paper, obviously asking him to wrap things up. He signaled to Mel that it was time to go by pointing at his watch. Mel and Cloris continued a little while longer, but eventually left amid cheers and raucous applause. We then settled down to watch the movie. Like the Los Angeles Theater, it still held up well after all these years.
Posted by Cyn at 2:51 PM No comments: 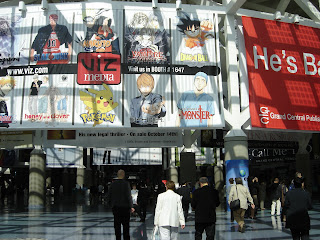 For those of us who love books, the annual BookExpo America (BEA) show is heaven on earth. Not only does every major—and many a minor—publisher exhibit at BEA, but most of the books they display are free for the taking.

Although BookExpo usually happens in cities east of Chicago, the show does occasionally come to the west coast. I marked my calendar immediately (six months ago) when I heard it was coming to the L.A. convention center, May 29-June 1. I then bought passes for both Tim and me.

We arrived, each carrying a large canvas bag, just as the doors opened at 9AM on Saturday. A small swing band and dancers greeted us as we walked in. Only momentarily distracted, we quickly proceeded up the escalator alongside hundreds of other book-lovers.

The biggest book show in North America, BEA is so enormous that it fills both buildings of L.A.’s gigantic convention center. Each hall was ablaze with larger-than-life ads and posters of titles to be released later this year. On the floor of most of the booths were artfully-arranged stacks of free galleys (i.e., preprint copies of books). Overwhelmed by possibility, we decided to start at the left end of the hall and walked up and down each row until we’d visited every exhibit in the place. My first acquisition: “Fences, Arbors, and Trellises: Plan, Design, Build,” a DIY book from Creative Homeowners. Tim grabbed “Mexican American Mojo: Popular Music, Dance, and Urban Culture in Los Angeles, 1935-1968.”

My eyes were so focused downward, in search of new books, that I almost ran into a dazed-looking woman who had never been to BEA before.

“Are all these books free?” she asked incredulously.

By lunchtime, Tim and I were so loaded down with bootie that we had to run out to the car to empty our bags.

Besides free books, BEA also features authors, book-signings, and “educational programs” (i.e., panel discussions on various topics). Former L.A. Times writer Rick Wartzman, whom I had met a couple years ago when he was doing research for his latest book, “Obscene in the Extreme: The Burning and Banning of John Steinbeck’s ‘The Grapes of Wrath,’” was speaking about censorship at 11AM, so we tore ourselves away from the exhibit hall and headed upstairs. Several library friends and colleagues were already there.

Rick talked about his book, which is due to be released this fall, and ended with a quote by Gretchen Knief, the librarian I had helped him research. I was absolutely thrilled. As soon as the program ended, I shot out of my seat to speak to him.

I was just about to reintroduce myself, when Rick spoke first, saying he had recognized me in the audience. He then added that I was cited in his book! Tim and I immediately ran downstairs to snag a preview copy and look for my name!

As wonderful as it was to have Rick Wartzman remember me, it was even more exciting when I discovered that Leonard Nimoy, my favorite classic “Star Trek” character Mr. Spock, was signing his latest book at 1PM. Tim and I zipped over to booth #2110, fifteen minutes early. Nimoy was already hard at work signing and schmoozing with his fans. I rushed to get on line, but the queue of people snaked halfway through the hall. We decided to just snap a photo instead. 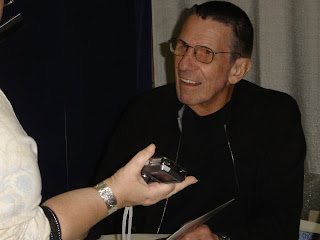 Exhausted, with not an ounce of adrenaline left in our bodies, we hobbled to the secret “librarians-only lounge,” organized by “Library Journal,” the oldest and most popular publication in the profession. There we noshed on pastries, chatted with colleagues and generally relaxed until it was time to enter the fray once again. Turns out my other favorite classic Trek hero, William Shatner, was signing his latest book at 3PM.

We dashed over to the St. Martin’s Press booth at 2:30PM. But the line was already twice as long as Nimoy’s had been, so we looked at a few more exhibits and then headed home. The back of our small Honda was overflowing with loot: historical novels; a guide to dating vampires; uncensored scripts of one of our fave TV shows, “Rescue Me;” a weeper about Dewey the library cat; Philip Roth’s latest book; and several travel guides to Los Angeles. Who says books are an endangered species? 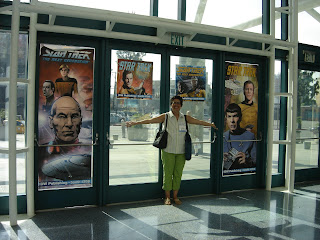