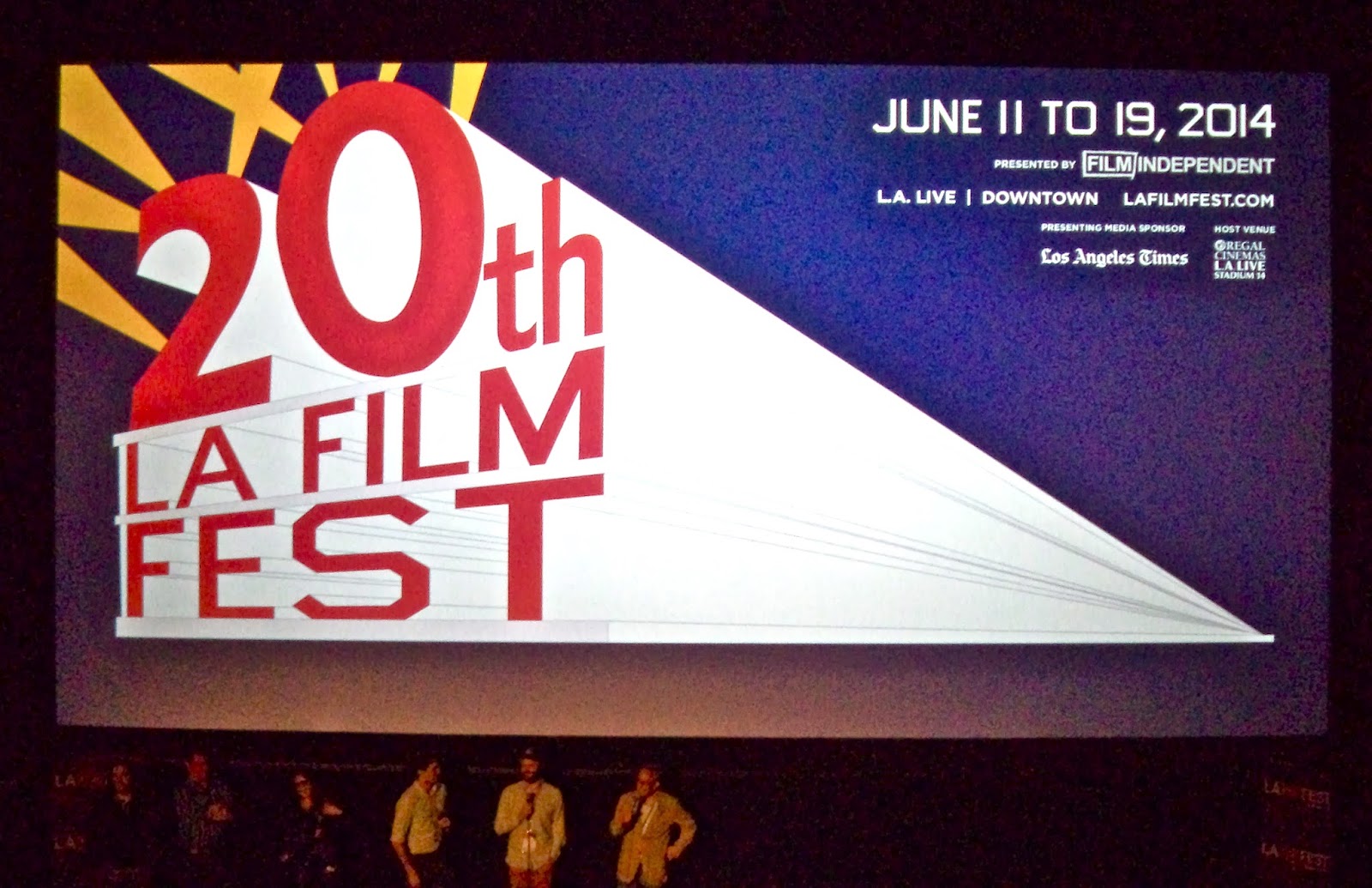 We don’t attend the L.A. Film Festival every year, but did manage to find time to see four movies this year. All of them were excellent—which is not always the case—so it was worth the schlep downtown during the week, when we’d normally be vegging out in front of the TV. Here are my quick reviews:

Tim served in the Navy during the war. My family and I watched daily coverage on the nightly news. I doubt either one of us will ever get over Vietnam. Directed by Rory Kennedy, the film effectively uses archival footage to chronicle the fall of Saigon in April 1975, while also honoring the unsung military as well as non-military heroes who stayed in-country till the bitter end. This is a very moving and edge-of-seat story, even though we already knew the ending. Rory, who was the creative force behind the outstanding documentary Ethel, about her mother Ethel Kennedy, introduced the film and took questions afterward. Watch for Last Days in Vietnam later this year as an American Experience episode on PBS.

The Battered Bastards of Baseball

I’ve loved Kurt Russell since he appeared in the Disney film The Computer Wore Tennis Shoes in 1969, but I never knew his father was famous, too. Not only did Bing Russell play the deputy on the long-running TV show Bonanza, he also owned an independent baseball team, which ended up making sports history in the mid-1970s. Directed by his grandsons Chapman and Maclain Way, this wonderful documentary captures the incredible story of Bing Russell’s unconventional Portland Mavericks. Seems like the entire Russell clan was in the audience, including Kurt’s mother, but unfortunately no Kurt. The movie was bought by Netflix and will be shown in July. Highly entertaining!

Unless you are completely plugged into the movie scene, which we are not, sometimes it’s risky buying tickets for films listed only by title, actors, director, and a brief description in the festival program. We’ve been burned before. But this movie was great. Made very much in the quirky flavor of A Simple Plan and everything by the Coen Brothers, Cut Bank is a terrific example of a small town caper gone horribly wrong. It is, of course, also very violent and darkly funny and has an incredible cast that includes John Malkovich, as the sheriff who suddenly has to investigate his town’s first murder, and an hilarious Bruce Dern as the victim. A Q&A with the filmmaker and cast members Teresa Palmer and Oliver Platt followed the screening.

The Two Faces of January

Based on the Patricia Highsmith novel of the same name, the story is set in 1962 Greece, where a rich American couple (Viggo Mortensen and a luminous Kirsten Dunst) meet a young ex-pat con man, named Rydel Keener (Oscar Isaac). As in The Talented Mr. Ripley, also based on an Highsmith novel, it quickly becomes apparent that things are not as they seem, making for a good old-fashioned yet exciting thriller. Plus the scenery is gorgeous. Due to be released in theaters later this year. 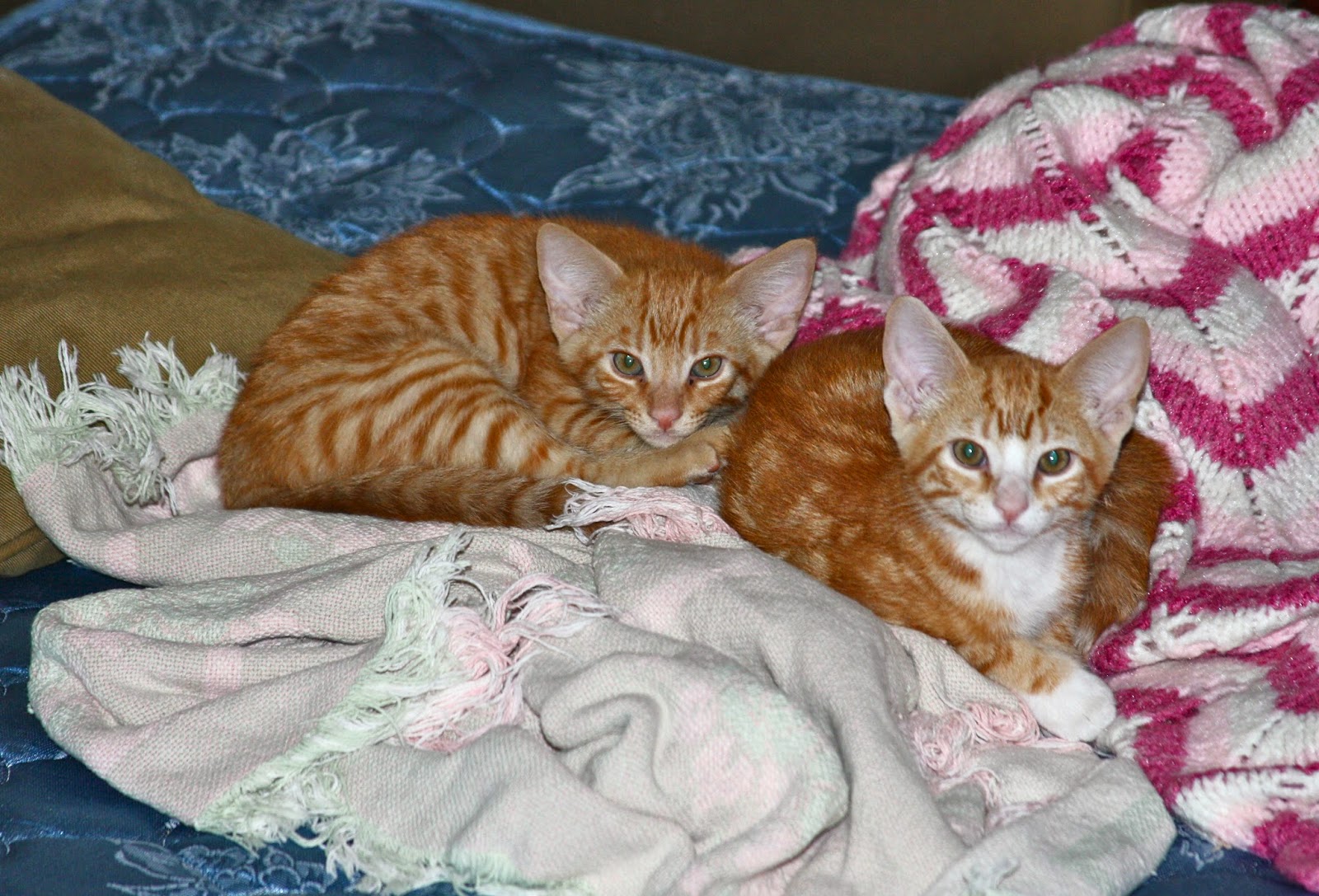 Our new boys—three weeks ago

After our cat Cecil suddenly died last year, I announced that I wanted no more pets once Cecil’s brother Beanie dies. Cecil’s death had been so unexpected and devastating, I just couldn’t stand the thought of going through it all over again in 15 years when we’d be well into our 70s.

But then Beanie got seriously ill—from a broken heart and loneliness—and I began imagining my life without cats—not a happy thought. Coincidentally, my long-time friend Karen H. emailed, saying that a stray cat had dropped a litter of kittens in her garage. I could feel myself starting to melt. She then sent photos and, sure enough, there were two orange tabbies, looking very much like a young Beanie and Cecil. They joined our family three weeks ago. Yesterday, they turned three months old. 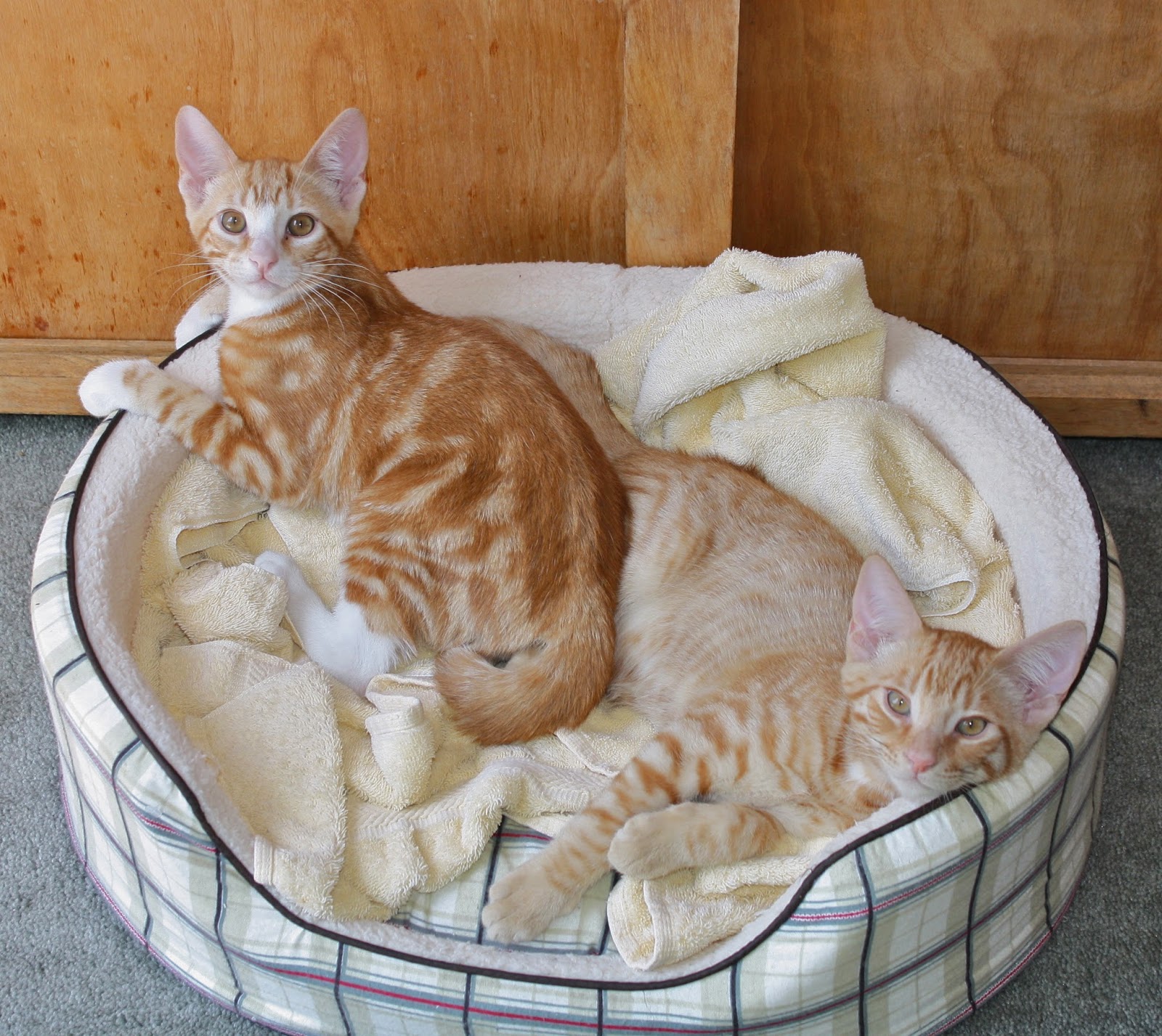 The first order of business was, of course, figuring out their names. Because of their prominent ears, I immediately thought of "Spock" and "Quark"—two favorite Star Trek characters known for their unusual lobes—but instead wanted names that reflected the fact that they’re brothers. So we settled on Jack and Bobby, though we doubt either of them will ever have any political aspirations. 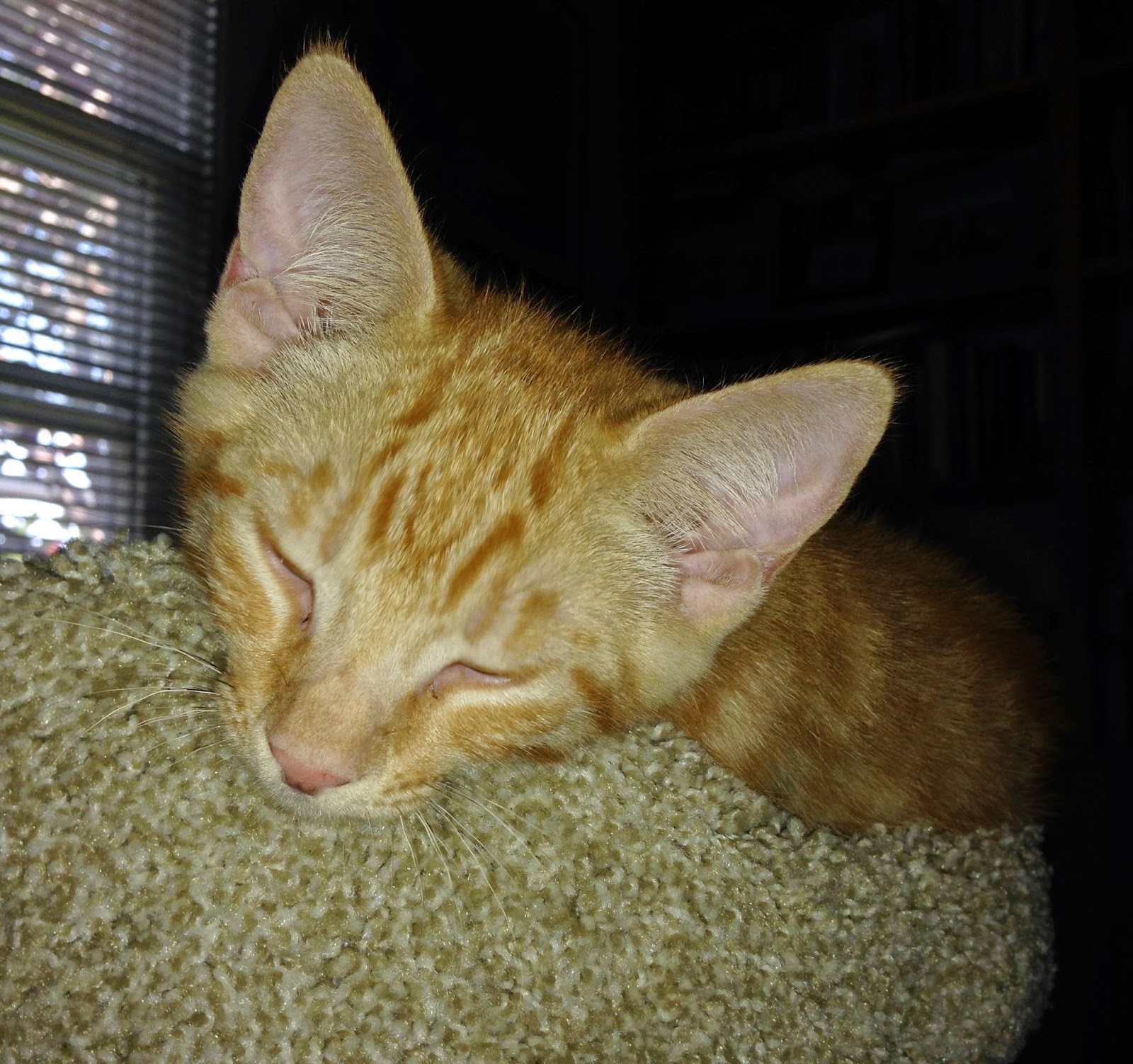 Next up: preparing the house for invasion! 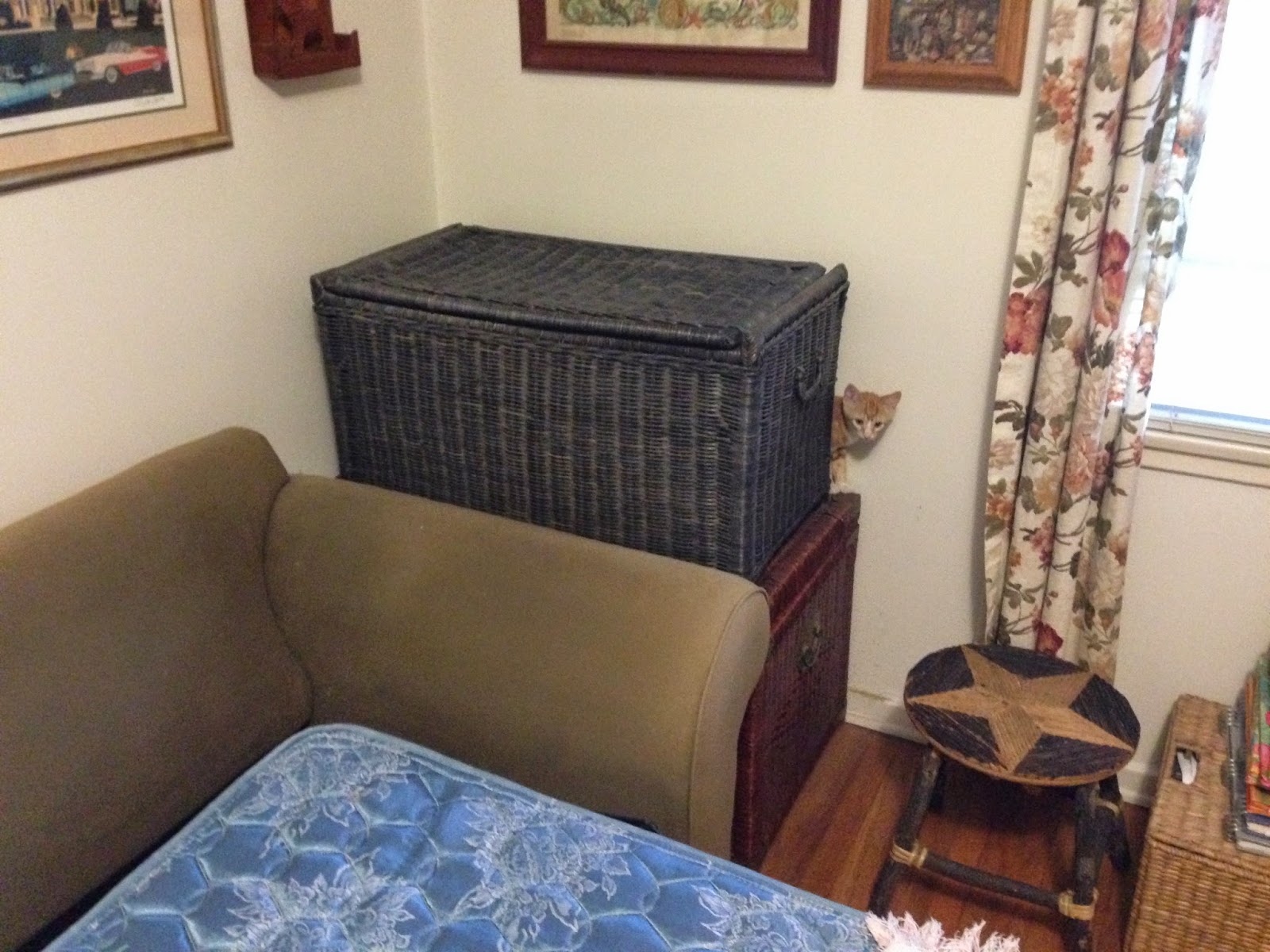 Beanie and Cecil were six months old and already neutered when we brought them home 14 years ago. They tromped around and wrestled. We laughed and were entertained, but never really had to change our lifestyle to accommodate them. Ten-week-old kittens take craziness to a whole new level, however. Nothing escapes their eye and everything—no matter how priceless or fragile—is fair game. All perishables are now either packed away or moved to a shelf at least four feet off the ground.

The first hour of every day consists of emptying litter and replenishing food and water bowls. The boys then help me make the bed and do whatever other chores need to be done that morning. They especially love the broom, which provides endless fascination. I work at home, so they often join me in my office until I ban them for being too distracting. Beanie and I both like when they conk-out for a few hours after having spent all their energy playing.

Beanie, by the way, didn’t know what to make of them, at first, and would run away whenever they approached. But now they have all seemed to reach some sort of feline detente, thanks mostly to Bobby’s good-natured diplomacy, and all three sleep with us at night. Tim and I are definitely outnumbered! 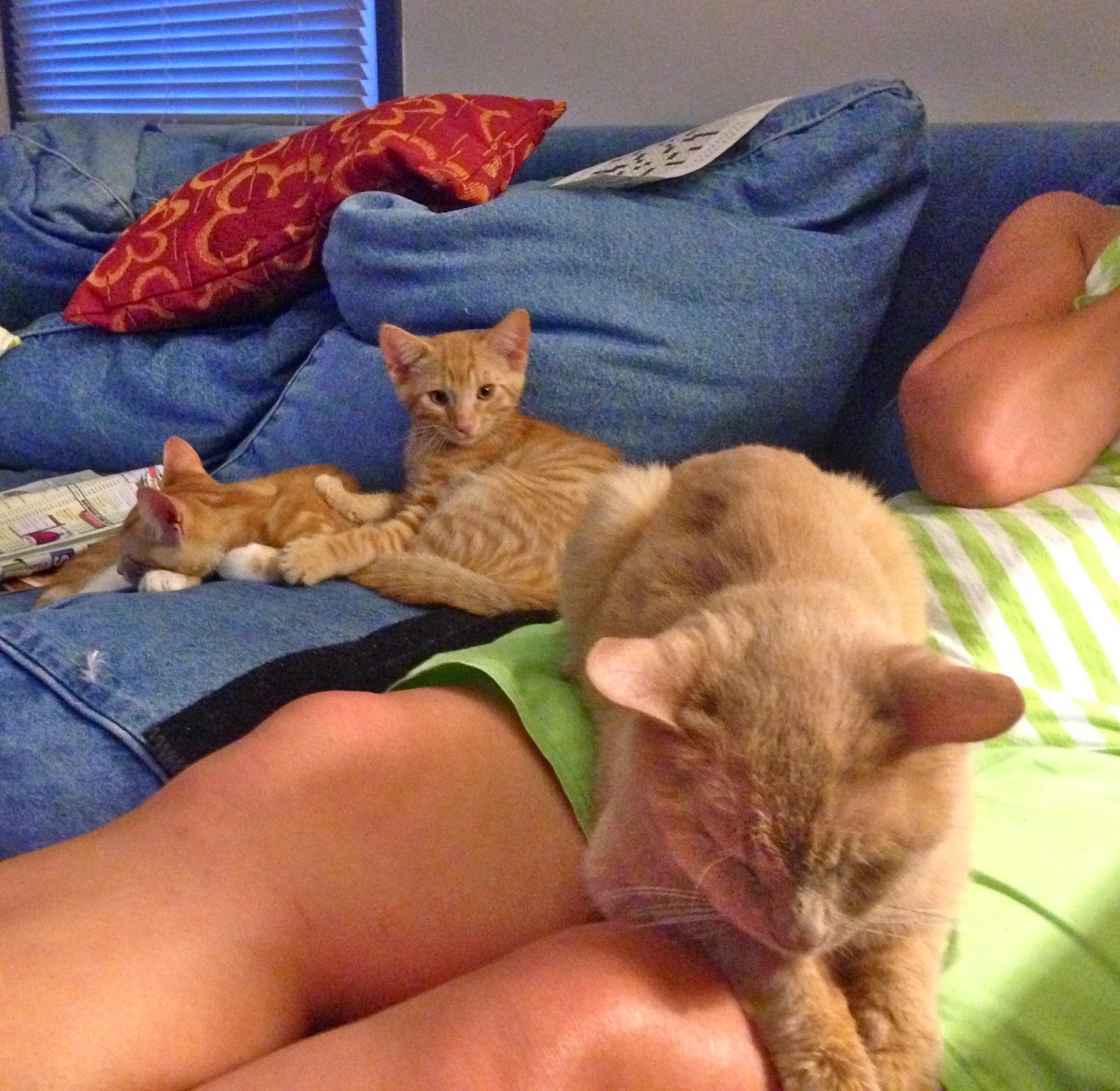 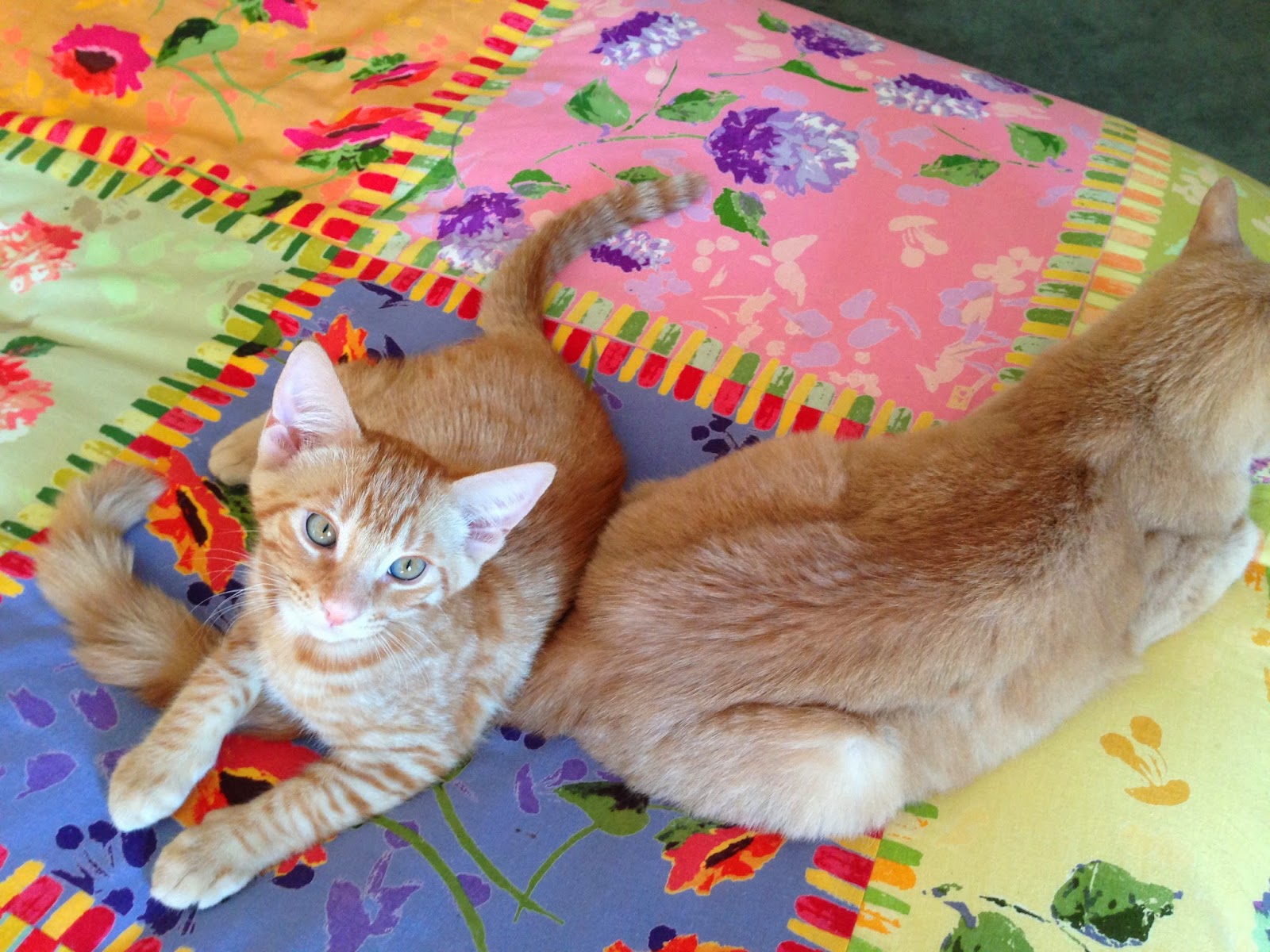 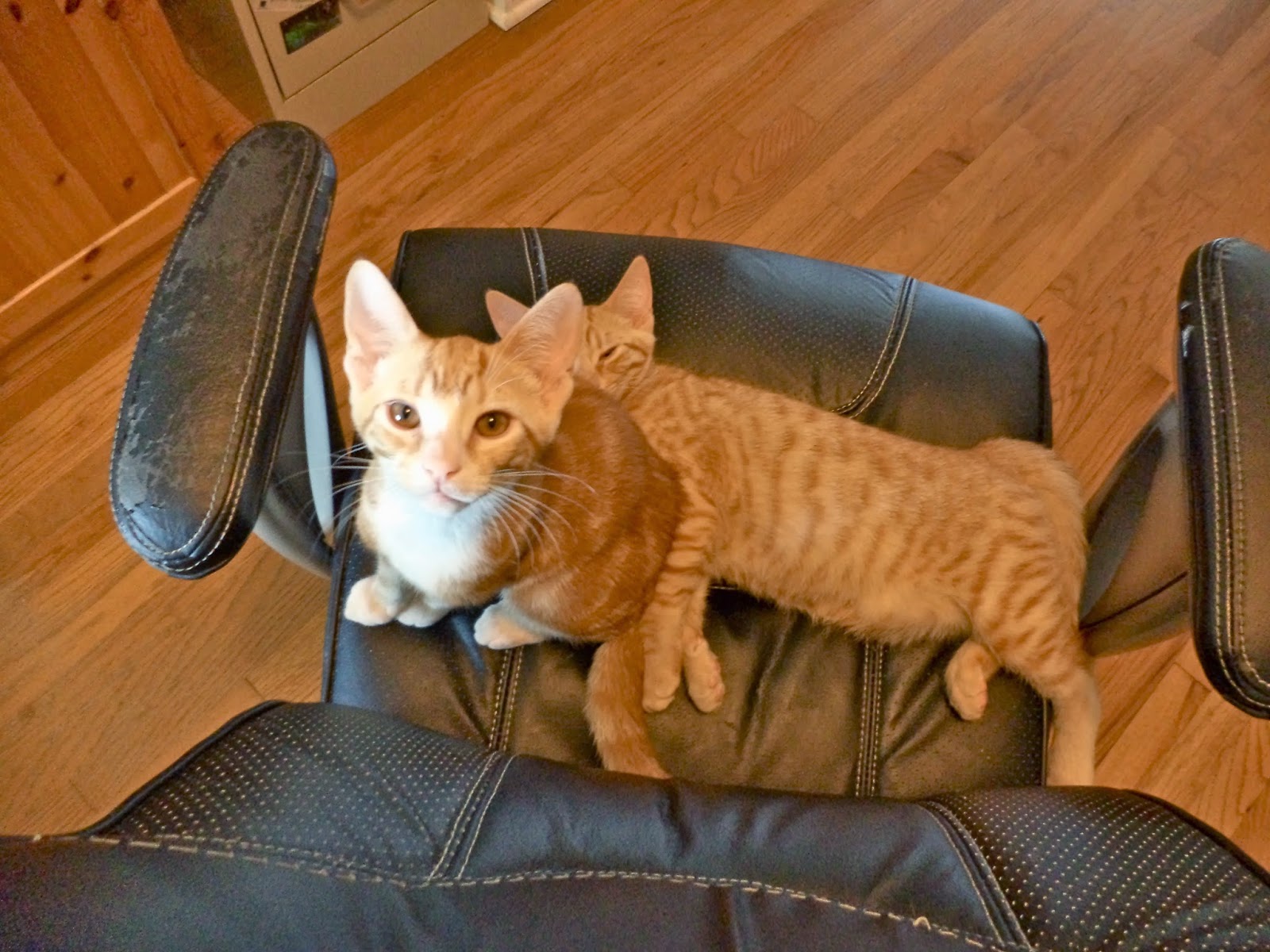 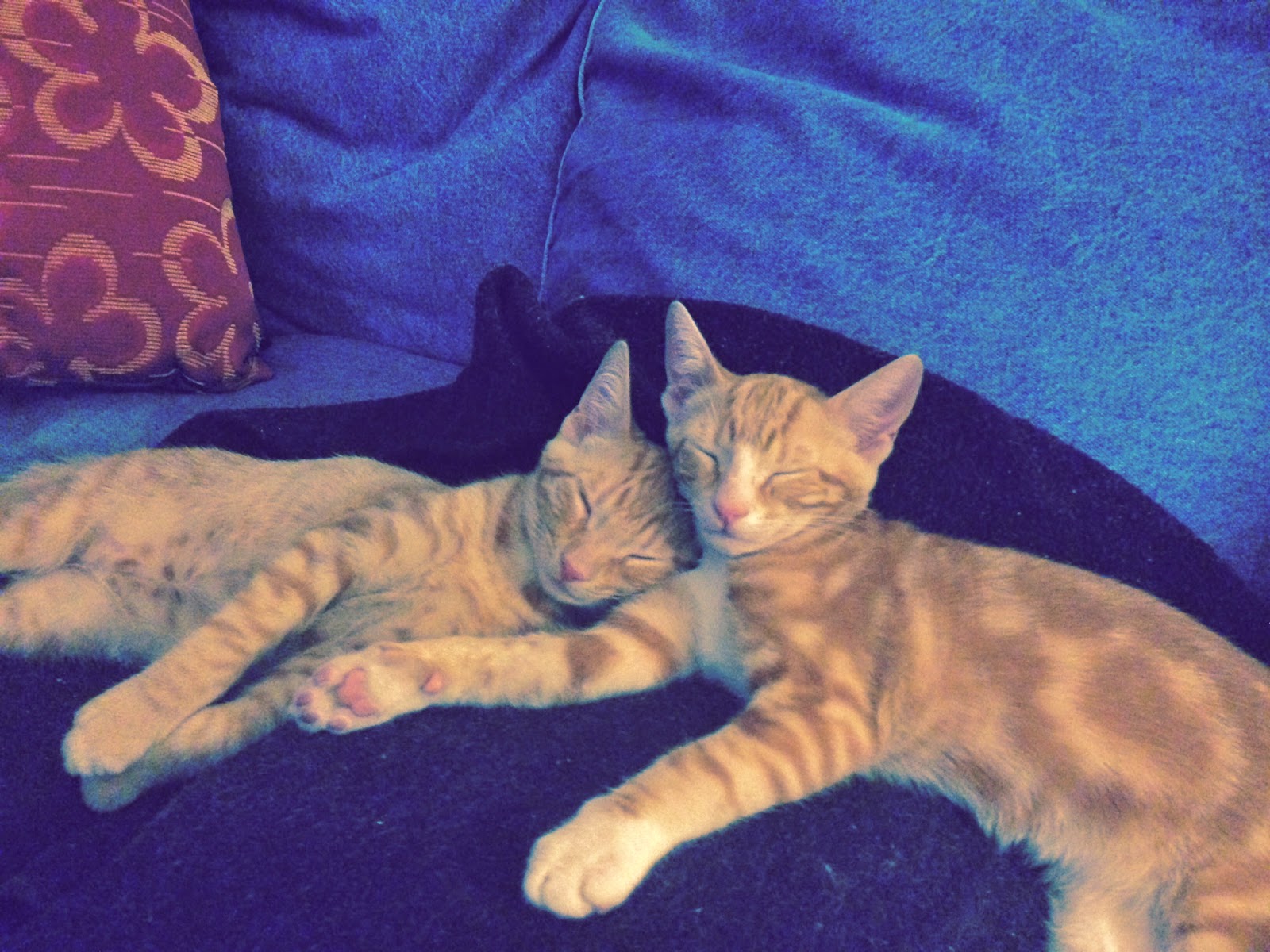 
Like everyone else my age, I own a copy of The Beatles’ Second Album, but it was never one of my favorites. Cobbled together by the Beatles’ record company to capitalize on their blockbuster success, the album features several “covers” of rock standards, which I didn’t like as much as the Beatles’ own original music. So I rarely listened to it. Tim, however, loves the album for all the reasons I didn’t: hard-rockin’ versions of Little Richard’s “Long Tall Sally,” Chuck Berry’s “Roll Over Beethoven,” Smokey Robinson’s “You Really Got a Hold on Me,” and Barrett Strong’s “Money”—all songs that I, of course, now love. In fact, fans and critics alike agree that the Second Album is the Beatles’ best pure rock ‘n roll record ever released.

The Grammy Museum celebrated the album’s 50th anniversary, last night, with a good old-fashioned record listening party. The host was Marvin Etzioni, who provided a bit of historical context—including playing the truly dreadful “Sie Liebt Dich,” the Beatles’ “She Loves You” in German—before dropping the needle on a vinyl copy of The Beatles’ Second Album, in glorious monaural. It was almost as good as being 10 years old again, listening at home alone in my bedroom.

Surprisingly, the 200-seat theater was nearly full. The audience obviously dug the music, applauding after every song. But I noticed it was mostly people of a certain age (e.g., us) who really rocked out. Air drums seemed to be the instrument of choice. (Guilty!) Afterwards, Etzioni led an animated Q&A session with Jack Oliver, former president of Apple Records, and Brian Kehew, co-author of the book Recording the Beatles. They explained why the record was released exclusively in the U.S., briefly debated the differences between the British and American versions of the Beatles' albums, and described the advantages of mono vs. stereo, among lots of other things. What a perfect way to spend a Tuesday evening.