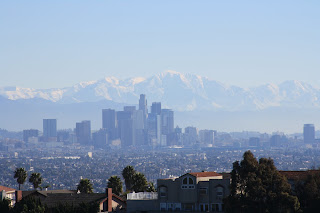 The weather guys and gals were almost giddy predicting snow in L.A. over the weekend. Although it apparently snowed in Burbank late yesterday, the only white stuff we saw was up on the mountains this morning. These were taken from Kenneth Hahn park—one of our most favorite spots in all of Los Angeles county. Downtown L.A. and the Hollywood sign never looked so beautiful! 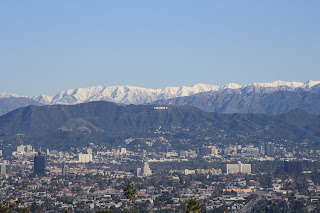 Tim took these 30 minutes later from the Baldwin Hills outlook above Culver City. No snow, but spectacular nonetheless. 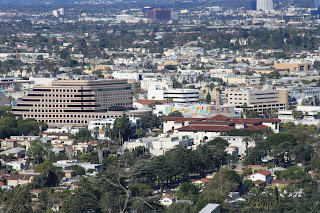 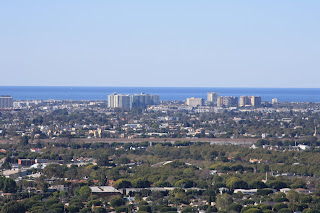 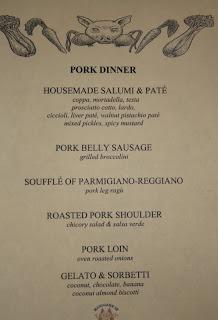 I stopped eating red meat over twenty years ago, but never gave up pork (or beef tacos, for that matter, but that’s another story . . .). In fact, pork is our favorite food—we serve it at all special occasions and adore it in all its forms: bacon, pork chops, carnitas, babyback ribs, ham, etc. No wonder, then, that we flipped when we heard that Mozza, one of L.A.’s top-rated Italian restaurants, had begun offering a multi-course pork dinner every Saturday. January was sold-out, so Tim made a reservation for Karen and us last night.

Seating was family-style (i.e., one long table for everyone). We got there a half-hour early to make sure we could all sit together. There was no need to worry: places for 30 were already assigned and the menu at our three settings had Tim’s name on it. The diners seemed to be mostly “industry” folk (i.e., people who work in show biz) and at least one couple was from out of town (San Francisco). Almost everyone dressed up. I, on the other hand, opted to wear stretch-pants with an elastic waistband—there was no way I was going to be limited by constrictive clothing.

Dinner started at 7:30PM with fresh-baked foccacia. We’ve seen our fair-share of multi-course dinners before—mostly as fund-raiser events—but this was more like the movie Big Night, where a pair of brother chefs decide to cook the meal of their lives in hopes of saving their restaurant. Their dinner—a masterpiece—goes on all evening. Unlike the movie, though, last night’s feast did not include dancing between courses—which was too bad, because I think any type of exercise would have gone a long way toward helping us better digest our food. As it was, we just sat and ate for three hours.

Our host was Matt Molina, a 2010 James Beard finalist for best chef on the Pacific coast. Happily, our seats faced the open kitchen so we could watch him work his culinary magic.

The first course was salumi and various patés. I’m not a big cured meat fan, so was able to resist. Everyone else piled it high. I thought to myself, “There are at least five more courses to go—pace yourselves!” But apparently I was the only one who listened to her inner voice. 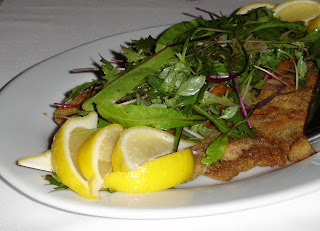 Next was pork belly sausage with grilled broccolini. I like my sausage almost burned to a crisp (a Philistine, I know!), so only nibbled off of Tim’s plate. The broccolini was good, though, marinated in olive oil and hot spices. While the next advertised course—soufflé of parmigiano-reggiano—was baking, chef Molina brought out a surprise course: scaloppini made from muscle meat left over from that week’s butchered pig. He had pounded, breaded and fried it to perfection, then served it with tasty greens. 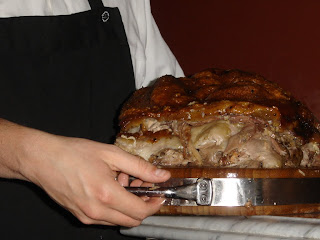 Finally, after quite a long while, the soufflé emerged to a round of “oohs and aahs.” As expected it was heavenly, as was the pork leg ragù served along side. The highlight for me, though, was the roasted pork shoulder that followed. After presenting it for all to see, the meat was chopped and served with a chicory salad—now we’re talkin’! I, unfortunately, ate just a little too much of the shoulder, however, and so left the table as soon as the main course, pork loin, appeared. One too many pork plates for me (a wimp, I know!). But Tim and Karen stayed till the end, enjoying various flavors of gelato and sorbetti for dessert. They saved an after-dinner cookie for me. It was, of course, shaped like a pig!

Our review: Although we both had something of a meat hangover this morning, we heartily recommend Mozza’s pork dinner for all who love “the other white meat.” The food was fabulous and we had lots of fun watching Molina meticulously prepare each course. But be forewarned—there’s a lot of food here, so you may want to fast the day of the big event. Or at least pace yourself as you joyously move through each course. You don’t want to miss dessert, like I did. 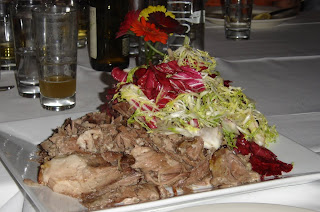