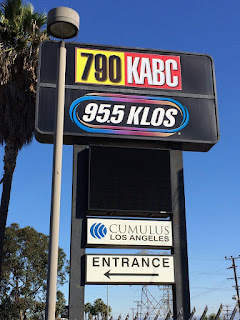 In the summer of 1951, my grandparents sent my mom to Los Angeles to visit her sister, who had recently moved from NYC. They said the trip was her gift for graduating high school, but Mom knew they were really getting her away from her much-too-serious boyfriend. The plan worked, but backfired. Though she did forget the boyfriend, she quickly found a new love—the state of California!—and so wrote to her parents that if they ever wanted to see her again, they would have to move to L.A. Within weeks, they sold their apartment in NYC, flew to California and bought a house on Genesee Avenue, a block east of La Cienega Blvd. in Los Angeles. Nana and Abuelo lived there until they died in the 1970s.

I have fond memories of my grandparents’ home, which we visited at least once a month when I was a kid. The neighborhood was far more racially diverse than my hometown, Burbank. Even more fascinating, however, was the radio station, located just a block away on La Cienega. I no longer remember the actual station facility, but I do have vivid memories of its two towers that stood tall day and night, rain or shine. Little did I know that my future husband would eventually work there.

Tim became a radio engineer at KABC/KLOS in 1996, during the heyday of “AM talk radio” and FM’s Mark & Brian morning show. He loved every minute of his job until, 11 years later, parent company Disney sold the station to another media conglomerate. Tim then moved on to KSPN. Still, we were both devastated, last year, when we heard the studios and towers were sold and would be demolished to make way for a huge condo complex.

The towers, which were erected in the late 1930s, came down last week. The building, as you can see below, has been gutted and will soon be razed. A sad ending to an important era and, I fear, perhaps a sign of more change ahead as radio is slowly replaced by other far trendier media. 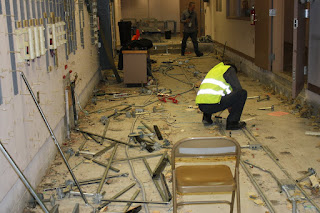 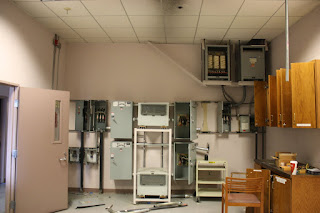 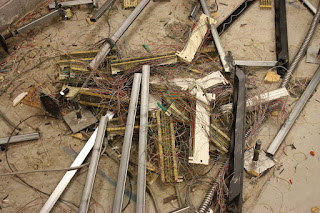 Wires and other detritus 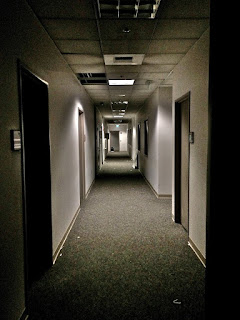 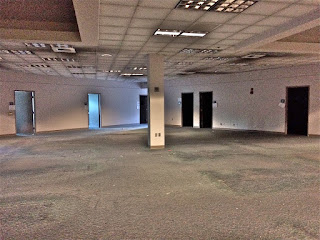 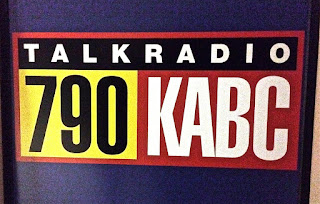 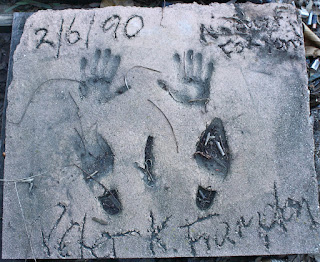 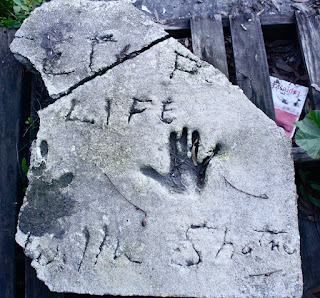 William Shatner, as well—but too heavy to bring home (sob . . .) 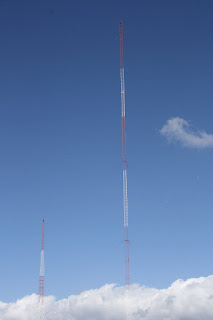 The towers, two weeks before demolition 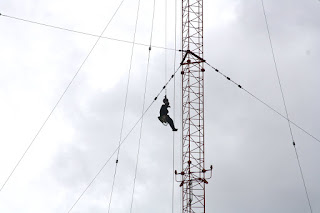 Tim's video of Tower 1 coming down 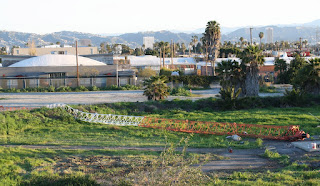 Next morning: Tower 1 down 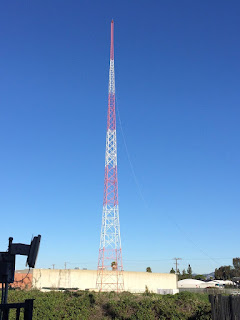 Tim's video of Tower 2 coming down

My video of Tower 2—exhilarating to watch, but very, very sad 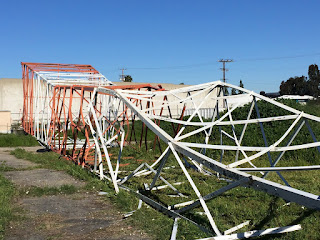 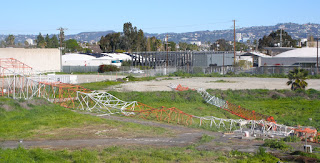 Both towers now down 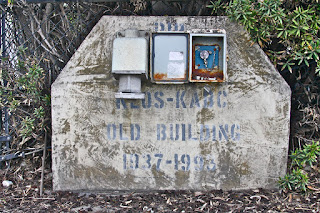 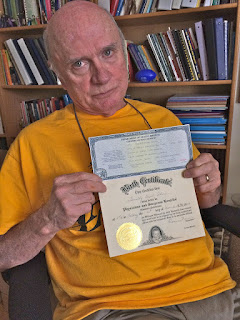 Tim and wrong birth certificates
Guest blogger Tim shares a cautionary tale about renewing his passport . . .
I realized in mid-December that my passport had expired in March 2016. Time to renew!

Going online I accessed all the PDF forms, filled them out and had a couple of pictures taken at the FedEx store. I wanted to get it as soon as possible, so I decided to mail all the pages to the “expedite” address. I re-checked all the forms to insure my info was correct, stuffed them in an envelope along with my expired passport and went off to the post office. Only after I had returned home did I realize that I had not enclosed the check for the various fees involved. Is this the kind of crap I’m going to go through as I age, forgetting the easy stuff?

I called the State Dept. in a panic. The clerk said, “Don’t worry about it. When they see there’s no check, they’ll send the whole package back to you. Give it a couple of weeks.” That was on December 27.

Nothing by January 23, so I called them back. The clerk looked through their database; no record of my stuff. “Consider it lost” was the casual reply. “You’ll need to fill out a form DS-64 for a lost passport along with all the other forms you filled out.”

Luckily, I had saved the completed forms on my desktop; no big deal. She also informed me that since I was now applying for a lost passport I needed to go in person to complete the process. Looking on-line, I saw that Culver City had an office at City Hall that did the processing. Email for an appointment. I did and got a date in early April. No way! What if I got the urge to jet off to Paris? I’d have to wait until April (cue the Count Basie version of “April in Paris”). The only other local place was Santa Monica with a date of March 16. I made the appointment with an eye toward looking for an earlier date elsewhere.

This is when I learned about the post office on Airport Blvd near LAX. No appointment needed! Come on down! They do all the processing on a first-come-first-served basis—open 9AM to 4PM. I gathered all my paperwork, birth certificate, photo and drivers license, and headed down around 9:30 the next morning.

There is a two-step process at the post office. First you stand on line to show your paperwork to a postal worker, who makes sure you have all the forms filled out correctly (black ink only) and have your IDs and birth certificates all in order. Then he sends you to a room where you are actually interviewed and the paperwork is processed and paid for. It is a slow-motion process, just like the DMV. It also seemed that 50% of the people had something wrong with their paperwork and were sent off to correct it, this after spending 45 minutes in line. I thought “Man, am I glad I’ve got MY shit together!”

My turn arrived at the window and the clerk looked at my pile of papers and asked, “What’s this?” pointing to my birth certificate. I explained the obvious. “We do not take hospital birth certificates,” he explained. “It must be the one issued by the county.” I pictured Seinfeld’s Soup Nazi yelling at me, “No passport for you!” while pointing to the door. I know I didn’t have a county issued birth certificate, but I did recall having a “Certified Abstract of Birth” issued by L.A. County somewhere at home. I believe I used it when I got my original passport back in 1989.

Went home, found it and made plans to go back the next day. Went through the line again, this time in only 35 minutes. This time he said, “We don’t take abstracts anymore. It must be an actual copy of the certificate issued by the county. You can go to the courthouse just off I-105 and Sepulveda and order it from there” He pointed out the small print on the form, where it says this, as his arm once again gestured toward the exit.

My head was starting to hurt as I drove down to the courthouse. I filled out the form on the computer in the lobby and went to the window. $28 later I was told that it should arrive within 20 days. I asked the clerk about the abstract not being good anymore. “Ever since 9/11, they quit taking those,” was the response. The terrorists, I concluded, have indeed won.

I received my copy in the mail in under 20 days. Went early today to beat the line. Got there at 8:20AM and there were about 25 people already in line. To pass the time I timed the interval between jets screaming directly overhead us as they landed on the north runway at LAX—every 2.5 minutes on average. Door opened at 9AM. Several people turned away again at the first checkpoint. Finally got to the window around 10:15AM. I was good. He said my first lesson in this should be “don’t lose your passport.” I wanted to tell him I wasn’t the one who lost it, but just smiled instead and said “yup.” Onto the next room.

My number was called after 15 minutes. I told the clerk that I wanted to expedite. She said I had to be going somewhere within 2 months to purchase that option. At that point, I wanted out, so I just said, “OK, I’ll take standard.”

In 6 weeks or so I should be able to go to Paris if I want to. I also cancelled the Santa Monica appointment.