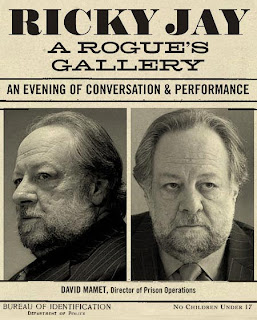 We’ve been fans of Ricky Jay since he played the cameraperson in Boogie Nights, one of my all-time favorite movies. Since then he’s appeared in David Mamet’s Heist and numerous other movies, the HBO series Deadwood, and was a recently revealed clue to the mystery behind the current TV show FlashForward. But he is probably best known for being a master sleight-of-hand artist as well as scholar and collector of curiosities.

Several years ago we saw Ricky speak at the UCLA library, where he described his fascination for all things unusual and deceptive: e.g., 19th century automatons, carnival folk, notorious card sharps, and illusionists. A few years later, we bought front-row tickets for Ricky Jay and His 52 Assistants, an intimate show where he performed the most amazing card tricks either of us had ever seen. We talked about it for weeks.

On Tuesday, we attended the opening night of A Rogue’s Gallery, Ricky Jay’s latest show. The performance was hugely engaging, even though we were seated in the very last row of the balcony (comp tickets for making a donation to the Geffen Playhouse’s education fund). In addition to his usual card tricks and fetes of mental magic, Ricky projected images of 108 posters, playbills, and other paper items—a mere fraction of the marvelous ephemera he has collected—which then led to amusing tales of sword-swallowing women, lion-tamers, and other interesting characters. All in all, a highly entertaining evening.

A Rogue’s Gallery is playing at the Geffen till January 10. Go see it if you like parlor tricks and/or good ol’ fashioned storytelling.
Posted by Cyn at 2:18 PM No comments: 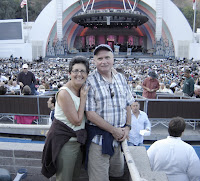 Looking back on another memorable year! 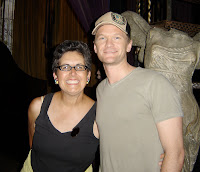 What we’re grateful for: 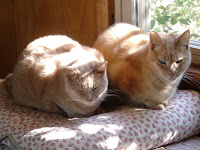 Family, friends, jobs we love, and good health; living in Culver City, L.A.’s most happenin’ neighborhood; our cats Beanie and Cecil, who are now 9 years old and continue to bring us joy; and our new great-nephew Henry Nash Clark (thanks Beckie and Steve!).

Trips to Portland and Washington D.C.; playing with our new Apple computer (thanks Santa!); and watching the wildflowers bloom in our yards next spring.

Have a wonderful new year. Our love to all! 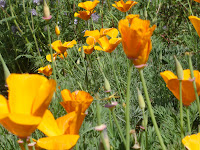 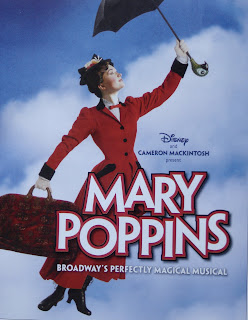 I was only 10 years old when I had my appendix removed in 1964. I remember the pain and my mother crying. But I also remember, quite fondly, the book that kept me company while I was in the hospital: Mary Poppins by P.L. Travers. It was the first full-length novel I read and was thoroughly enchanting. We had seen the movie, which came out earlier that year, but there was something quite captivating about the book’s Mary Poppins. She has held a special place in my heart ever since.

One of the reasons I subscribed to Ahmanson theater season tickets this year was to see Disney’s musical adaptation of Mary Poppins. I originally had tickets with Karen, but had to change dates because of out-of-town guests. So I went by myself last night (Tim is not a fan of the nanny). I had a third-row center seat—absolutely perfect. It was me and lots of parents with young children—and on a Wednesday night, too!

The play was wonderful, though slightly different from the movie. For one thing, this Mary is a lot less snooty than Julie Andrews and seems to genuinely care about her two wards, who are also very good in their roles. Bert is terrific and brings the house down during “Step in Time,” when he (spoiler alert!) dances upside-down on the stage ceiling. It was completely breath-taking! Mary also flies several times, which is exciting, especially for those of us afraid of heights. But the biggest thrill, of course, is “Supercalifragilisticexpialidocious.” Almost every cast member was on stage dancing and miming the letters of my favorite word when I was a kid. I wanted to scream the lyrics, but somehow managed to keep my mouth shut. The audience went wild.

As wonderful as Mary Poppins is, I always cry at the end when she (last spoiler alert!) leaves—partly because I wish she and Bert could stay together, but mostly because the magic is ending. The play is on till February 7. I highly recommend getting tickets right now before Mary flies off again.
Posted by Cyn at 8:43 AM 1 comment: