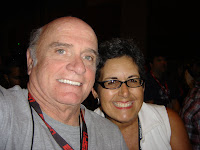 What a great year it's been!

Fun things we did this year:

What we’re grateful for:

Family, friends, jobs we love, and good health; our cats Beanie and Cecil, who bring us joy every day; our wonderful home; and 24 happy years of marriage.

Wishing you all a wonderful new year! 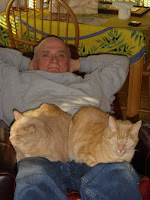 Since we don’t have kids, we usually treat ourselves to a big gift every Christmas. Last year it was a new computer. This year we decided to go to Orlando—a place we’d never been, even though I’m (as you probably already know!) something of a Disney nut. We left L.A. on Saturday morning and arrived back home late Wednesday night.

We roomed at the Beach Club Resort, one of the nicest but oldest Disney properties. The resort’s main advantage: it’s within easy walking distance of Epcot, the most “adult” of all the Walt Disney World (WDW) theme parks, which we visited several times during our stay.

Epcot is actually two parks in one: (1) Future World, a more traditional Disneyesque experience with attractions focused mostly on ecology and the future and (2) World Showcase, a mini-world’s fair of exhibits and food from several international countries. Our first morning there, we made a beeline straight to the Spaceship Earth geosphere—the iconic golfball-shaped building that greets all Epcot visitors. Inside we traveled from the stone age to the information age, culminating in a very clever video that’s tailor-made for every person participating in the ride. (Click below to see ours.)

Very fun! The rest of the park, though, was rather mediocre. The various “countries” offered an interesting array of restaurants (that serve alcohol!), but the attractions were embarrassingly outdated and stereotypical. No need to ever return. 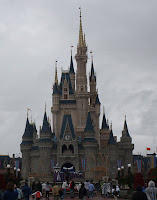 From Epcot we took the monorail to the Magic Kingdom, Disneyland’s fraternal twin. Visiting the Magic Kingdom was weird for both of us. Although the layout is very similar to Disneyland, it’s enough different that we felt like we were in an alternate universe. Everything is also more spread out in the Magic Kingdom; plus there’s no Matterhorn (!!). And the castles aren’t the same: Disneyland has Sleeping Beauty’s castle, while the Magic Kingdom’s castle is home to Cinderella. I longed for the familiarity of Anaheim! 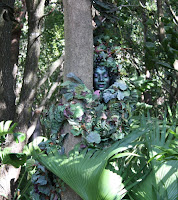 Temperatures plummeted into the 30s on Monday, but we mushed ahead anyway to the Animal Kingdom, one of the newer and best WDW parks. Built in 1998, Animal Kingdom feels like a true extension (rather than recreation) of Disneyland and does a good job of promoting animal preservation, one of my favorite topics. We enjoyed the half-hour Finding Nemo stage play, performed with puppets (a la The Lion King). We also went on the Dinoland, U.S.A. ride, which is similar to Disneyland’s “Indiana Jones” but with dinosaurs instead of Harrison Ford (!). The best part, though, were the live animals featured in several of the park’s attractions. Foremost was the Kilimanjaro Safari that takes visitors through some 100 acres of transplanted savanna, forest, and rocky terrain. Now I’m not one for zoos or other artificial animal habitats, but this was really quite wonderful.

We saw all kinds of African fauna, including flamingos, giraffes, hippos, lions (spectacular!), and elephants. 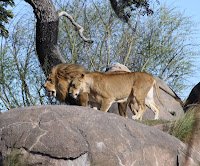 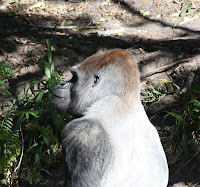 The highlight, however, came after the tour when we walked along the Pangani Forest Exploration Trail and saw a family of silverback gorillas. What a thrill!

Did we end up having a good time? Absolutely, especially when combined with our trip to the Kennedy Space Center (see the separate blog entry below). But whenever I need a Disney fix, I’m glad all I need to do is drive 35 miles to Anaheim and visit the Happiest Place on Earth. Sure, Orlando’s Downtown Disney—with its miles of endless shopping, restaurants and fun nightlife—is far superior to ours, but the rest doesn’t hold a candle to the original Disneyland. (If only Animal Kingdom could be transported here!) Plus, Walt Disney World is far too enormous. You literally need a car to get from one park to another. You can rely on the free shuttles, but they take FOREVER! I swear we spent at least 10 hours waiting for shuttles to take us to and fro.

Will we ever return? Of course! We barely scratched the surface of things to do and see. But next time we’ll go in the spring and rent a car for our entire stay.

One of my earliest childhood memories is of watching astronaut Alan Shepard blast-off from Cape Canaveral to take the first U.S. trip into space. The event was so historically significant that my 1st-grade teacher brought a TV to class so we could all watch. I was immediately hooked on space travel.

Oddly enough, it never occurred to me that Orlando is only an hour away from the Kennedy Space Center—that is, until Tim’s boss mentioned we might need a break from Disney while there (thanks Mike!). Boy, was he right! On Tuesday, we rented a car and drove to the Kennedy Space Center, home to NASA and my childhood dreams of space exploration. Hands down, it was the highlight of our vacation. 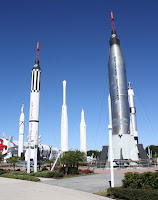 Much like Walt Disney World, the Space Center is spread out over many miles, most of which are accessible only by tour bus. The visitor center features a rocket garden of early spacecraft, exhibits about the U.S. vs USSR "space race," an IMAX theater, and an open space shuttle. There’s also an astronaut hall of fame, located a couple of miles away, and a fabulous offsite Apollo/Saturn V Center, which houses an example of the monstrous Saturn rockets that carried the Apollo moon missions into space. To get the real flavor of the place, however, you have to pay extra to take a tour of either Cape Canaveral (”Then and Now”) or the shuttle assembly building, launch pad and landing strip. We opted to revisit our youth and so toured the Cape.

Some of the launch pads are still active; but the most impressive ones were those where Shepard, John Glenn, et al., lifted off in the 1960s. We toured the “blockhouse” where Shepard’s first flight was counted down 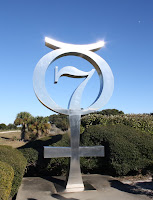 and took pictures of what remains of launch pad 14, where Glenn’s historic Friendship 7 flight originated.

The most emotional site, though, was launch pad 34 where the crew of Apollo 1 burned to death during an on-ground test run. Although it was a horrible time for the space program, NASA eventually recovered and launched Apollo 7 from this same site.

The dramatic concrete pad base

and huge flame diverters remain on the site, as does a memorial to the three Apollo astronauts who lost their lives.

Tickets to the Kennedy Space Center are good for two days. “That’s strange,” I thought when we paid our entrance fee. But now I know why. Spending only one day at the Space Center is not nearly enough. The next time we’re in Florida, I hope to schedule at least two days on Cape Canaveral as this was truly one of the most amazing places we’ve ever visited.