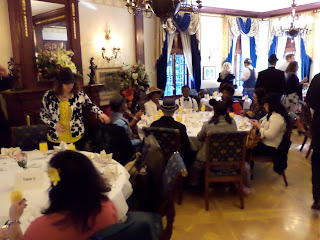 Yesterday was “Dapper Day,” an unofficial yet coordinated event where Disney fans visit their favorite theme parks while wearing their finest apparel. Now in its third year, Dapper Day was inspired by the original Disneyland drawings that often featured extremely well-dressed guests enjoying a day at the park.

To celebrate, we met several of our new “Dress Like Walt Day” friends for breakfast at Disneyland’s Club 33. As always, it was a fun morning of food and all things Disney. But the best part was seeing people walking around the park, dressed-up and looking splendid in their hats (women as well as men) and full petticoats (women). Tim and I got several compliments on our outfits. See for yourself: 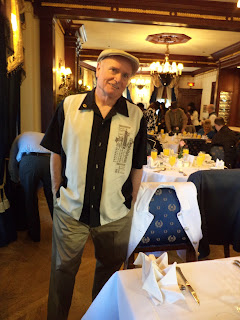 Tim in his finest 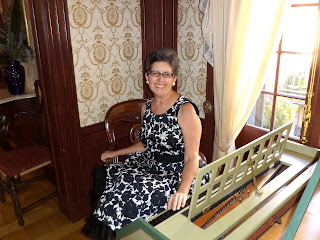 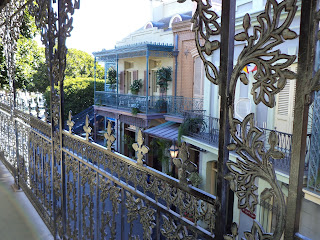 New Orleans Square- the view from the Club balcony 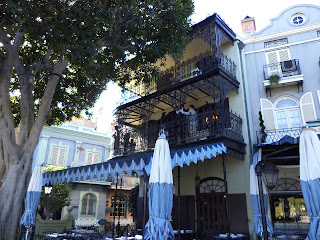 Looking up at the Club 33 balcony
(directly above the awning) 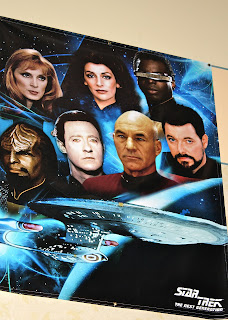 Karen and I started going to Star Trek (ST) conventions (“cons”) in the mid-1970s, when they were small homegrown affairs held in the basement of the LAX Marriott hotel. In those days, the fans mostly just watched film versions of ST episodes projected on a screen at the front of a large ballroom (long before the show was universally syndicated) and sold unique memorabilia to each other (decades before eBay). But then Star Wars happened and science fiction cons were never the same. In the 1980s/90s, convention halls and other large venues, like the historic Shrine Auditorium, were often overrun by thousands of ST fans, many of whom wore costumes and spent entire weekends attending events. This was in the glory days of the Star Trek franchise, when new episodes of three of the most popular post-“original series” shows were still being broadcast on TV.

It’s been many years since I’ve attended a Star Trek convention. Nevertheless, my old fervor was piqued when I heard that the cast of Star Trek: the Next Generation (ST:TNG), my favorite of all the ST shows, was reuniting at a con in Burbank last weekend. Karen and I went.

We’d been to other fan conventions at the Burbank Marriott and so knew the space well. Still, we were surprised at how cramped everything was, despite the relatively small turnout (I’m guessing far less than 500 people). This almost felt like the cons of yore, except the merchandise was now selling for hundreds of dollars; plus the stars demanded a separate $20-$80 fee for every autograph and photo. Even Bobby Clark, one of the guys who played the cheesy Gorn monster on the original Star Trek series, had a booth and was selling photos and autograph opportunities. I stuck to shooting pictures of inanimate objects, like banners, but Karen managed to sneak a couple of good snaps of some of the celebrities. 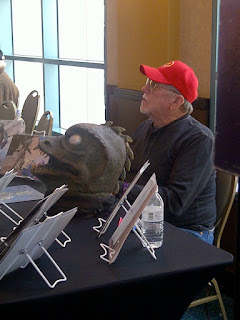 Bobby Clark with his Gorn head 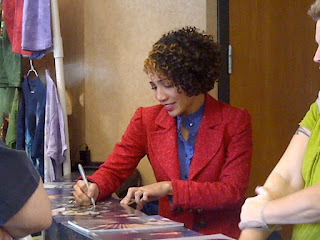 This was a science fiction convention (i.e., not exclusively Trek), so we got to see non-ST people, too, including Jasika Nicole (Astrid from our fave TV show, Fringe) and James Marsters (Spike from Buffy, the Vampire-Slayer). The highlight, though, was the TNG reunion, Saturday night, which (of course) required a separate admission fee. 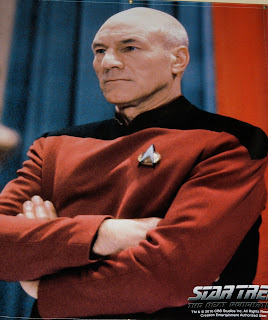 Unlike the crew of the original series, who almost all famously hated each other, the TNG cast members have remained good friends, even though the show went off the air nearly 20 years ago. There was a lot of good-natured on-stage bantering, as the stars answered questions from a moderator and then the audience. I’m no longer plugged into the ST universe, so was interested to learn that:

• Sir Patrick Stewart (Captain Picard) and his friend Sir Ian McKellen (Gandalf in the Lord of the Rings series)—both highly regarded Shakespearian actors—will be performing together in a Harold Pinter play later this year in a so-far-undisclosed theater in California (yay!)

• The two-part “The Best of Both Worlds,” one of the most acclaimed TNG episodes, is being released as a movie on DVD and will be shown in theaters on April 25 (already on my calendar!)

• Michael Dorn (Worf the Klingon) is now the sexy voice of Velveeta Cheese (!)

• And, according to Jonathan Frakes (who played Will Riker and is now one of TV’s leading directors), Paramount studio has absolutely no intention of reviving Star Trek as a TV show. Instead, they’re keeping the franchise alive through the new “re-boot” movies, the 2nd of which opens May 17 (definitely on my calendar!)

We were happy we went. But now I’m counting the days till May 17, when I’ll no doubt have to wait on line—just like the old days!—to see the new ST movie, Star Trek: Into Darkness. Check back on May 18 for my review! 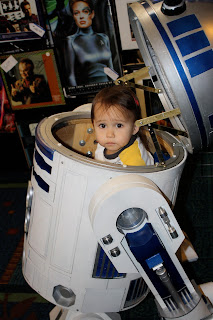 Star Wars in the house:
a self-propelled R2D2 operated by a small girl inside -
the best costume we saw all day!
Posted by Cyn at 5:39 PM No comments: 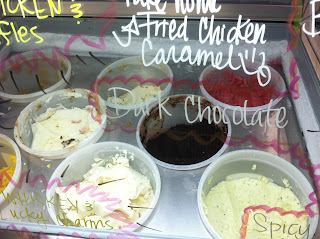 We all scream for ice scream

We’re not big fans of DIY, but we do love homemade ice cream. So Monday night we bundled up in our wool sweaters—yes, this has been an unusually cold winter (frost on our roof several mornings!)—and drove to Coolhaus, the hip ice cream store located in east Culver City’s art district. An ice-cream-making class was being offered through BlackboardEats, the online restaurant coupon service. It was the perfect marriage of Coolhaus and BlackboardEats, two of my favorite things.

What started as a refurbished food truck, Coolhaus is now a four-state phenomenon (Texas, Florida, and NY) that is HQ’d right here in Culver City.  Their custom flavors range from ginger molasses to peanut butter Captain Crunch and are usually served as an ice cream sandwich on hand-picked cookies, like butterscotch potato chip or just regular ol’ snickerdoodle. Last summer I had a persistent crave for Meyer lemon ice cream on flapjack (i.e., maple) cookies. Tim and I have since graduated to baked apple ice cream.

The Coolhaus store is tiny. And yet some thirty people managed to squeeze inside, Monday night, to learn how to make six of Coolhaus’ more interesting flavors, including fried chicken and waffles, whiskey Lucky Charms, balsamic fig and mascarpone, and brown butter candied bacon. Very trendy. We were, by far, the oldest people there.

First, the owners cooked-up some ice cream “base” (milk, heavy cream, egg yolks, and sugar). We then self-selected which flavor we wanted to make. Most people flocked to the more exotic flavors, but we only had eyes for baked apple. Following the owners’ recipes, each group added special ingredients (ours: apple sauce, cinnamon, brown sugar, nutmeg, clove, salt, and vanilla extract) to the base, which was then churned inside individual Cuisinart ice cream makers. We watched in fascination as our concoction slowly took the shape of ice cream. We were all encouraged to taste each other’s creations by dipping the end of long skinny sticks inside the ice cream makers (no double-dipping!). By the end of the night, the consensus was that baked apple was the best, though the bacon ice cream was damn good, too. 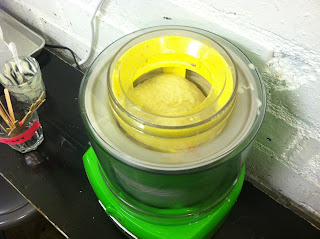 While we waited for our creations to harden, the staff brought out big tubs of real Coolhaus ice cream, which we then got to scoop into pint containers—an arduous task called “pinting.” After about 10 minutes, our hand-made ice creams emerged from the Coolhaus freezer in a semi-hardened state and we all descended like locusts—muy yummy!

The next day, Tim and I went straight to Williams Sonoma and bought our own Cuisinart ice cream maker. I see an ice-cream-making party in our near future. 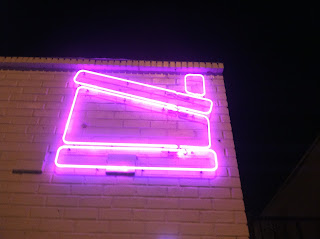 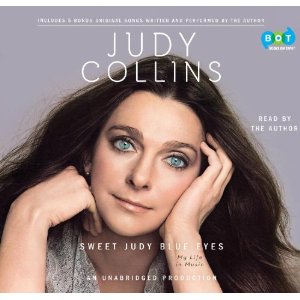 Home to the Doors, Buffalo Springfield, Linda Ronstadt, Jackson Browne, Joni Mitchell, and others, L.A. was the one of the dominant centers of the rock music universe in the late 1960s/early 1970s. Folksinger Judy Collins and her good friend and former lover, rock legend Stephen Stills, reminisced about those glory days at a Writer’s Bloc event, last night, at the Saban Theater.

Although Stills was billed as the interviewer, Collins took control immediately, surprising us all with a short rendition of her signature song, “Both Sides Now.” The audience joyfully sang along. At the end, Tim hugged me—we both had tears in our eyes.

Judy’s voice was as strong and as beautiful as ever; plus she looked just fabulous, with her long snow-white hair. Stephen Stills, on the other hand, looked grizzled and uncomfortable in his suit. Now nearly deaf, fifty years of rock-and-roll have not been as kind to him.

Collins told stories from her new autobiography, Sweet Judy Blue Eyes, the title of which is an homage to “Suite: Judy Blue Eyes,” the song Stills famously wrote about her when they were in love. He revealed that he developed a crush on her as soon as he saw her first album cover. “I must meet that girl!” he told his roommate and finally did when they made their first album together several years later. Collins then mentioned that the last time they performed together was in Florida at an AARP convention! The audience howled—probably because most of us are members. (I certainly am!)

Judy and Stephen answered several questions and then sang a folksong from their days in Greenwich Village—just two old friends and a guitar. It was wonderful.

Stephen and Judy, together again
Posted by Cyn at 5:10 PM 1 comment: