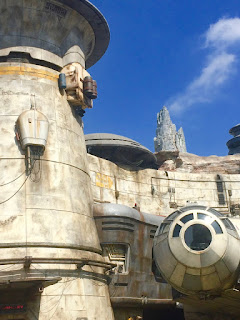 Batuu
Soon after announcing that Disneyland's new Star Wars land, Galaxy's Edge, would open this summer, Disney blocked current and retired employees from entering the parks for free. The main concern: overcrowding. But potential visitors, also fearing massive crowds, stayed away in droves. And so we were soon welcomed back with open arms. After all, employee money is better than no money at all!

We, of course, had been anticipating Galaxy's Edge since Disney's initial announcement in 2015. Though I worried that a Star Wars addition might take Disneyland far, far away from Walt's original vision, we nonetheless were anxious to see the new land and so went as soon as our passes were unblocked.

The setting of Galaxy's Edge is Black Spire Outpost on Batuu, a remote planet that has never appeared in a Star Wars movie. The evil Empire, which suspects the rebel alliance has taken hold of the outpost, is an ominous presence. Storm troopers are known to stop visitors and ask what they're doing there.

We entered Galaxy's Edge from the Fantasyland side and, after a short transition space, were immediately thrust into the world of Star Wars. The outpost is so unlike any other part of Disneyland that it's truly like being on another planet. In fact, it is impossible to see the rest of the park from Batuu. Nor is Batuu visible from the rest of the park. 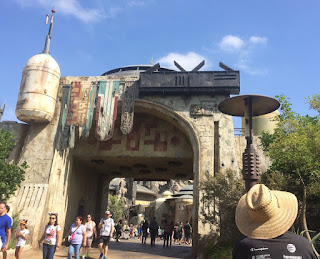 Our first view of Batuu (east entrance from Fantasyland) 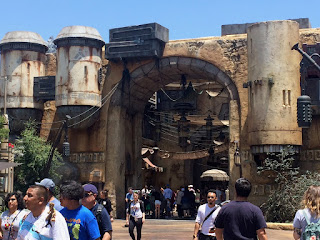 The ambiance is similar to a Middle Eastern marketplace: extremely visual and noisy. Though you can't see them, you can hear spaceships and land speeders taking off and landing throughout. Parked in the middle of everything is the Millennium Falcon, Han Solo's former ship and now home to Smuggler's Run, the outpost's only ride. (A second ride will open in January.) The Falcon is the most easily identifiable attraction in Batuu and is obviously a huge draw for fans. It looks so real, I could barely take my eyes off it! 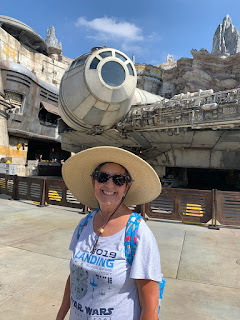 In front of the Falcon 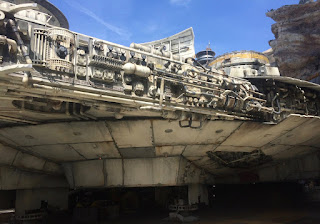 The Falcon: such attention to detail! 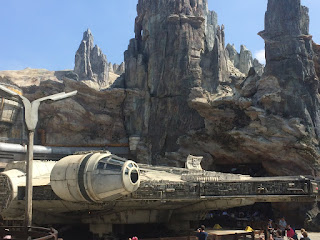 Surrounding the Falcon are mostly eateries and shops that, in some cases, seem more like Star Wars museums than stores. You can build your own version of R2D2 at Mubo's Droid Depot and your own lightsaber at Savi's secret workshop—but be discreet when asking where it is. You don't want to draw storm trooper attention. 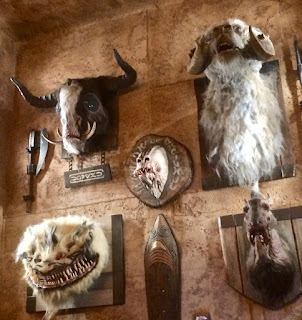 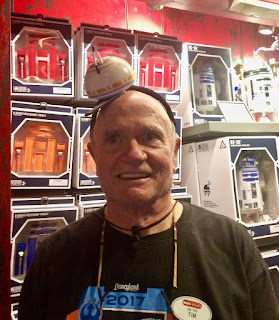 Tim being silly at the build-a-droid depot

One of the most popular spots is Oga's Cantina, where you can buy light refreshments and alcoholic beverages. Modeled after the cantina in the first Star Wars movie, the space is dark, loud and mysterious. The DJ is Rex, the robot from Disneyland's Star Tours ride, spinning tunes and spouting advice to the mostly distracted crowd. The snacks and drinks aren't cheap, but at least it's cool inside. Be sure to make a reservation as soon as you arrive in Batuu! 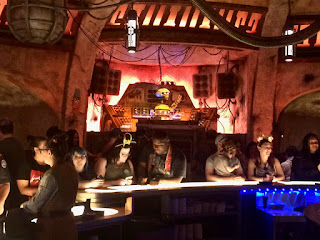 The bar at Oga's—DJ Rex, voiced by a very funny Paul Reubens,
in the background 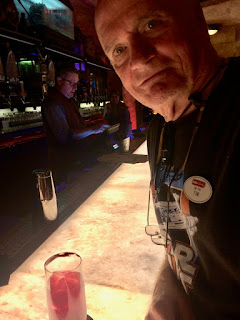 You can watch Disneyland's fireworks at night from Batuu, but don't expect to see any other hints of the park or Disney characters. The point here is to be totally immersed in another world. So far so good. 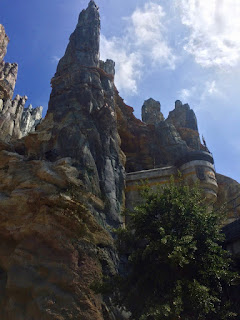 Black spire that gives the outpost its name 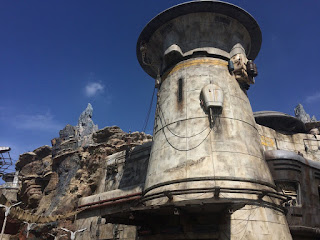 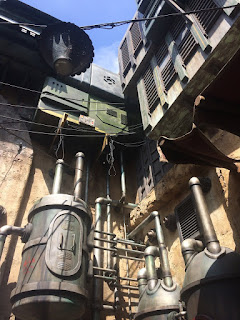 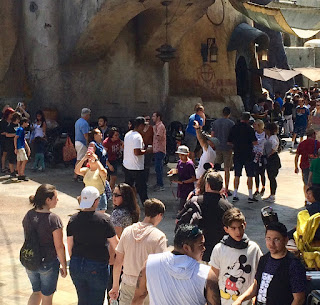 Modest crowds on a sunny Tuesday 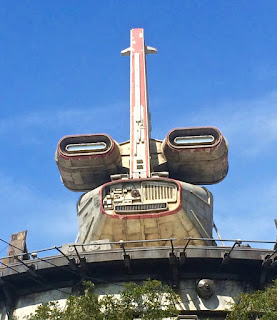 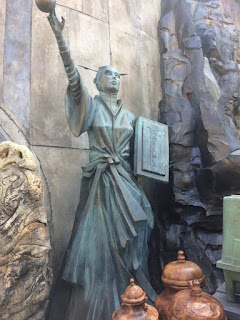 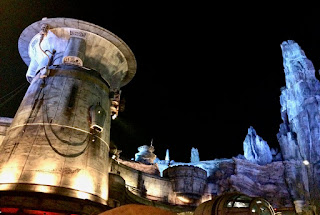 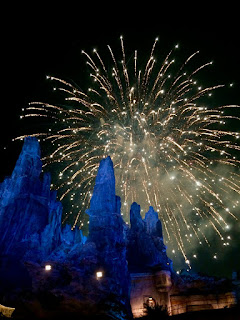 Fireworks over Black Spire
Posted by Cyn at 9:21 AM No comments: