Louis & Keely: Live at the Sahara 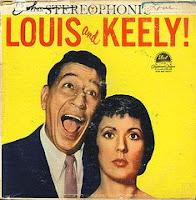 Like a lot of baby-boomers, Tim and I grew-up listening to American “standards” as well as rock ‘n roll. In fact, a shared love of Frank Sinatra was one of the things that drew us together. We’re also big fans of Bobby Darin (during his “Frank period”) and Louie Prima and Keely Smith, whom we remember seeing several times on the Ed Sullivan Show when we were kids.

Louie and Keely were the Sonny and Cher of their day. Not only did songwriter-singer Louie Prima marry a much younger woman (22 years his junior), he—like Sonny did with Cher—also helped make her into a legendary songstress. What was always most fascinating to me, though, was the way they interacted on stage. Louie was uncontrollable, leaping around the stage like a banshee, while Keely stood cool as a cucumber, refusing to be moved by his antics. Sonny and Cher imitated this schtick a decade later, but (even to my young eyes) never did it quite as well.

Last year, a play called Louis & Keely: Live at the Sahara opened to rave reviews at the Sacred Fools Theater in East Hollywood. We were too late to get tickets, but did see it when it moved to The Matrix on Melrose a few months later. We were totally blown away. Written and performed by Jake Broder and Vanessa Claire Smith, the play chronicles Louie and Keely’s relationship from the time they met to the end of their marriage. Smith is good as Keely; but it’s really Broder’s show as he sings, jumps and sweats his way through more than ten highly energetic songs. We were exhausted by the time we left the theater.

Though Tim isn’t much for repeat performances, he did eagerly agree to see the show again when it returned to L.A. two weeks ago. Now at the Geffen’s intimate Audrey Skirball Kenis Theater in Westwood, the play has been reworked (i.e., tightened) by Oscar-nominated director Taylor Hackford, who is also a big Louie and Keely fan. New characters have been added, including Sinatra, who plays a major role in the couple’s ultimate breakup. I didn’t think it was possible, but this revamped version is even better than the original.

So if you’re in the L.A. area and love the old Vegas singers of our youth, then I highly recommend grabbing tickets to Louis & Keely: Live at the Sahara. The play runs till April 26 and is well worth the price of admission.
Posted by Cyn at 3:21 PM 1 comment:

Eating Our Way Through Arizona 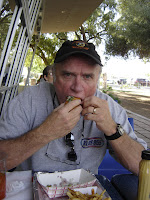 It’s March, so of course that means we spent last weekend in Arizona watching spring training baseball. As usual, we stayed at the Sheraton within walking distance of Diablo Stadium (over the I-10 freeway and through a cemetery), home of the Angels. The hotel’s food is adequate to sustain hungry baseball fans. But this year we decided to sample some of the local cuisine and so drove the six hours from L.A. to Phoenix so we wouldn’t have to rent a car. 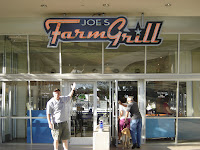 Our first stop was Joe’s Farm Grill, one of Guy Fieri’s featured spots on Diners, Drive-ins and Dives. Located in Gilbert, about 25 miles southeast of the hotel, the Grill was built in the shell of what used to be the farmhouse Joe Johnston, the owner, grew-up in during the 1960s. In keeping with the retro theme, Joe runs continuous-loop videos of one of my top childhood TV shows, Fireball XL5, in the bathroom, which is decorated with enshrined Barbies and GI-Joes.

If the food wasn’t so good, I could have easily spent the entire day in the bathroom watching TV, but didn’t. Instead I got a salad and Tim a hot dog with real potato French fries, which they serve without salt, if you ask. Heaven on earth!

The next morning, we tried to get into another Guy Fieri favorite, Matt’s Big Breakfast, in downtown Phoenix, but the wait was too long (20 people ahead of us!). So instead we headed over to The Waffle House, a national chain of greasy-spoon restaurants not available in Southern California. Despite the name, the best thing on the menu is the hash browns, which are served in a round patty in three different sizes (single, double and triple), with or without four different types of toppings! Like a fool, I got a plain single, but am already smackin’ my lips in anticipation of next year when I’m going to order a double serving smothered in onions. Talk about your morning wake-up call! 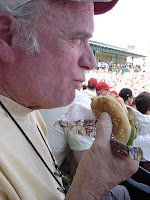 For lunch, we ate both days at the ballpark. Tim couldn’t get beyond his ubiquitous sausage hot dogs (b-o-o-o-ring!), but I ventured forth and discovered the machaca beef tacos. Though I stopped eating beef almost 20 years ago, I’m still a sucker for a good taco and so I was in my glory. Who cares about baseball when there are tasty tacos to eat? I have no idea who won the games.

We went to a movie Saturday night, followed by a quick meal at Johnny Rockets. Quite a comedown from the rest of our dining experiences. But then suddenly, at 8PM, the jukebox started blasting the Village People’s “YMCA” as the entire wait-staff dropped what they were doing and began dancing a choreographed routine! Afterward, I asked our otherwise mild-mannered server what the deal was. He told me they dance every half-hour. So if you’re ever shopping at the Arizona Mills mall in Tempe, run over to Johnny Rockets at the hour or half-hour to see the staff dance. They do a pretty mean boogaloo. 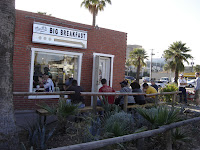 We drove home Sunday morning, but not without first eating breakfast at Matt’s. Even though we arrived before 7:30AM, there was still a bit of a line. Since there were only two of us, we were able to squeeze in ahead of several large parties. The restaurant is tiny, but the food is good. Tim had the salami scramble. The weekend had finally caught-up with me, however, so I just ordered oatmeal.* We were back on the road again by 8:15AM.

Lots more diners, drive-ins and dives to sample in the Phoenix area, so we can barely wait to return next year.

*If you follow this blog, you know I’ve been battling the ear disease Meniere’s for the past few months. This trip was the first big test of my newly regained health, though I’m still very careful about what I eat, especially in restaurants. Luckily, most places are willing to prepare certain foods without salt and there’s always the option of eating a salad without dressing. My ear and I passed the test without any serious side effects. I continue to cautiously edge my way back to normal.
Posted by Cyn at 4:51 PM No comments:

After more than a year of planning and 2+ months of physical labor pulling things together, the new KSPN radio station finally broadcast its first show on Monday. Here are a few photos to celebrate the big day! 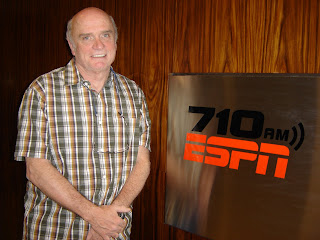 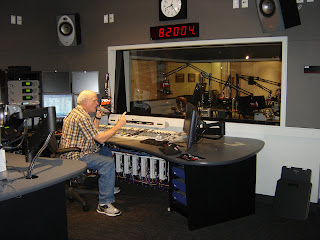 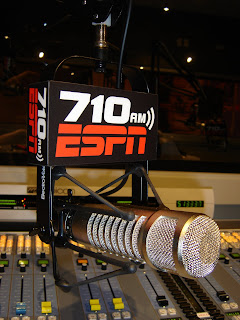 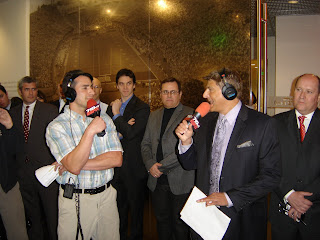 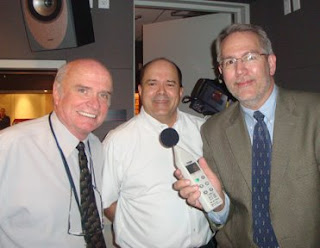 Kudos to the engineering staff!


Can you find Tim in the "grand opening" crowd below? 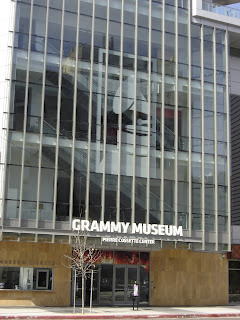 I just got back from spending three hours at the Grammy Museum and LOVED it, despite my previous brief but negative review. Yes, it’s no Rock and Roll Hall of Fame nor is it as dramatic as The Experience Music Project, but it’s wonderful nonetheless—especially when you get there at 10:00 on Sunday morning and have the place all to yourself!

The Museum is small—just three floors of exhibits and a lobby. The top floor provides an historical overview of, say, the past 80 years of popular music. Subsequent floors focus more on the Grammys themselves: memorable performances, filming the telecasts, charity events featuring Grammy winners, etc. There’s also an interesting display on how music is made, covering the perspectives of everyone from the artists (e.g., Robert Plant and Alison Krauss) to the studio musicians (e.g., the Wrecking Crew again!) to the producers (e.g., Phil Spector and Ahmet Ertegun). Finally, a handful of permanent exhibits talking about the cultural influence of protest music. 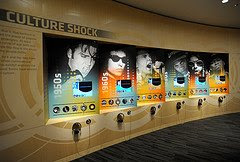 Although the Museum is currently showing a loaner collection of Michael Jackson’s more famous musical costumes—including an assortment of gloves—most of the exhibits are audio- or video-based: historic clips of Elvis, Frank Sinatra, Marvin Gaye, et al.; interviews with contemporary artists, who reveal, among other things, which groups most profoundly influenced their musical style (guess who was mentioned the most?—the Beatles, of course!); snippets of seminal tunes from some 50+ music genres (yes, even classical and folk); and more. Most moving to me was a duet by Carole King and James Taylor, singing “You’ve Got a Friend,” one of the most important songs of my young adulthood. Plus I loved the brief videos on the now famous “No Nukes” concert held in NYC in 1979 and the Dixie Chicks’ resurgence after being ostracized for publicly criticizing George Bush’s actions in Iraq. 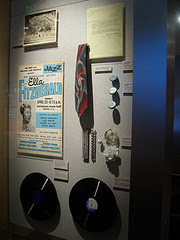 But the best thing of all—definitely worth the price of admission alone—was the huge screen on the third floor, showing many of the greatest Grammy moments over the years: Tina Turner singing “What’s Love Got to Do With It,” walking down an impossibly steep staircase in her trademark high heels and impossibly short mini-dress; Ella Fitzgerald and Mel Torme scat-singing to a jazz tune; a baldheaded Melissa Ethridge, channeling Janice Joplin, after surviving breast cancer; Louie Armstrong on trumpet; Count Basie on piano; and much, much more. I was hoping to see footage of George, Paul and Ringo’s reunion after John Lennon died, but decided it was time to go home after waiting an hour. Besides, I needed an excuse to return another Sunday when Tim could go with me.

If you love popular music and have a few hours to spare, I highly recommend a trip to the Grammy Museum in downtown’s new L.A. Live complex. I guarantee it will make you feel young again. 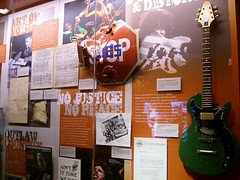