One of the best things about California elections is that big-name politicians inevitably come to Los Angeles to stump for their favorite candidates and causes. Former President Bill Clinton came to UCLA three weeks ago to support gubernatorial candidate Jerry Brown. President Obama appeared at USC the following week. Though I saw Obama back in April, I was too busy to see him and Clinton this time around. I did, however, make a point of getting a ticket to see Michelle Obama and vice president Joe Biden’s wife Jill earlier this week when they campaigned for Senator Barbara Boxer’s reelection.

The event was held at the historic Wilshire Ebell Theatre, not far from our house. Doors opened at 5PM, so I got there fifteen minutes early. The line (mostly women) was already around the block. It was an interesting group: young and old alike from all ethnic backgrounds. The woman standing next to me was a conspiracy theorist who, for much of our wait, described in great detail why she believes the Bush administration staged the 9/11 attacks. I just stood there and smiled.

Then there was the woman behind me who kept saying how excited she was to be there. I finally bit and engaged her in conversation.

“I’m excited, too,” I said. “I’ve seen the President before, but never the First Lady. I couldn’t pass up this opportunity.”

She then told me she had seen Condoleezza Rice speak the night before at the Saban theater, located in the heavily Democratic Beverly Hills area. “I was surprised there weren’t more people there,” she commented.

“Well, it was the westside,” I pointed out.

“Oh, yes!” she laughed. “Well, it was a good event anyway. Condoleezza told us about her childhood and was just fascinating, until she started talking about ‘weapons of mass destruction’ . . .”

“And then you started to roll your eyes,” I guessed.

While we were on line, several people with clipboards came around to check us in and give us our wristbands. There was a great deal of flurry about who got which color wristband. We decided the colors corresponded to the amount of money each person paid to attend. The conspiracist, who, like me, was given a blue band, insisted on a green wristband so she could sit with her friend. They apparently thought the green seats would be closer to the action. I didn’t care where I sat just as long as I got a seat. (I stood for four hours when I saw the President in August.)

It was every woman for herself when we got to security. And thank goodness, too, because my blue wristband entitled me to a 7th-row seat! I have no idea where the green wristbands ended-up.

I sat between a young volunteer from San Diego, who was working on the Boxer campaign, and a woman my age, who took notes throughout Michelle’s speech. At 6:30PM, the president of the Ebell of Los Angeles, a women’s philanthropic organization, gave a brief history of the theater. She was followed by the head of the local chapter of Organizing for America, Obama’s grassroots campaign group. It dawned on me then that this was more a recruitment event than it was a rally in support of Barbara Boxer. 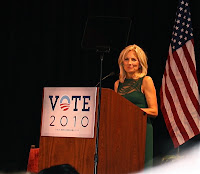 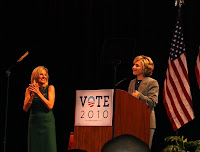 Rhythmn and blues artist Kenny “Babyface” Edmonds was next. I don’t know him, but the audience went wild, practically swooning at the sight of him. He sang a couple of songs and then (finally!) Dr. Jill Biden emerged, looking beautiful and energetic despite what must have been a very long day. She introduced her “good friend” Barbara Boxer, who enthusiastically spoke a while, before turning the stage over to the person we were all obviously there to see: Michelle Obama.

The First Lady is quite an imposing figure—extremely tall, athletic and confident. (Boxer, who is so short she famously stands on a box when she speaks, looked almost like a child next to her.) Michelle started her speech rather deliberately, talking about her family and calling herself “Mom-in-Chief.” She then spoke about the plight of other families in the country and how her husband is working to improve the state of the economy. The more she spoke, the more passionate she became, till the theater took on the air of a revival meeting. Individual audience members yelled out their approval. I’ve attended many political events in my time, but never one like this. Michelle Obama was, quite simply, amazing. In the end, the three women—Michelle, Jill and Barbara—embraced as the audience roared. I’m guessing lots of new volunteer campaigners were recruited by the time we left the theater.

Walking to my car, I suddenly spotted three SUVs, flashing lights and zipping across Wilshire Blvd.

“There she goes!” I yelled to a crowd of strangers standing on the corner.

We spontaneously burst into applause and waved good-bye. 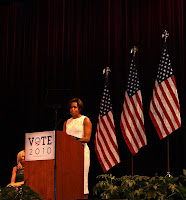