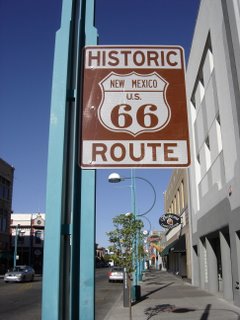 Like most of our out-of-state travel, last week’s trip to New Mexico was work-related. I was asked to attend a library e-learning (i.e., online teaching) conference in Albuquerque. Tim decided to go, too, since he’d never been to New Mexico. We arrived on Wednesday afternoon and returned home on Sunday.

The conference was held at the Hyatt Regency in downtown Albuquerque, so that’s where we stayed. Based on our experience in other cities—like Portland, Chicago, NYC, San Francisco, and even Sacramento—we opted not to rent a car, thinking there would be plenty for Tim to do within walking distance of the hotel. Boy, were we wrong! Not only was there nothing to do, but the only other people out on the street were conference-goers (librarians usually walking in pairs) and the homeless. Poor Tim was, therefore, pretty much stuck in the room while I was downstairs learning about electronic teaching. I did manage to break away for lunch on Friday and join him at Drew’s Dang Good Dogs, a new hot dog stand that was having its grand opening that very day. Apparently I was the only person in Albuquerque who doesn’t eat hot dogs because Tim waited an hour before placing his order. Was it worth the wait? I think the picture says it all! 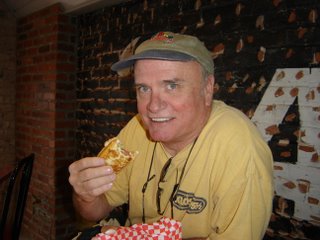 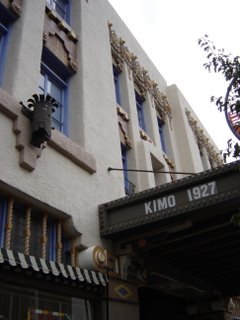 On the way back to the hotel, we noticed that the Kimo Theater was open. Recently renovated, the Kimo is a 1927 movie house and old vaudeville stage built in a fabulous “pueblo deco” architectural style. Happily, the public can visit for free on days when there are no rehearsals in progress, so we decided to take advantage even if it meant getting back to the conference a little late. The lobby was amazing—walls and stairways festooned in southwest murals and Native American artifacts. Every detail was just perfect. I could easily imagine how wonderful it must have been watching a movie or live stage show at the Kimo after driving for miles on old Route 66. This was truly the highlight of our trip. 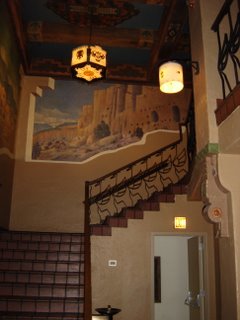 The first thing we did when we arrived in town was walk over to the main library to check our email. Although free at most libraries we’ve visited, Albuquerque charges three dollars for a “smartcard,” which enables the user to log onto the Internet and other online software in perpetuity—or at least until the technology changes! Like all the other displaced people in town, we spent a lot of time in the library checking email and various favorite websites. So it was no surprise that we found ourselves outside the library, Saturday morning, waiting to get in and use the computers. There I talked to a nice homeless man, who told us how to get to Old Town by bus and which bathrooms to use when we got there (!) He also advised us to get transfer tickets when we first boarded the bus because they allow riders to travel anywhere for free for up to two hours. (We did and he was right!) I also met a friendly woman who claimed to have a lawsuit pending in Los Angeles, where her husband fell down some stairs in front of McCormick & Schmick’s. I wished her luck as I slipped into the library.

After checking email one last time, we hopped the #66 bus to Old Town, the area’s earliest known Hispanic settlement (ca. 1700s). Today, of course, it is a huge tourist destination, where one can buy everything from mass-market sand sculptures to finely crafted jewelry and artwork. I had read about a fresh bakery that sounded particularly intriguing, and so spent an hour-and-a-half following my nose until we finally found the place. By then, most of the pastries were gone, but I did buy some homemade Mexican wedding cakes, which we are still savoring.

At Old Town, we hopped on the bus going east in hopes of finding the New Mexico State Fair. We’ve ridden mass transit in many towns from LA to NYC, but this ride was, by far, the most interesting. Unlike other buses, which seem to serve riders from all economic strata, the #66 provides transportation to mostly homeless and low income people. At one point, a young couple boarded with their newborn baby and my heart just about broke. The mother, who couldn’t have been more than sixteen years old, looked completely exhausted and miserable. She stared into space as the father, a young man possibly in his early twenties, folded up the stroller and got the baby’s things organized. Later, after they left, a pair of drunken women sat behind us and loudly laughed and cursed in three languages: English, Spanish and Native American. The bus took us along Route 66 (now Central NW), through downtown Albuquerque and points east, past the University of New Mexico, Nob Hill, and finally to the fairgrounds. I knew we had arrived because I could see the big ferris wheel in the distance, but the bus driver and riders all had differing opinions on where we should exit. Anxious to be on our way, we got off and headed north.

Well before we got there we could see the fairgrounds’ most famous attraction: the Slingshot, a bungee-cord type of ride that shoots strapped-in couples up over 250 feet in the air. Whether you’re horrified (me) or fascinated (Tim), it’s impossible to look away, so everyone entered the grounds with head craned upward in amazement.

Although only a quarter the size of LA County’s fair, the New Mexico State Fair was pure kitschy fun. We laughed at all the crazy food (deep-fried Oreos and meatloaf on a stick) and strolled by countless vendors selling their wacky wares. I then insisted that we visit the Hispanic Arts pavilion, chockfull of Day of the Dead skeletons and religious icons. Who knew St. Michael could slay his dragon in so many different and colorful ways?!

After walking around for two hours, we headed back over to Route 66, where we caught the bus downtown. Luckily we had just missed a onboard scuffle, which the driver and his passengers gleefully deconstructed throughout the entire ride.

Finally, back at the hotel, we decided to see a movie and so walked three blocks to the new cineplex across the street from the train station. (The concierge warned us not to walk over there at night). The ticket-taker, who used to live in LA, recognized the radio logo on Tim’s t-shirt. “Are those guys still on the air?” he asked incredulously. “Yes,” Tim answered and then told him that he works at the station. The ticket-taker was suitably impressed.

After the movie, we tried to get into the trendy new Brazilian restaurant right next door; but it was too crowded, so we headed down Central instead. Amazingly, there were cars everywhere, looking like a scene out of "American Graffiti"! All cruising stopped at nightfall, however, when the police—who were in full force—put up road blocks to keep traffic off Central. By now I was starving, so we ducked into The Carom Club, a nonsmoking billiards hall with a dress code and small, but upscale, restaurant. The food was good, but was certainly no Ford’s Filling Station. I was more than ready to return home...