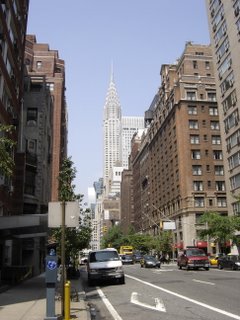 Of all the places we’ve traveled, New York City is always the most emotionally difficult to leave. Long after we’ve returned home, I imagine myself strolling through the concrete canyons of the east side or rushing along Times Square. Our small postwar house seems so quiet in comparison.

Like usual, last week’s trip to NYC was business-related. I had a conference Thursday night and Friday, so Tim and I flew in on Wednesday. Trying to save money, we took the A-train into town and got thoroughly confused when the A suddenly turned into an F-train in mid-transit due, according to a barely audible voice from above, to a “police investigation.” After riding around from one unrecognizable stop to the next, we finally found our way to Grand Central Terminal, where we happily emerged and walked four blocks to the Shelburne Hotel in Murray Hill (the brownstone building above on the right, with the Chrysler Building peeking over its shoulder). This was the third time in less than two years I had stayed at the Shelburne, so it felt like I was coming home.

Surprisingly, I was able to convince Tim to accompany me to “The Today Show” when we both woke up ridiculously early the next morning. Rarely great journalism, “The Today Show” nonetheless keeps me tuned into American culture as well as the day’s major headlines. Plus I like the people: hosts Matt Lauer and Meredith Viera, who replaced Katie Couric, weatherguy Al Roker, and newsgal Ann Curry. The network calls them “NBC’s First Family” and they genuinely seem to like each other.

Much of “The Today Show” is filmed outside (weather permitting), with the hosts actually mingling among the fans at the half-hours. It was 7:40AM when we left the hotel. I knew we’d probably miss the 8AM segment, but was hopeful we’d be on the air at 8:30AM. The morning was glorious: hazy but warm. Thank goodness I had packed a denim skirt and flip-flops! 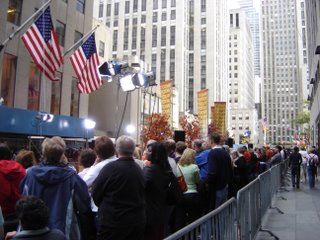 Racing through midtown Manhattan by foot during rush-hour was exhilarating—I felt like I was visiting the city for the first time. We arrived at Rockefeller Center by 8:05AM and quickly went in search of the show. Tucked behind the news studios was a crowd of people, corralled by banners, lights and a removable fence. We squeezed our way toward the studio door and waited for the hosts to appear. A fake backdrop of the Brooklyn Bridge shielded the area from passersby. Illinois Senator Barack Obama was being interviewed on several television screens affixed to the outside of the building. I saw Meredith, in a bright blue sweater, walk into the hall as soon as the interview ended. They were heading our way! 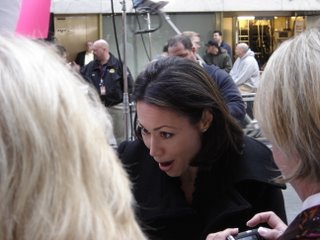 Ann Curry was the first to emerge. She made a beeline straight at us and then stopped to talk to an older woman celebrating her birthday. Meredith, Matt and Al straggled behind, waving to the crowd and talking among themselves. At one point, I remember Tim yelling, “Here comes the camera!,” so I looked up in a daze and waved. But mostly I was mesmerized by Ann Curry, who is stunningly beautiful and extremely gracious. Meredith, too, is much prettier in person than on TV and seemed to really enjoy chatting with the fans. Both she and Ann stayed and worked the crowd well after the segment. Matt, who looks older in person, had an in-studio interview and so quickly went back inside. Al just looked and acted like Al. I was absolutely thrilled to see my morning heroes. 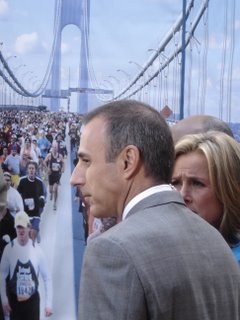 For lunch, we took the subway down to Little Italy, where we ate our favorite coal-flamed pizza at Lombardi’s. Opened in 1905, Lombardi’s claims to be NYC’s first pizzeria. It certainly epitomizes all the standard clichés: checkered tablecloths, autographed photos of Martin Scorsese on the wall, and Frank Sinatra singing overhead. But the pizza is anything but standard: cracker-thin crust with just the right amount of sauce and Mozzarella. Yum! From there, we went back north to Broadway, where we bought tickets for two plays: “Fame Becomes Me,” the one-person show starring comedian Martin Short, and “Butley” with Nathan Lane.

“See that guy over there,” he said, pointing toward the middle of Times Square. “He calls himself the Naked Cowboy. He’s famous.” 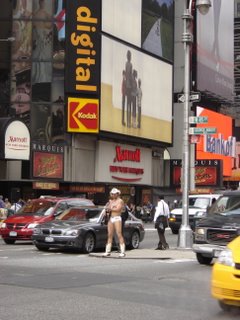 And sure enough, standing there was this tall, muscle-bound blonde, wearing nothing but a cowboy hat, boots, and a pair of white briefs with NAKED COWBOY stenciled on his behind. He was playing the guitar and posing for pictures as if it was the most natural thing in the world to stand around Times Square in one’s underwear. No wonder I love this city!

It was drizzling the next morning, so I donned my rain boots and ugly, but extremely practical, Kelty slicker before heading ten blocks north to the conference. It has rained or, worse yet, snowed every time I’ve been to NYC, so I came prepared! Tim spent his day wandering around Gramercy Park, where he lived for three weeks in 1985 while working on a job. The Gramercy Park Hotel, where we used to stay when it was the funky, rundown home to aging rock stars and hipsters, has since been renovated into multi-million-dollar condos, so Tim didn’t dare enter. Instead, he took the subway north and visited the Sony Wonder Technology Lab, where he got to see historic radio and television equipment—right up his alley. 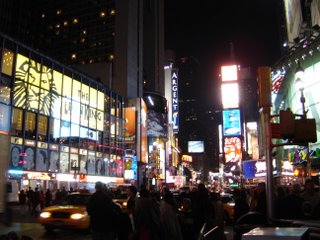 We returned to Broadway that night and laughed hysterically at Martin Short. The rain had stopped, so we walked back to the hotel. Times Square was ablaze in neon and tourists were out in full force, despite a chilly wind. Autumn had descended overnight.

I love Manhattan on the weekends—everything is much less frenetic. We had arranged to meet a former student, Stuart, at 11AM for brunch on the west side and so lounged around our apartment-sized hotel room (separate living room, bedroom, bathroom, and kitchen!) until it was time to leave.

After a tasty brunch at the charming “44 1/2” on Tenth Avenue, we returned to Rockefeller Center where, at Stuart’s urging, we bought tickets to tour the observation deck at the “Top of the Rock.” The view from seventy floors up was phenomenal, even for someone like me who fears heights. I may not be religious in any traditional sense of the word, but looking down from such a high perch, one has to believe that there is an ultimate order to the world. I was very moved. 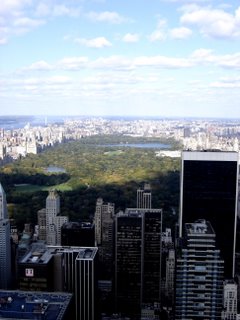 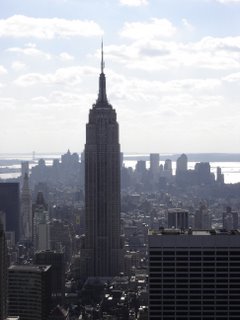 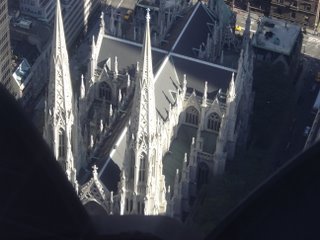 Back on the ground, we basked in all the activity surrounding Rockefeller Center. Skaters were enjoying the ice rink, which is installed every year in front of the signature gold statue of Prometheus. I caught a whiff of the holidays in the air and so bought NYC-themed Christmas cards and an ornament. Then I made Tim promise that we would return one December so we could spend the holidays in our second most favorite city. I quietly wished we didn’t have to fly back home the next morning . . . 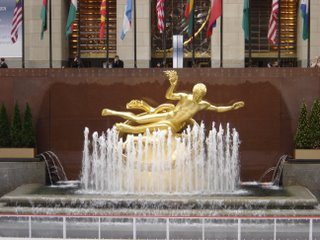